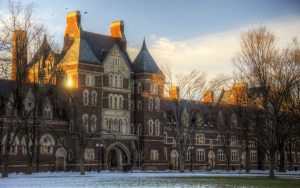 Designed by William Burges, follows a Neo Romanesque style building with medieval and post-medieval styles. It is located in Hartford, CT at the center of Trinity’s campus on long walk facing the main-quad. “Burges initially wanted Seabury to be built in a quadrangle fashion, but was forced to construct a long bar-like range, hence the name the long walk. Seabury Hall's beautiful silhouette now overlooks the green quad in the middle of campus.” Seabury Hall was built and named after Samuel Seabury. Seabury was a British loyalist who wrote open letters defending King George III and challenging Alexander Hamilton’s rising revolutionary rhetoric. Seabury was eventually imprisoned by the patriots for his views. He then later became loyal to the new American government and was consecrated as the first American Episcopal bishop and first bishop the Episcopal Church of Connecticut.The Long Walk was eventually named in Seabury’s honor and now houses the offices of the American Studies Department,

Seabury Hall was first utilized in many different forms. From teaching to learning, Trinity’s first chapel was located within Seabury Hall. “Originally, Seabury contained the Trinity's chapel. The former chapel room has since been renovated into a lecture room, maintaining the pews for student seating.”  Seabury Hall looks out towards the capital city of Hartford. It is apart of the historical long walk along with Jarvis. Both Jarvis and Seabury were constructed and built at the same time serving as the first educational and dormitory buildings on campus. Seabury is, “286 feet long, 35 feet wide, and three stories high, but each longitudinal expanse is broken by a central tower four stories tall and crowned with a double-peaked roof.” Due to its long and tall structure, Seabury Hall remains one of the most historical buildings within the Trinity community serving multiple purposes for the school.

Seabury Hall has constructed in a high victorian style with brownstone masonry displaying the Greek god iconic order in its detailing. The building was referred to as the college chapel during its first 20 years then transitioned into just Seabury hall. Seabury contains a number of classrooms, the post office, the union bookstore, the infirmary, faculty offices, a lounge for day students, and the rooms of the Tau alpha colony.