Joseph Chaplin was the first permanent settler of the former military township Virgil, NY. Chaplin built a log cabin for himself in lot 50 in 1792 while constructing a road. In 1793-94, Chaplin completed the 1st State Road. The road Chaplin built was about 60 miles long and made Virgil more accessible for new settlers and trade. This road is one of a few constructed by Chaplin during his lifetime, 1755-1812. The road extended Oxford to Ludlowville. The 1st State Road is important because it allowed for more settlers along the road and brought more business to towns. 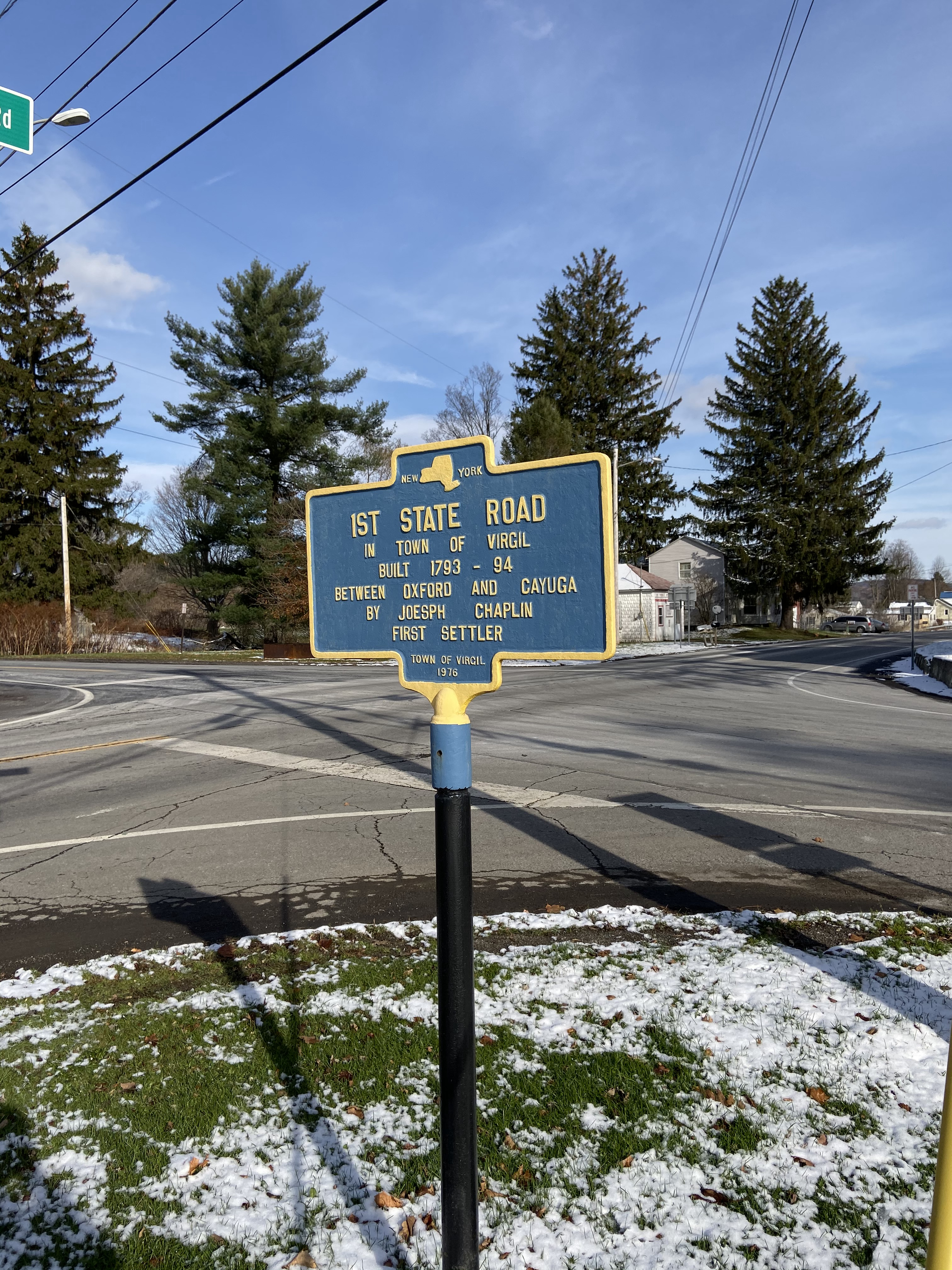 The first authorized road in the County was the Old State Road opened by Joseph Chaplin and finished as far as his contrast went in 1794. This road extended from Oxford to Ludlowville. At this time several roads had been opened through the northern part of what is now Onondaga County.

In 1796 $500.00 was appropriated from the first money coming into the hands of Surveyor General for the improvement of the roads of Cortland County.

In 1807 the "Seline and Chenango Turnpike Company" was incorporated by the Legislature. The company comprised Samuel Coe, Reuben Cross, Chauncy Hyde, Daniel Hudson, Elisha Alvord, Joseph Smith, Samuel Throubridge, Levi Bowen and John Ballard. The road was to run from Saline, through Onondaga, Tully, Homer, Virgil and Cincinnatus to Lisle and thence to Binghamton.

In May 1792, Joseph Chaplin was given the task of making a road, by Surveyor General, that would allow settlement of Cortland County. While surveying the land for the road, Chaplin came across lot 50 of Virgil and decided to call it home, making him the first settler of Virgil, New York. While building the road, the lot was not only the home of Joseph Chaplin, but a place where his workers could stop and rest. Chaplin spent most of 1792 exploring the route for the soon to be road, with a woman left to house keep at lot 50 in Virgil. The road was cleared between 1793-94, and the 1st State Road was established. Chaplin's road stretched from Oxford, in Chenango County, to the East shore of Cayuga Lake, equaling about 60 miles total. Building this road allowed for the settlement of other towns alongside the road, as well as more settlers to Virgil.

The 1st State Road, a distance of 60 miles, was of great importance to the early settlers. Over this highway through the wilderness, came the stage coach and horse drawn traffic from the east, bound for Auburn and the west. Joseph Chaplin was entrusted in this work. He spent an entire season exploring and surveying the route. In the next two years the work of cutting and clearing the road was done. In the winter of 1794, Chaplin moved his family and goods in six sleighs from Oxford over this road. This route extended from Oxford, Chenango County, to Ludlowville on the eastern shore of Cayuga Lake, coming into the county in the southeastern region. The road alson passed through Willett, along the north line of the present town of Marathon and Virgil.

There was a grist mill at Ludlowville before any were built in Cortland County, and the pioneer settlers went there for the grinding of their corn and wheat. At this time, several roads had been opened through the northern part of what is now Onondaga County. In 1796, $500 was appropriated from the first money into the hands of surveyor general for the improvement of the roads of Cortland County.

Within a few years after the opening of the state road across the northern end of the county, a road was opened from Port Watson to Solon, and at the same time several other roads were built in other sections of the county. However, the main road from Cortland to Virgil was not built until 1806.