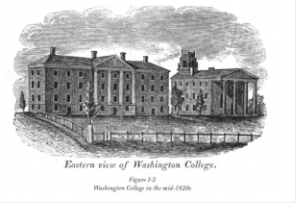 In 1845, the colleges name was changed from Washington College to Trinity College. In 1872, the trustees of Trinity College sold the downtown campus as the site for the new Connecticut State Capitol building. The cities of Hartford and New Haven had previously been dual state capitols of Connecticut, however, in 1869 the two capitol system was despised. This caused the two cities to compete for the role of the capitol. As Hartford was ambitious in achieving this goal, they offered the state a location in the center of their city for the new capitol building hoping this would heighten their change of earning the title. Hartford believed the location of Trinity College’s original campus was the ideal spot for this new building and therefore offered Trinity a $500,000 sum to relocate.

Trinity students and faculty were in opposition of the sale of the campus grounds, however, once the city increased the sum to $600,000 the college accepted the deal. Trinity was experiencing financial concerns at this time and secured the deal to ensure its future. The college was then moved to its current 100-acre Rocky Ridge location as the President wanted to have plenty of grounds to grow. The new campus consisted of two Roman revival-style buildings, Jarvis and Seabury Hall, these buildings can still be found on the campus today. Seabury Hall was a three story building that encompassed most of the college’s necessary departments, the chapel, library, recitation rooms, laboratory, mineralogical cabinet, and philosophical chambers. Jarvis was a four story building which housed the students and faculty. The new location of the campus can be found at 300 Summit Street Hartford, CT 06106.

The colleges premature aspirations to grow were successfully fulfilled with the larger location. In the late 1800’s and early 1900’s Trinity increases its number of highly credible faculty, expands its elective and core courses, doubles its library holdings, and broadens its enrollment size to 500. In 1969, the college even admits women for the first time which expands it enrollment to 1,800. Trinity is also committed to improving its relationship with its surrounding community To this end, Trinity helped create The Learning Corridor which includes schools, a child care center, a health and technology center, and Boys and Girls club.