Fort Ticonderoga was created by the French between 1755 and 1759 and originally named For Carillon. It was created to cover the portage between Lake George and Lake Champlain making it a very strategic position in the French and Indian war. It was also used during the American Revolution and is considered the location of "America's first victory" after Ethan Allen and Benedict Arnold captured the fort. The munitions that were taken from the fort were moved to Dorchester Heights which helped to lead to the British evacuating Boston in 1776. The Fort Switched hands again in 1777 after British General Burgoyne placed cannons on Mount Defiance overlooking Fort Ticonderoga and Mount Independence forcing an American retreat off the hill. 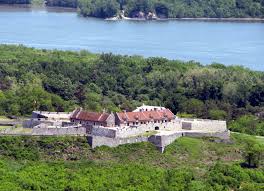 Picture of Fort Ticonderoga and its shape 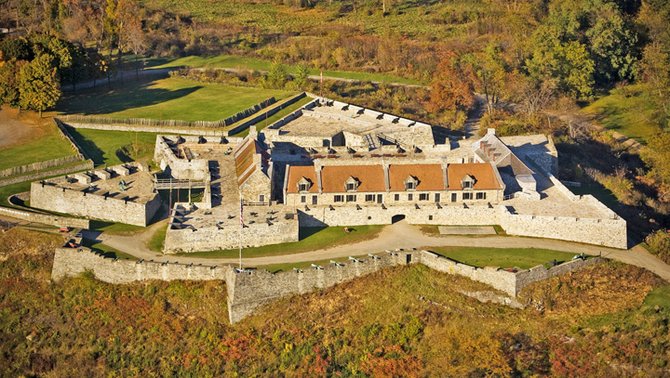 Fort Ticonderoga was created from 1755-1759 by Michel Chartier de Lotbiniere to cover portage between Lake George and Lake Champlain and protect them from British Fort St. Frederic.  During the French and Indian War this fort became a key strategic location because of its location on the Lakes.

After the Fort was taken by the Americans the munitions were then moved to Boston to assist in the Siege of Boston and the placements of the cannons helped to force the British out of Boston in 1776.  In 1776 the fort was also used to help outfit the first American Navy, which was created to help prevent British invasion from Canada.  Even though British won the Battle against the Navy the fort was deemed too strong and they didn't attempt to take it. (1) In 1777 the fort was taken by John Burgoyne a British General who placed cannons on Mount Defiance and forced the American Troops at Fort Ticonderoga and Mount Independence to evacuate and surrender the fort.  (2)