Situated in the working and middle-class neighborhood of Woodside, Queens, the Woodside Doughboy was built in 1923 to commemorate the brave local men who congregated in that very spot prior deployment to represent the United States of America in the Great War. The Woodside Doughboy resides in Doughboy Plaza, a 1.71 acre New York City park. [1][2] 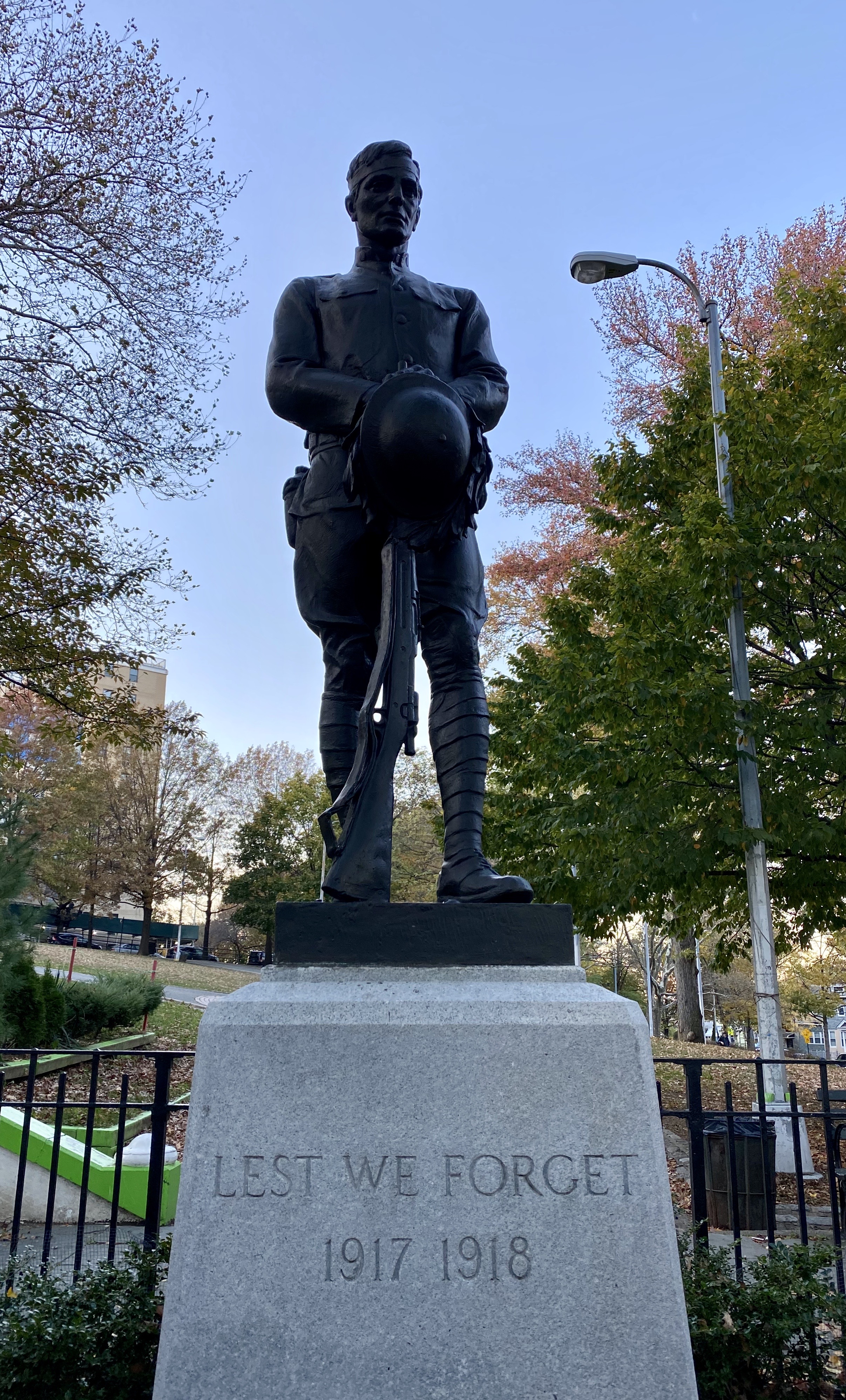 'Woodsiders who sacrificed their life in the line of duty during W.W.I.' 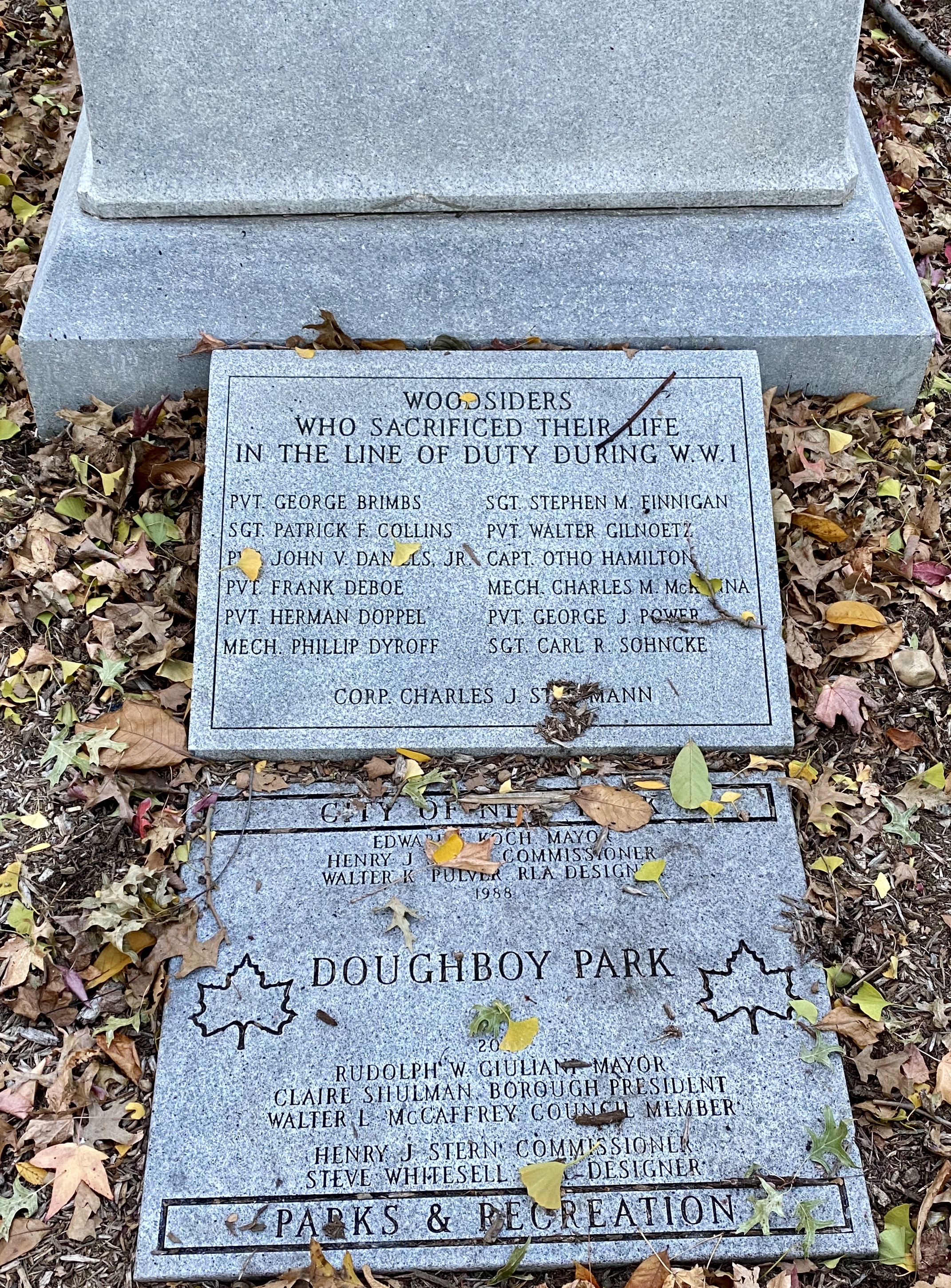 U.S. Participation in World War I 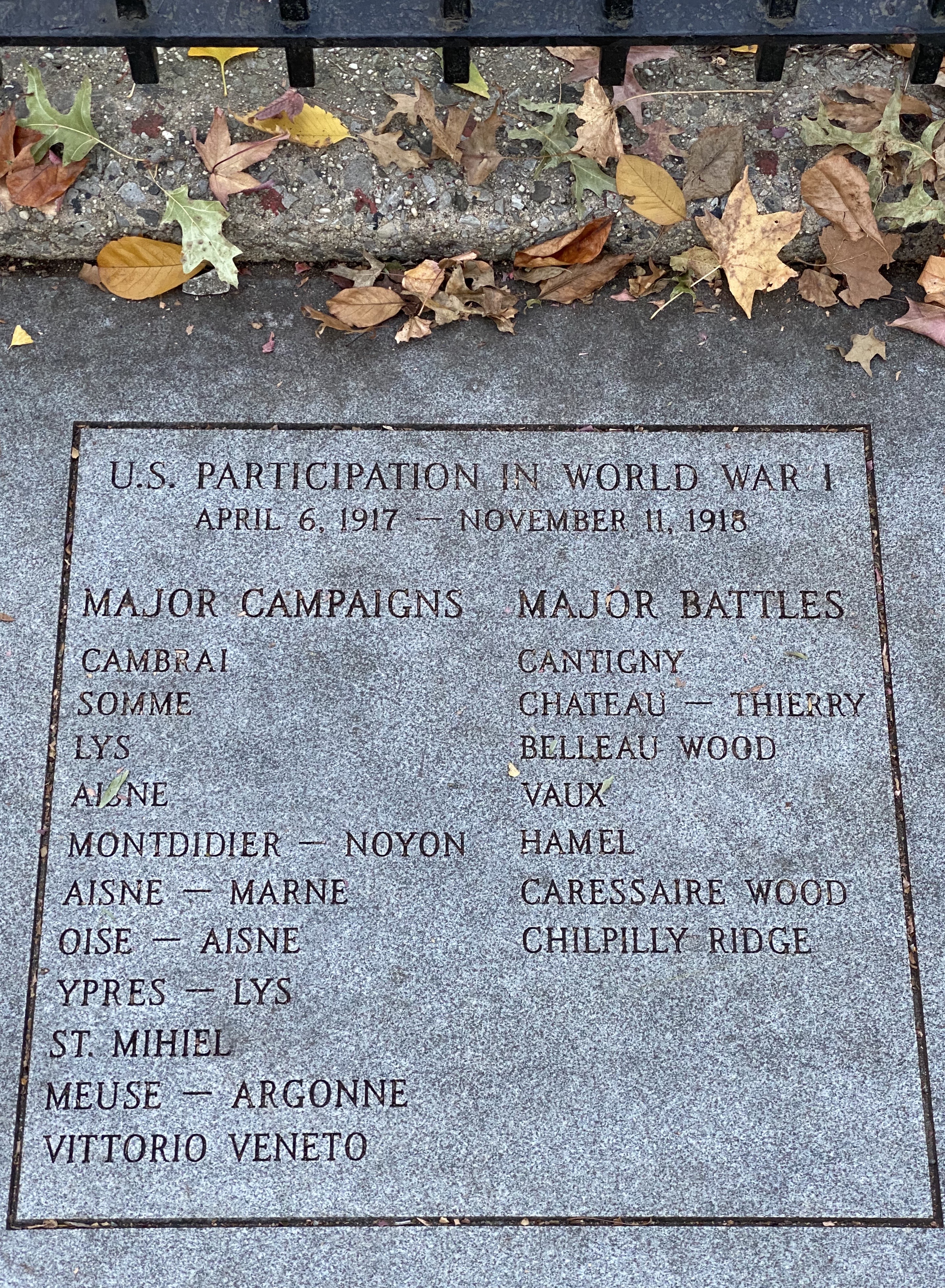 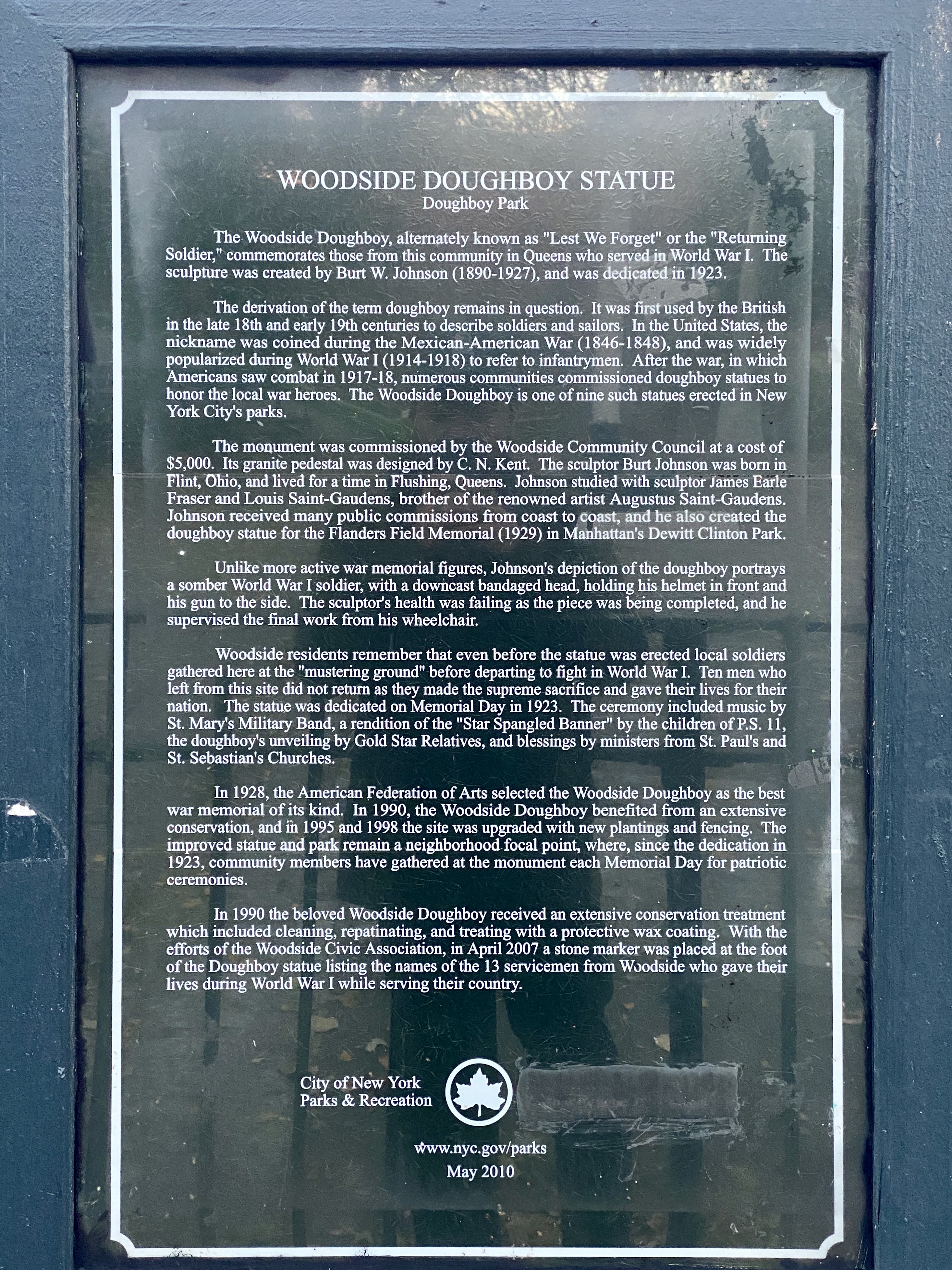 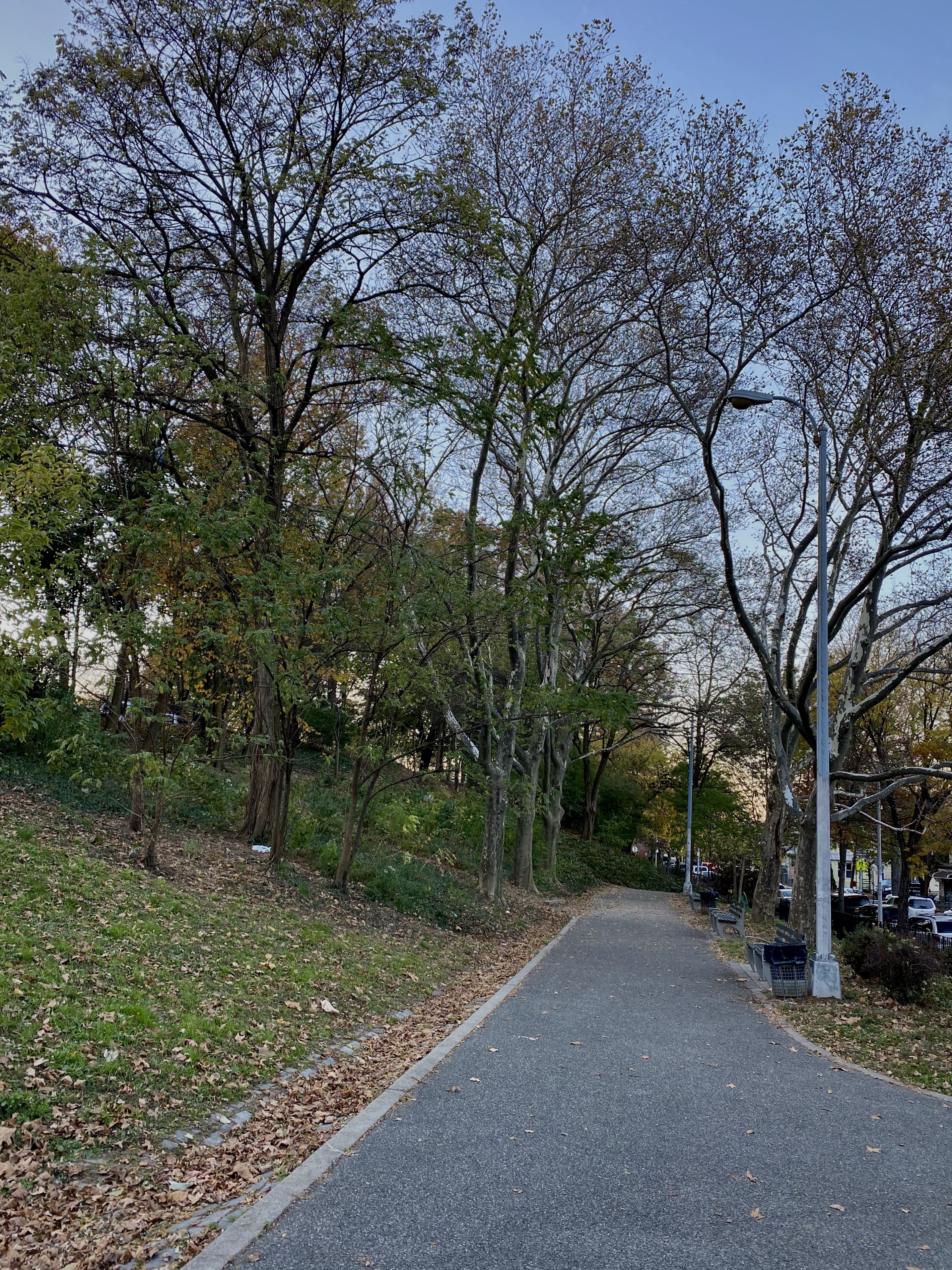 Originally named "The Returning Soldier", the Woodside Doughboy statue was designed by Burt W. Johnson and was dedicated on Memorial Day, May 30, 1923. The Woodside Community Council, at the time, paid $5000 to erect this monument for the local men who gave their lives to fight for the United States along side the Allied Powers in the Great War. "Lest We Forget 1917-1918" is engraved on a granite pedestal upon which a bandaged soldier is depicted returning from the overseas theater of war, tattered, tired and in a somber mood as presumably some of his battlefield brethren did not make return home alongside him. [2]

When the United States entered the Great War in 1917, a rush to enlist and deploy began. In Woodside, locals would congregate at the statues grounds prior to deployment. The names of local men who did not return home are memorialized below the statue, with their names engraved in a large stone slab. The Woodside Civic Association placed the names of the 13 fallen locals in April 2007. Of the 13 men, 10 gathered here before going off to war. The major campaigns fought by the United States are also memorialized in a large slab tile below the monument, an addition by New York City during a renovation project in 2001. The usage of World War I on both stones will date their placement past 1923. [3]

While the origin of the name 'doughboy' is hazy with many uses prior to our current understanding, the name is representative of the typical Great War soldier who was generally young and heroic, eager to take on the Central Power enemies and prove themselves on the battlefield. "Bravery bordering on recklessness" is oft associated with memorialized representations of American soldiers, so the imagery of this soldier returning home in bandages gives us a glimpse of the grim reality of war. Approximately 800 World War I sculptures were made, with 65% of those being soldiers, and only 5% representing a wounded figure. "Lest We Forget", the sacrifices many have made for our country. [4]