The Peter Herdic House, located at 407 West Fourth Street, Williamsport, Lycoming County, Pennsylvania, is one of the oldest surviving homes in the city. Lumber tycoon, Peter Herdic, settled in Williamsport amidst the lumber boom, and built one of the first grand houses on Millionaire's Row. Millionaire's Row, West Fourth Street, housed the wealthiest families and businessmen of the era. Through preservation, restoration, and renovation efforts, the home presently stands.Today, the home resides as the Peter Herdic House Restaurant. It accommodates as a hotel and wedding venue, as well as a conference place. The Miele-Wood-Elion family has transformed a portion of the historic home into a fine dining experience. 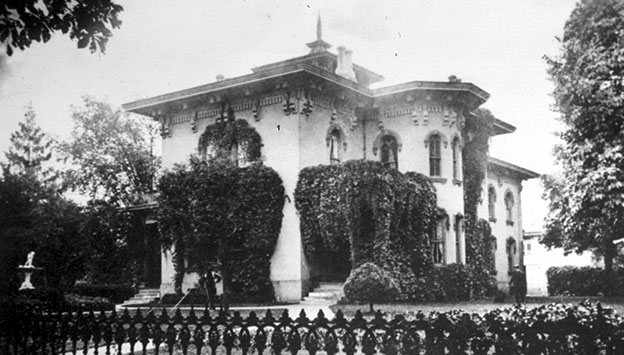 The Peter Herdic House is located at 407 West Fourth Street, Williamsport, Lycoming County, Pennsylvania. Peter Herdic (1824-1888), was a lumber baron, businessman, philanthropist, millionaire, and former mayor of Williamsport, Pennsylvania. Herdic claimed residency in Williamsport in 1853, and was one of many lumber tycoons residing in Williamsport, specifically on West Fourth Street. The dense forests surrounding Williamsport area were ideal for the booming lumber industry. He purchased a stake into the Susquehanna Boom Company, and grew his lumber business steadily between 1853-1855. PeterHerdic commissioned New York architect, Eber Culver to design his home in 1855. Culver began building the home in 1858. This stretch of 19th century mansions became known as Millionaire’s Row, referring to the millionaire’s per capita and residency in a single town. Culver built the historic Herdic House using elaborate, Victorian villa architectural styles. The wood throughout the home is hand-carved, including a winding mahogany staircase. The home features a walk-in cupola, expansive archways, bay windows, and ornate plaster moldings; outside boasts wrought iron fences, porch columns and carefully kept shrubbery.

The extravagant, four-story mansion was opened to the public in 1865. It embodied all aspects of wealth, power, and aristocracy. The sheer size of the home massive, able to accommodate some seven hundred guests at a time. The front exterior housed an enclosed deer park, and the back adjoined a private, Pennsylvania State railroad. By the grand opening, Peter Herdic had invested $225,000 into the mansion. Herdic lived mostly prosperously for the remainder of his life. Business peaked for Herdic in the 1870’s, and the economy peaked in Williamsport in the 1880’s. In 1888, Peter Herdic had passed away and in the following years, natural and manmade disasters decimated the lumber industry in Lycoming County. Flooding an excessive deforestation eventually ceased the log trade.

Herdic’s widow, Ernice, sold the home in 1890, and it was passed between renters and owners as personal residences until the 1960’s, when it became apartments and office buildings. The building also supported a television repair station. In February of 1977, the Herdic House unexpectedly caught fire, trapping and killing one man in the blaze. The fire caused extensive damage to the interior and exterior of the home. The following year, the Peter Herdic House was added to the National Register of Historical Places; the United States government in turn funded preservation projects for these historical places. In 1979, the Millionaire’s Row Historical Homes Incorporated, an organization under the leadership of Margaret Young, purchased the property for under $30,000. The organization restored and renovated the home over a three year period, and placed it back on the real estate market for slightly over $42,000 in 1982. The organization spent more than $125,000 to ensure the authenticity of the home’s restorations. The restorations and renovations included the replacement and replication of stylistic and structural details featured in the original home. The organization had trouble finding an eager and suitable buyer for the property post-restoration.

The Peter Herdic Partnership acquired the home  in 1983, and partnered with the Lundy Construction Company, who assisted in the building’s restoration and renovation efforts. Alongside the restoration, sisters Gloria and Marcia Miele began opening their family-oriented restaurant in the home. They were dedicated to showcasing the importance of historical preservation alongside their restaurant business. Three generations of the Miele family work within and cater to the home. The United States Department of Interior governmentally funded the preservation efforts of the historic home. Richard Lundy, head of Lundy Construction Company, and Thomas Richey, manager of the Peter Herdic Partnership, heavily considered the capacity to which reproducing aspects of the home would entail. While some features of the home had been poorly taken care of, or lost in previous preservation efforts, others were used to reproduce matching, replacement pieces. The entirety of the first floor had been turned into a restaurant space, while the second-floor hosts business meetings, wedding receptions, and parties. The Miele sisters chose to display historical items such as Herdic House Restaurant menus in the former Park Hotel from the 1870’s, as well as ledgers and checks referencing Herdic’s early transportation patents. All restorations under the Lundy Construction Company and the Peter Herdic Partnership were completed between 1983 and 1984. Richard Lundy and the partnership were awarded the 1985 Preservation Award, given by Pennsylvania’s Bureau of Historic Preservation, directed by Donna Williams. This accolade is given to a project that sets the standard for preservation of historical structures in Pennsylvania- a state that has, “the nation's largest concentration of preservation projects.” The preservation project cost an estimated $350,000 upon completion. Today, the home stands as the Peter Herdic House Restaurant. It accommodates as a hotel and wedding venue, as well as a conference place. The Miele-Wood-Elion family still own the home.

The Peter Herdic House is significant to Williamsport’s history, as it is one of the oldest historic homes dating back to the lumber boom. The house shows the progression and evolution of public history and preservation efforts. It also highlights the importance of continuing preservation efforts for the education and enjoyment of future generations. The Peter Herdic House Restaurant is currently open to the public in Millionaire's Row Historic district.