Igor Fokin Memorial was erected in 2001. In 1993, Fokin moved to Cambridge from St. Petersburg because of the political conflict. The dissolution of the Soviet Union that began during 1991 resulted in coups and conflicts between different political groups. Fokin devoted his life to putting on shows in One Battle Square. The memorial features Fokin's and the crowd's favorite puppet: "Doo-Doo". The sudden death of Fokin resulted in having a memorial made with the purpose of immortalizing his legacy. 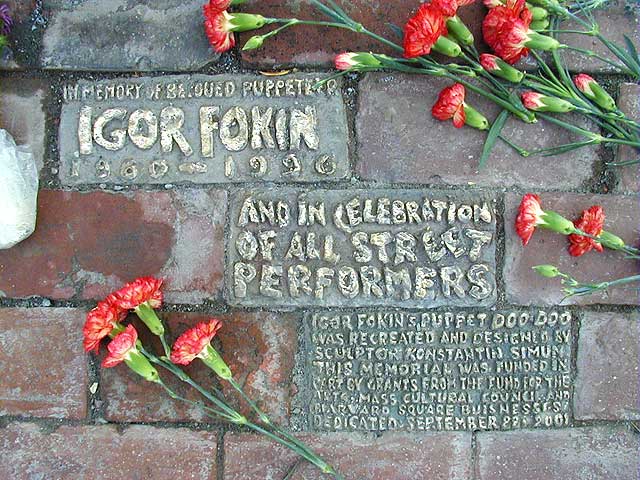 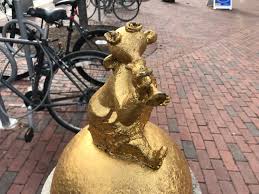 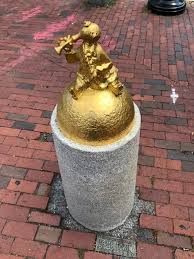 Fokin went to the St. Petersburg Theatrical Institute and studied theater design during his time in the Soviet Union. The reason he left Russia was due to the Communism regime that banned street art. The dissolution of the Soviet Union started in 1991 caused political and social conflicts in the country. A 1991 a coup attempted in order to oust Mikhail Gorbachev, who was the general secretary of the Communist Party. The violent outcomes of the coup, including a suicide, resulted in the establishment of temporary restrictions, including a ban on street art that forced Fokin to do his work underground and eventually to move to the United States to find freedom for his street art.

He came to the United States with only a couple of handmade puppets in 1993. He was joined by a theatre troupe on his journey to Cambridge. He constituted the one-man Wooden Horse Puppet Theatre, which is what he called the show that he put on. With the money he made from his daily shows in his so-called Puppet Theatre, he managed to support his wife and children.

After Igor Fokin’s unexpected death other street performers participated in shows at night to gather money which they gave to Fokin’s wife to support their family. This act gathered attention from people after a statue was erected at the spot where he always performed to always remember the positive influence he had on everyone who had a chance to watch him.

The most important puppet is "Doo-Doo" who was Fokin's and the crowd's favorite ("Wooden Horse" puppet theater (by Igor Fokin) - Symphony of Strings., 00:4:00-00:4:17). The memorial made is of "Doo-Doo". The puppet was created after a famous Russian story about a flute player who travels the world. In his act “Doo-Doo” plays his nose, which amuses the audience. The sculptor of the memorial Konstantin Simun, who is also from St. Petersburg, describes the process of making the sculpture in an interview as “It was important to make that chunk of bronze come to life, with personality.”.

The sculpture mold was made first from plasticine clay and then bronze metal was poured into the mold to create the final product."Doo-Doo" is captured as pretending his nose is an instrument. It is located in the middle of the square.

The memorial overall is memorializing a person who immigrated from a country, in which the conditions were tough for an artist, and managed to gather an audience in a country he came for the first time. During his time alive, how entertaining he was for people affected peoples lives. His usual audience got used to seeing him everyday at the same spot, thus when he passed away suddenly they felt a need to memorialize his once presence (The Puppeteer Film with Igor Fokin, 00:28:10- 00:28:29). For the people it was a routine that was lost from everywhere except their memory.