Birthplace of Francis B. Carpenter

Francis Bicknell Carpenter was born on August 6, 1830 in a family of farmers. He was one of nine children to Asaph H. and Almira Clark Carpenter. He is famously known as an oil painter and author. He painted portraits of Presidents Abraham Lincoln, Millard Fillmore, John Tyler, James A. Garfield, and Franklin Pierce. He is famously known for his painting "First Reading of the Emancipation Proclamation By President Lincoln," which currently hangs on the main wall over the staircase of the Capitol Building. He died on May 23, 1900. 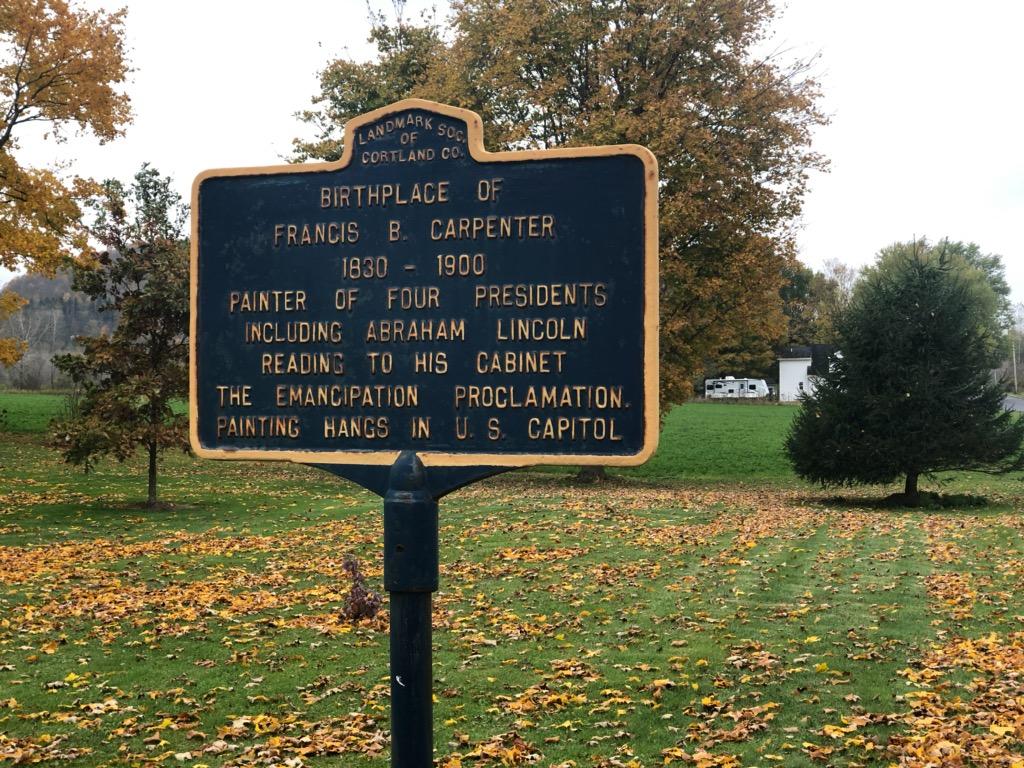 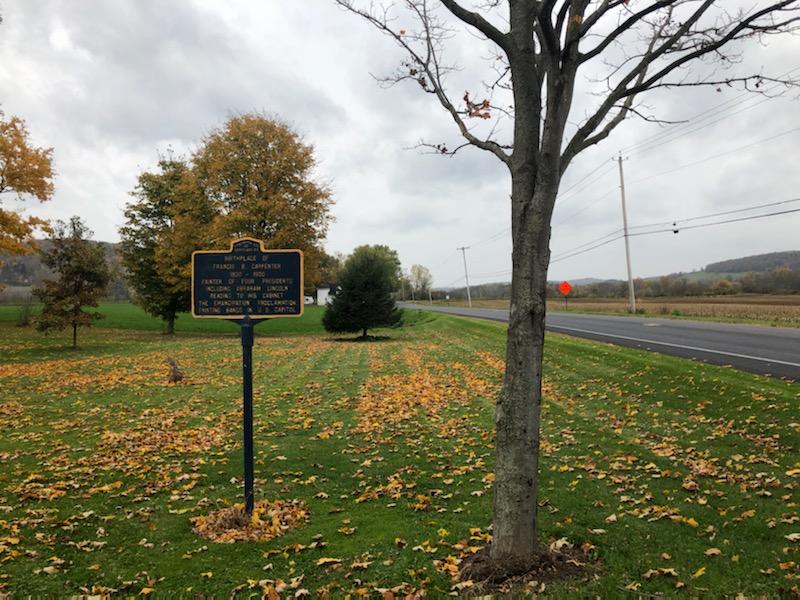 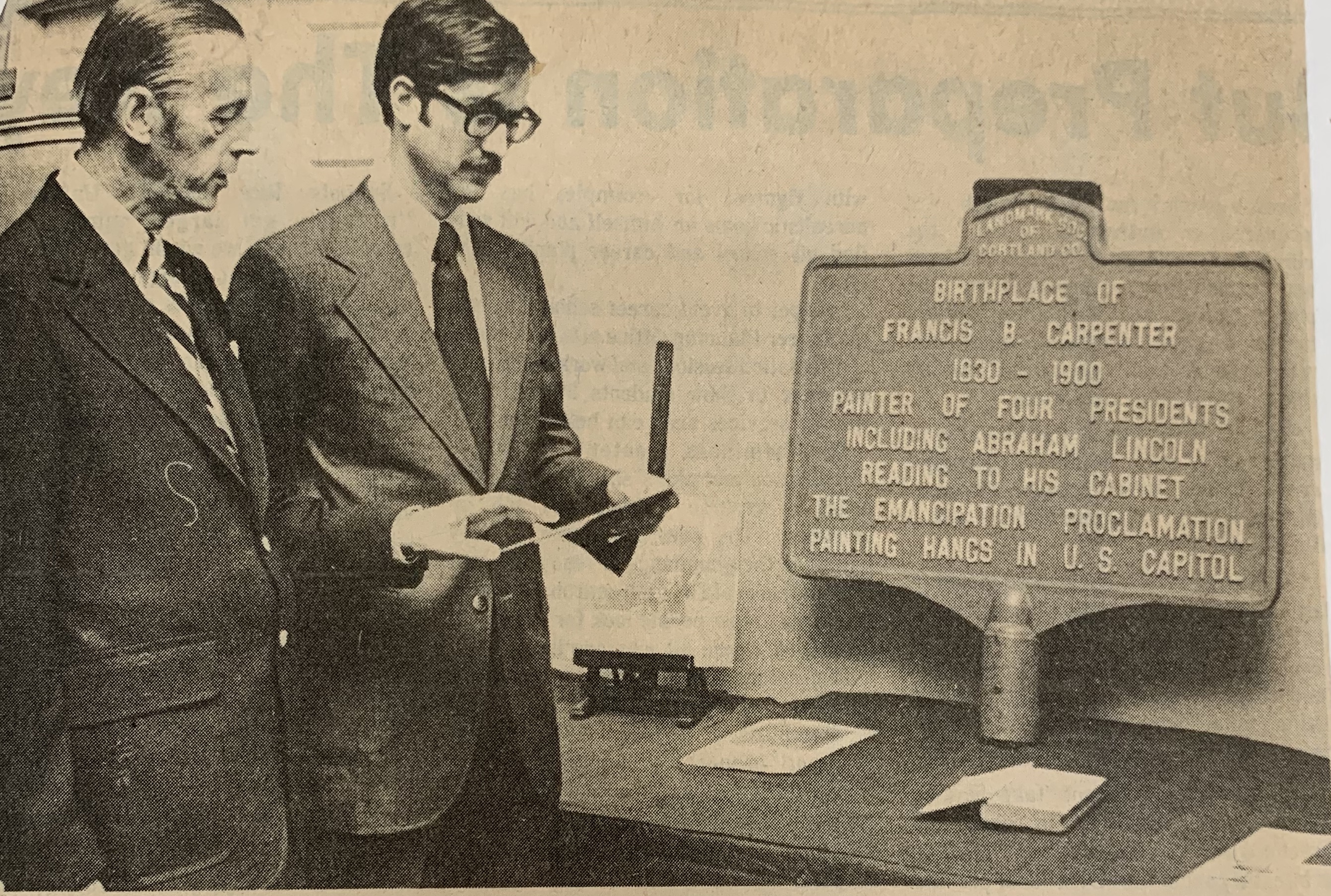 First Reading of the Emancipation Proclamation by President Lincoln 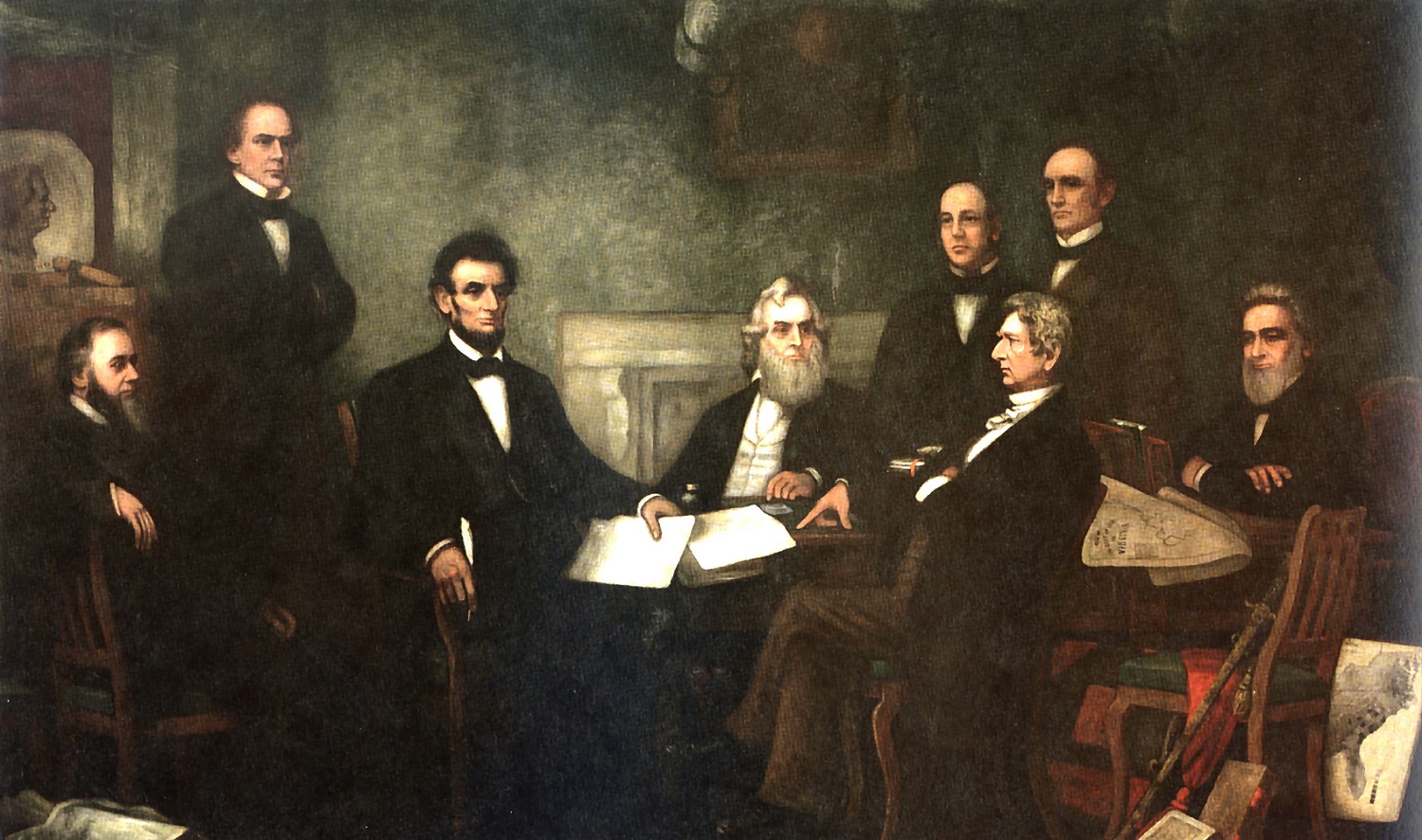 Francis Bicknell Carpenter was born on August 6, 1830 in a family of farmers. He was one of nine children to Asaph H. and Almira Clark Carpenter. Francis always loved painting his entire life and was self taught. His parents wanted him to be a farmer and not a painter. However, when one of his portraits impressed his mother, he was allowed to study under Sanford Thayer of Syracuse in 1844. Two years later when Carpenter was sixteen years old, he opened his own painting studio in Homer. Carpenter is famously known for his oil painting portraits. While in Homer, he painted nine of the original trustees of Cortland Academy. He also painted professors Goldwin Smith, James Russell Lowell, and George W. Curtis. He was also asked to paint the president of the Library of Cornell, President White.

Carpenter's fame arose when he began as a sign painter, which was difficult to find at the time. Jedediah Barber was a merchant in Homer who hired him to paint a sign for his store, Great Western. Barber was liked by all in the town, often regarded as "Homer's patron saint." Had Carpenter not painted this store sign, he never would have become famous.

After Carpenter's store sign became famous around town, the word spread that he also made oil paintings of those in the town. He was comissioned to make portraits many United States officials, including governors Myron H. Clark, William L. Marry, and William Seward, who later became Lincoln's Secretary of State. Carpenter also painted presidents Franklin Pierce, Millard Filmore, John Tyler, James A. Garfield, and Abraham Lincoln. Many loved the way Carpenter painted Lincoln. In fact, Carpenter painted sixteen portraits of him.

After reading Lincoln's Emancipation Proclamation, Carpenter was moved. He began painting Lincoln first reading the proclamation to his cabinet. While sketching, he asked Owen Lovejoy, an Illinois representative, if he could paint Lincoln in person. He was invited to live in the White House in 1864 to complete his painting. The painting, "First Reading of the Emancipation Proclamation By President Lincoln" is regarded by many as his magnum opus. It is fourteen feet and six inches by nine feet. This painting now remains in the United States Capitol Building. Carpenter painted more presidential portraits than any other artist. He died on May 23, 1900.

In 1977, the Landmark Society of Cortland wanted markers placed in Homer for three men who were greatly involved in Lincoln's life. The first being William O. Stoddard, who was Lincoln's secretary and first person to nominate him for the presidency. The second marker was for Eli De Voe, who was a member of the secret service who foiled an assassination plot against the president. The final marker was for Francis Bicknell Carpenter.