Hume School was constructed in 1891 and is named for a local businessman and Civil War veteran, Frank Hume. The school served local public school students until it closed in 1958. The newly-formed Arlington Historical Society (AHS) bought the building and saved it from development. The towering brick structure has served as the Arlington Historical Museum since 1963. The school was on a 1/4-acre lot in 1900 but the AHS owns about one acre, saving an adjacent lot from being developed. The museum is currently open three afternoons per week. The school building is significant in its architectural style and for trends in educational structures and was designated an Arlington County landmark in 1978. Hume School was listed on the National Register of Historic Places in 1979.

2010 photo of west (main) and south facades of Hume School 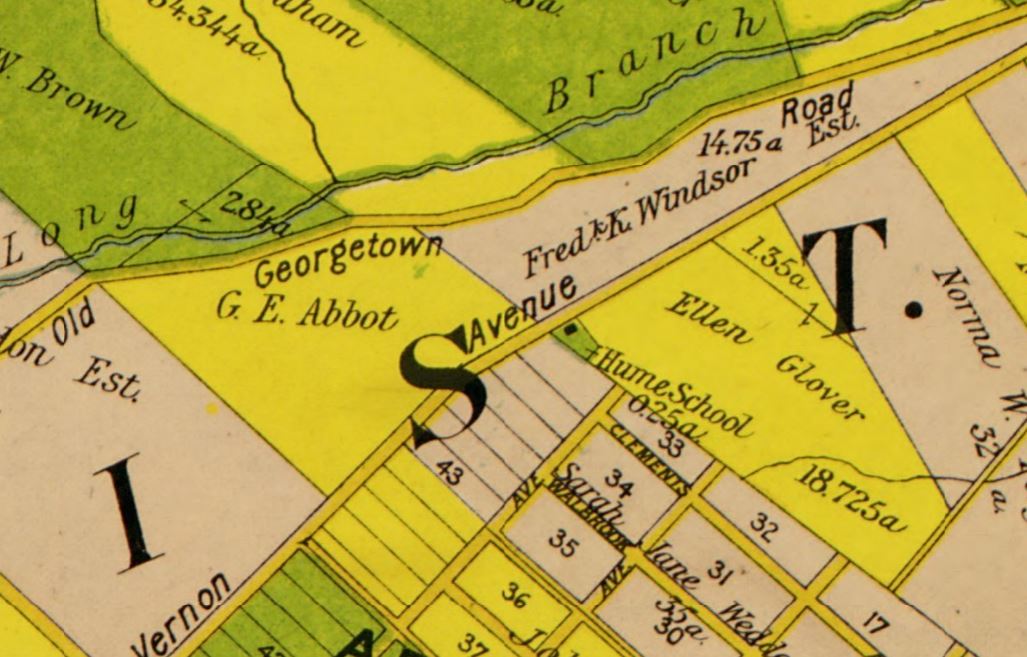 Illustration of Mr. Frank Hume, Candidate for House of Delegates from Alexandria 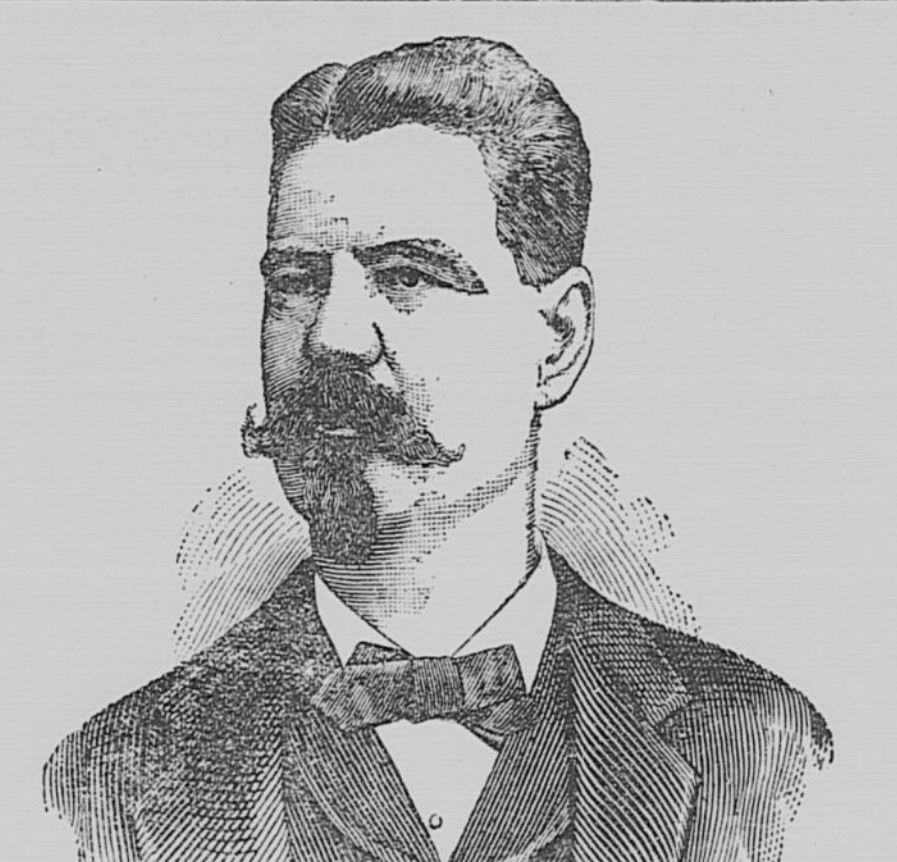 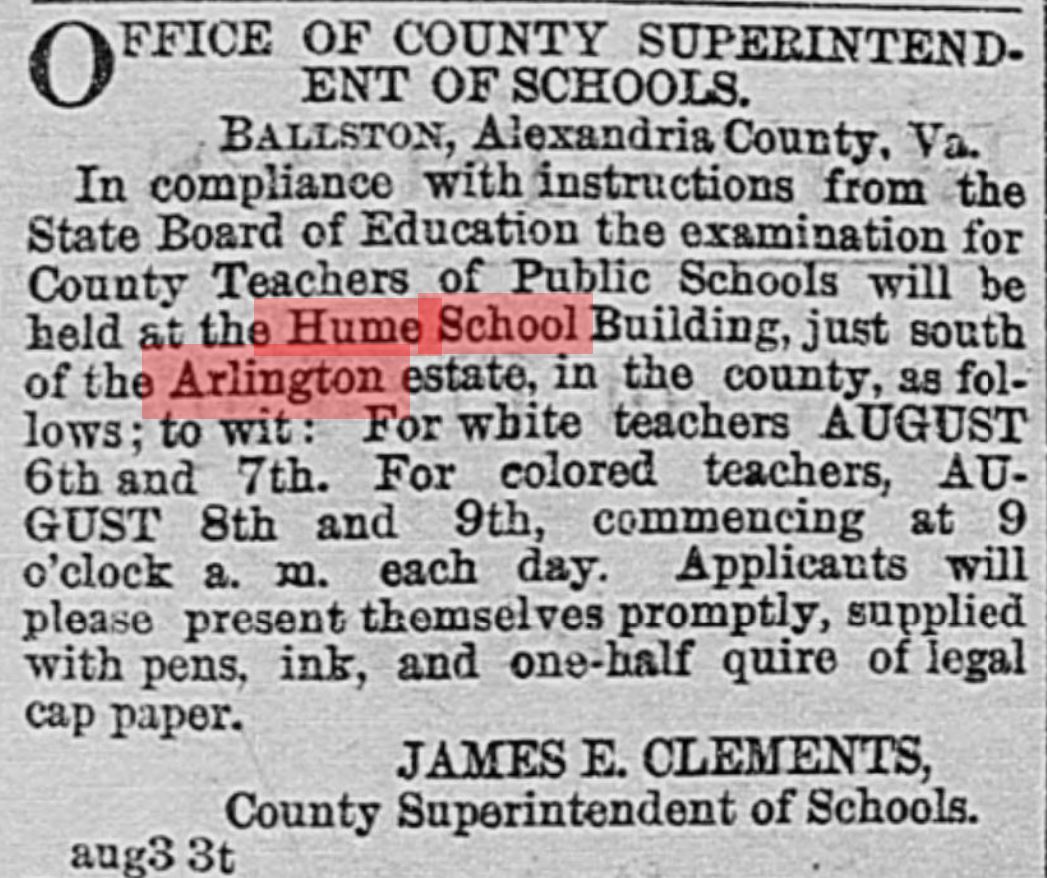 The Hume School is a Queen Anne style 1-1/2 story brick building constructed in 1891 by Washington architect B. Stanley Simmons. The full hip roof, gabled dormers and bell tower give the building a distinctive profile. The main entry on the west side below the bell tower is of arched brick and leads to a hallway along the building's west wall.

The school was named for local businessman Frank Hume who donated adjacent land for the school's playground. Hume was a Civil War veteran who was born in Culpeper County, Virginia in 1843 and was wounded in the Battle of Gettsyburg. Hume served in the Virginia House of Delegates. Surprisingly, public schools were rare in Arlington (which was part of "Alexandria County" until breaking away to form its own county in 1920) until the late 19th century. A state ordinance allowing public schools was passed in 1846 by the Virginia General Assembly but no public schools seem to have been established in Arlington County until 1870; prior to that date, the public schools were situated in the southern portion of Alexandria County which became part of the City of Alexandria.

The school stood on a quarter-acre lot as seen on the 1900 Virginia Title Company map of Alexandria County. The Hume School served its South Arlington neighborhood until 1958. The building has been home to the Arlington Historical Society's (AHS) museum for decades. The AHS formed in 1956 and bought about an acre of land around the building, too, in 1960, saving the school building and an adjacent lot from development.

The Hume School was designated an Arlington County Landmark in 1978 and was listed on the National Register of Historic Places the following year. Besides being the work of a local architect, the school represents the trend away from the small schoolhouses of the 19th century to massive structures to serve the public school student. Influences of the architect's training in Boston at the Massachusetts Institute of Technology are seen in the grand design of the imposing structure. A photograph of the school-turned museum was chosen by Arlington County to grace the county car decals for 2011-2012. The school and its namesake were the subject of a presentation by Tom Dickinson of the Arlington Historical Society at a local library in 2018.