Nestled in the rear of the Scriver Block, along Division Street in Northfield, MN, stands the historic First National Bank of Northfield. Its quaint, unassuming facade masks the significance of its past to passersby. However, upon inquiring about the building to any resident of the town, one is bound to hear an incredible story. The First National Bank of Northfield is known today for the events that took place in 1876, when three members of the legendary James-Younger Gang walked through its doors — what followed was the not often mentioned, yet unforgettable, Northfield Bank Raid. 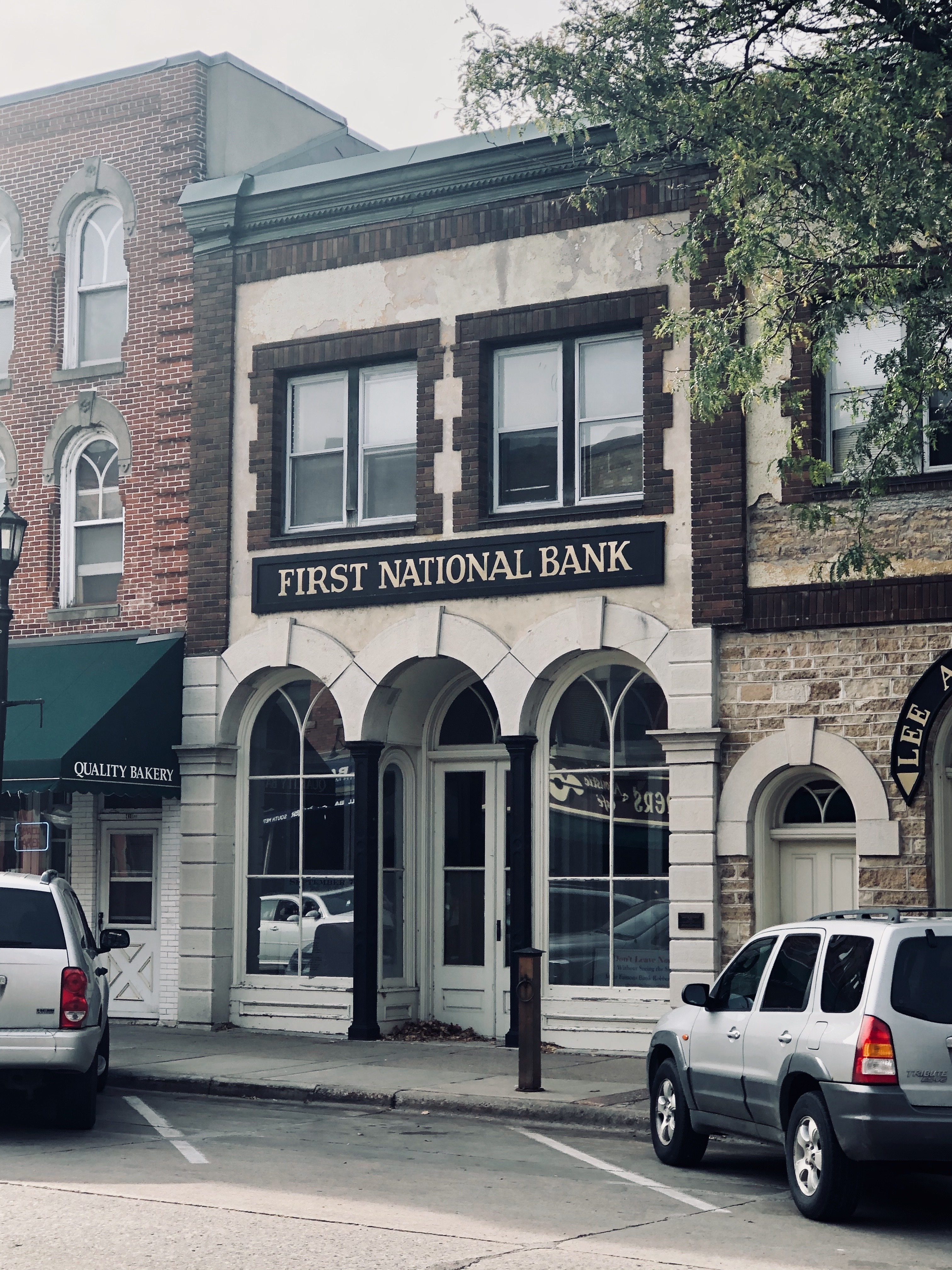 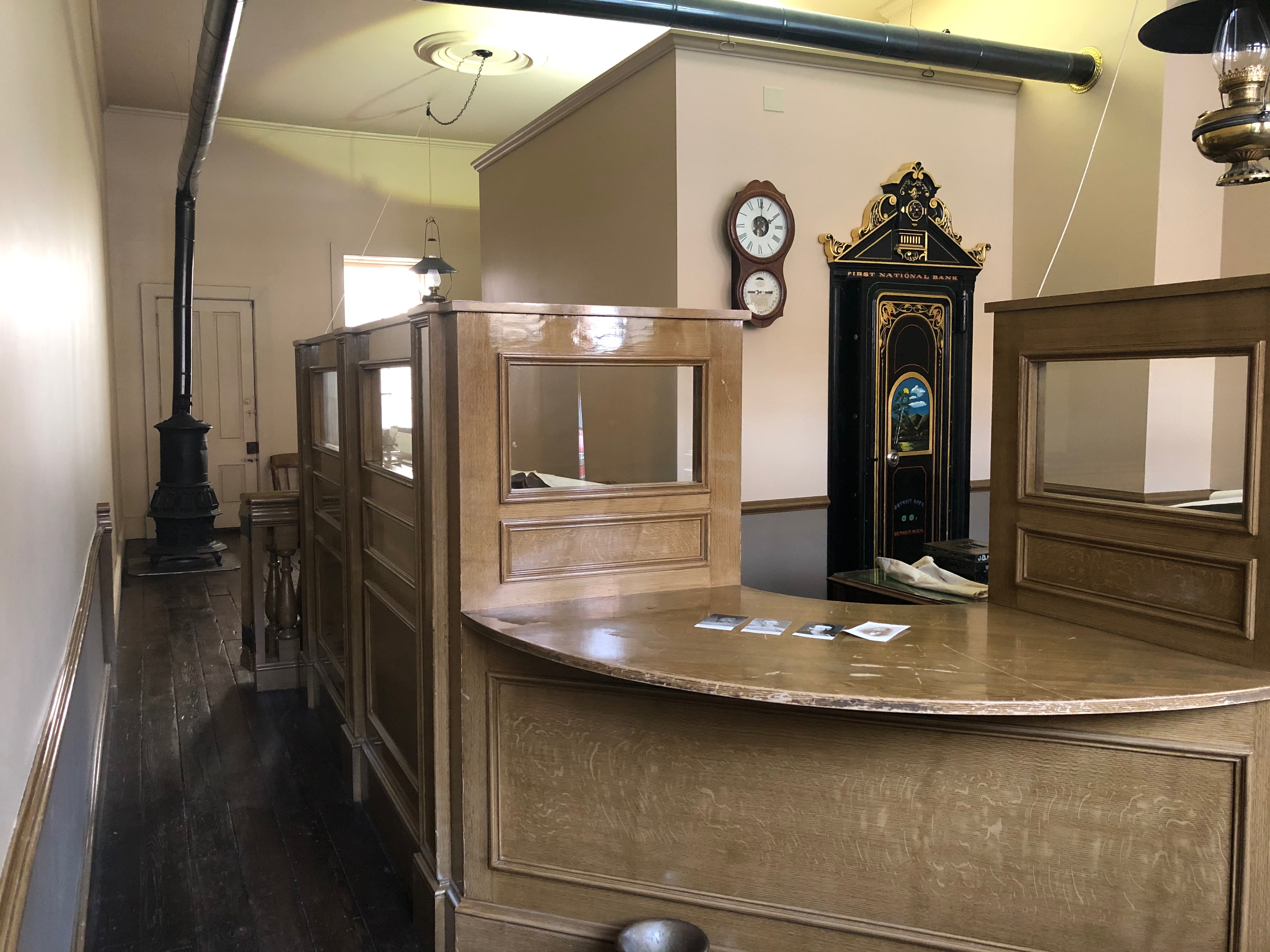 View behind the counter, First National Bank of Northfield 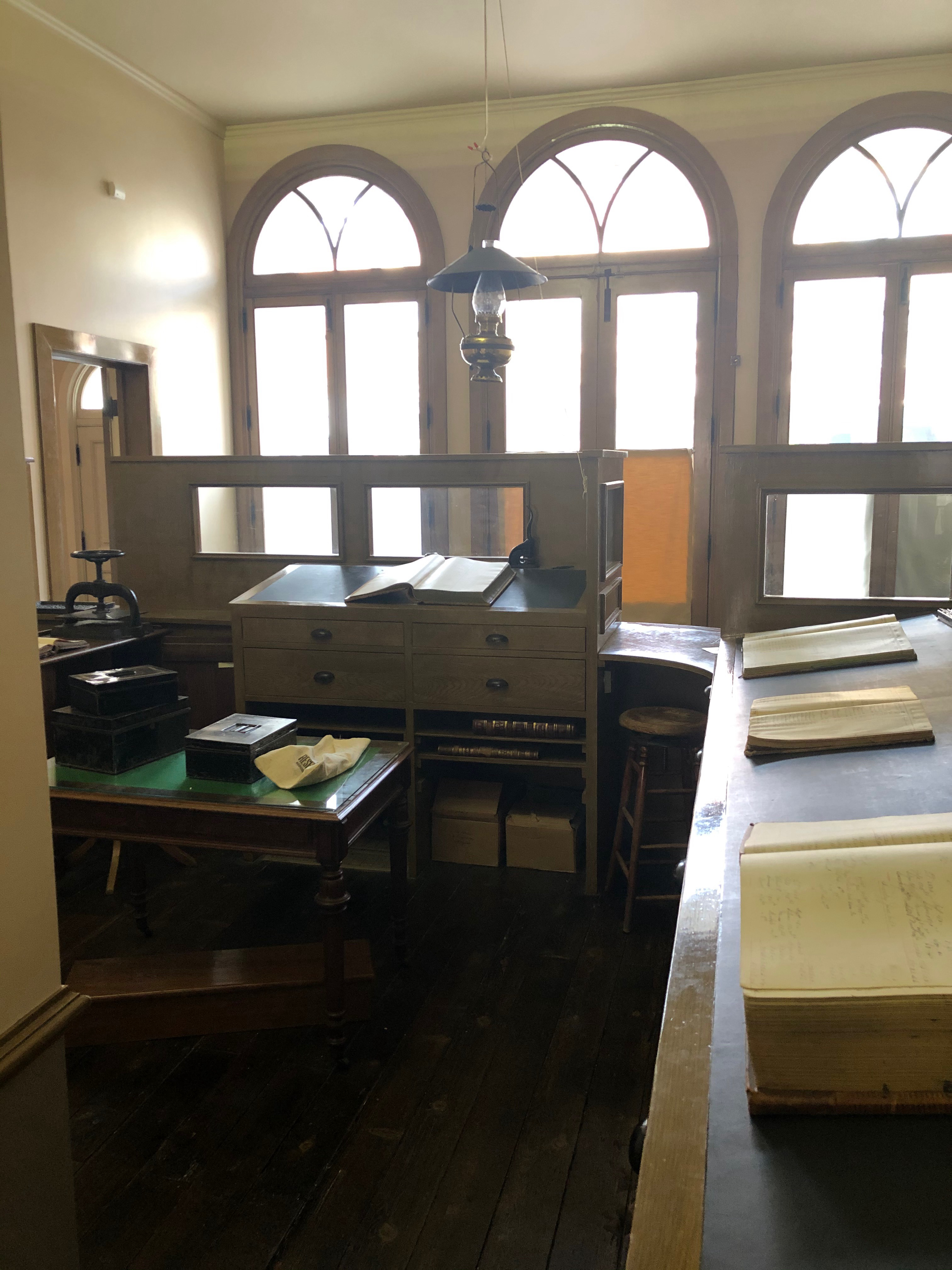 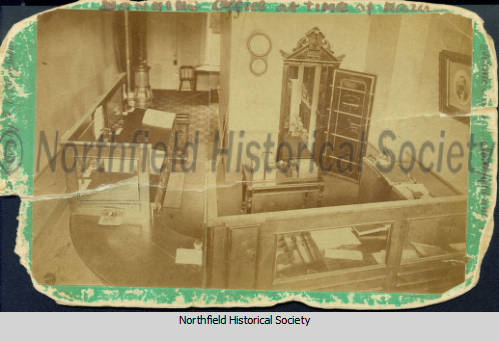 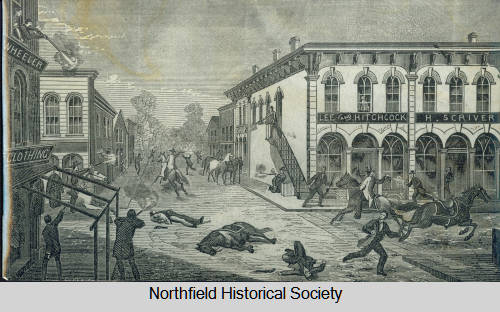 Bodies of Clell Miller and Bill Chadwell on display, 1876 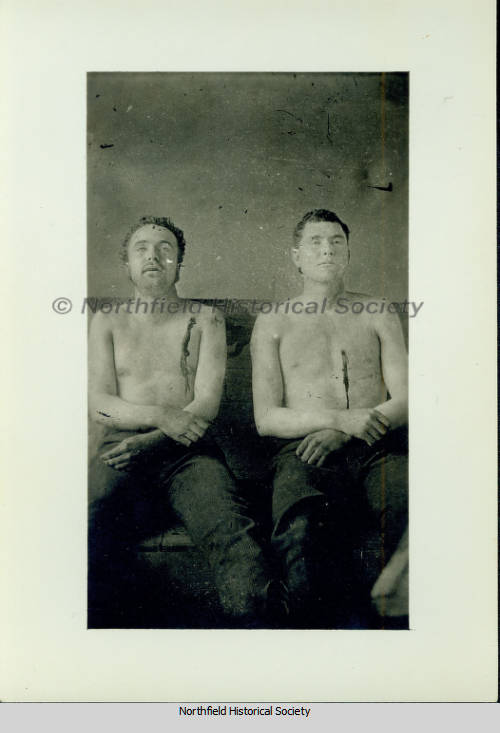 As it stood in the autumn of 1876, the James-Younger Gang comprised the infamous Jesse James and his brother Frank, along with Bob, Jim and Cole Younger, Charlie Pitts, Clell Miller, and Bill Chadwell. Hardened by their experiences in the Civil War South, and each with their own vendetta against the North, the James-Younger men were as dangerous as any alive. Their decision to travel to Minnesota was driven by a few factors. For one, the summer before had been busy for the gang, and it was determined a trip north would shake the local sheriffs off their tails. Secondly, they knew citizens in the North were well off, and their banks should be brimming with cash. Not only that, but the unexpectedness of a robbery in peaceful Minnesota would catch residents completely off-guard and unprepared. And finally, there was Jesse’s personal desire to put an end to one Samuel Hardwicke, an operative in a raid on the James farm the year before which killed Jesse and Frank’s younger brother and maimed their mother. Given that the rest of the James family were law abiding citizens, this raid sparked outrage and hatred for Hardwicke; he moved to St. Paul to start his life anew. With these motives and more in mind, Jesse James and his posse strolled up in front of the First National Bank of Northfield on Thursday, September 7, 1876.

It must be noted, the finer details of the raid have been a matter of historical debate. As is often the case following an exciting and traumatic event, eyewitness accounts vary and the journalistic interpretations at the time were quite romanticized. As a journalist for the Minneapolis Tribune wrote the day after the robbery, “every rumor afloat on the street was caught at with eager interest. . . . Every man encountered had his story to tell.” However, historians have since been able to come to a consensus on the general timeline.

It was about 2:00 p.m. when Frank James, Bob Younger, and Charlie Pitts dismounted their horses in front of the First National Bank (by this point in time, the daytime robbery had become somewhat of a gang specialty, and they had marked 2:00 p.m. as their golden hour); these three men were responsible for carrying out the robbery. Cole Younger and Clell Miller were posted outside the bank on Division Street and served as watchmen. Jesse, Jim Younger, and Bill Chadwell situated themselves in the town square, prepared to guard the escape route. Immediately upon entering the bank, the three outlaws, Frank, Bob, and Charlie, had their nickel-plated revolvers pointed at the head of the young teller, demanding he point them to the cashier. When the teller told them the cashier wasn’t in that day, the men took it upon themselves to hop the counter and find the cash. While they were doing this, another employee of the bank narrowly escaped out the front door, shouting to the townspeople in the streets, “they are robbing the bank!”

It must be understood that banks in the American West were not the government-insured institutions of today. If a bank burned down or was targeted in a robbery such as this, that money simply disappeared. The James-Younger Gang’s actions were a direct threat to Northfielders’ livelihoods, and those residents were not about to sit back and take it. So it was at the sound of the bank employee’s shouts that hardware store owner Anselm Manning pulled every gun and cartridge out from its glass display case and scattered them across the countertop. He was going to make sure his town fought back. What followed was an epic shootout in the streets between everyday people and hardened outlaws which resulted in two dead on each side of the fight. In the heat of the exchange, Northfield lost J.L. Heywood, one of the bank’s tellers, and days later Nicolaus Gustavson, a Swedish immigrant, who died of his wounds. The bandits had suffered the loss of Clell Miller and Bill Chadwell. Less than 10 minutes after the James-Younger Gang rode up to the bank, the robbery and ensuing gunfight were over, and the six remaining outlaws rode away with only $26.60 to show for their troubles.

However, the gang would not leave Minnesota without a fight. Telegraph messages were sent to all the surrounding towns of Northfield, and many people, spurred on by the excitement of the chase, desire for revenge or the promise of “$3,000 per head offered for the robbers,” took off to pursue Jesse and his men. At its peak, the gang was being chased by at least 200 armed citizens, making this the largest manhunt in U.S. history. Meanwhile, the bodies of Miller and Chadwell, not even wiped clean of their blood, were being displayed publicly back in Northfield, where men, women, and children alike gathered to hear incredible stories and marvel at the human trophies. Within days, both of the James men would escape to freedom and continue on with their delinquent ways. Charlie Pitts would die in a confrontation during the pursuit, and all three Younger brothers would be captured and sentenced to life terms in Stillwater State Prison. Jesse never got to face Hardwicke, the man who killed his little brother. What happened to the bones of Miller, Chadwell, and Pitts remains wholly a mystery. Almost 150 years later, this raid is remembered as the downfall of one of American history’s most notorious groups.

Currently under the ownership of the Northfield Historical Society, the First National Bank building has been maintained as a historical landmark. For a small fee, visitors can view the bank’s interior the same way it stood in 1876, with the authentic ledger still on the counter. The local branch of the First National Bank now operates in a separate building just across the street.

The robbery and chase have inspired numerous works of art, including the 1972 Philip Kaufman film, “The Great Northfield Minnesota Raid.” Each year on the weekend after Labor Day, the town hosts Defeat of Jesse James Days, a celebration to honor the bravery of their townsfolk, complete with a reenactment of the shootout. The fight against the James-Younger Gang continues to be a point of pride among residents of Northfield.