Now the centerpiece of an early twentieth-century residential subdivision, the original part of the Alcova farmhouse may have been built in 1836 by John Young. The core also may be a tenant house on the farm, since the main house may have been burned during Union soldiers' occupation of the property. Major renovations were done after the farm passed out of Young family ownership into the hands of a former state senator in 1915, using salvaged architectural elements from Georgetown in Washington, D.C. He subdivided the surrounding 100 acres in the 1920s to form the Alcova Heights subdivision, a local historic district. Can you guess what the name Alcova means? Here's a hint: AL-CO-VA. 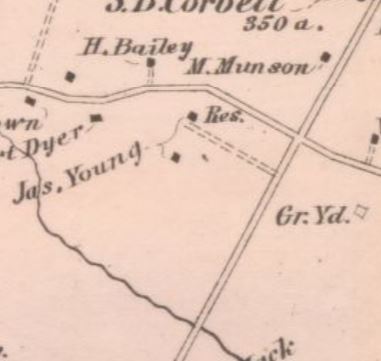 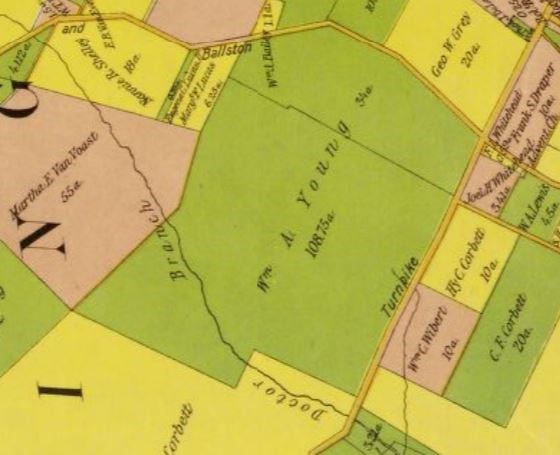 The farm was owned by James Young by 1878. Two houses were on the tract by 1878, with James residing in the northern of the pair, according to the Hopkins Atlas map (the Alcova house). William A. Young was the owner by 1900, when the Alcova house was on a 34-acre tract; the remainder of the Young farm was over 100 acres, as seen on a Virginia Title Company map. William's widow, Mamie, sold the property to Joseph Cloyd Byars, a former State Senator, in 1915. Mr. Byars expanded the home and came up with the clever name to represent the first two letters of Alexandria County, Virginia (a former designation of the portion of the 100-square-mile District of Columbia on the Virginia side of the Potomac River). Mr. Byars' architect added tall white pillars, a wrought iron balcony and shutters to the exterior, salvaged from historic homes in the Georgetown region of Washington that were being demolished. Recycled paneling, flooring, and mantels found their way into the home's interior.

Byars subdivided the surrounding property of over 100 acres into smaller lots in the 1920s for residential development before selling the farmhouse lot to Allen Coe in 1932. The subdivision is named Alcova Heights and was made an Arlington County local historic district in 1978.