The Jim Thorpe (Mauch Chunk) Canal was crucial for economic development by being a catalyst for other coal industries in Jim Thorpe when the discovery of anthracite coal took place just 8 miles west of it. The Lehigh Coal & Navigation Company was founded in 1818 by Josiah White when transportation of coal was needed, and they looked to the Lehigh River. Eventually, the canal was no longer needed and was damaged in a flood. In 1979, a plan/project to create ideas about the restoration methods of the canal for recreational use was under study. More specifically, present day of Jim Thorpe does not lack in interest from its tourist, but the redirection of the tourist through the recreational development the project of 1979 studied has helped tourist understand the importance Jim Thorpe served in the Lehigh Canal System. 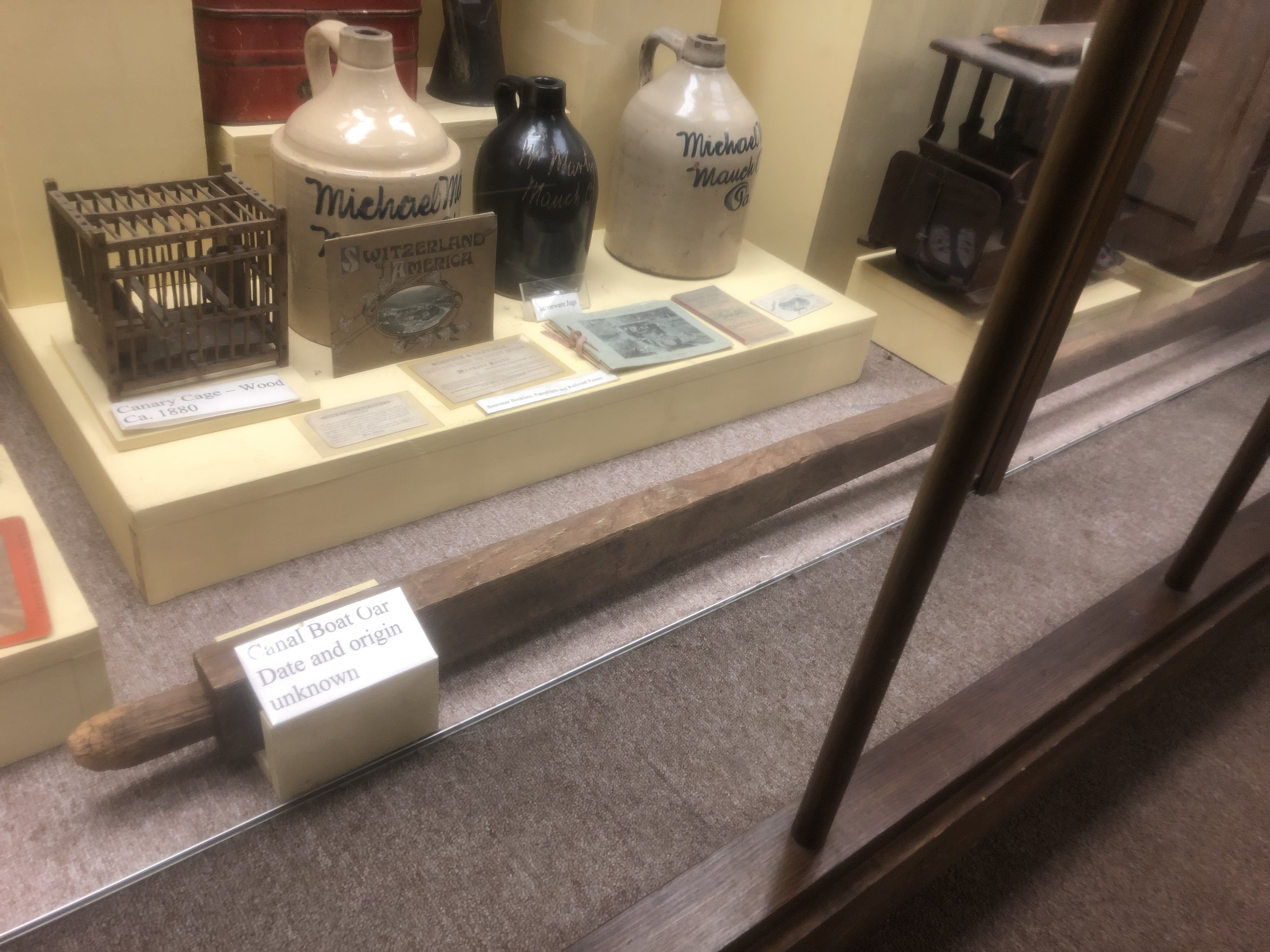 The layout and dimensions of a Canal Boat 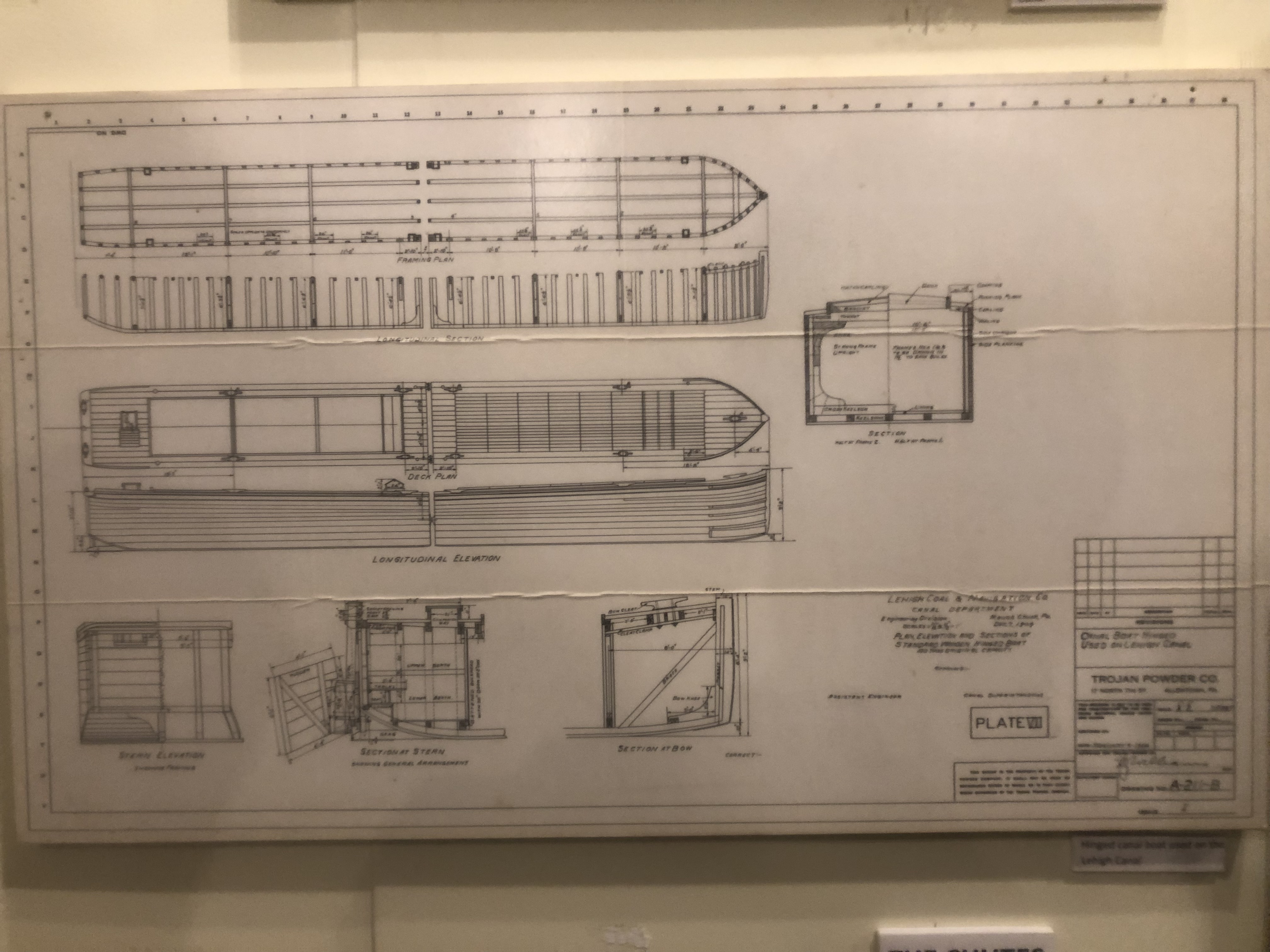 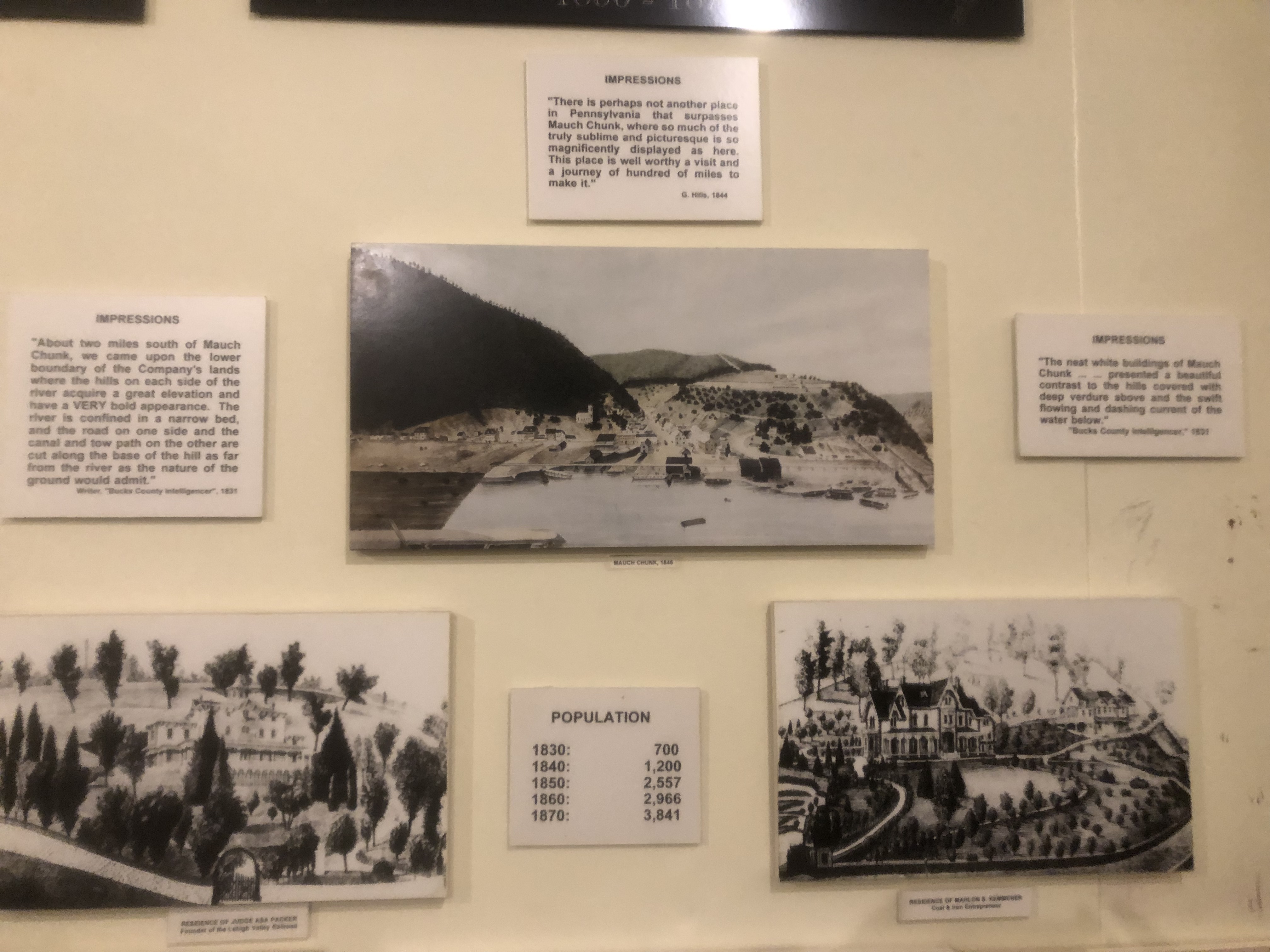 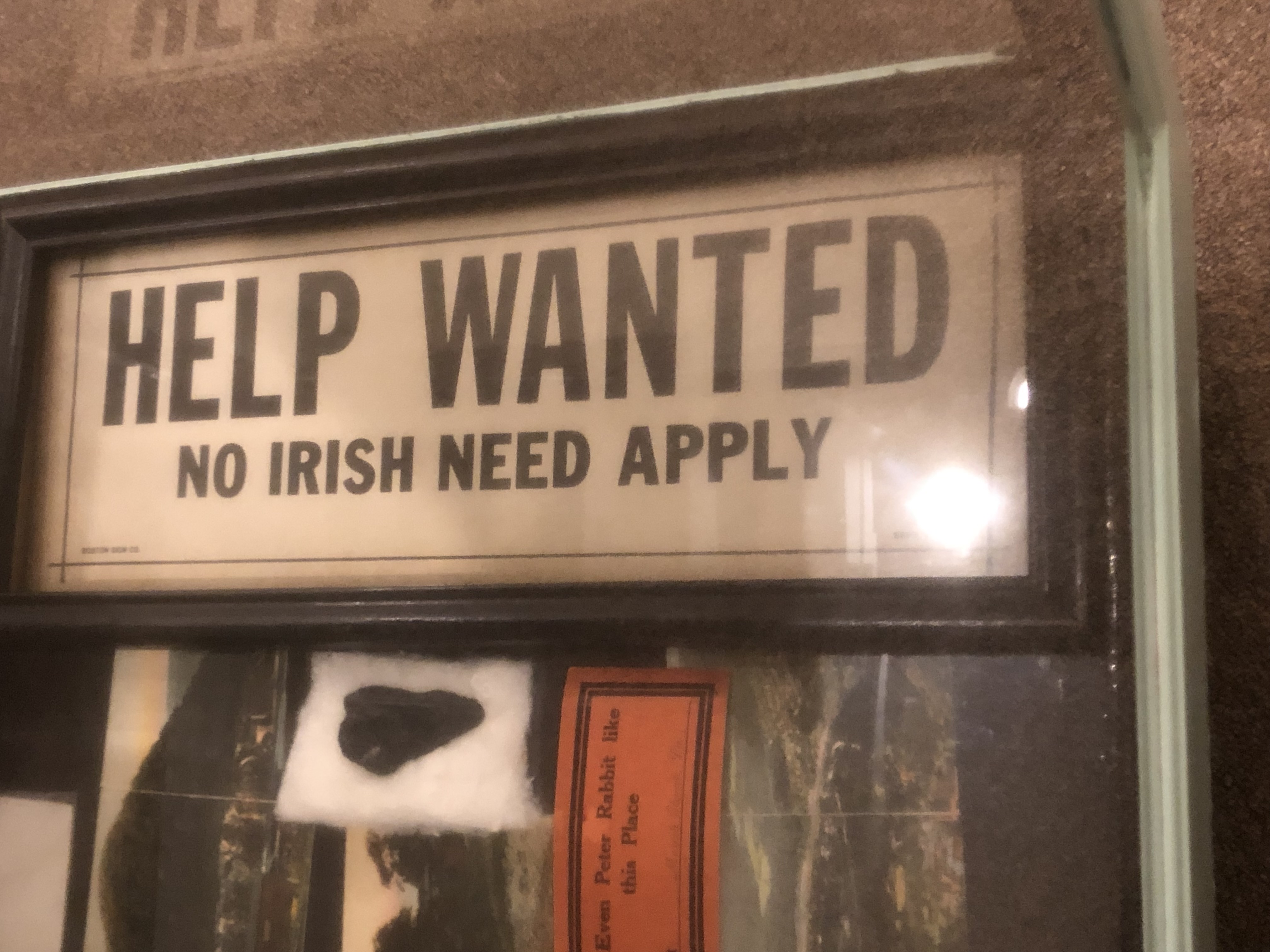 The restoration of Lehigh Canal between Jim Thorpe and Weissport 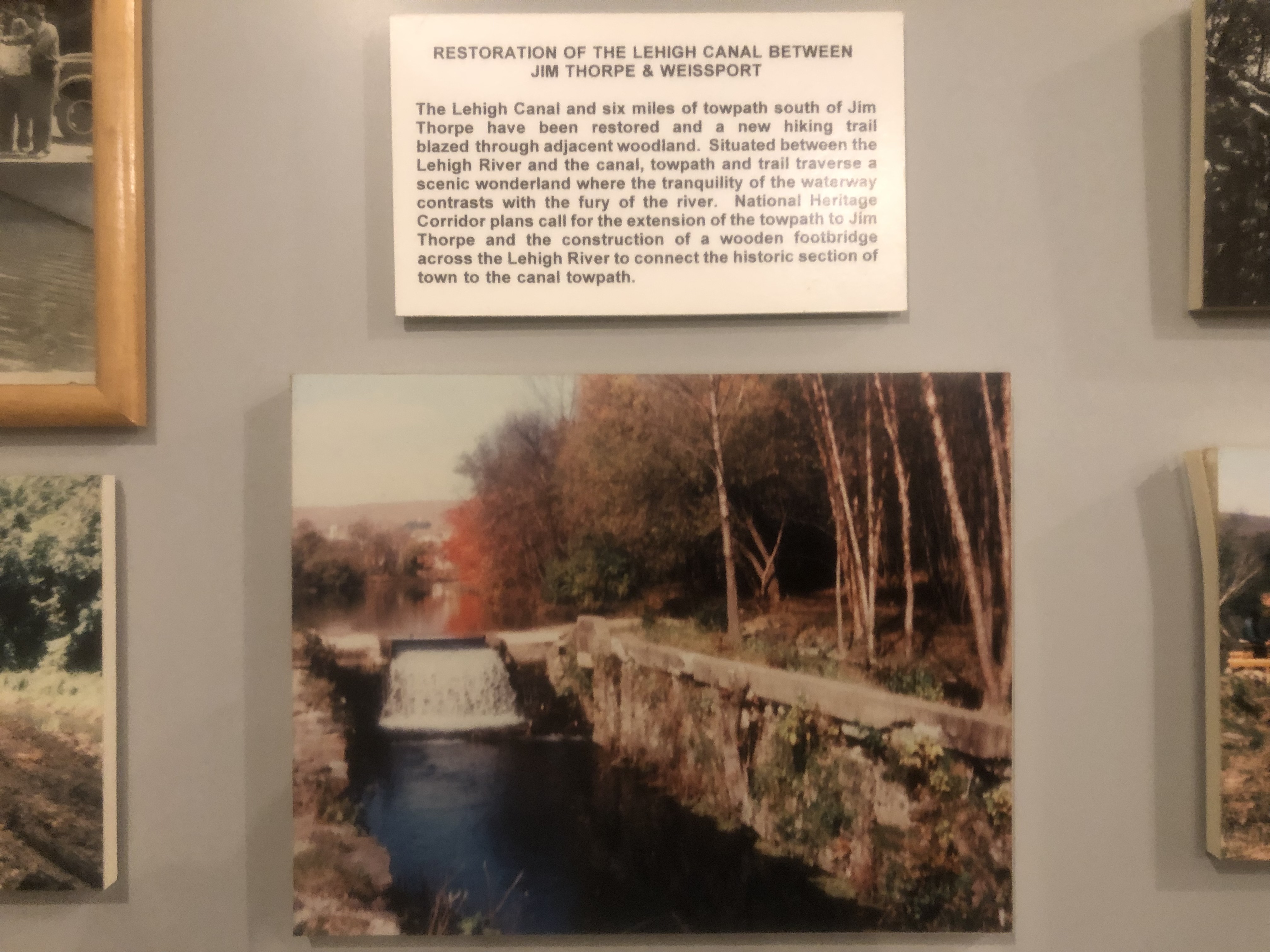 The building of the Lehigh Canal was a 28-year process and the construction in Mauch Chunk was from 1825-1829. The canal was built off the river with 49 locks ascending and descending from Mauch Chunk to Easton to transport anthracite coal. This was not a simple task, most of the workers were either local farmers or Irish immigrants that used picks, shovels, and wheelbarrows. The canal was 45 feet wide at the bottom and 60 feet wide at the top with a water depth of 5-6 feet. The canal was one of the largest towpath canals of its time with a cost of $800,000. The towpath was on the west side running parallel to the canal where mules would pull the canal boats and a berm was on the opposite side of the bank. A single boat required two mules to pull it across the canal with a series of ropes along with a mule tender. A mule tender was typically the son of a “canawler” which was a nickname for a boatman at the time. “Canawlers” would often work 18 hours for six days a week and were paid by the amount being hauled rather than per hour.

The Mauch Chunk Canal was very active during the 1830s to the 1860s. During this time, Mauch Chunk was able to expand across the Lehigh River forming the eastern part of Mauch Chunk. The population grew from 700 in 1830 to 2,966 in 1860. The town saw a tremendous growth in population with the canal business booming from 1840 to 1850 with a peak in 1850. The canal business also brought in many job seekers and ultimately lead Asa Packer to Mauch Chunk. In 1855, when the great invention of the canal began to become obsolete, Asa Packer started a more promising business called The Lehigh Valley Railroad which opened in Mauch Chunk. The company used steam-driven railroads that delivered coal much faster to Easton than a boat moving 1 ½ - 3 miles per hour could.

As the Mauch Chunk Canal was coming to an end with the railroad invention, the upper 22-mile section of the Lehigh Canal that led into Mauch Chunk was destroyed in a flood from the Lehigh River in 1862. The flood was a result of a powerful storm that passed through Eastern Pennsylvania. The water level was said to have raised fifteen feet in ten minutes and killed over one hundred people. The repair would have been too costly for the canal with it becoming less important in an advancing society of Mauch Chunk and was never repaired. This resulted in a decrease of operation for the lower 47-mile section that led to Easton and eventually came to an end in 1942.

In 1979, The Heritage Conservation and Recreation Service (HCRS) project took place to inspire people to accomplish an effective way for using the canal system in Jim Thorpe for recreational use as a public trail. The plan included a restoration from guard lock 1 in Jim Thorpe to lock 13 in Parryville. It also included two methods for adding recreational trails: a path that goes around the sewage treatment plant that would involve clearing a path along the Lehigh River and a trail that would cross the railroad at the sewage treatment plant. Lastly, the project wanted to limit recreational development in archeologically sensitive areas and use signs to direct canal trail users to historic Jim Thorpe. The restoration ideas that the HCRS project hoped to see implemented in the near future has helped the canal trail to be one of the many tourist attractions in Jim Thorpe today. The canal trail is able to provide for people that want to fish, have picnics, run, or observe the remains of the once active canal that put the coal industry on its feet.