This historical marker commemorates the arrival of the first Pony Express rider in San Francisco on April 14, 1860. The rider completed the final relay leg of the mail delivery route, which departed from St. Joseph, Missouri, ten days earlier, on April 3, 1860. This commencement date from Missouri marked the official start of the Pony Express. To commemorate this event, a historical marker was erected in 1936 by the Oregon Trail Memorial Association in conjunction with the Native Sons of the Golden West. The Pony Express marker is part of a series of historical markers sponsored by the Native Sons/Daughters of the Golden West. It is also part of the Pony Express National Historic Trail marker series. 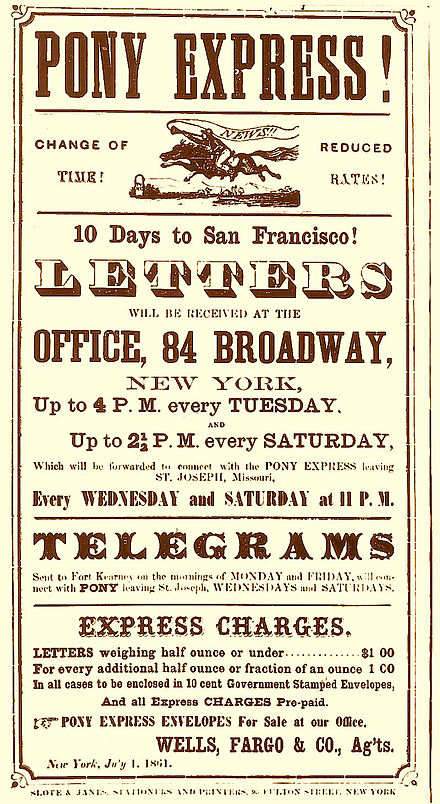 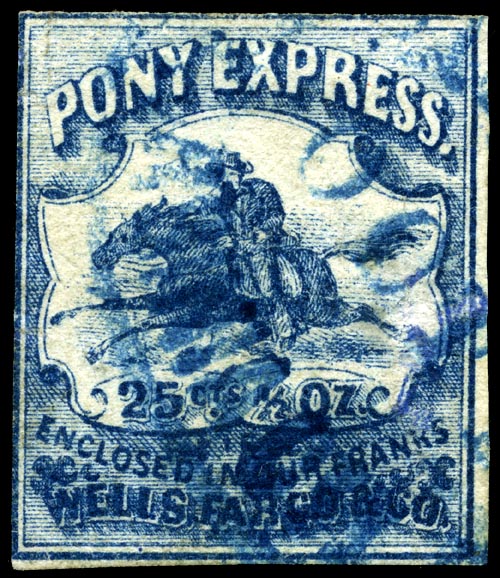 Letter from first westbound Pony Express mail delivery to California on April 14, 1860. Only surviving piece of mail from this first delivery. 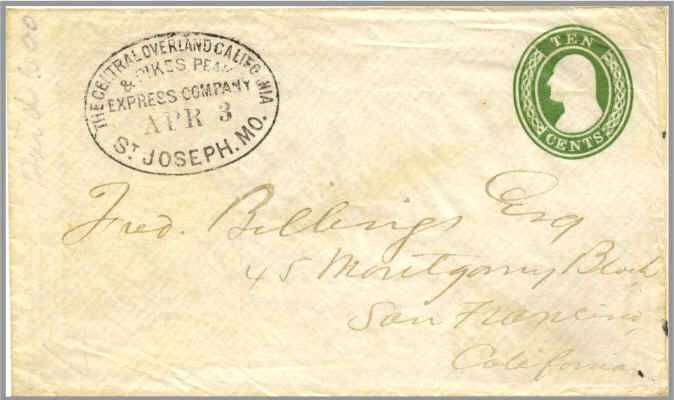 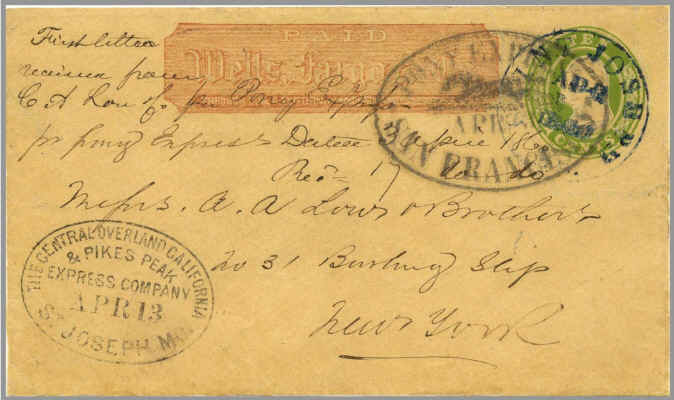 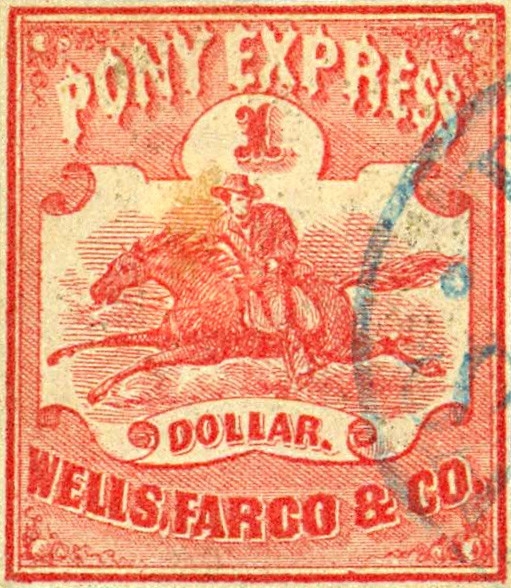 Mail Stolen from the Pony Express, which was recovered and finally reached New York on May 3, 1862. 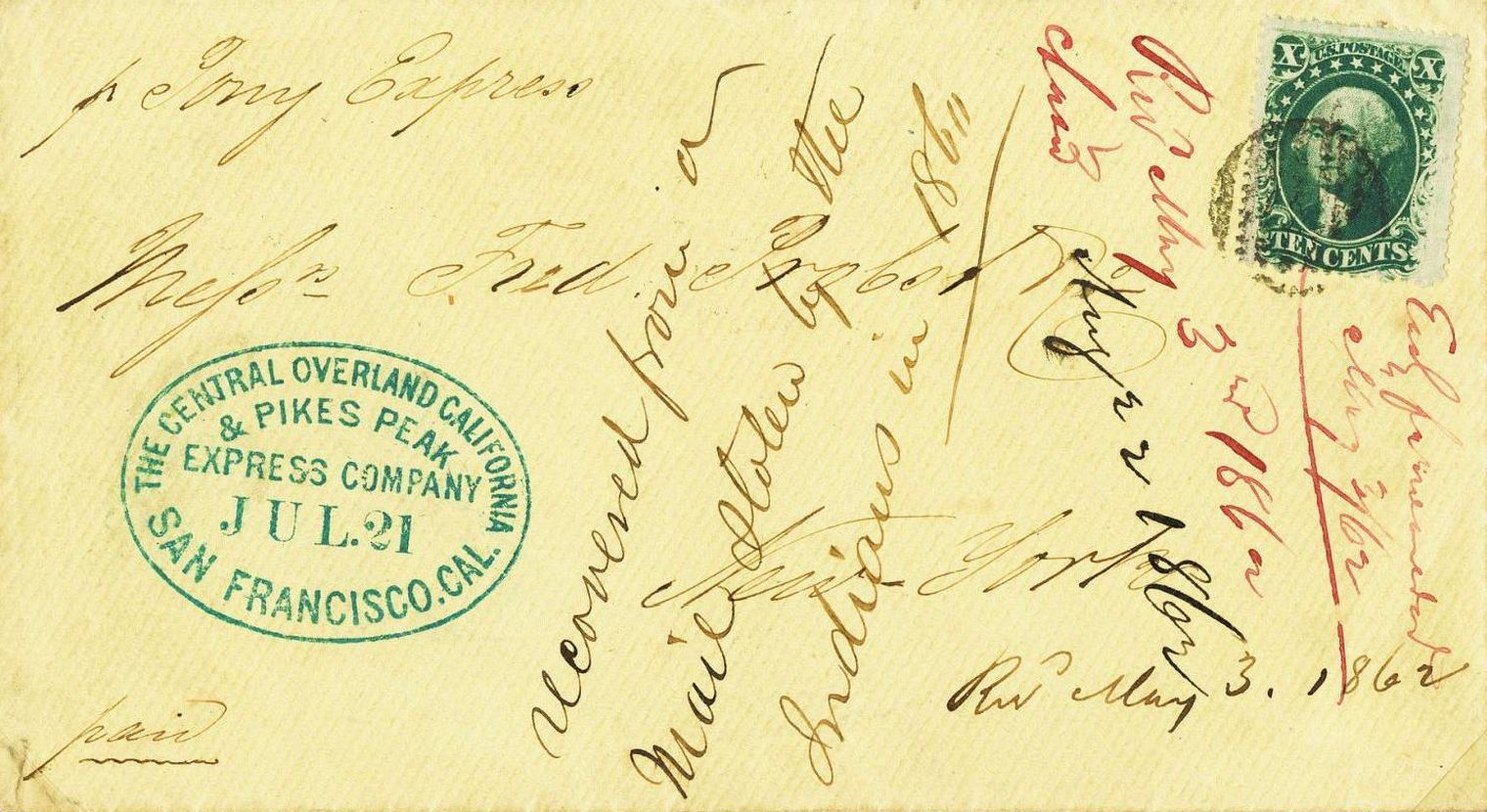 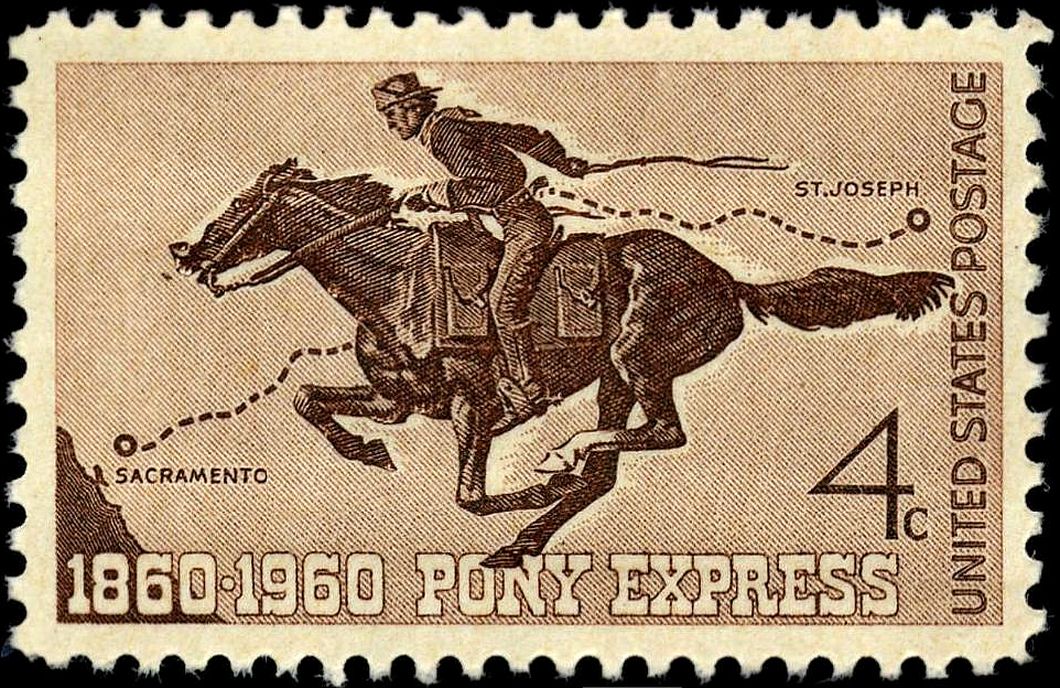 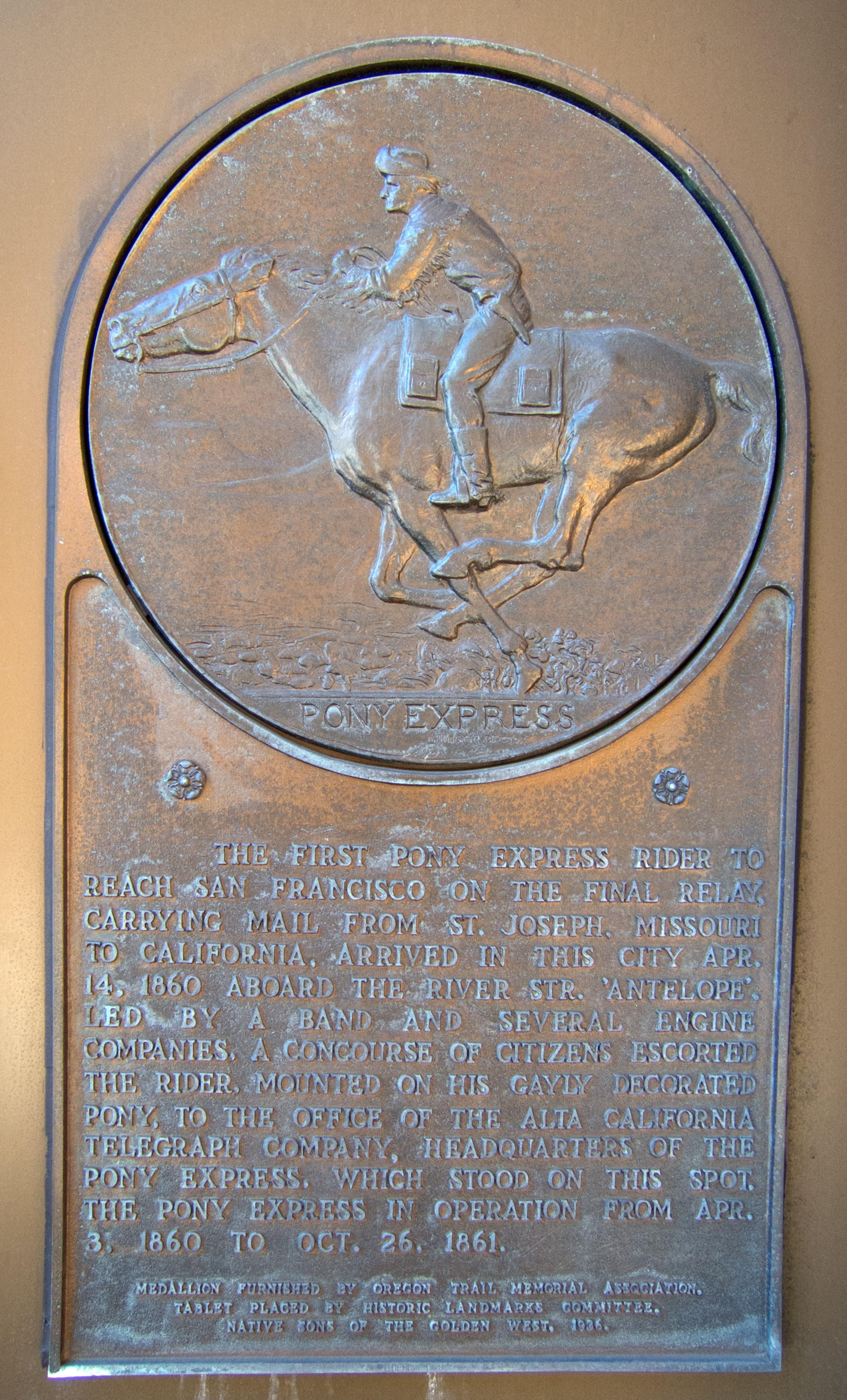 The Pony Express officially commenced on April 3, 1860, from St. Joseph, Missouri. The entire Pony Express route, which took ten days of predominantly overland travel on horseback covering nearly 2,000 miles, concluded with a rider dismounting his horse for a stint of river transit via a steamship from Sacramento to San Francisco as the final relay leg of the route. Thus, the first ever Pony Express rider to reach San Francisco did so via the river steamer, Antelope, which arrived in port at approximately 1:00 a.m. on April 14, 1860, in the wee hours of morning, the city of San Francisco welcomed the rider and his horse with a public reception and celebration. Throngs of people eagerly awaited the completion of the first ever westbound journey of the Pony Express.

The Pony Express was founded by three men in the stagecoach business, William Russell, Alexander Majors, and William Waddell. They sought to create a faster overland route for communication in the years just before the telegraph became accessible to the western half of the nation, especially for the purpose of connecting the western frontier in Missouri with the Pacific coast and the communities that had formed in California after the 1849 Gold Rush. Moreover, the Pony Express route was considered vitally important in linking the nation, particularly as there was a risk of California's secession from the Union just before the outbreak of Civil War. It was thought by some that the Pony Express could perhaps help to link the nation together.

At the start of their venture, the founders of the Pony Express acquired 600 of the most stalwart broncos, while placing ads for 75 male riders under age 18 who met similarly strict criteria for bravery. Riders had to weigh less than 110 pounds in order to keep the weight burden upon the animals as low as possible. The cost of sending one piece of mail from Missouri to California was $5, estimated at approximately $140 by today's standards. Riders were commissioned to carry the mail in mochila (saddlebags), padlocked to ensure safety from ambushes, which were common in the west. Throughout each relay leg of the journey, a rider would dash at full speed for 60-100 miles, before transferring the mochila filled with mail to the next rider. Every 10-15 miles, a rider would change horses; thus, each rider would usually ride six horses during his particular leg of the route.

The first rider ever to reach San Francisco via the Pony Express was greeted by cheering crowds who congregated on the street after midnight for a public welcome reception replete with marching bands, fireworks, and speeches to congratulate the rider and his horse in completing the final leg of the relay. This final leg entailed dismounted transit on a river steamer from Sacramento. Before the Pony Express was founded, mail could take several weeks to travel from coast to coast, including partial transit by stagecoach. The first batch of mail ever to reach California by Pony Express contained a message sent from President Buchanan on the east coast to the Governor of California on the west coast. The President's goodwill message was sent by telegraph from Washington on the east coast to St. Joseph, Missouri, where it was recorded and then carried by Pony Express to California. It reached the Governor ten days later.

From April 3, 1860 until October 26, 1861, the Pony Express operated in every kind of weather over frequently harsh terrain, with riders and their horses susceptible to many possible dangers. Less that two years after it was founded, the Pony Express officially ceased its operations due to the installation of a system of copper telegraph wires connecting the western U.S. with the Pacific coast, which allowed for quick communication, thereby undermining the need for the Pony Express. Although the Pony Express was terminated at the end of October 1861, mail continued to travel by Pony Express during November 1861, until the last batch of letters were delivered. Five years after the official end of the Pony Express, rail transportation finally advanced through the Sierra Nevada Mountains, further linking the western U.S. with the Pacific coast.

Although the Pony Express was short-lived, it left an impressive legacy, one that has been much romanticized over the years. There is debate as to whether “Buffalo Bill” Cody and other outlaw figures of the American West once served as riders, as this idea was popularized in Buffalo Bill’s Wild West shows. Regardless, for a brief period, the Pony Express served an important purpose in facilitating communication and connecting the nation during the fraught years just before the Civil War. Nearly a century later, Frank S. Poppelwell, a history professor at St. Joseph’s Jr. College in Missouri, wrote this retrospective assessment of the Pony Express for the Missouri Historical Review:

“In mid-[nineteenth] century America, communication between St. Joseph, on the fringe of western settlement, and gold mining communities of California challenged the bold and made skeptical the timid. Into this picture rode the Pony Express. In rain and in snow, in sleet and in hail over moonlit prairie, down tortuous mountain path . . . pounding pony feet knitted together the ragged edges of a rising nation.”

Reuter, Coree. "Receive A Letter In The Mail Today? Thank A Horse!", The Chronicle of the Horse. April 1st 2010. Accessed November 8th 2019. https://www.chronofhorse.com/article/receive-letter-mail-today-thank-horse.

Photo of the Pony Express Marker by Harold Colson, June 29, 2015