James Sloan Hutchinson founded the San Francisco Society for the Prevention of Cruelty to Animals (SF SPCA) in 1868, after witnessing an act of animal cruelty on the streets of downtown San Francisco. To commemorate the 100th Anniversary of the institution's establishment, a historical marker was placed at the intersection of Clay Street and Leidesdorff Street. The marker was given by the American Humane Association in conjunction with the California Historical Society and the Wells Fargo Bank on October 30, 1968. The marker can be located by crossing the street directly south from the Transamerica Pyramid. It is mounted on a building on Clay Street at the intersection with Leidesdorff Street. 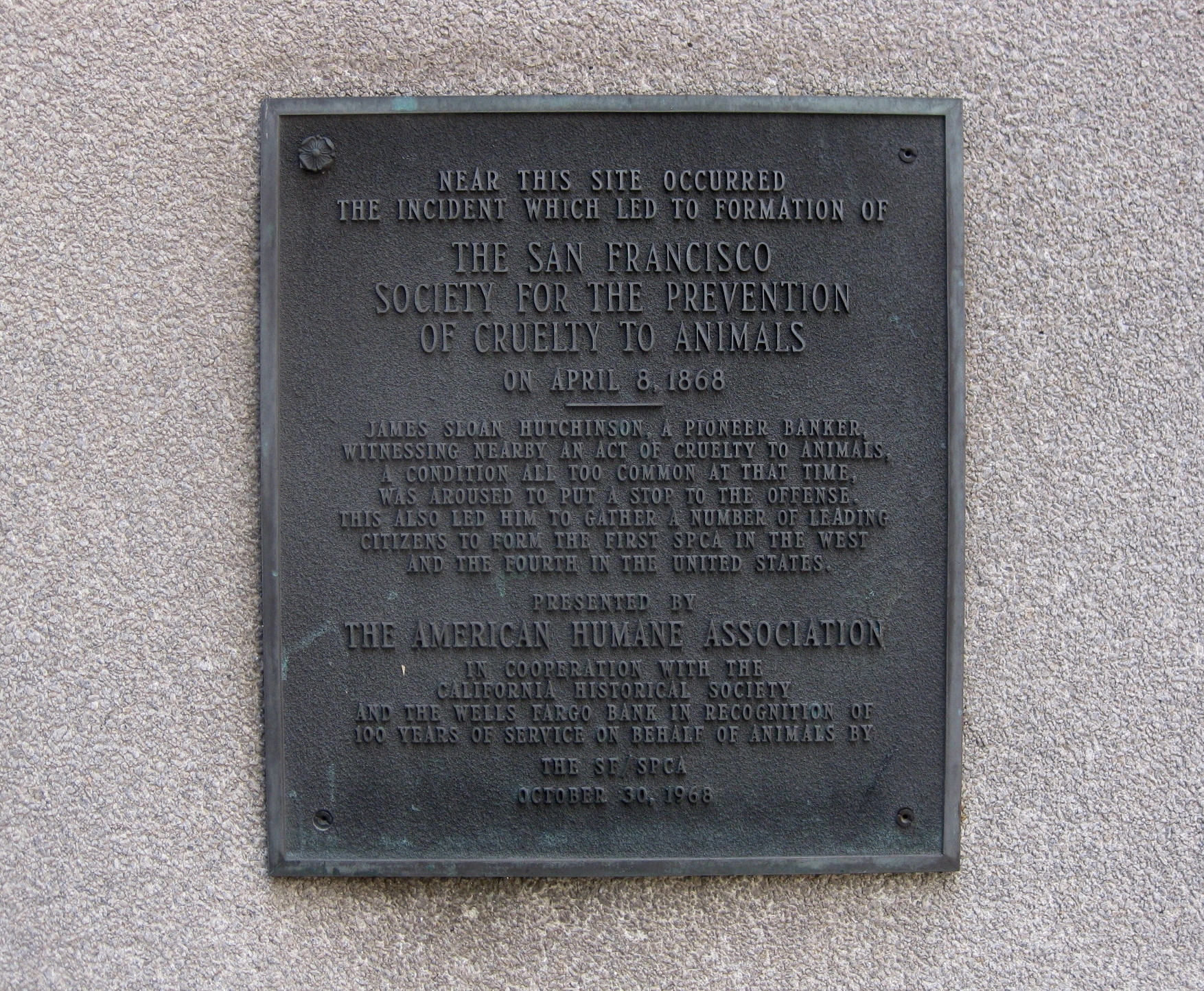 James Sloan Hutchinson, a banker, witnessed an incident involving cruelty towards an animal while walking down the street in San Francisco during the spring of 1868. Two men were dragging a live hog to market, while the animal's body was being scraped against the cobblestones during transit. Alarmed and horrified, Hutchinson stepped in to stop the mistreatment of the animal.

Following this incident, Hutchinson rallied the support of fifteen other concerned citizens, and he led them in founding the San Francisco Society for the Prevention of Cruelty to Animals (SF SPCA) in 1868. Upon its inception, the SF SPCA became the fourth humane organization in the United States. It was also the first humane organization west of the Mississippi River. The same year, in 1868, the government of California also passed a law criminalizing cruelty to animals.

In 1906, a devastating earthquake, followed by subsequent fires, ravaged the city of San Francisco. In the aftermath of this tragedy, the SF SPCA rescued many of the animals that were trapped, hurt, or abandoned amidst the city-wide chaos and devastation.

In 1918, the SF SPCA established a retirement ranch for horses who were being retired from active service with the San Francisco Fire Department. All city horses concluding their active service became eligible to receive institutional care provided by the SF SPCA. In 1924, the SF SPCA opened its first public animal hospital.

By 1968, the same year that the SF SPCA received a historical marker to commemorate its 100th Anniversary, the institution also opened one of the most modern and advanced animal hospitals in the world. Today, the SF SPCA remains a national leader in saving homeless dogs and cats and in ending animal abandonment.