The discovery of anthracite coal between Summit Hill and Mauch Chunk, Pennsylvania helped connect this fuel source to booming towns like Philadelphia. Starting off as a single dirt road in 1819, it was quickly redone to make the transportation of coal more efficient. By 1827 a single, figure eight, track is bringing the coal from Summit Hill down into Mauch Chunk to the Lehigh River. This track ran completely on mule power and gravity, giving it its name, the Switchback Railroad. It brought revenue and tourism to the local towns until 1937 when it was sold for scrap metal due to the economics of the time. Today, the track's path still remains as a hiking and biking trail.

Advertisement for the SwitchBack Railroad 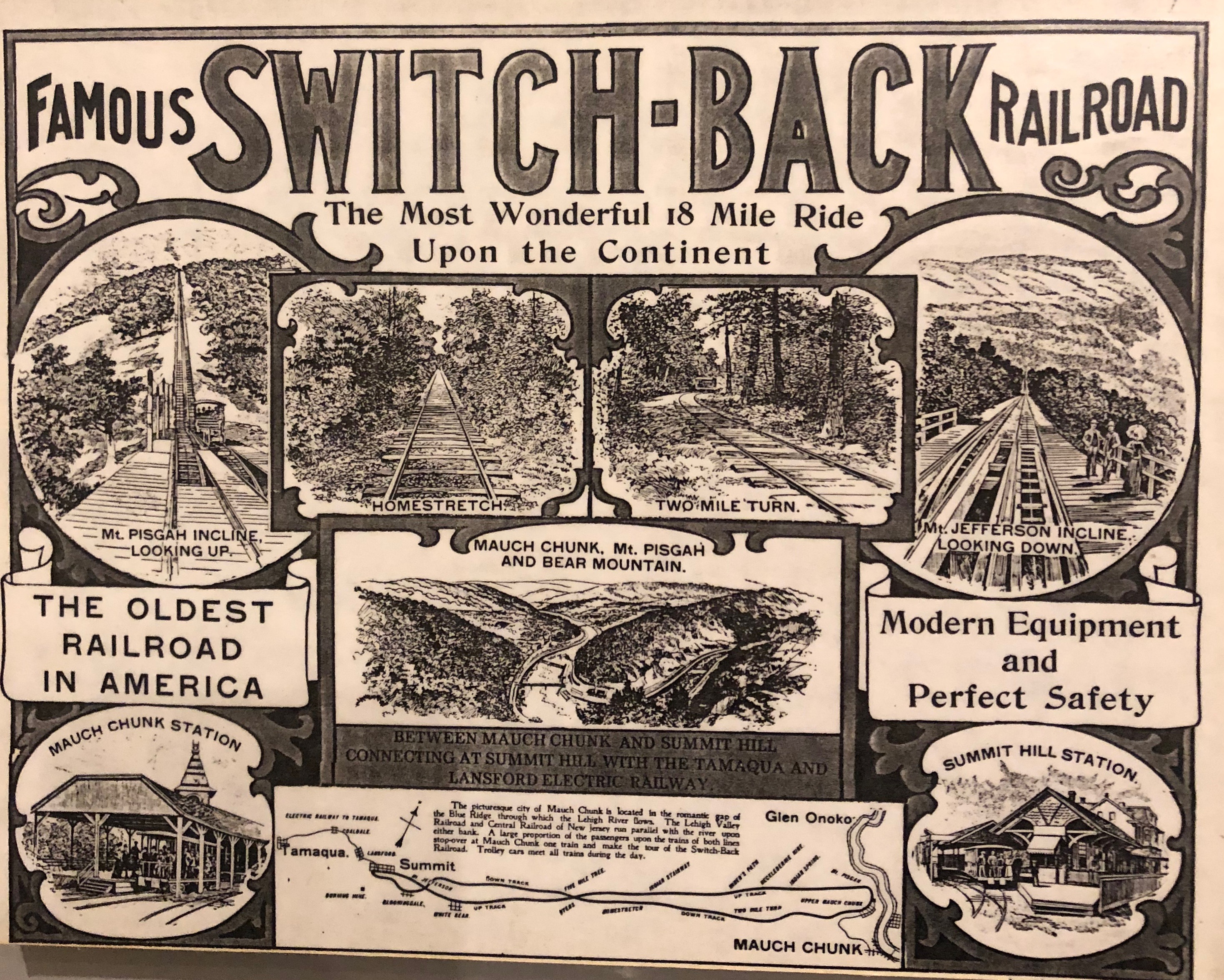 Passengers getting ready to make their way up the mountain 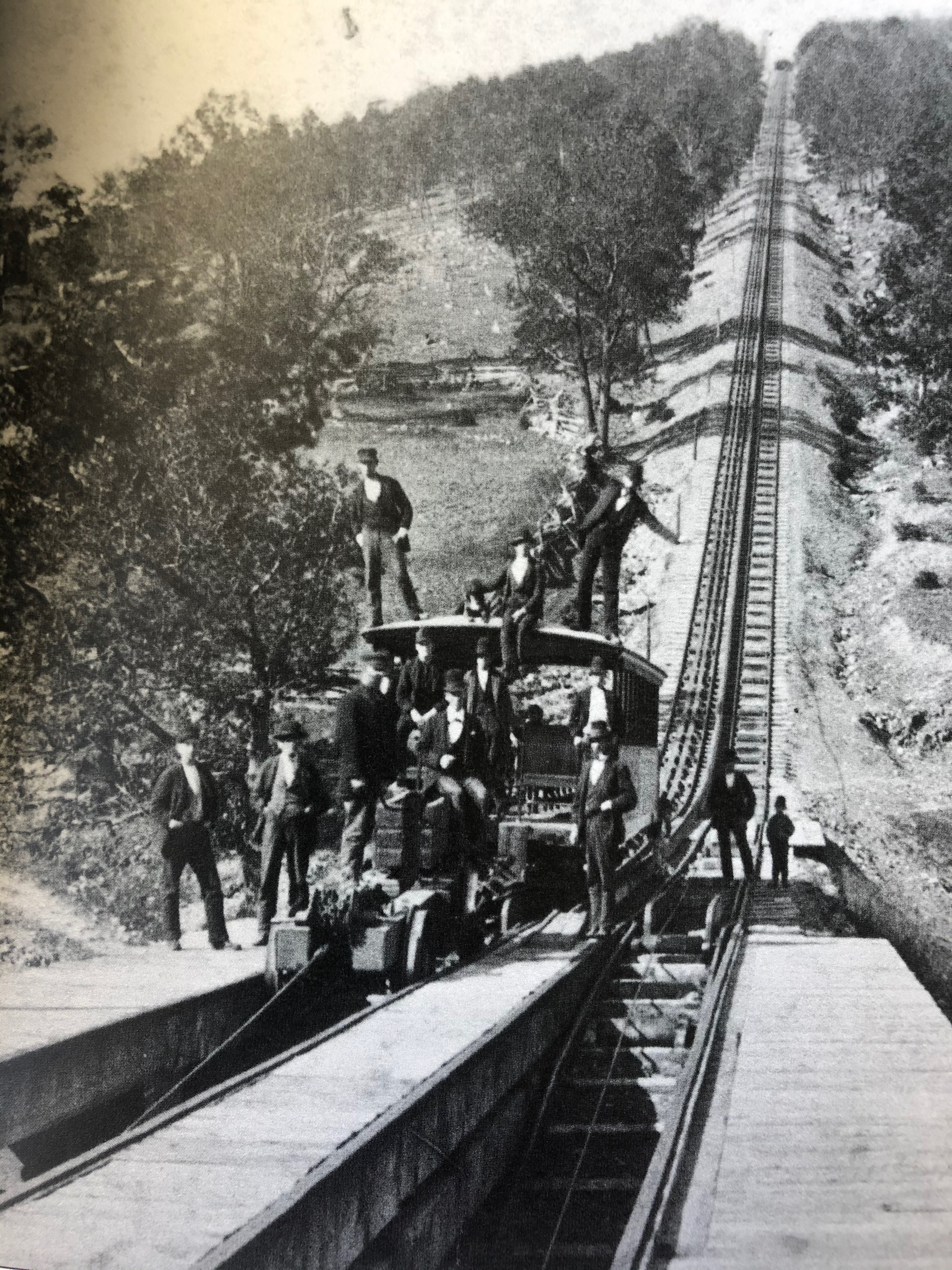 View down to the unloading station at the Lehigh River 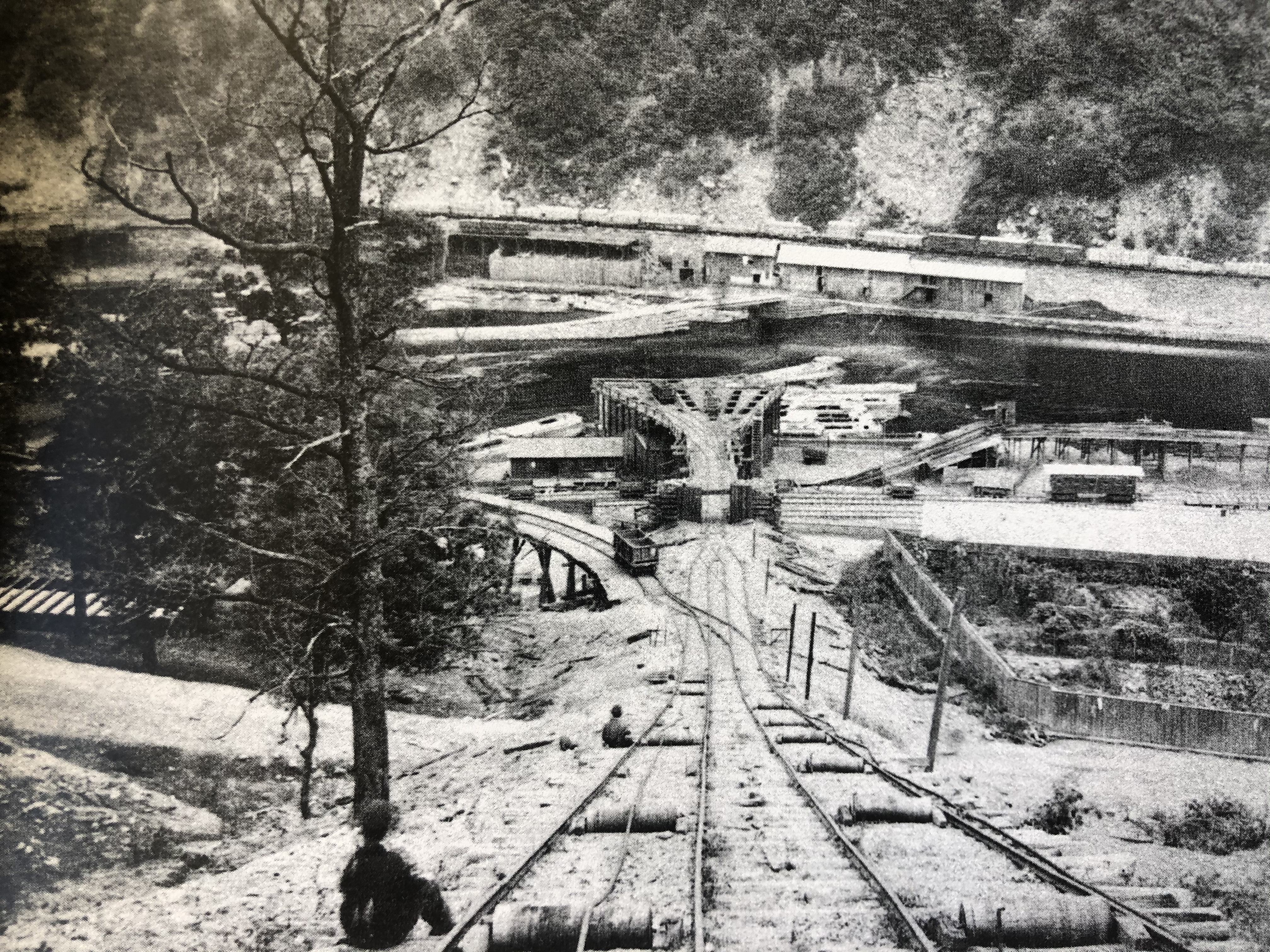 Map showing the figure eight shape of the Switchback Railroad 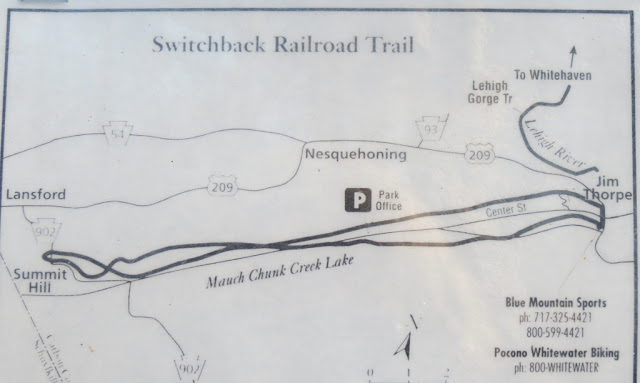 The formation of the Switchback Railroad begins in 1791 when Philip Ginder discovered coal on Sharp Mountain between the Pennsylvania towns of Summit Hill and what was then known as Mauch Chunk. He shared this information with his neighbor Jacob Weiss who had been leading other mining projects around the area. He sent samples of Ginder's coal to Philadelphia, and with it, the interest of shareholders created the Lehigh Coal Mine Company in 1792. Multiple pits were dug, and the coal strains were found throughout the mountainside. By 1819, a simple dirt road had been constructed from the top of the mountain in Summit Hill down to the Lehigh River access point in Mauch Chunk. This is the beginning and the true foundation of what would become known as the Switchback Railroad.

In the beginning, coal was loaded into wagons pulled by mules and brought back and forth to the river. With the massive amounts of coal, and the weight of it, this was very ineffective. Back in December of 1817, Josiah White, a wealthy man in need of coal for his wire mill in Philadelphia, hears of the impressive anthracite coal that is being brought out of this region. He visits the Lehigh Coal Company and sees much potential and decides to lease the mining land out from the Lehigh Coal Company for a span of twenty years. White and his men decide that they are going to need money, so they approach wealthy men in Philadelphia and the local area rounding up enough money to form the Lehigh Coal and Navigation Company in August of 1818.

The previous road of the Lehigh Coal Company was in dire repair. Josiah White wanted the road to be secure and last a while as business was booming with the continued mining of the anthracite coal. To do this he had the road stoned; placing large rocks on the base of the path so that there could be no washouts. This was completed in 1822. With a good road and a steady flow of money coming in, White can now turn his attention to his idea of building a railroad for easier hauling. With some struggles of finding the proper funding the railroad track was completed, on top of the original road, in April of 1827. It took only three months to complete, and ran completely on mules and gravity.

From the start, the railroad brought tourists from all around. While what we think of now as a railway included a train, this one did not. The process was as follows: mules would pull railcars up the mountain into Summit Hill where they would then be loaded with coal, then, the cars would glide back down the mountain to be unloaded. This process helped so much that by 1834, the Lehigh Coal and Navigation Company had 390 cars on their railroad. In contrast to the original day long shift, it now took only three hours for the coal to be fully transported. As time progressed and time was of the essence, the idea of a quicker way of bringing the mules back down the mountain gave way to the use of "dandy cars". These were empty wagons where the mules were loaded into. They then followed the coal down the mountain. It is even said that the mules got so used to this ride that when the dandy cars were used on accident for coal, they would refuse to make the descent on foot.

As plans for faster coal mining occurred, a plan was put into place for making a back-track for the railway. In 1845 the backtrack was completed turning the one-way single track into what would look like a figure eight circling from the top of the mountain down to the river. This is where the railroad finally gets the name, The Switchback Railroad. it brings in tourists from all over the country and comes to be known as the world's first rollercoaster, as people are allowed to ride down the mountain on it.

The decline of the Lehigh Coal and Navigation Company came with the emergence of petroleum on the market in the 20th century, and by the 1920's America’s railroads are being taken over by highway transportation. Even with these roadblocks, the Switchback Railroad continued to make profit from rides, but in 1933 the local newspaper announced that the railroad was going to be shut down. On September 2, 1937, Isaac Weiner, a scrap metal dealer from a neighboring town, purchased the railroad for $18,100. Within days, workers went at the railroad tearing it up piece by piece. Now, the Switchback Railroad lives on in Mauch Chunk, now known as Jim Thorpe, as a biking, hiking, and walking trail. Stone supports to the rails can still be found today and a memorial wagon is there as a dedication for the true foundation of the town and the surrounding area.