The "Legendary" Genetti Hotel & Convention Center is located in downtown Williamsport and is one of the highlights of the city. It towers over all the other building with it immense height and can be recognized by its neon red "Genetti" sign located on top of the large building. Though the Genetti has been updated and remodeled it is still a staple piece to the history of Williamsport.

Southwest Corner of Genetti hotel in 1922 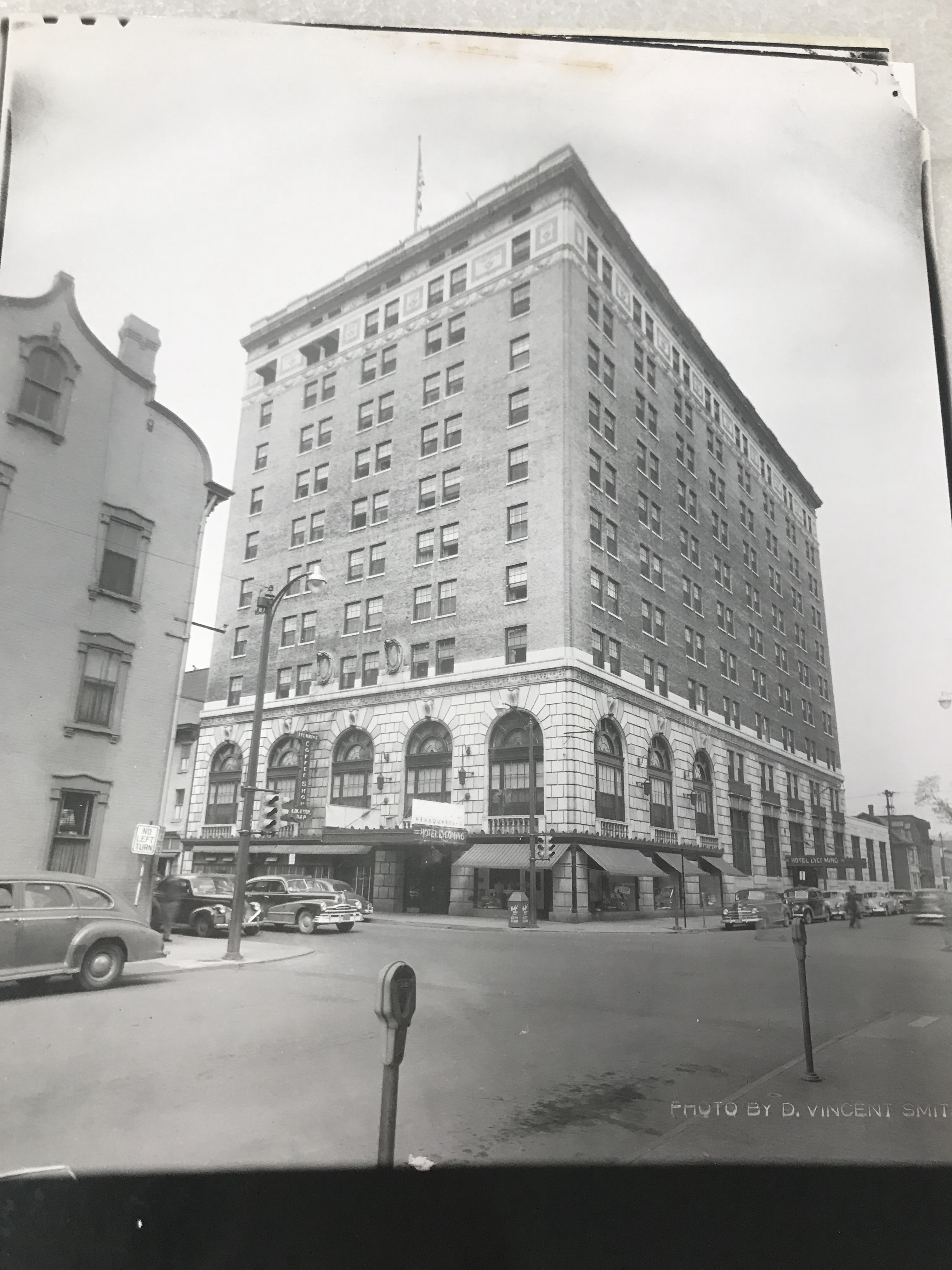 Originally named the Lycoming, the Genetti Hotel, was built in 1922. It was and still is the largest building in Williamsport (Austin, 4).The Hotel was designed by architect Lee Stoddart and was his second building in the keystone state. Construction of the building was by W.M. Sutherland Building and Contracting Company and contracting was done by W.G. Cornell Company of New York City (Austin, 10-11). The original cost of the building was $800,000 without furnishing (Austin, 11). John F. Letton was the first manager of the Genetti from 1921-1931(New York Hotel Review, 1922).

The Genetti was first owned by Williamsport Hotel Company, then Alan B. Kramer and then Williamsport hotel company again. The rights were then bought by Gus Genetti Jr. on June 23, 1975 who still own the rights today. The Lycoming name was changed in 1990 to The Genetti Hotel and Convention Center (Allabaugh, 2014). Gus Genetti Jr., also decided to make some renovations in the 1990s. In 1992, renovation of the lobby, ballrooms, meeting rooms, and restaurant were made. The hotel additionally added a façade, workout room and computer room (Austin, 48). Today the hotel advertises 200 rooms and suites, restaurant, lounge, 2 huge ballrooms, pool, beauty salon and much more (The Genetti Hotel & Suites, 2019).

The Genetti has stayed standing through the Depression, World War II, the Korean war, three major floods and increasing preferences for motels. The first flood the Genetti went through was the great 1936 deluge, in which the hotel helped house 200 stranded guests and rescue workers (Austin, 40). The grand hotel has been home to many guests and tourist throughout the years (Austin, 48). The Genetti has also housed famous guests such as Sergei Rachmanionoff, Dainty June, Yehudi Menuhin, Gene Kelly, Clarence Darrow, Will Durant, Jose Itrubri, Rita Hayworth, Paulette Godard, Ogden Nash, Carl Sandburg, Norman Cousins, Pearl S. Buck, Gene Autry, Wilt Chamerlain, Aretha Franklin, Bob Dylan, Joan Osborn, Cab Calloway and Harlem Globetrotters. Some more unique guests include the world tallest man, Jack Earle, in 1941 who was 8 feet 6 ½ inches who need two beds to sleep on and, 10 baby falcons who took refugee at the Genetti until they could successful fly on their own (Austin, 44) (Dennehy, 1962).

Though the Genetti has a vast history, it has always been known for its importance as a place of meeting for the community of Williamsport. Social clubs, small local businesses and community organizations would have monthly and annual meetings at the hotel (Austin, 48). Furthermore, the hotel was known to have various banquets and important conferences. The Genetti has held banquets and dances for local civics groups such as, Williamsport Education Association, Eastern Stars, Bucknell Alumni association, the GRIT, shrine Club, Junior League, County Medical Society and Young Republicans (Austin, 39). In addition, the Genetti has played a large role in the Little League World Series. Since, the beginning of the first little league in 1946, the Genetti served as the headquarters for the event and has provided rooms for players, parents, coaches, cameramen, sportscasters and visiting dignitaries (Austin, 45). Some of these guests include Al Schacht, Connie Mack and Jim Palmer (Austin, . The Genetti will always be known for its contributions to the community and city of Williamsport.