This cave was discovered in 1857 during the construction of Central Park. Located in an area of the Park called, “The Ramble” this cave was historically referred to as Indian Cave. The nickname seems to have arisen due to local suspicion that Native Americans had at one point made use of the cave, though this claim remains largely unsubstantiated. The cave became a trouble area for local authorities who dealt with suicides, assaults, and hoboes over the years (Kadinsky). As a result, the cave was sealed in 1934. Stories surrounding the cave were most often reported by what was then a relatively young newspaper, The New York Times. The stories that made it to print were often the bizarre or macabre, but they provide an interesting glimpse into the norms and culture of a younger New York City. 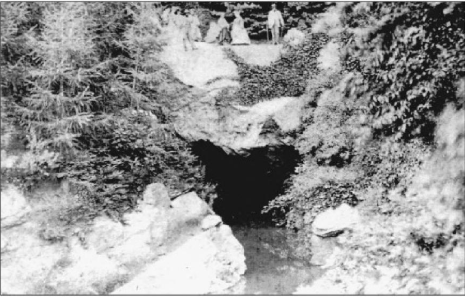 The cave is a natural formation of Central Park that the builders encountered during construction of The Ramble. The New York Times first reported the cave’s discovery on September 7, 1857. The article states that the entrance of the cave was, “only large enough to admit one person at a time and expand[ed] under a large rock until it form[ed] a room with a level floor, apparently laid by human hands, and covered with moss”. A Captain Montgomery led the exploration party, illuminating the small cave by lantern. The first exploration discovered nothing of importance in the cave except the skin of a large snake. The cave was several degrees warmer than the outside air and contained, “a very disagreeable odor”. Captain Montgomery, “became excessively sick and faint before he could get out”. Finally, the report notes that, “the only [other] inhabitant discovered near the cave was an excessively large and exceedingly vicious billy-goat”. 1

The cave was accessible from 1857 until it was sealed by the city in 1934. In the days when the cave was accessible, it was reportedly filled with water. Boaters in the park could, “row into the cave’s mouth and disembark on its flat surface” (2). In 1861, T. Addison Richards described the cave in Harper’s Monthly as, “a bold and romantic rock chamber, which opens northward at the base of the western slope of the Ramble”. 8

The New York Times covered the story of a suicide in the cave on April 18, 1865. The cottage keeper in the Ramble, John McKinney, found the deceased man near the entrance to the cave. The evidence suggested that the man shot himself in the head with a single-barreled pistol. The man was examined and found to be approximately 25 years old, five feet seven inches tall, and a native of France. Beside his body police found a flute and a notebook containing a letter and letter fragment, both written in French. 3

Below is the translation of the letter as published by the Times,

“I was born the same day as misfortune. We are twin brothers. I sought everywhere for fortune but found it nowhere but in this place. Here I finish my anxieties. Those who find me will bury me in the place of my death. My name is unknown, but this I will tell, that I go forth from one of the most honorable families in France. To my best beloved my regrets P.P.” 3

Below is the translation of the letter fragment as published in the same Times article in 1865,

“Good bye! I close by assuring you of my friendship never to end, and offer you sentiments of respect and of love, with which I am yours entirely devoted.

A few years later The New York Times reported the story of a fifteen-year-old girl, Susie Grunelt, who was arrested at the cave after running away from home. The cave was described as, “about thirty feet deep, fifteen feet wide, and high enough to let anyone walk in without stooping”. This account was published on July 31, 1897. Susie had gone missing from home on July 1 and was not discovered until July 30. Local detectives arrested a young man, twenty-one-year-old Joseph Madden. He was charged with, “abducting the girl cave dweller” and investigators believed he was the reason she left home in the first place. It was also thought that he had smuggled food to her in the cave. 4

On Monday April 18, 1904 The New York Times reported a suicide near “Indians’ Cave” in Central Park. A well-dressed young man shot himself twice in the heart. Flames from the pistol shots caught on the man’s clothing and the responding policemen had to put out the resulting fire. The man was between twenty-five and thirty years old, with dark brown hair and eyes. He was dressed in a, “neat black suit, with black derby hat, and black low shoes”. He carried a note in his pocket that said only, “My name is Boy. No relatives in this country”. 5

On the 24th of February, 1908, The Sun reported the case of another young man who attempted suicide at the cave. Policemen heard and responded to cries for help and found, “the man with a gash in his throat and an open razor in his hand”. The man (Grove L. Kline) then said, “One of the sparrow’s told me to do it, I didn’t want to, but I had to obey”. Kline was a clerk from Massachusetts and later told police that he had attended a fair number of “spiritualistic séances” and that he had become afflicted with “voices” after these events. He began to hear the voices all the time and came to New York in the hopes of escaping them. When he couldn’t escape them, he decided the only solution was to kill himself. 6

On October 7, 1929 The New York Times reported that 335 men had been arrested at the cave since the beginning of the year. These men were accused of “annoying women” and the article headline referred to them simply as “annoyers”. 7

Though the cave was walled up in 1934, the remnants of the entrance can still be seen today. Visitors will need to depart the main path to find it. A portion of the original staircase is the easiest landmark to spot and this leads down to the walled-off entrance.