Chowan County Jail 1825 Chowan County Historic Jail This historical marker is located just behind the 1767 Chowan County Courthouse and the Jailer’s Residence. The Chowan County Jail is the oldest documented jail in North Carolina, and the fifth jail built constructed in 1825 with earlier buildings dated 1722, 1741, 1788 and 1809. This building was in operation for 150 years closing in 1975 and has stood vacant for more than 40 years until Edenton Historical Commission took responsibility for this facility and its restoration. The jail has a great historical significance with references to Harriet Jacobs, Captain Robert Quinn and Nat Turner Revolt. You can tour North Carolina’s Oldest Jail with guided walking tour through the Edenton Visitor Center, The Pilgrimage and by visiting Edenton and taking a self-guided tour. Sources Ehcnc.org/places-of-interest/museum-trail/museum-trail-chowan-county – jail http://visit Edenton.com/sites https://www.historicsites.nc.gov/all-sites/historic-edenton www.edentonpilgrimage.org 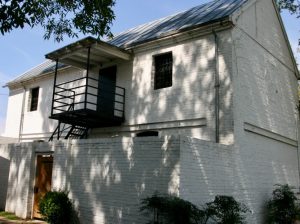 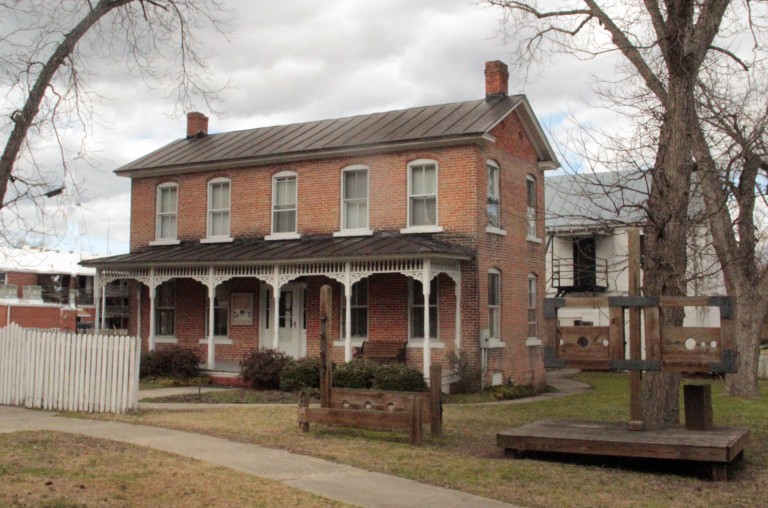 The fifth Chowan County Jail for Edenton North Carolina was constructed in 1835 by Ebenezer Paine, from the same plans used to in 1773 courthouse drawn earlier by John Hawk. The building is 36”x21’ two story brick structure with English Bond pattern, it has front and back walls that are 29 inches thick on the bottom story and 24 inches thick on the second story, the end wall are 18 inches the same for both first and second story, In 1905 the addition of steel cells to separate the inmates, the interior of the jail has remained the same since the addition in 1905. Prior to that time there was only one large room with hay in the corner for prisoners to use for a bed. Men were housed in the lower floor and a staircase was on the outside of the entrance that allowed women to eventually have housing in the second story, this permitted women to bring their children with them to jail for care.

Through the years the jail has housed many interesting guests including Captain Robert Quinn, British Frigate Captain, entered the Bay of the Albemarle Sound in 1781 during the revolution on a schooner ship and began confiscating boat or destroying property until citizens rallied together taking into custody the schooner and the Row Galley as well as Captain Quinn returning boats to their owner and placing Captain Quinn in the Edenton Jail.

A more historic event involved the August 1831 “Revolt of Nat Turner”, the incident that took place in Southampton County Virginia, taking the lives of white slave owners and their family’s caused terror in Chowan County who feared the same could happen within their town. This fear lead to the jailing of 21 blacks in suspicion of “Conspiracy to rebel and make insurrection”, of these 21 men jailed 8 were indicted, one mans, Godfrey went to jail and later found innocent with a jury trial. The judge declaring, “if he is innocent, all are innocent.” All the inmates were release and charges dismissed against them.

The Inmates at the time 1825 jail was in operation were cared for by Jail Keeper whose house was built between the jail and the courthouse for a cost of $2,050, the “Jail Keeper” and his wife were required to have certificates as qualified and trained Keepers, this was necessary because the jailer could be called for Deputy Sheriff duties and his wife would resume his responsibility as jailer. The was paid $0.30 cent for each inmate while in jail and another $0.30 when released from jail. The food was provided by the jailer wife on an allotment of $3.00 per day for each inmate.