The Khalil Gibran Plaque is dedicated to a Lebanese American poet, philosopher and writer Khalil Gibran. Located in Copley Square, the site memorializes one of the key figures in Arabic and American literature, whose inspiration, mentors and literary works came from the city of Boston. The plaque depicts a portrait of Gibran holding a copy of his literary masterpiece - "The Prophet." Dedicated in 1977, the plaque was designed by the poet's nephew, 44 years after Gibran's death. 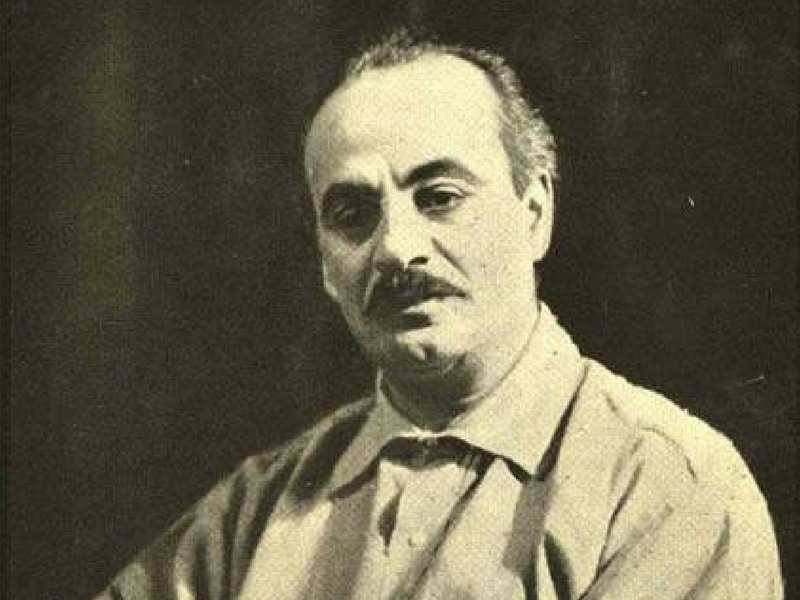 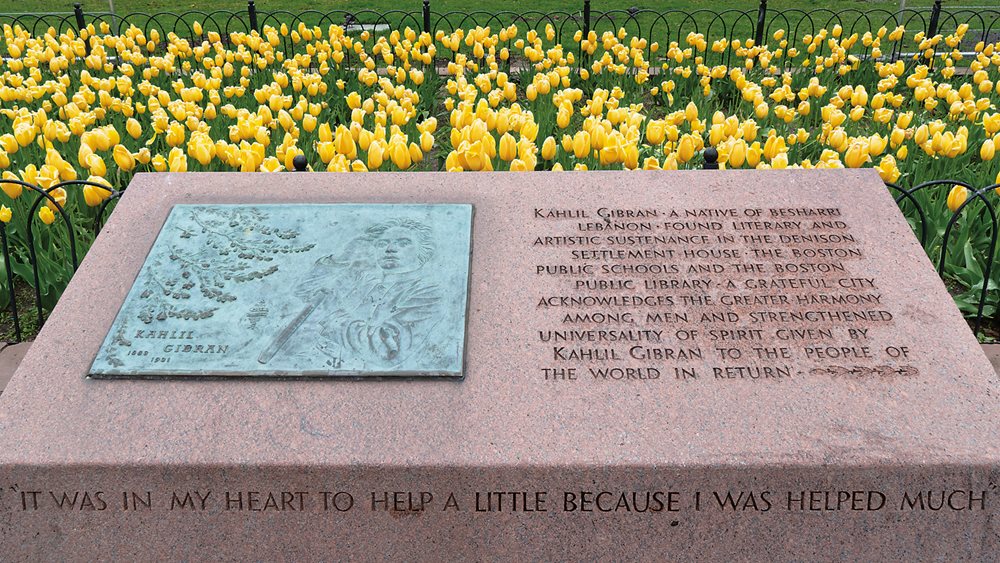 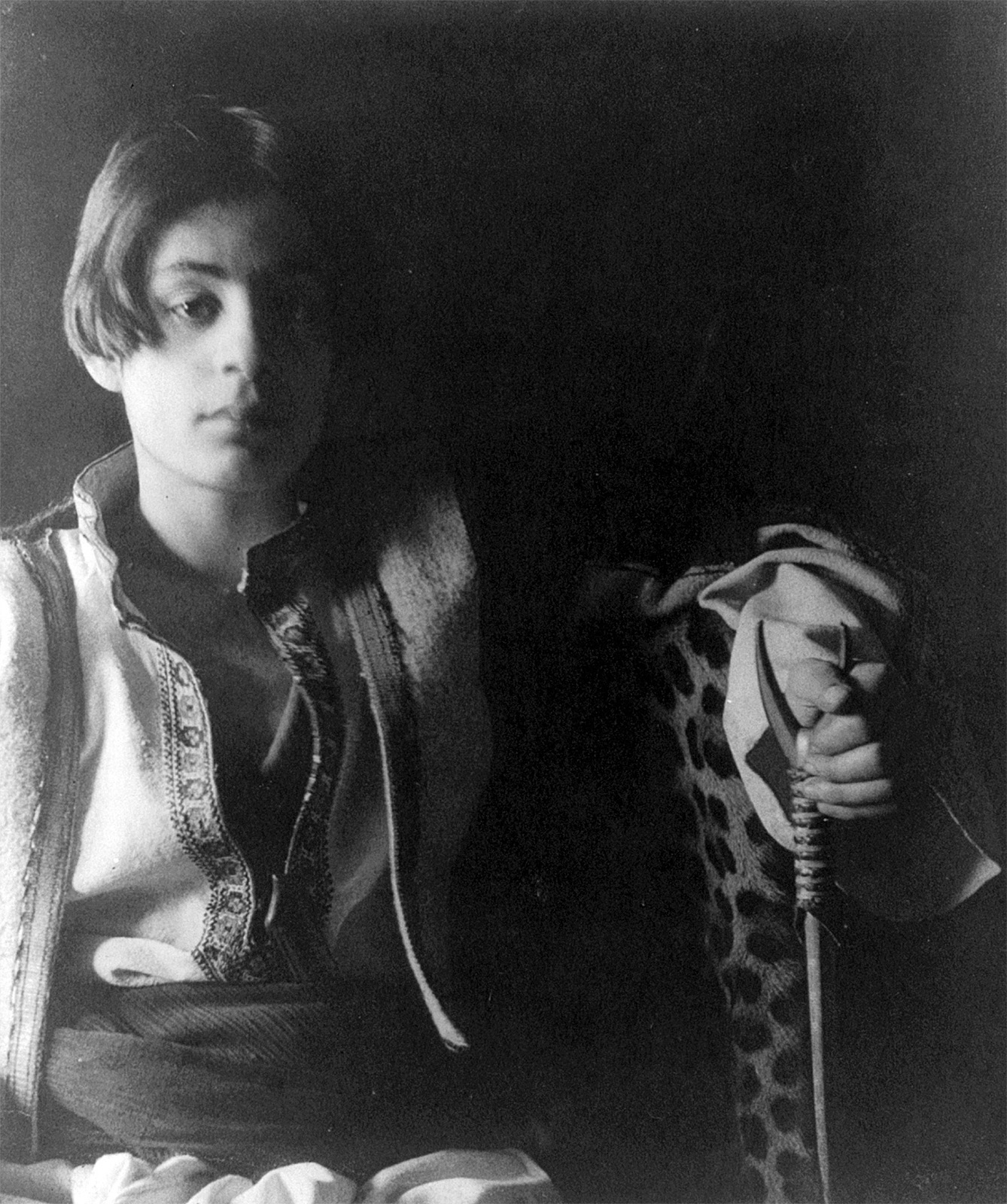 Khalil Gibran was born in 1883 in Bsharri, Lebanon to a Maronite Christian family. He had a half brother, Butrus Rahma, and two younger sisters, Sultana and Marianna. In 1895, seeking a better life, Gibran’s mother, Kamilla, decided to move to the United States, taking the children with her. Gibran's family was among other families who immigrated to other countries in the three decades before World War I. They arrived in New York and went on to Boston, where they settled in the teeming immigrant slums of the South End. At the time, Boston was known as the “Athens of America” and had a thriving intellectual community, which embraced Transcendentalism. This movement rejected materialism, embraced women’s rights and the sanctity with nature - themes that will, later on, be reflected in Khalil Gibran’s literary and art works. His mother became a peddler, which was common for immigrants but was soon able to open a small shop with her oldest son. While Gibran's sisters helped at the shop, he had an opportunity to go to school, where his artistic abilities flourished. Despite having no prior knowledge in the English language, he learned quickly, although his writing remained erratic.

The school was located across the street from Denison House, a settlement house, where he attended drawing classes. There he met Fred Holland Day, the eccentric leader of a Boston avant-garde group - the Visionists. A pioneering art photographer, Day produced elegant homoerotic photographs of young men and offered Gibran to become his model. In exchange, Day introduced Gibran to English literature, lent him books and directed him to the Boston Public Library, all of which significantly improved his language and fostered his learning. During his time in Boston, he also met a Cambridge poet, Josephine Prescott Peabody, which later resulted in an intense relationship. She encouraged his writing and art and gave him the nickname that he would later use as a title of his most famous book, The Prophet.

Gibran found inspiration in many of Boston’s cultural institutions, including the opera, the theater, and art galleries. His talent was supported by the local mentors, which not only included Fred Holland Day and Josephine Prescott Peabody, but also headmistress Mary Elizabeth Haskell, and Lebanese painter Youssef Howayak. However, Gibran’s mother became concerned with his acquaintances and their influence on him and sent Khalil back to Lebanon. There he could study independently, read widely in Arabic and French literature, start a school poetry magazine, and win a poetry contest. Several of Gibran’s works of fiction—including the novella The Broken Wings, 1957, are set in Beirut and other parts of Lebanon around this time.

When Gibran returned to the United States, his writing talent became noticeable. In 1904, Ameen Guraieb, the editor of the New York Arabic newspaper al-Mohajer (The Emigrant), hired Gibran to write a weekly column. In his "prose poems," he explored themes of loneliness and spoke to the experiences of Middle Eastern immigrants in the New World. Four years later Gibran traveled to Paris to study art. During that time he made a series of portraits of famous artists, including Auguste Rodin, a French sculptor, who, according to Gibran, had a huge influence on him. In Paris, he also encountered the works of the German philosopher Friedrich Nietzsche, several Syrian political exiles, and the Lebanese American writer Amin Rihani, all of who had a major influence on Gibran’s writing. When he ran out of money, he returned to the United States and settled in New York, where he grew more politically active. Unable to accept the pacifism that was popular among his American colleagues during World War I, Gibran became an active member in the Syrian nationalist group and put efforts to help the starving people of his homeland.

Throughout the upcoming years, Gibran would write a number of his famous works including The Madman (1918), The Forerunner (1920), The Broken Wings (1922) and Jesus, the Son of Man (1928). His writing style remained highly romantic and expressive of his deeply religious and mystic nature. The most popular work, The Prophet (1923), is a collection of twenty-six prose poems, each of which deals with themes such as “Love,” “Freedom,” or “Prayer.” The Prophet, also depicted on the Khalil Gibran Plaque, tells about the prophet named Almustafa who prepares to leave the city of Orphalese, where he has lived for twelve years, to return to the island of his birth. The people of the city gather and beg him not to leave, but the prophetess Almitra, knowing that his ship has come for him, asks him instead to tell them his truths. The people ask him about the great themes of human life: love, marriage, children, giving, eating and drinking, and death. The earlier books include Gibran's own illustrations, which add to the power of the work. It turns out that The Prophet was not written in some faraway land as one might assume from reading it, but in Buzzards Bay, Massachusetts. The Prophet was translated into 40 languages, and more than 100 million copies were sold. “My entire being is in The Prophet,” wrote 40-year-old Gibran. “Everything I have ever done before was only a prelude to this.”

The Khalil Gibran Plaque marks the poet’s important place in Lebanese as well as American literary history. It is in part a testament to the McKim building (Boston Public Library) across the street, where Gibran educated himself in his early years. The bronze plaque reads: “It was in my heart to help a little, because I was helped much,” a quote excerpted from a letter that accompanied Khalil Gibran’s generous bequest to the Boston Public Library. Gibran remains one of the few writers who broke with the old conventions of Arabic poetry and is a key figure in both Arabic and American literature. Gibran’s works are still read, admired and taught across the world.