The Church of Saint Mary the Virgin

Established in 1868, The Church of Saint Mary the Virgin became the Episcopal parish church for what was then a residential neighborhood in Midtown Manhattan. The inspiration for creating the church was born in the Oxford Movement, which sought to revive Catholic doctrine and practice. The church was initially located at 228 West 45th Street (currently the Booth Theatre). After outgrowing this location, construction on the present-day church began in 1894 and was completed in 1895. The new Church of Saint Mary the Virgin was constructed using what was then a new architectural technique – employing the use of an iron skeleton to support the structure. A similar method was later critical to developing Manhattan’s first skyscrapers (the Flatiron Building, for example, was made possible using a steel skeleton). As the neighborhood transitioned from residential brownstones to theatres, hotels, businesses, and the modern-day Times Square, Saint Mary the Virgin remained with an ongoing commitment to “open its doors to all people.”

The nave of the Church of Saint Mary the Virgin, completed in 1895 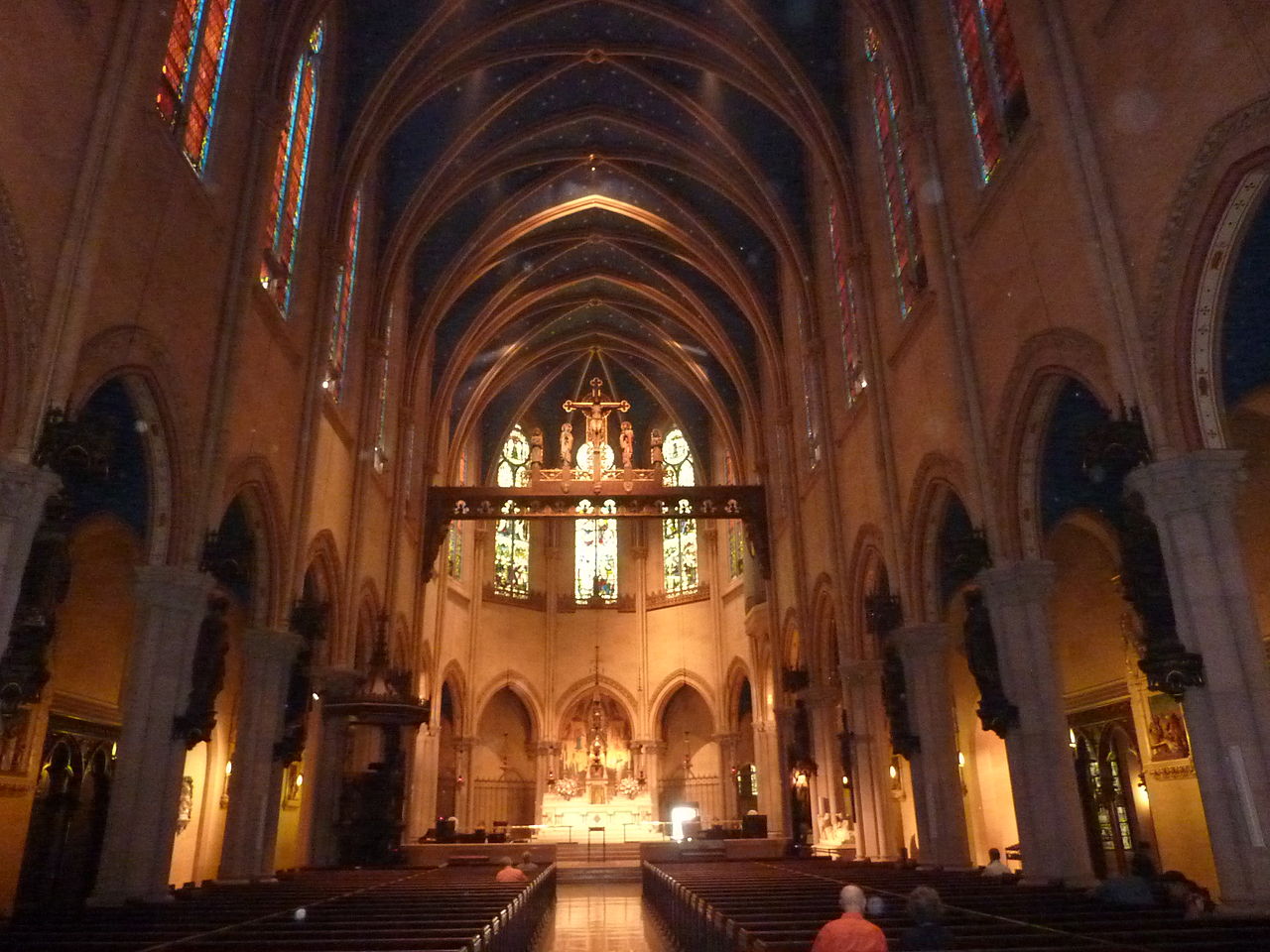 Founded in 1868, The Church of Saint Mary the Virgin was established as the Episcopal parish church for what was then a newly residential neighborhood. The area, which is now considered Midtown Manhattan, was known as Longacre Square at the time of construction. Long Acre in London was known for its horse-coach industry. The same industry was prospering at the time in this area of New York, prompting the name, “Longacre Square”. The area was renamed Times Square in 1905 after the New York Times completed its building at the intersection of 42nd Street and Broadway.

The official history of the church began on December 3, 1868 when it received its incorporation certificate from the New York State Supreme Court. However, the inception of the church may be traced back some five years prior. Only July 14, 1833 John Keble’s stirring sermon at the University of Oxford laid bare the apostasy of the Church of England. Later known as the Oxford Movement, this desire to recover the Catholic heritage was felt strongly on both sides of the Atlantic. A young priest named Thomas McKee Brown was inspired to build a Catholic church in New York City. Father Brown brought his idea to the Right Reverend Horatio Potter VI, Bishop of New York who supported the construction. Land for the Church came from John Jacob Astor with the stipulation that the church must be “free and positively orthodox in management and working." Free in this context meant that no parishioner could be charged for pew rents. Father Brown accepted the offer and the church’s cornerstone was laid at 228 West 45th Street on April 6, 1868. The Church of Saint Mary the Virgin was located at 45th Street from 1870-1895. This is the present-day site of the Booth Theatre. On December 8, 1870 the church was dedicated, and Father Brown became the rector during the Feast of the Conception of the Blessed Virgin Mary.1

Money continued to be a problem throughout the church’s history. The parishioners were not poor though, and most in the Longacre Square lived in brownstones. As pew rentals were forbidden, the church had an unsteady income that relied solely on the collection plate and generosity of trustees. By 1890 the congregation had outgrown the church on West 45th Street. Miss Sara L. Cooke, a member of the parish, left an amount of several hundred thousand dollars to the church in 1892. Using this fund, the trustees sought an eight-lot block of land on which to build the new church. They settled on 46th and 47th Streets, midway between Broadway and Sixth Avenue at a total cost of $220,000. Preparation for disposal of the first church began in 1894. Although John Jacob Astor had given the parish this land for free in their original agreement, Astor’s son (William Astor) insisted on paying the church for the fair market value of the land, some $76,000.

The cornerstone for the present-day church was placed on December 8, 1894 and construction was completed in December 1895. The new church was designed in the French Gothic style with seating for 800 and included a rectory, clergy house, and mission house. The architectural firm Napoleon LeBrun & Sons was hired to build the new church and according to the New York Tribune’s description, the church, “was to be 60 feet wide and 180 feet long. The nave was to be 80 feet from floor to ceiling and 46 feet wide, surrounded on the east and west sides by 22 stone piers forming the interior support for the clerestory." Building a church of this height and scale required a new construction method, "rather than using masses of stonework to support the walls and roof, the church was built around a skeleton of iron beams that would bear the weight but create little bulk" (A Short History). A similar technique later allowed for creation of the first skyscrapers, such as the Flatiron Building, which utilized a steel skeleton to support the outer stonework. The first mass in the newly constructed church was an invitation only event led by Father Brown. Crowds numbering in the hundreds gathered outside the church to celebrate the occasion.1

The neighborhood has changed drastically in the times following that first mass. The subway system opened, theatres moved in, and residential properties gave way to office buildings and hotels. In the 1960s and 1970s the church stood out as “a Catholic witness in the midst of a sometimes dangerous and harsh part of Manhattan." The church is still operational, with daily mass led by the current rector, Reverend Stephen Gerth. Saint Mary’s continues to live by its philosophy to “open its doors to all people”. The church describes itself today as a diverse and inclusive community, “we are families and single persons, young and old, black, white, Asian, Hispanic, gay, straight, conservative, liberal, and certainly a few who would define themselves as ‘post-labels.'"1