Built in 1869, this handsome building, which is now Camden's public library, is an excellent example of Greek Revival and Italianate architecture. It is named after Andrew Thomas, a prominent figure at the time who worked as a banker and grain dealer. He was also a Jackson Township Trustee and a founder of the Camden Bank. The home was added to the National Register of Historic Places in 1984.

The historic Andrew Thomas House was built in 1869 and is now a library. 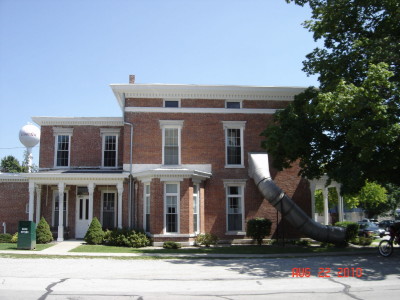 After Andrew Thomas died, another man named Philip Ray bought the house and married Thomas' widow. Ray died in 1922. The house then became a parsonage for an Episcopal church in 1925. In the 1940s, it was a municipal office building and became nursing home until 1968. Trustees of the library bought it a year later.

The library was founded in 1928 and opened its first location in a pharmacy a year later. It moved to another building in 1950 where it remained until 1969.