Designed by famed architect, Frank Lloyd Wright, and built in 1951, the Zimmerman House is one of the few examples of Prairie Style architecture in the Northeast, another being the Toufic H. Kalil House located nearby. The Zimmerman House is also a fine representation of Wright’s Usonian style. That is, small, modest, affordable homes that blend into their natural surroundings. This particular Wright home was built for Dr. Isadore and Lucille Zimmerman who lived in the home until 1988. It was then donated to the Currier Museum of Art which opened it to the public in 1990. The Currier operates guided tours of the house, which was added to the National Register of Historic Places in 1979, that begin at their museum.

The front or private side of Wright's Zimmerman House with its main entrance and small windows. 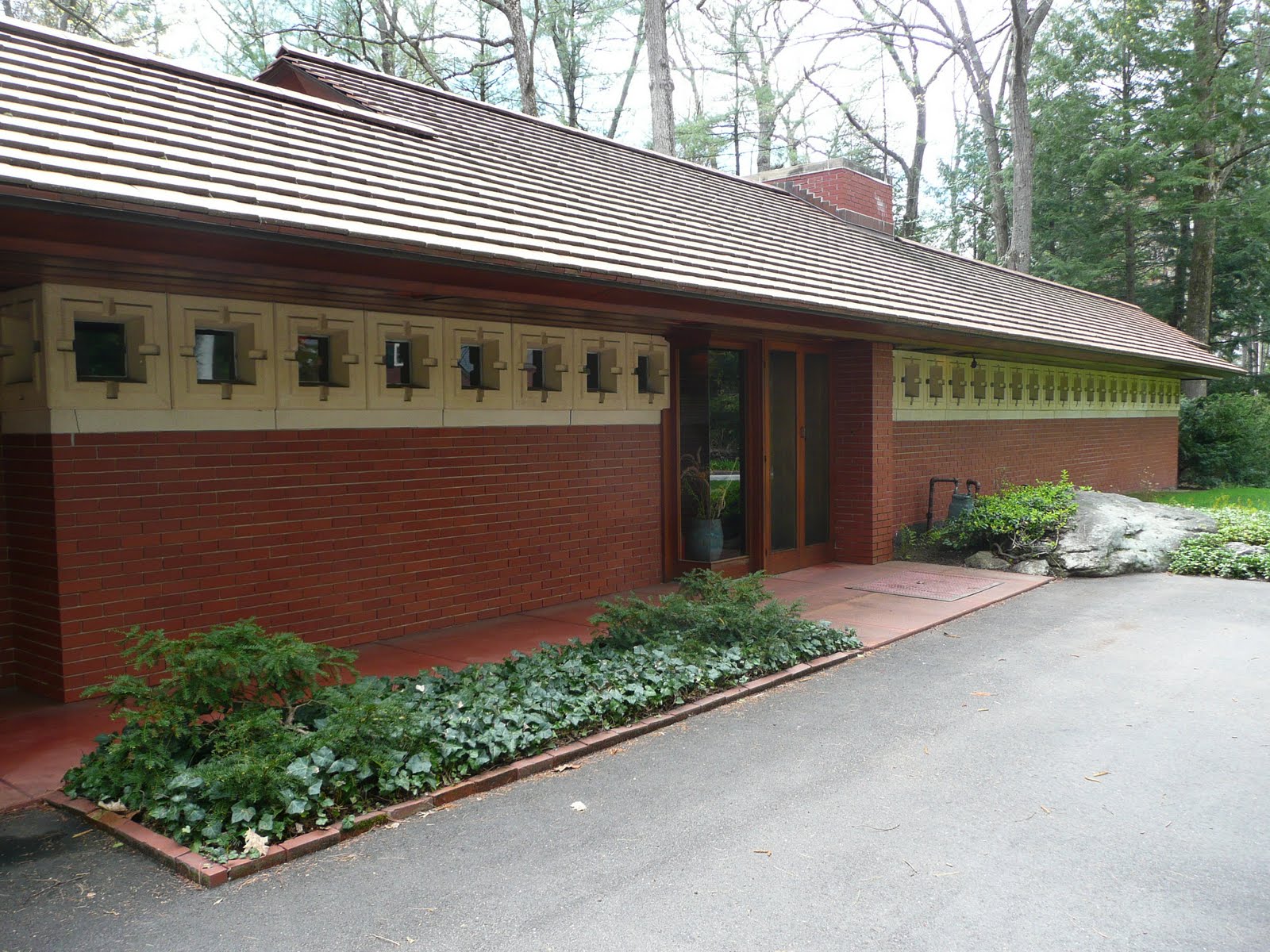 The back or private side of the home with its large plate-glass windows and doors providing a connection to the outside.

The living area within the home with its Wright designed interior. 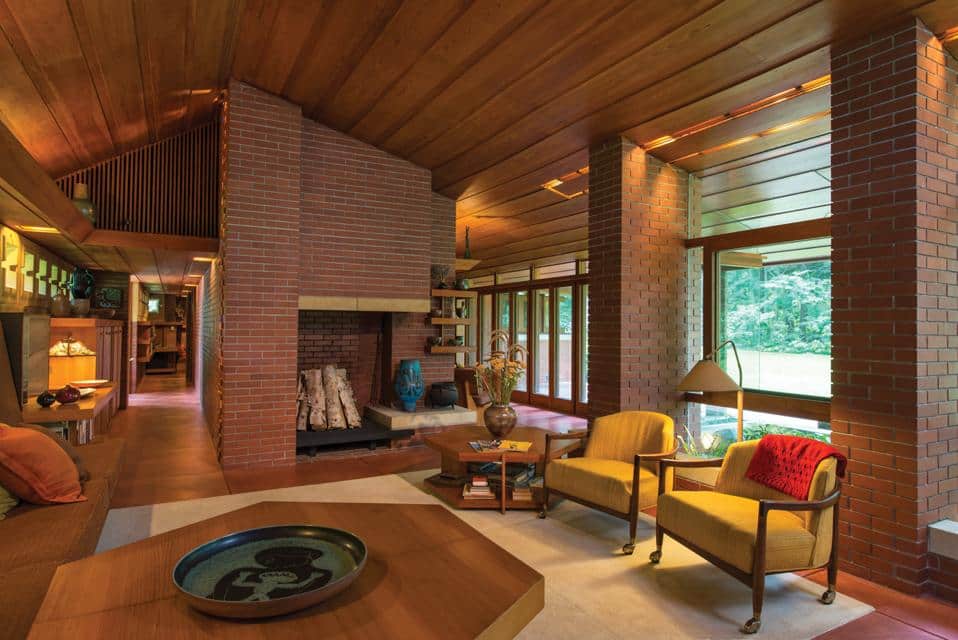 The music room within the Zimmerman House. 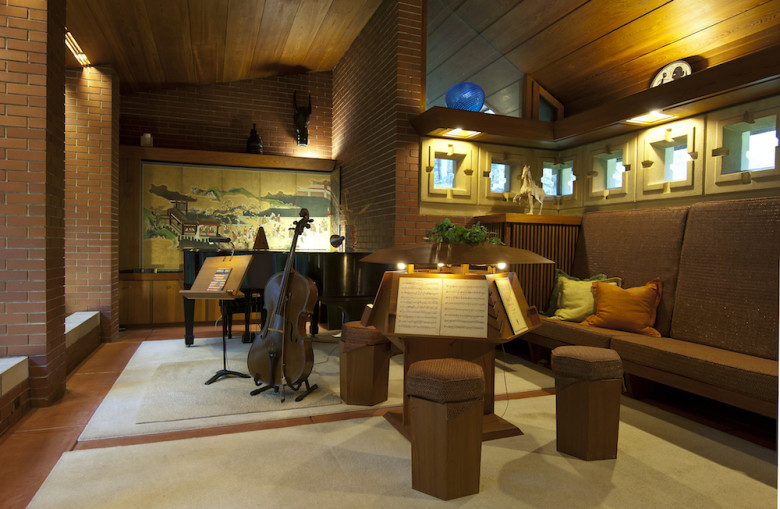 The home's carport, a term thought to have been coined by Wright. 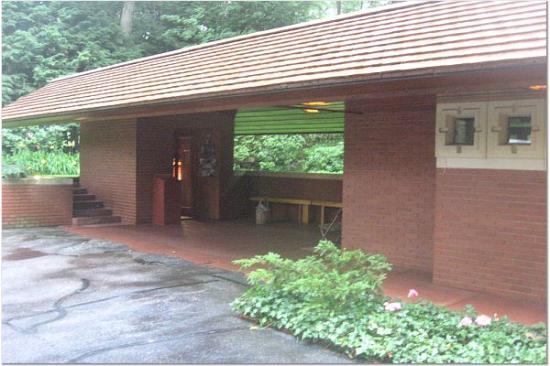 A model of Wright's Zimmerman House.

Perhaps America’s best-known architect, Frank Lloyd Wright (1867-1959), adopted, promoted and utilized the Prairie Style of architecture in numerous structures. The Prairie School began in the Midwest in the late 19th century and was a direct reaction to the Columbian Exposition that took place in Chicago in 1893. American architects, like Wright, were appalled by the exclusive Greek and Roman designs utilized at the Exposition, rather than American designs and they sought to rectify that problem. Wright and others created a uniquely American style of architecture that mimicked the large, wide, flat expanses of the Midwest. Their style featured horizontal lines, flat or hipped roofs, wide overhanging eaves, windows in horizontal rows, excellent craftsmanship, integration with the landscape and limited ornamentation.

Wright than combined the Prairie Style with his Usonian ideas that encompassed economical, efficient and compact housing for the American middle class. To that end, Wright designed various Usonian homes from the 1930s through the 1950s. These homes, while all different, featured similarities, such as being of a single story and usually in an L-shape built around a garden. They were also built of natural materials with flat roofs, cantilevered overhangs, natural lighting, radiant-floor heating and little exposure to the public on the front side while the private or back side was integrated with the outside, usually through large glass windows and doors. The Zimmerman House features many of these components.

The Zimmerman house, built in 1951, is a single-story structure built of brick with wooden support beams. Wright designed every aspect of the home, to include its interior, built-in furnishings, gardens, and even its mailbox. Its hipped, flat roof overhangs the structure, especially on its front side, which also features a single row of small, rectangular windows set above eye level to ensure privacy. At only 1,458 square feet, the home is centered around a large, L-shaped chimney and rocky outcropping near the front entrance. Its interior rooms, to include its two bedrooms, are aligned along a single axis with a carport at one end. The interior, built largely of Cypress wood, remains largely unchanged from when the Zimmermans occupied the home.

Wright also believed that his structures should look as if they grew naturally from the surrounding landscape, or, as he put it, the structure should be “…married to the ground.” Wright referred to this style as “organic architecture” and the Zimmerman House is a wonderful example of it. Wright also liked to make a connection between his buildings’ interior and exterior spaces, and the Zimmerman House utilizes large plate-glass windows and doors on its private side to achieve this connection. Other than its low-slung nature, one might think, when viewed from the public and private sides, that the Zimmerman House was actually two separate homes.

The Zimmermans lived in the home for over 35 years. During that time, they altered the home very little. They enjoyed collecting pottery, small sculptures and Japanese art and they donated many of those pieces along with the home to the Currier Museum of Art in 1988. The museum spent over a year refurbishing the house and opened it to the public in 1990. Access to the house is only granted via guided tours through the Currier. Tickets must be purchased in advance, so please call or visit the museum’s webpage for tour dates and times.