Designated a National Natural Landmark in 1965, the Odessa Meteor Crater is a large, 500-foot wide cone-shaped meteor crater near Odessa, Texas. It is the second largest meteor crater in the country and the sixth-largest in the world. The site consists of the main, large crater four smaller ones. The large crater is the only one still visible; the other four are now buried. Around 62,000 years ago, a meteor shower of consisting of thousands of nickel-iron meteorites fell on an area of two square miles. They varied in size; most were small but some were quite large. The largest one displaced around 100,000 cubic yards of earth and rock. The smaller craters are believed to be between 15-70 feet in diameter. The meteorites that created these craters are still located deep beneath the surface. The meteor that created the large one was never found. Geologists determined that, because it was traveling at such a high speed, it vaporized upon impact. The site consists of a parking lot, a shelter with a picnic table, and a small museum.

Diagram showing the layers of earth and rock, as well as the shaft that was dug.

The museum displays meteorites and other objects related to meteor craters. 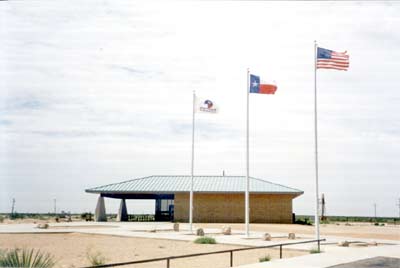 Local rancher Julius D. Henderson first spotted the large crater in 1892. It was thought that it was created by a gas blow-out hole. However, it wasn't until many years later that geologists began to take a serious look at the site. Geologist Elias H. Sellards happened to find the crater while searching for potash. Word about the crater spread and other geologists studied the site as well. Finally, in September 1939, a 165-foot deep shaft was dug to locate the meteorite. However, as noted above, it was not found. The walls Meteor fragments were found at the site, including the largest one which weighs 300 pounds. The shaft was lined with timber walls and had ten levels. A fire destroyed the timber in the early 1950s and the shaft was sealed off with concrete slabs.

Over time, the crater filled up and is now only 15 feet deep. After impact, it was approximately 100 feet deep. The site was donated by the Texas Pacific Land Trust to Ector County in 1979. The museum was opened in 2002.