Built in 1887, the White-Pool House is the oldest surviving building in Odessa. It is named after two of the families who lived there, the Whites and the Pools. Constructed by Charles White and his family in 1887, the house is a simple but well-designed Victorian home. It has been a historic house museum since 1986 and features many original furnishings on display. Today, the home also serves as an event venue. It was added to the National Register of Historic Places in 1980.

The White-Pool House was built in 1887 and is the oldest structure still standing in Odessa. 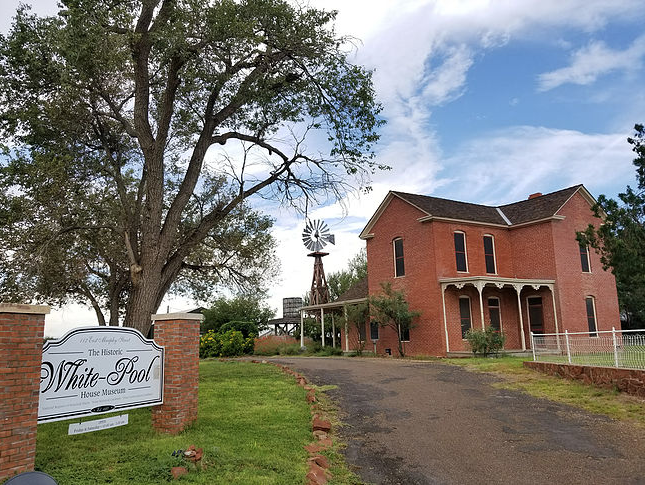 In mid-1880s, Charles and his family came to Texas from Indiana, where their grain business was failing in the post-Civil War period. His wife, Lucy, also needed a dry climate to improve her health. Another factor was that the Texas and Pacific Railroad, which had obtained land grants from the state, promoted the area for settlement. Charles established a general store and also built an irrigation system, which the railroad used in its advertising. Lucy, who was a devout Christian, helped start a Little Union School. One of their sons, Wilfred, became the town's first postmaster. Lucy and one of their other son, Herbert, moved to another town in Texas after Charles passed away in 1905.

A succession of owners lived in the house before Oso Pool bought it in 1923. Oil had recently been discovered in the area and this attracted more people to Odessa. Hoping to take advantage of this influx of new residents, he converted the house to a five-room apartment building. He also established the Pool Family Real Estate Company, buying land south of Odessa and then selling individual lots. The house remained in the family for 50 years before Oso donated it and six acres to Ector County in 1978. In 1986, the White-Pool House Friends non-profit was established to preserve the old home.