Established in 1927, the library was dedicated to Andrew Bayne, a political elected into the General Assembly in 1838 and the elected Sheriff go Allegheny County, Pittsburgh, PA in 1838. The streets bounding the library's property, Teece Avenue and Balph Avenue were named after Bayne's two daughters, Amanda Bayne Balph and Jane Bayne Teece. Both sisters owned parts of the land, and after their deaths, the property was given to Bellevue Street, which was converted into the library and the accompanying that still stands today. Currently, the library has access to 14,000 books, 30 magazine subscriptions, 1,000 DVDs, and eight computers. Some individuals have said that the library is haunted bye the ghost of Amanda, who is a mischievous yet friendly spirit that pulls pranks on visitors and the library's employees. 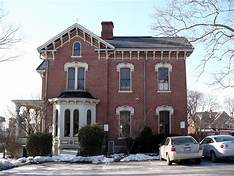 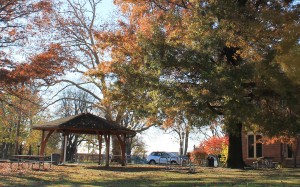 Andrew Bayne: The Man Behind the Library 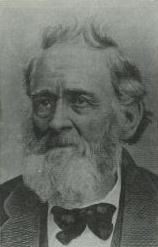 Amanda Bayne Balph: The Lady of the Library 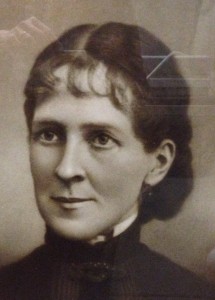 Andrew Bayne, and his wife, Mary Anne Matthew Bayne were one of the original families when Belleuve was incorporated into the Pittsburgh area in 1869. Bayne was a local politician that was elected into the General Assembly in 1831, took part in the Constitution Conference between 1837-1838, and was elected as the Sheriff for Allegheny County, Pittsburgh, PA. Bayne purchased over 100 acres of land north of the city, and he gave two acres of land each to his daughters, Amanda Bayne Balph and Jane Bayne Teece. In 1875, Amanda with the help of her husband, James Madison Balph, a popular architect in the area built the Victorian-style home on their property. After Jane died in 1896, Amanda acquired her land, and later in 192, Amanda died, and the property and house became borough property for Belleuve to convert into a public library. Also, for their contributions, the streets surrounding the property were named after the sisters, Balph Avenue and Teece Avenue.

Beginning in 1914, a Library Committee formed by George F.P. Langfitt, A.E.Hummel, and J.B. Arthur, and the committee began constructing bookshelves along the walls of the dual parlors within the house, accepting book donations for the shelves to be filled, planting flowerbeds, and paving walkways for the park. On Memorial Day in 1927, the Andrew Bayne Memorial Library and Park was officially opened to the public and over 954 residents applied to be library card holders. During the time of its reconstruction and renovation, the Belleuve Federation, a women's organization, cleaned and furnished the rooms. Later, the rooms were used to house the donated artworks of John A. Herman Jr., which now comprises the John Herman Museum. In 1921, the Mothers of Democracy dedicated 12 trees to 12 soldiers who lost their lives during WWI, and then a 10-ft statute of a WWI soldier was unveiled north on Balph and Teece Avenue.

Outside of the library, there is the Jim Porch Gazebo, which offers picnic benches, beautiful views of the park, and access to playground equipment. In addition to the park, there is the Belleuve Skate park, a modern skateboarding park. As of today, the Andrew Bayne Memorial Library has over 14,000 books,1,000 DVDs, 30 magazine subscriptions, eight computers, and Internet access. Interestingly, there have been reports and testimonies of ghost sightings of Amanda within the library. Some speculate Amanda's spirit is somewhat peeved about the Lone Sentinel, a 400 year-old elm tree and other elm trees being torn down from the property due to the fact that were weakened by Dutch elms disease. However, Amanda is nothing more than just a mischievous, friendly spirit who pulls pranks on visitors and the library's employees, such as turning the lights on and off, making DVD players stall, making the ceiling fan whirl, appearing out in the open of the library's quarters, and opening and shutting doors.