The first exhibit hall is dedicated to the Grand River area's beginnings. A newly designed Native American exhibit "A Point In Time" funded by a grant from the Missouri Humanities Council, contains stone tools collected in the Grand River region. The exhibit also features a mural of the Missouria Indians, painted by Kelly Poling, area muralist and artist. Next to the Native American exhibit are artifacts brought to the Grand River region by early settlers including a wagon bow, a loom, spinning wheels, and a gun collection. Also included in the first exhibit hall is a jail cell from the original Chillicothe jail, a Railroad exhibit with working train whistles, a bank teller station from the bank teller school, a Linotype machine, and an early telephone switchboard and telephone booth. The second exhibit hall was opened in May of 1977 and was remodeled in 1978-1979. It was constructed through a matching fund drive with the Hedrick Foundation. The west side of the hall contains a "Mom and Pop" grocery store, Doctor and Dentist offices, newly refurbished Chillicothe High School and Chillicothe Business college exhibits. The new "Grandma's House" contains room settings representative of a 1900s era house including a parlor, kitchen, bedroom, bathroom and hallways. There are also exhibits of children's toys, and a china and glass-ware collection. The east side of the hall contains the Museum's collection of uniforms - from Civil War to Afghanistan. All of these uniforms were worn by Livingston county service men and women and all branches of the military are included. The Chillicothe entertainment section features the Ben Bolt Theater, the movie projector from the Route 65 Drive In Theater, a vintage home-made car, and a complete soda fountain from Millers - a popular downtown meeting spot, and much more. In 1998, an annex building was constructed east of the main building. It was made possible through funds donated by the Hedrick Foundation, the Roger A. Browning Foundation, and the American Legion Vern A. Glick Post 25 and Ladies Auxiliary. This building houses our antique vehicles, including the Moore Monument wagon, the Churchill Truck Lines, Inc. Ford truck, the Irvinbilt truck, and an antique fire truck that the children will enjoy. 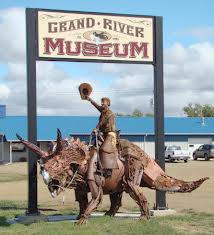