The Rummel Farm is located in Gettysburg, Pennsylvania, in the third and final day of battle while Pickett’s Charge was getting ready to start Jeb Stuart was instructed to ride around the Union Lines and try to strike them from the rear. General Stuart took the 5,000 Confederate soldiers under his command mounted and followed orders. It seemed to of caught the Union by surprise for the most part however having 5,000 horses galloping along on all dirt paths you can see them coming from miles away. The Union Army saw this and had their cavalry under the command of General Custer move to intercept. Rummel Farm was where General Custer stood his ground. This was one of the bloodiest hand-to-hand cavalry battles in all of the civil war. The Confederates had a couple of batteries set up on the back side of the farm and had taken the owner of the farm hostage, and set it up as a place of cover. Jeb Stuart had the 34th Virginia “Witchers Boys” who were mounted rifles, they used the muzzle loaded enfield pretty much making them mounted infantry and Stuart used them as sharp shooters. 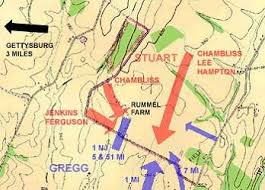 The Battle of Rummel Farm had 480 estimated casualties 230 on the Confederates side with 250 union cavalry men falling during this battle as well. The battle opened up with skirmishers from the Union and dismounted cavalry from the Confederates firing volleys at each other. General Stuart used this to buy time so he can conduct his surveillance and figure out the numbers of the Union line. Hoping to keep up his small advantage of surprise he ordered his artillery from General Gregg to suppress the Union guns being unlimbered. While the Confederate batteries opened fire, Stuart used it as a chance to unfurl his lines and get them into a position to charge into the Union line.

Stuart underestimated General Custers batteries that he had with him. It turned out that the Union batteries were more accurate than the Confederates guns and started to gain the upper hand, as it started to knock each battery out. While the batteries were dueling back and forth, the skirmishing in the field surrounding the farm continued, as those involved slowly started to dwindle down their ammunition supplies no real advantage was gained. Stuart beginning to become fed up with the lack of progress ordered a mounted charge which was met by a volley of Union artillery forcing them to retreat and was then met with a Union counter charges. This continued throughout the day until Ammo fell to pretty much nothing, this was due to the fact that when Stuart decided to ride he didn’t expect any opposition and ordered his men to only carry 50 rounds on their person.

Stuart ordered a final push at the end of the day trying to overcome the embarrassment he had endured the night before after the tongue lashing he got for “joy riding” by General Lee. Seeing the Grey Column advancing towards him General Custer rode to the 1st Michigan which he commanded and yelled his memorable line “Come on you Wolverines” as he turned towards the advancing grey columnn and the 1st Michigan followed, With Hampton’s Brigade (Confederates) and the 1st Michigan rushing towards each other they carried such force when the two forces collided men and horses hurdled through the air due to the impact of running into each other. As those two forces engaged in hand to hand combat the 3rd Pennsylvania cavalry rushed from the tree line and struck the Confederates line resulting in them to have no choice to retreat and leave the field, leaving the Union to win the Day.