Starting in 1888, the H.J. Heinz Company Complex housed the production and manufacturing of Heinz'z products, such as ketchup, mustard, horseradish, pickles, sauerkraut, vinegar, and mayonnaise. Over the next, several decades, the company expanded their horizons by implementing new ventures, such as baked beans, soups, and cucumbers, and along with these news business innovations, several more buildings were built and added onto the original factory. The business tried to maintain their motto of "51 varieties" by adding and reediting new, unique flavors and condiments. After the construction of the shipping warehouse in 1999, five buildings were bought in 2001, and in 2005, the H.J. Heinz Factory Complex integrated the Heinz Lofts was built using rehabilitation tax dollars. Today, the Heinz Loft is a residential sector in downtown Pittsburgh with one-hundred seventy-seven rentable living units. 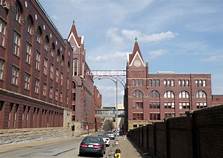 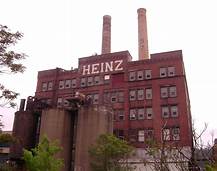 J.H. Heinz: The Man Behind the One of the Most Famous Food Manufactories in the World 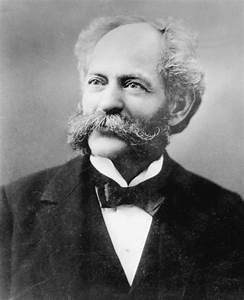 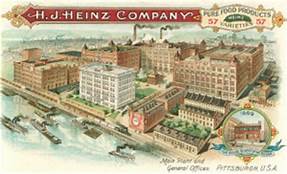 John Henry Heinz was born in 1844 to German immigrants in the south side of Pittsburgh. From an early, Heinz's mother, Anna instilled into him about empathy and doing the right thing, which he carried with him into adulthood when he began his entrepreneurship. Heinz worked with his father as a bricklayer and helped out with the family gardening. Later, Heinz allocated some land at ten years-old, and he bang marketing his produce to his neighbors and the local markets through a horse and buggy. Heinz's first foray with business is with horseradish, which he bottled in his family's basement. In 1869, Heinz married Sarah "Sallie" Sloan Young, and later partnered with L.C. Noble and produce an abidance of products, such as pickles, sauerkraut, and cucumbers from their eight-hundred acre land in Illinois. However, things took a drastic turn when Heinz filed for bankruptcy in 1875, and it took him years to bounce back and make profits through his "recipes products," which are ready to eat out the can foods.

In 1888, Heinz supervised the construction of the H.J Heinz Company Complex, a combination of different building that serve different purposes for the manufacturing process of Heinz's products. During the construction of the complex, Heinz used his father's bricks. From 1906 to 1958, several buildings and areas were added onto to the factory, such as the Shipping Building (1915), Meats Product Building (1923), the Cereal Building (1926), the Reservoir Building (1926), the Service Building (1930), and the Riley Research Building (1958).The Heinz company's trademark of "57 varieties" emphasizes the different products and flavors they package and sell for the public, such as condiments, baked beans, vinegars, soups, and relishes. However, Heinz did see most of these changes as he passed away from pneumonia in 1919 at the age of seventy-four. Heinz's son, Howard Covode Heinz took over the business until his death in 1941, and Howard's son, H.J. Heinz II took succeed him.

In the 1990s, the H.J. Heinz Company Factories implemented even more additions to the complex, such as a soup and baby food processing plant and a shipping warehouse. In 2001, five of the buildings within the complex were bought by the Ferchill Group of Cleveland with rehabilitation tax dollars, and in 2005, the buildings were converted into lofts and called the Heinz Lofts. Currently, the Heinz Loftsthere are one-hundred seventy-seven rentable living quarters. Residents will have access to various amenities, such as a small cafe, a gym, a convenience store, an exercise pool, a business center with Internet and computers, and a community center for parties and events