Constructed in 1856 by local merchant and landowner Edwin Amiss, the property was later purchased by the Confederate Colonel William Henry Palmer as a summer home. Following Palmer's death, the surrounding property was subdivided and used for the construction of new homes, though the maple-lined avenue leading up to the home and approximately three acres were saved for the property. The home and three additional outbuildings were added to the National Register of Historic Places on November 13th, 1989, for being deemed architecturally significant for being a well-preserved example of antebellum affluence in the area. Namely, the house features unique elements that distinguishes it from other Greek Revival style homes in the area, such as a deep plastered frieze and a sophisticated two-story porch.

A front view of the Amiss-Palmer House 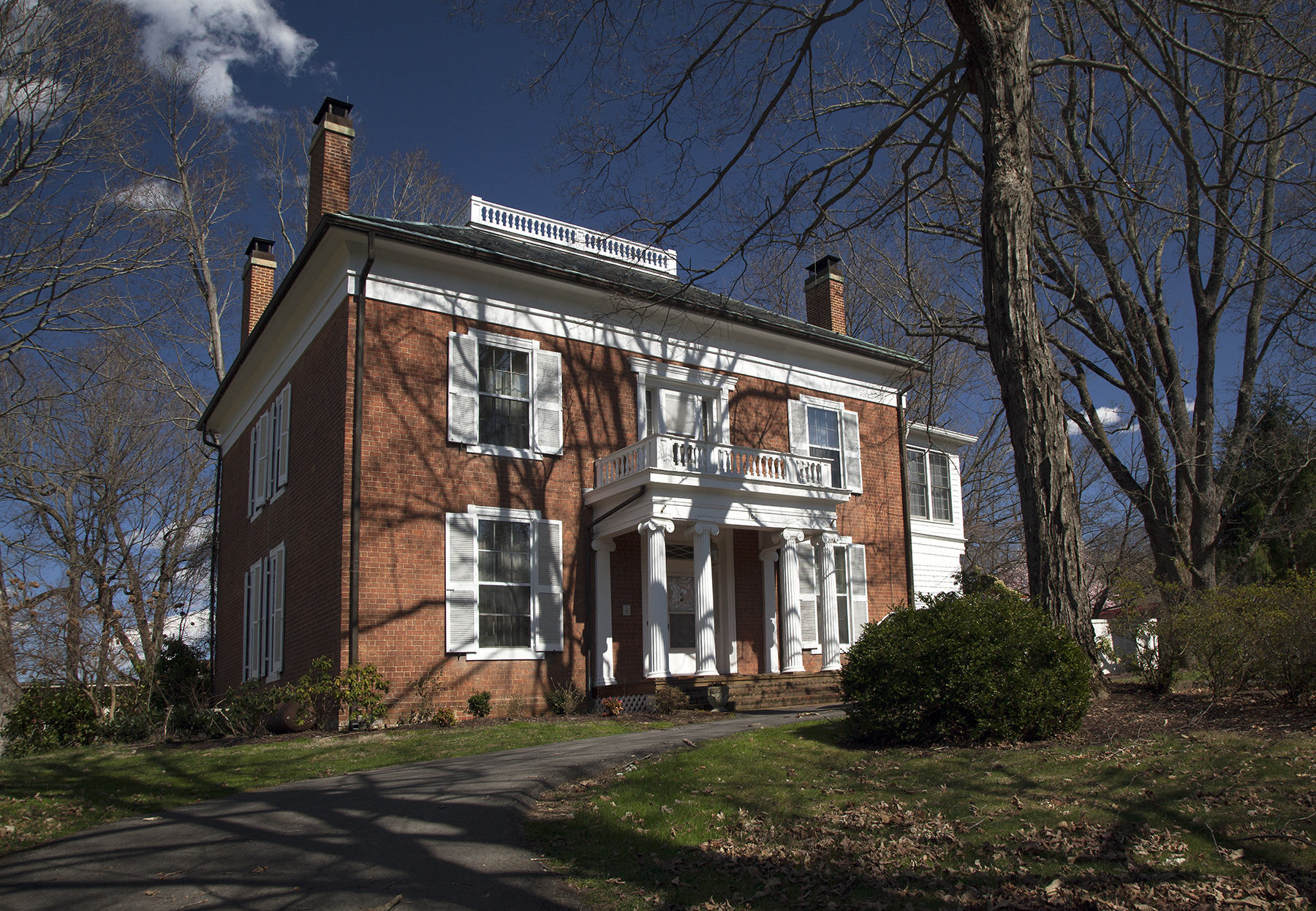 Edwin Amiss (May 20th, 1810 - August 2nd, 1880), a successful merchant and landowner, constructed the Amiss home in 1856. Upon his death in 1880, Amiss' son-in-law Colonel William Henry Palmer (October 9th, 1835 - July 14th, 1926) purchased the land and home, which he used as a summer home. During the Civil War, Palmer was a Confederate solider, who enlisted in the 1st Virginia Infantry Regiment in 1861. The following year, he was promoted to the rank of Major and was injured during the Battle at Williamsburg, and he served as president of the Southern Fertilizer Company, the City Bank of Richmond, and the Virginia Fire and Marine Insurance Company.

On March 5th, 1896, a new act to amend the previous incorporation of Blacksburg was approved, and W. H. Palmer’s property was directly referenced in this act: “[T]he town of Blacksburg, in the county of Montgomery, be, and the same is hereby, made a town corporate under the laws of Virginia as is now or may hereafter be laid off into streets, blocks and alleys within the following boundaries: Beginning at a stake in a line diving the lands of W. H. Palmer and Edward Black” (Acts 931). Following Palmer's death, the property was subdivided and used in the construction of new homes, though the maple-lined avenue leading to the home and approximately three acres were preserved for the Amiss-Palmer property.

On June 20th, 1989, the Amiss-Palmer House was added to the Virginia Landmarks Register, and the property was added to the National Register of Historic Places on November 13th, 1989, for being a well-preserved example of a Greek Revival home and Blacksburg's prominent example of antebellum affluence. The home is a two-story brick building with a deep plastered frieze, a two-story porch, and marble mantels, all features that were fairly uncommon and unique for the area. In addition to the home, there are there are three outbuildings that are preserved on the property, which include a one-story brick kitchen; a three-bay, two-story log house built approximately in the mid-nineteenth century, which was likely used for indentured servants; and a log meat house with a modern shed addition. A modern greenhouse has also been constructed on the property. The buildings on the property have been renovated and modernized to be efficiently utilized; however, exterior and important interior elements have been preserved to maintain the historic integrity of the building.

Acts of the General Assembly of the Commonwealth of Virginia, Accessed October 21st 2019. https://books.google.com/books?id=279OAQAAIAAJ&pg=PA931&lpg=PA931&dq=W.+H.+Palmer+Blacksburg+Virginia&source=bl&ots=SB72SwWaFY&sig=ACfU3U0Ngr8M7StFGw6y6vgXFVC3n2aPWA&hl=en&sa=X&ved=2ahUKEwign4nz9K3lAhUEvZ4KHVuKBzwQ6AEwBHoECAgQAQ#v=onepage&q=W.%20H.%20Palmer%20Blacksburg%20Virginia&f=false.