The Betances Mural is a colorful mosaic tile mural in Boston's South End. Made in 1979 and located in Plaza Betances, the center of the Villa Victoria housing project, it was the result of a movement to fight an urban renewal project that would have displaced the Puerto Rican residents of the South End neighborhood in the late 1960s. This was fight that the community won, leading to the establishment of the Villa Victoria neighborhood, in which improved housing was built for residents. The non-profit organization Inquilinos Boricuas en Acción (IBA), which translates to “Puerto Rican Tenants in Action” was formed and implemented steps to create the mural and many other community programs. The mural was envisioned by the artist Lilli Ann K. Rosenberg, who collaborated with community members, adults and children alike, to create a mural that honored Puerto Rican heritage and the community of Villa Victoria. The central figure of the mural depicts Dr. Ramón E. Betances (1827-1898), who was a successful Puerto Rican activist and humanitarian who fought for Puerto Rican independence from Spain and for the emancipation of slaves. Members of the community created the individual ceramic tiles. The mural’s message is that of triumphant activism and celebration of culture. Still an active organization, IBA hosts the annual Festival Betances on the Plaza, which has become an important site for community gathering. 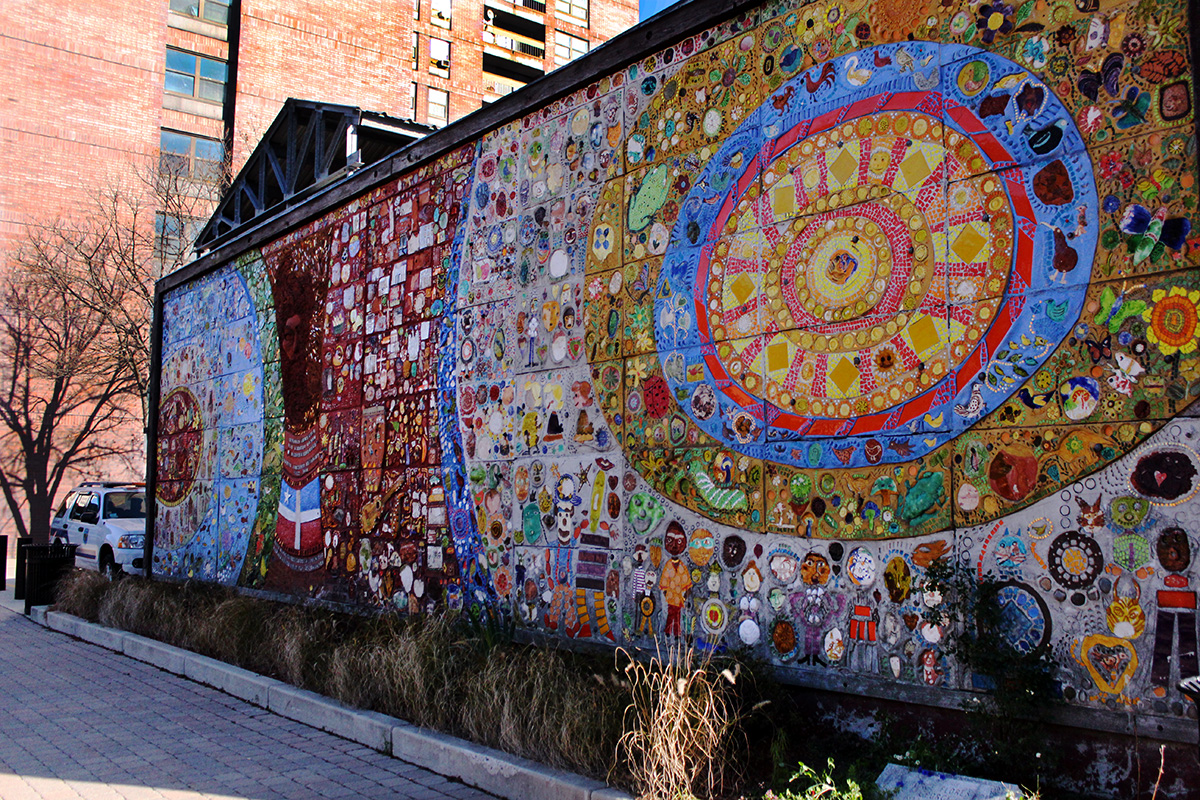 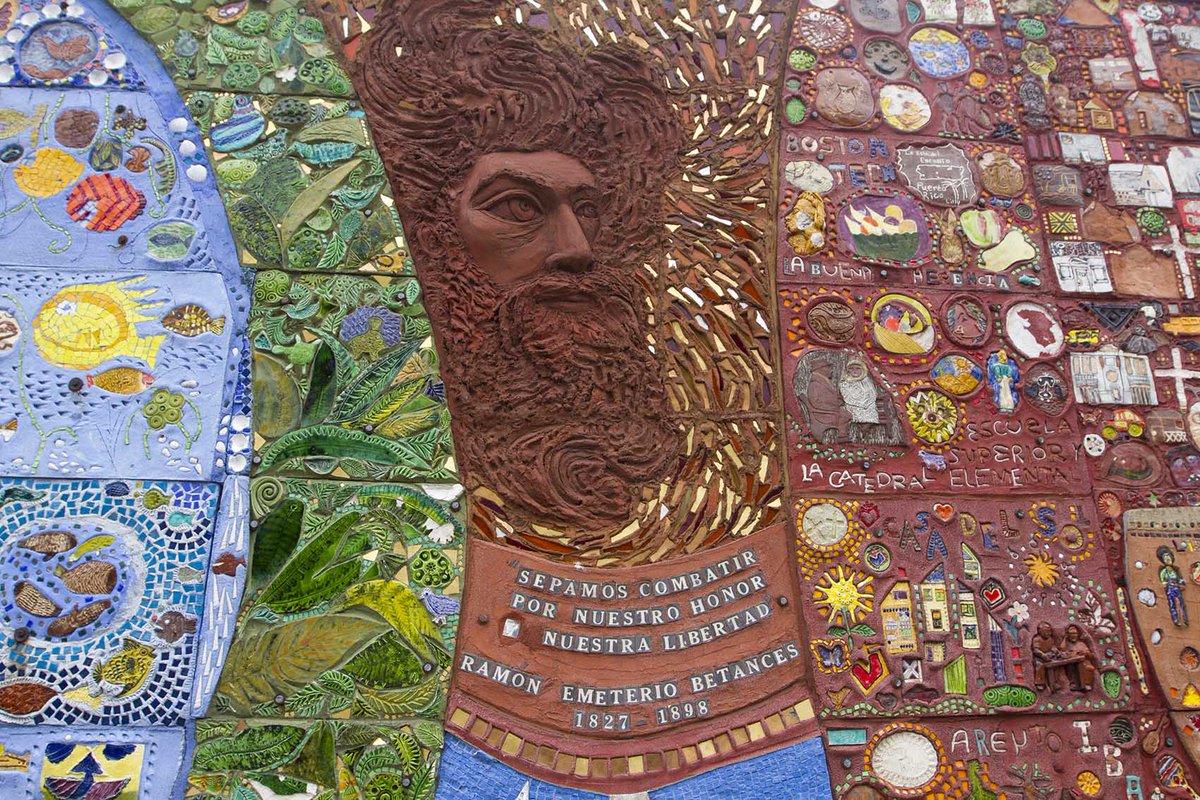 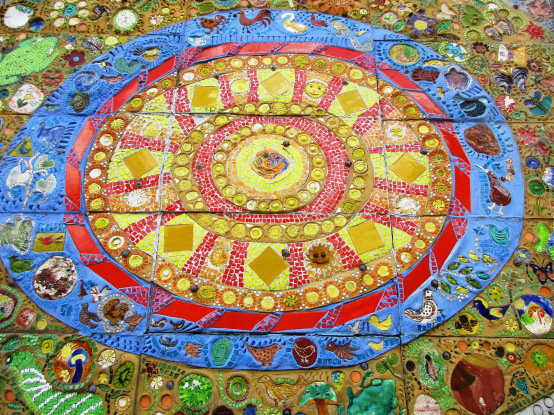 History of the South End

By 1900, Boston’s South End was populated almost exclusively by working class people and immigrants, despite the city’s attempt to turn the area into an upper-class haven in the late-1800s (Small 53). As wealthy individuals moved out of the South End into the Back Bay in the 1800s, housing in the South End became more affordable which caused the working-class population to increase. However, there was not enough housing to support the growing population. Buildings once meant for affluent people were reconfigured into small apartments not meant to withstand the number of individuals now living in them (Small 54). Ultimately, this caused housing conditions to decline, deteriorate and become unlivable. However, the South End had the most affordable housing in the city and its population became ethnically integrated as many different immigrant populations began to move in. The Puerto Rican population, which had begun to immigrate to Boston earlier in the century following the "concerted efforts of New England farming companies to recruit Puerto Ricans for seasonal, agricultural employment", was one of the more recent ethnic groups to enter into the neighborhood in the 1950s (Small 56). Many sought employment at Boston factories and many opened small businesses in the South End (Small 57). Over time, the factories proved to be an unstable form of employment. Therefore, the majority of the population was poor or unemployed, according to the 1970 U.S Census (Small 59). Still, the Puerto Rican community was very attached to and proud of their neighborhood (Small 61).

After the South End's housing condition decline in the 1950s, Boston began to implement an urban renewal plan that would essentially rebuild the South End but force entire communities to relocate due to rent increases. Many community groups rallied against this plan’s implementation, but it still caused mass displacement of poor communities (Small 75). Over a decade after the renewal plan began, a group of Puerto Ricans, called the Emergency Tenants’ Council (ETC), vocalized their fear that their homes would be destroyed as well as their concern that the living conditions were unacceptable in Parcel 19, which was the neighborhood between Tremont Street and Shawmut Avenue (Small 76). In 1968, ETC began to organize, gained support from many other city activists, and established their motto: “No nos mudaremos de la Parcel 19” ("We shall not be removed from Parcel 19") (Small 78). This became the rallying cry of the South End’s Puerto Rican community. The tenants practiced well-organized protests and rent-strikes, provoking the city to pay attention and named the ETC the developer of the neighborhood in 1969. A project implemented by the ETC replaced the original plan, and began developing the Parcel into many different housing units that were up-to-code and modernized. Formally established in the 1970s, this neighborhood is known as Villa Victoria (Victory Village). At its beginning, the newly established neighborhood was bright, renewed, attractive, and domestic.

Out of the ETC's efforts, the Inquilinos Boricuas en Acción (IBA) was formed. It began as a community service oriented organization intended to aid the well being of Latinos both in the South End and in the city as a whole. The IBA was and still is highly organized, relying on government grants and donations. They had a strong volunteer-run system in their early years, perhaps inspired by the community's early success. Many programs were formed at the IBA, such as literacy, mentoring, and arts workshops that involved both children and adults. In the late 1970s, the IBA received funding for a neighborhood-wide mural project. This culminated in the Betances Mural, acknowledging the Puerto Rican history in the neighborhood. Today, the IBA hosts an annual Betances Festival on the Plaza Betances that draws in thousands of people of Latino heritage and still runs many other community-oriented groups and projects.

The Betances Mural is a piece of public art made for and by the public. It took over a year to complete. The work is empathetic to the community's culture and vision for its future. It commemorates the victory of the ETC through its poetic allusion to Betances himself, a symbolic figure in Puerto Rican culture. Betances, as a figure for Puerto Rican freedom, references the ability of the South End's Puerto Rican community to liberate themselvesfrom injustice. Made out of ceramic tiles, its colorful conglomeration of everyday imagery, from fish, to plants, to religious symbols, to community buildings, to houses, combines into a vibrant whole. This signifies the many different voices living in the Villa Victoria projects that united to create a better way of life. These everyday images are, in fact, signs of the lives in Parcel 19 that would have been disrupted if not for the efforts of the ETC and IBA. The Plaza itself was designed to emulate a classic Spanish plaza and the original goal of creating a mural was to disguise the power station next to it. The mural was made possible by a Boston Edison grant. Under the portrait of Betances, an inscribed quote by Betances states:

(We must know how to fight for our honor / Our liberty)

Communities who create murals become "directly related to the process of its creation and its ability to transform the urban landscape by manifesting the current political moment" (Van Dahm 426). In other words, murals are symbols for communities who have come together despite hardship and have enacted concrete change to benefit their neighborhood. Referring to similar projects she had implemented in collaboration with children from New York City, Rosenberg herself stated that "Most of these children were from large families and lived in small crowded apartments. They couldn't take artwork home, so we incorporated their art into public housing projects - art that was alive, in the neighborhood, and gave kids a feeling of place (IBA 5)." To this day, The Betances Mural remains a very important part of the Villa Victoria community, full of hopeful symbolism for the neighborhood's past, present, and future way of life.