Monument to Benning's Brigade at Gettysburg

This monument was dedicated to Benning’s Brigade, part of Hood’s Division in the Army of Northern Virginia. The brigade was commanded by General Benning, who before the war was a politician and judge in the state of Georgia, and on the State Supreme Court prior to the war. The Monument stands to mark where the Brigade was located on July 2, 1863 (second day of battle) in Devils Den. 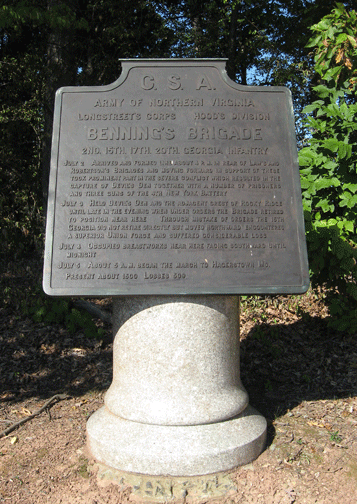 View of Devil's Den from Little Round Top 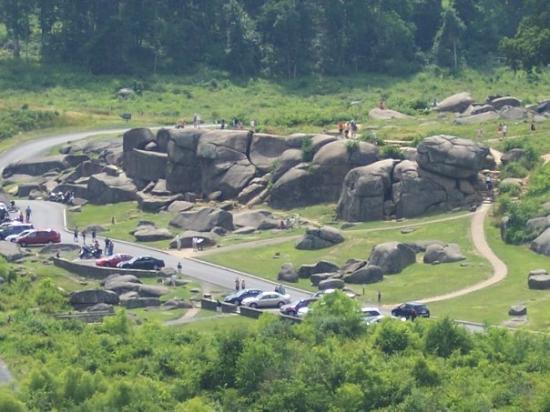 Devil’s Den was originally used by the Union artillery to counter fire the Confederate artillery that was being used to support Mclaws assault. Benning’s assault of Devil’s Den occurred around 4PM on July 2nd, and was successful in dislodging the Union artillery. The fighting in Devil’s Den was some of the fiercest and bloodiest of the second day, as the Union used some of their reserve artillery as cover of the gap between Little Round top and the Union used Scattershot in the gap to disrupt and cause devastation to the Confederate Lines that were assaulting through Devil’s Den.

Benning’s Assault continued through Devil’s Den but was soon pushed back to the rock hill of Devil’s Den by the 40th New York Volunteer Infantry Regiment. As Benning continued their assault up Little Round Top they posted sharpshooters in the rocks as cover to try and disrupt the command of the Union lines up in the hills. Benning had 1500 men present for the assault of the Devil’s Den and ended up losing around a third of his men.

The words on the monument are as follows:

July 2. Arrived and formed line about 4 P. M. in rear of Law’s and Robertson’s Brigades and moving forward in support of these took prominent part in the severe conflict which resulted in the capture of Devil’s Den together with a number of prisoners and three guns of the 4th New York Battery.

July 3. Held Devil’s Den and the adjacent crest of rocky ridge until late in the evening when under orders the Brigade retired to position near here. Through mistake of orders the 15th Georgia did not retire directly but moved northward encountered a superior Union force and suffered considerable loss.