This historic Youngstown house was constructed in 1907 by local brewery owner and businessman George Renner Jr. Renner moved to Youngstown in 1885 after purchasing a struggling local brewery for $4,800. The brewery operated successfully until 1889 when a boiler explosion caused a fire that destroyed the building. This setback caused Renner to open a new brewery that was much larger, producing 18,000 barrels of beer each year. Despite the onset of prohibition, Renner managed to stay afloat due to his extensive landholdings as well as selling bottled soft drinks. After the repeal of prohibition, the brewery was refurbished and gave a boost to the local economy, producing 100,000 barrels a year. Renner passed away in 1935, and his family sold this house in 1939. In the years that followed, the house was home to the President of Youngstown State University anbefore being converted into an apartment complex. The home of the former brewer now hold a dozen apartments. 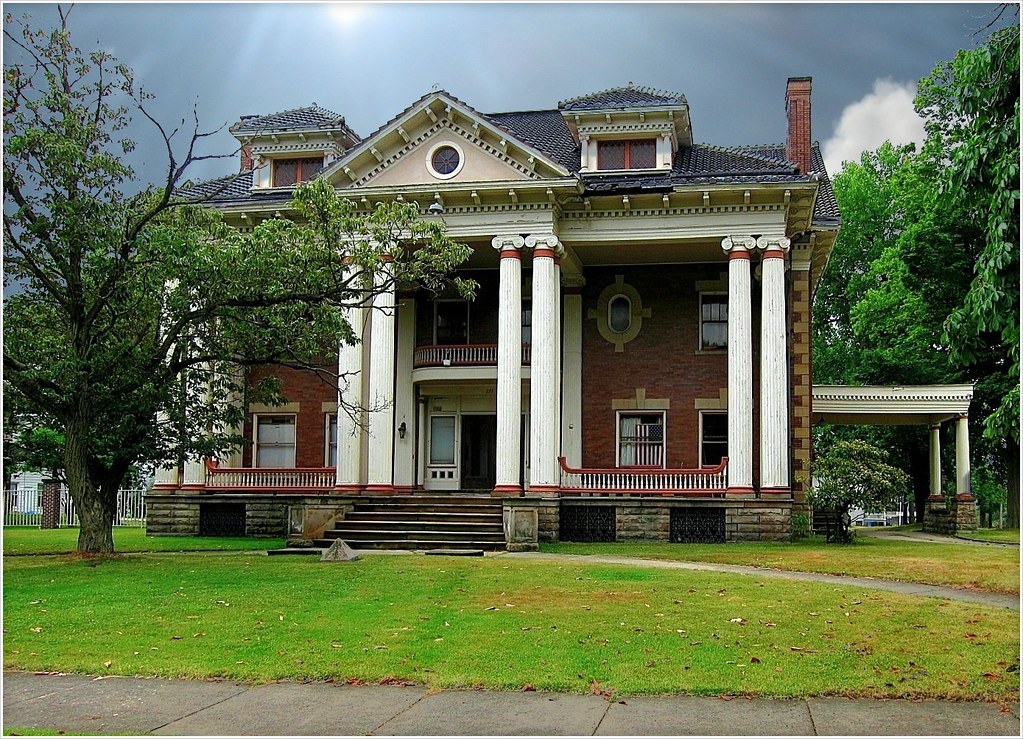 The main entrance of the George J. Renner Jr. House before renovation 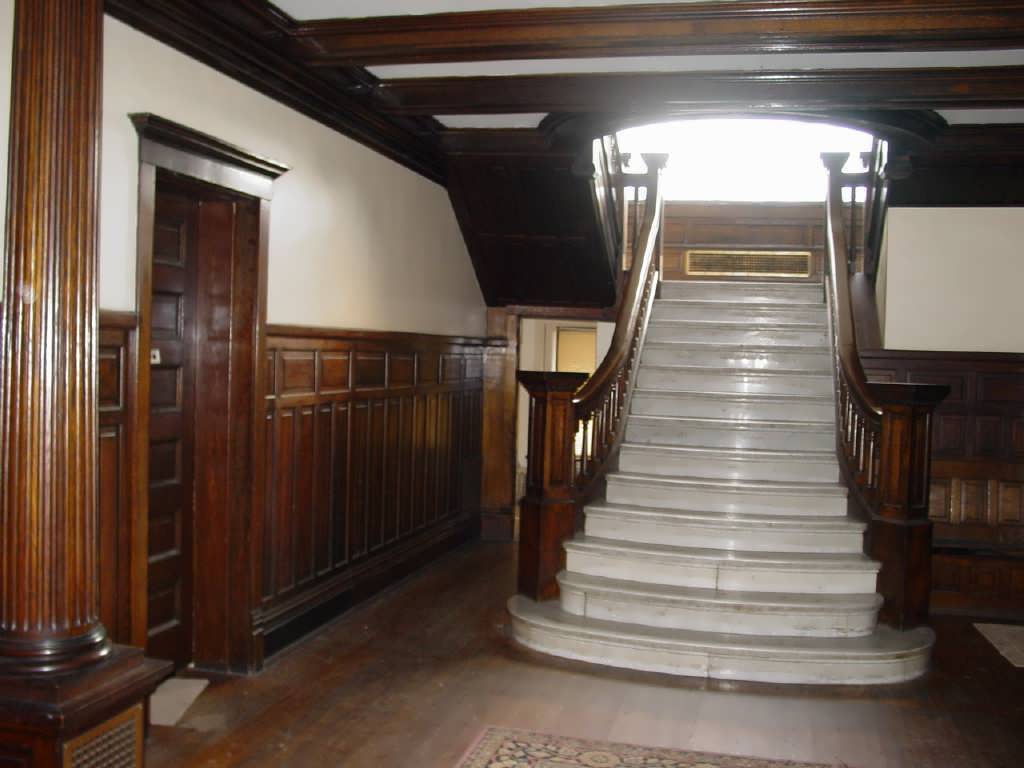 The second floor of the George J. Renner Jr. House before renovation 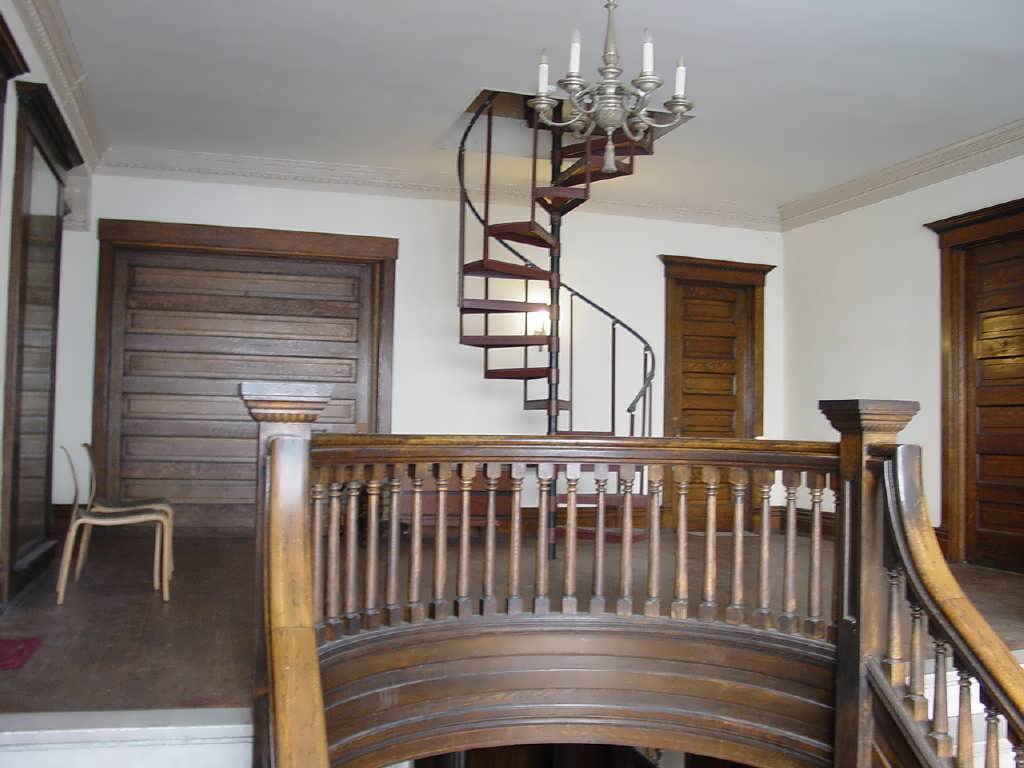 The George J Renner Jr. House was built in 1907 by George Renner Jr. It was initially estimated that the construction would cost $45,000, however by the time of its completion, the mansion had a price tag of $75,000. Architecturally the building stands out for its Georgian Revival style. The mansion is characterized by its sizeable two-story porch, which spans the entire front of the mansion, highlighted by four sets of double pillars.

Youngstown businessman George Renner Jr was responsible for the construction of the mansion. The Renner family made their fortune from the brewing industry. George Renner Sr. came to the United States from Germany in 1848. His first brewery was opened in Cincinnati, Ohio, which was a hub of German immigration and brewing at the time. George Renner Sr. then opened breweries in Akron and Mansfield, Ohio.

George Renner Jr. was educated in Covington, Kentucky; however, Renner Jr. learned the brewing industry from his father. Renner Jr’s. first breweries were in Zanesville and Wooster Ohio, where Renner Jr. flipped failing operations into profitable breweries. It was during this time that he purchased the failing Youngstown brewery for $4,800 in 1885. In 1889, after turning the plant into a profitable operation tragedy struck, a plant boiler exploded killing the head engineer George Richter, the resulting fire destroyed the rest of the brewery. It was reported that pieces of the boiler were thrown to the other side of the Mahoning River.

This setback led to the construction of Renner’s most famous brewery, which opened officially in 1890. This new brewery was considered state of the art for the time period. It continued to expand after its completion, adding a bottling facility in 1895. By 1907, the same year the Renner Mansion was built, Renner’s brewery was employing 60 people. It was the biggest brewery in Youngstown with the capacity to produce 18,000 barrels a year, which is around 6,000,000 12 ounce cans of beer a year.

The next significant challenge that Renner’s brewery faced was in 1920. With the beginning of prohibition in 1920, Renner attempted to switch the brewery’s main export from regular beer to a non-alcoholic beer, this attempt failed, and the plant had to lay mostly dormant. The brewery managed to stay afloat through the sale of bottled soft drinks and Renner’s extensive real estate holdings. With the repeal of prohibition in 1933, Renner re-opened the brewery giving a boost to Youngstown’s economy. The brewery employed 200 men in order to get the plant back into working order and refurbished many aspects of the plant, raising the annual barrel amount to 100,000.

Renner passed away in 1935, leaving an immense legacy as a significant business owner in Youngstown. The Renner family sold the mansion in 1939 since then it has held many various purposes. It was owned at one time by Youngstown State University as the President’s house; it was later purchased for 35,000 in 1984 by Daniel Reese. The mansion was divided into 12 separate apartments, which can still be rented today.