The Hungarian Freedom Memorial was created to honor the short-lived revolution against the Soviet-backed Hungarian government. The memorial is dated October 1956 in honor of the short time the revolution was fought in the months of October and November (October 23-November 10, 1956). The Memorial is located in Liberty Square, which is also the home to the British Stamp Tax Office, burned down in 1765 by protestors. 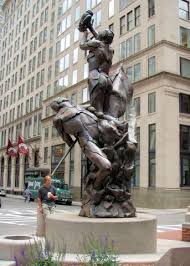 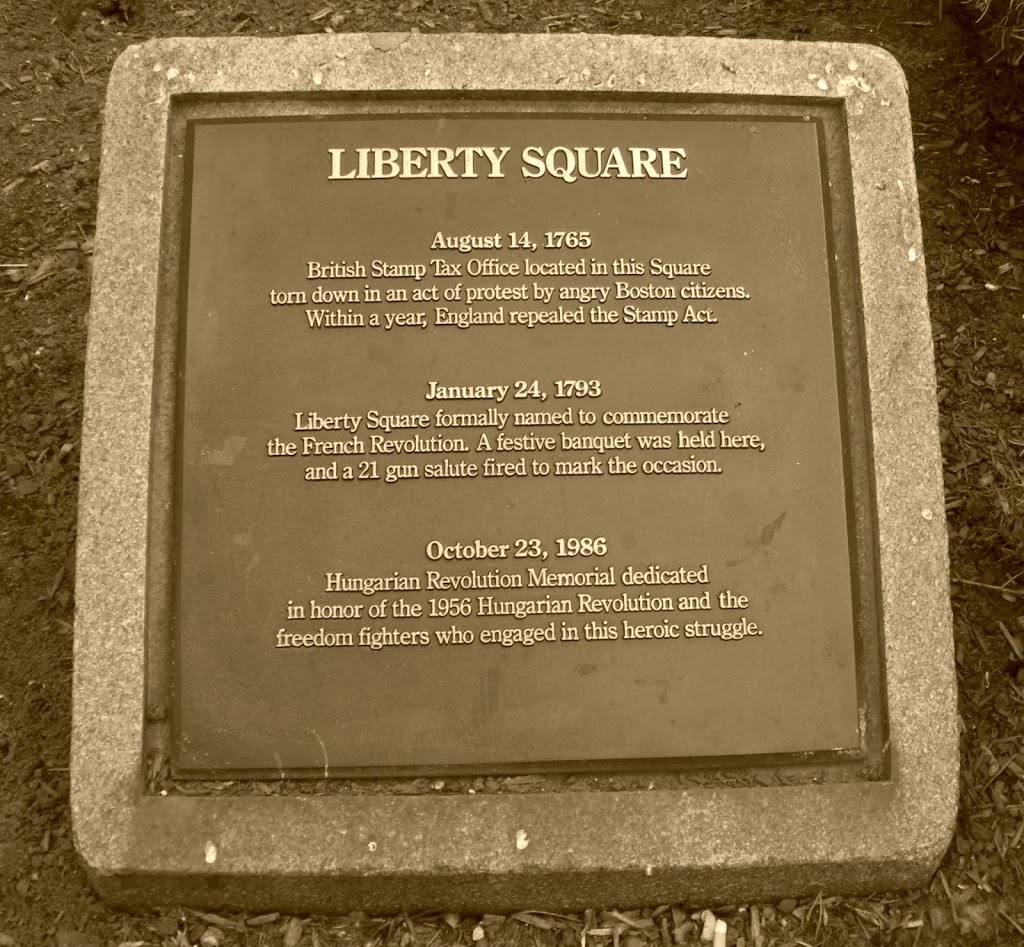 The Hungarian Revolution began on October 23, 1956 as protestors took to the streets to fight for a more democratic political system and freedom from control of the Soviet Union. This revolution was short lived because only a few weeks later, November 4 the Soviet Union returned to Hungarian soil and ended the revolt. Today the Hungarian Freedom Memorial is located in Liberty Square, Boston Massachusetts. Liberty Square Park is also the location where citizens are believed to have destroyed the British Stamp Act office in 1765. The monument created in memory of the Hungarian Revolution was commissioned by the Hungarian Society of Massachusetts on the 30th anniversary of the Revolution. Its sculptor was Gyuri Hollosy and the monument stands about 16 feet tall.

Following the end of World War II, President Roosevelt, Prime Minister Winston Churchill and Premier Joseph Stalin met to divide Germany and the rest of Eastern Europe. Roosevelt pushed for the Soviet Union to enter the Pacific War against the Japanese and for the Soviet Union to join the United Nations as a permanent member. At this meeting, which was named the Yalta Conference, Stalin agree to join the UN and after two or three months they had agreed they would support the US in the Pacific War. Stalin agreed with the understanding that the US and Britain would be "friendly" to the Soviet Regime. Churchill had asked that Eastern European countries under Soviet rule partake in free and fair elections which was also agreed to at the time. However, the Soviet Union did not follow through on promises made at the conference and instead occupied Eastern Europe.

Matyas Rakosi, a member of the Hungarian Communist Party, became Hungary's prime minister and would remain in power until Stalin's death. As an authoritarian ruler, Rakosi ordered the executions of around 2000 individuals and imprisonment of 100,000. After Stalin's death in 1953, Rakosi fell from power and was removed by the Hungarian Communist Party, although he quickly returned to power when his replacement, Imre Nagy suggested reforms that were too radical for Soviets. Stalin died in 1953 and following a brief power struggle, Nikita Khrushchev became the leader of the Soviet Union. He denounced Stalin's decisions in his "secret speech", which was later shared with different groups and subsequently became public when the U.S. State Department published the complete text. It caused shock and confusion throughout the Soviet Union and harmed Stalin's reputation, as Khrushchev intended. It was this speech that inspired Hungarians to demand liberalization of their political system. Students in Budapest were the first to take action, as they staged a protest on October 23, 1956. The protest began peacefully with the intention of presenting a petition of Hungarian grievances but ended violently when civilians and police both came into the street and police took action, firing into the crowd.

After the chaos of the short revolution, the Soviets returned Imre Nagy to power, who promised to turn the economy around and attempted to create a coalition government that had multiple representative parties. He asked that Hungary be recognized as a neutral state and removed the country from the Warsaw Pact in a step to remove the Soviet Union's control over Hungary. The Soviet Union began to cautiously remove troops but kept eyes on Hungary but remained concerned that the party would lose power. When China and Yugoslavia put pressure on the Soviets to limit dissent in Hungary, they returned to assert control. Later, Nagy would be executed by the Soviet Union in 1958 for his involvement in the Hungarian Revolution.

Following the suppression of the Revolution, Hungarians fled to the United States. They had a unique experience as refugees because they had evacuated from a two week revolution and collectively had a high education level that was either obtained before or after their arrival, making their incorporation into America’s mainstream considerably easier. The refugees were essentially seamlessly included into American society, thanks to the positive light that the media and government painted them in, as permanent residents who had no intentions of returning to the Soviet ways.

The Memorial depicts is a mound of rubble with recognizable heads in memory of the students who had been killed in protest as well as a fallen Hungarian soldier holding a flag pole flying the Hungarian Flag. Above them is a nude woman holding her baby up towards the sky. On the plaque beside the memorial is a quote by John F. Kennedy on the first anniversary of the Revolution; “October 23, 1956 is a day the will live forever in the annals of freedom and nations. It was a day of courage, conscience and triumph.No other day since history began has shown more clearly the eternal unquenchability of mans desire to be free, whatever the odds agains success, whatever the sacrifice requires.”