Today, the Rose Kennedy Greenway winds its way through downtown Boston and gives shape to its most central neighborhoods. Its manicured plazas, gardens, and art installations give character to the city and in part define the waterfront. But long-time denizens of the city know it for what it came to replace. Prior to the Greenway’s construction, an incredibly disruptive raised highway cut through downtown Boston. The John F. Fitzgerald Expressway, now long gone and reduced to rubble, once bisected the city and loomed unattractively over its oldest neighborhoods. 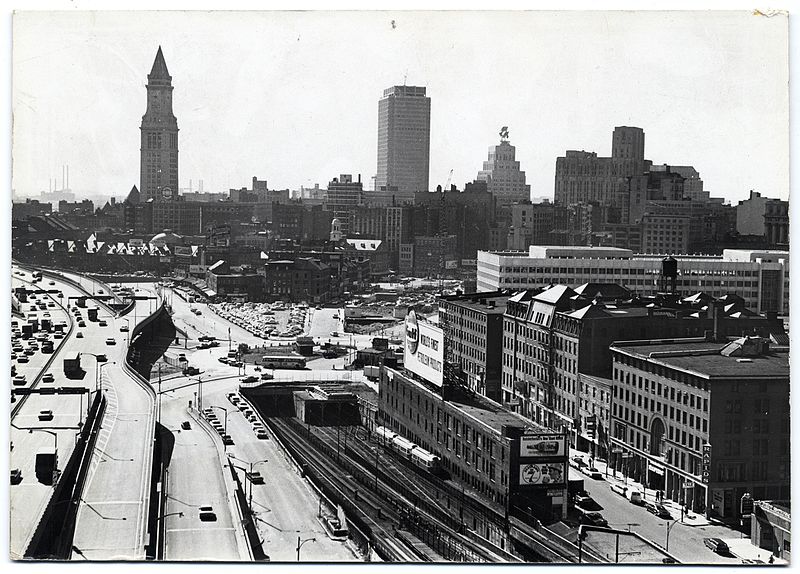 Construction During the Big Dig 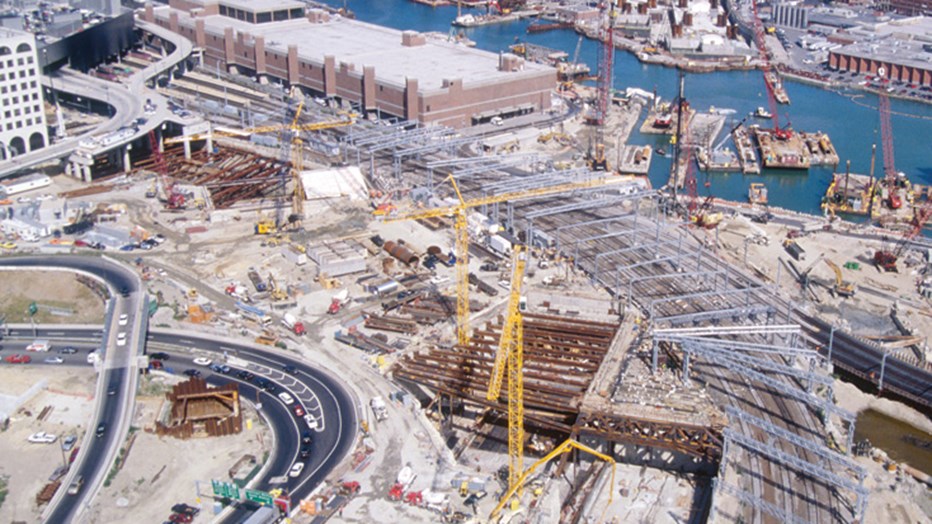 The Rose Kennedy Greenway Recently After its Opening - 2008 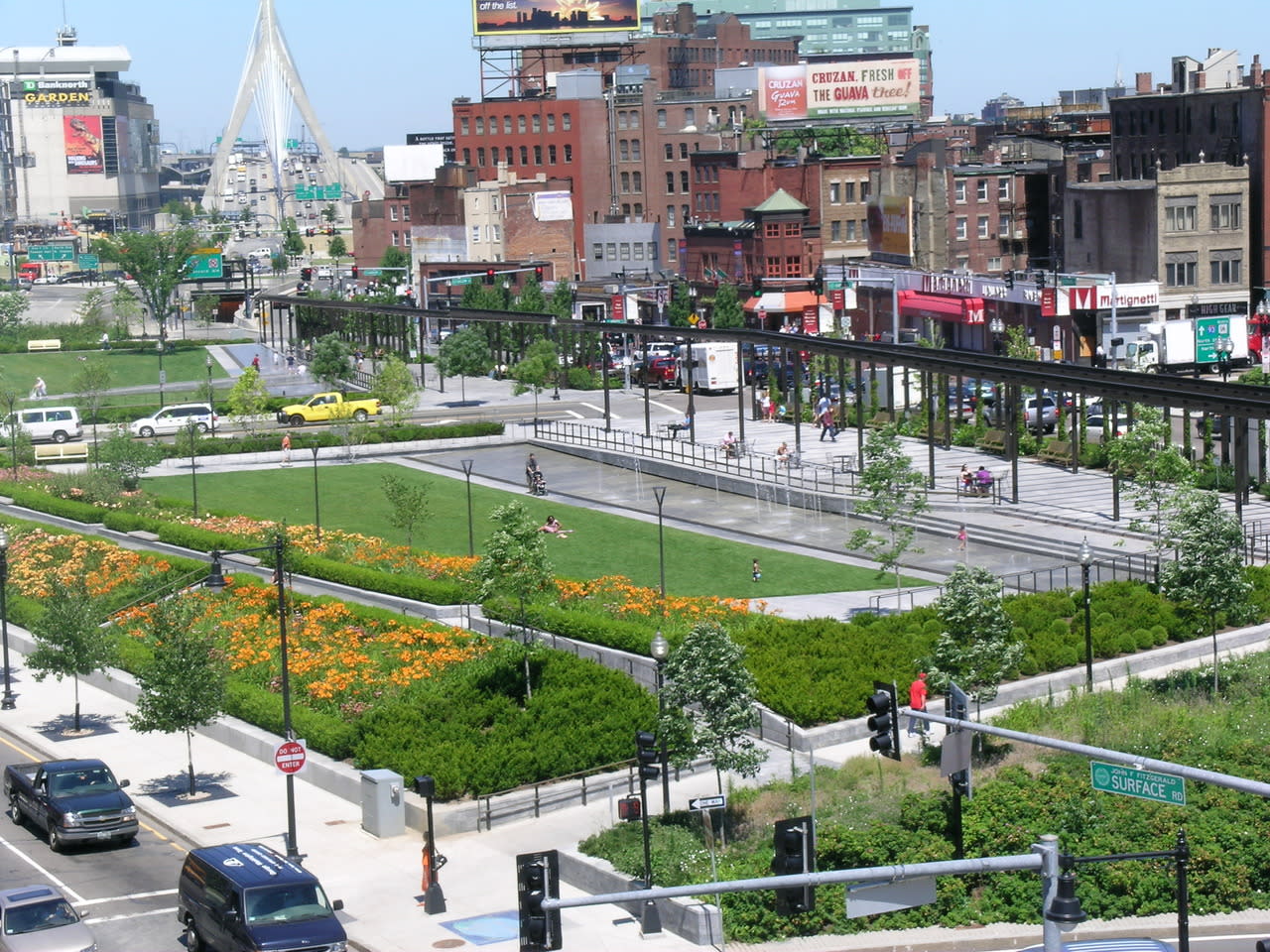 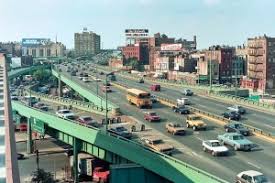 Plans for the Expressway first came about in the 1930s, though the real push began in the wake of World War II. By 1951, plans had been drafted and demolition in Boston’s historic North End commenced. Buildings from the North End south to Chinatown were condemned by the state. Part of the so-called “Master Highway Plan,” the construction of the raised expressway took eight years and cost the city nearly $450 million in bonds and financing. The end result, however, was not as well-loved as its designers might have hoped. Cheekily dubbed the “Green Monster” due to its green paint and garish hulking appearance, the highways cast a large shadow over Boston’s downtown, and cut off many of the waterfront neighborhoods from the rest of the city (1). Even worse was the fact that it didn’t solve the traffic problem. Quickly after it opened in 1959, the new raised Expressway experienced regular traffic jams. From the 1960s to the 1980s the volume of cars making use of it only grew, and the road became insufficient as well as unattractive. It would remain a thorn in the city’s side until plans plans came about in 1982 to replace it with a tunnel. This mammoth task, which locals would come to call the “Big Dig,” has been described as “the nation's most complex and costliest highway project" (2).

The Big Dig came out of necessity. Boston was a major city centuries before automotive traffic was a concern, and thus it grew organically and without thought to the infrastructure that would one day be essential to its prosperity. Thus, the city’s layout was not conducive to modern traffic, and Boston faced mounting congestion as automobiles became more and more widespread in the 20th century. This traffic problem was the reason for the construction of the original raised highway, but that soon became insufficient.

Back in 1959 the elevated John F. Fitzgerald Expressway carried around 75,000 vehicles a day, while by the early 1990s that number had risen to nearly 200,000. Congestion was a daily occurrence, and seriously hampered the economic development of the city. High crash rates, pollution from idling vehicles, and lost hours were all a factor in the desire for a higher-capacity subterranean solution. The raised highway cut off neighborhoods along the waterfront, perhaps most famously the North End, from the rest of the city.

Thus began the herculean task of construction. With an original projected cost of $2.8 billion dollars and a final cost of $14.8 billion dollars and spanning 7.9 miles of highway, was neither straightforward nor simple. The project was plagued with delays, design flaws, and cost overruns that in some cases even resulted in criminal arrest. Several highway interchanges, a new bridge, and harbor tunnel all had to be constructed while not bringing traffic flow in the city to a standstill. While the tunnel project lives on most prominently in the memories of Bostonians, it was only one of several major works that were constructed as a part of the greater Big Dig project. The 10 lane cable-stayed Leonard P. Zakim Bunker Hill Memorial bridge was erected during this period, and is one of the city’s better-loved architectural features. Though less flashy, the Ted Williams Tunnel that crosses under Boston Harbor was excavated as well, and provides an essential connection between South Boston and Logan International Airport.

The Massachusetts government compares the Central Artery/Tunnel Project to such historic projects as the English Channel Tunnel, the Trans-Alaska Pipeline, and even the Panama Canal. Much of the difficulty came from the constraints under which designers and construction workers had to labor. The fundamental challenge was building a tunnel directly below a raised highway that was wider than said highway, without first demolishing the raised tunnel. Engineers managed to shift the elevated highway onto wide horizontal struts and cut away the original supports, all while the road remained in use.

While the project’s ultimate completion was a feat of engineering, its construction was drawn out, expensive, and at times disastrous. While construction began in 1991, the Big Dig did not conclude until 2007, and went immensely over budget. Much of this delay and overrun was due serious design flaws and issues in the process, like in 2004 when the Interstate 93 tunnel sprung a leak. These project became a political quagmire. In 2000, project manager James Kerasiotes resigned after failing to disclose $1.4 Billion in overruns, after which Congress capped their federal contributions. Massachusetts Governor Michael Dukakis upon leaving office complained that “it never should have taken so long… it never should have been so expensive (3). Perhaps the biggest catastrophe that occurred in 2006, when 3-ton panels of concrete held up by insufficient adhesive collapsed and killed local motorist Milena Del Valle. The disaster resulted in a settlement of $6 million between the family and the adhesive manufacturer Power Fasteners, and cast a dark shadow on the already controversial project. Nonetheless, by 2007 the project was finished.

After 15 years of construction, with cars racing under the streets instead of creeping along above them, the space for the Rose Kennedy Greenway was finally free for development. Parks and walkways were not the original intention, however. Backers of the project had grander designs, and had hoped to raise far more money to transform the new public space. Ideas for museums and botanical gardens were floated, but after the staggering expense of the Big Dig, the funding of such things proved impossible. Still, as the Boston Globe observed in a 10th anniversary article on the project, “it didn’t really matter.”

The Greenway, a self-described “healthy green space” that today features everything from community programs, to contemporary art installations, to myriad permanent parks, is more subdued than its proponents might have liked (4). Still, it has managed to redefine the city and change its landscape. City local and State Transportation Secretary Frederick Salvucci said in 2007 that Boston “was always a beautiful city, but it had this ugly scar through it” (3). From the scar of the “Green Monster” Expressway to the open wound of the Big Dig, Boston suffered under its traffic problem for decades. The Greenway never needed to be something extravagant. Its existence today has reconnected parts of the city that had been separated by bad infrastructure for decades. While the Greenway does not draw direct attention to the history of the land on which it is situated, its existence as a vibrant public space stands as a testament to the ultimate success of the Central Artery Tunnel Project that replaced the John F. Fitzgerald Expressway. For those Bostonians who were here during the nineties and 2000s, it also serves as a physical reminder of a difficult and tumultuous time in the city’s past that will not soon be forgotten.