The Hatch Memorial Shell is a well known landmark in Boston along the Charles River and is now the site of many concerts and movies. It was originally constructed in 1928 as a wooden concert venue for the Boston Pops Orchestra. The temporary shell underwent various renovations over time and in 1941 was rebuilt as a permanent structure along the Charles River using money allocated for a public “beauty spot” in the will of Maria Hatch, who wanted a memorial for her brother, Edward Hatch. The Edward A. Hatch Memorial Shell was dedicated in June of 1940 and also lists the names of many famous composers, thus memorializing them as well. 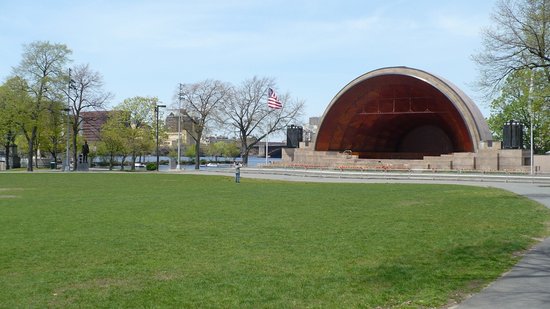 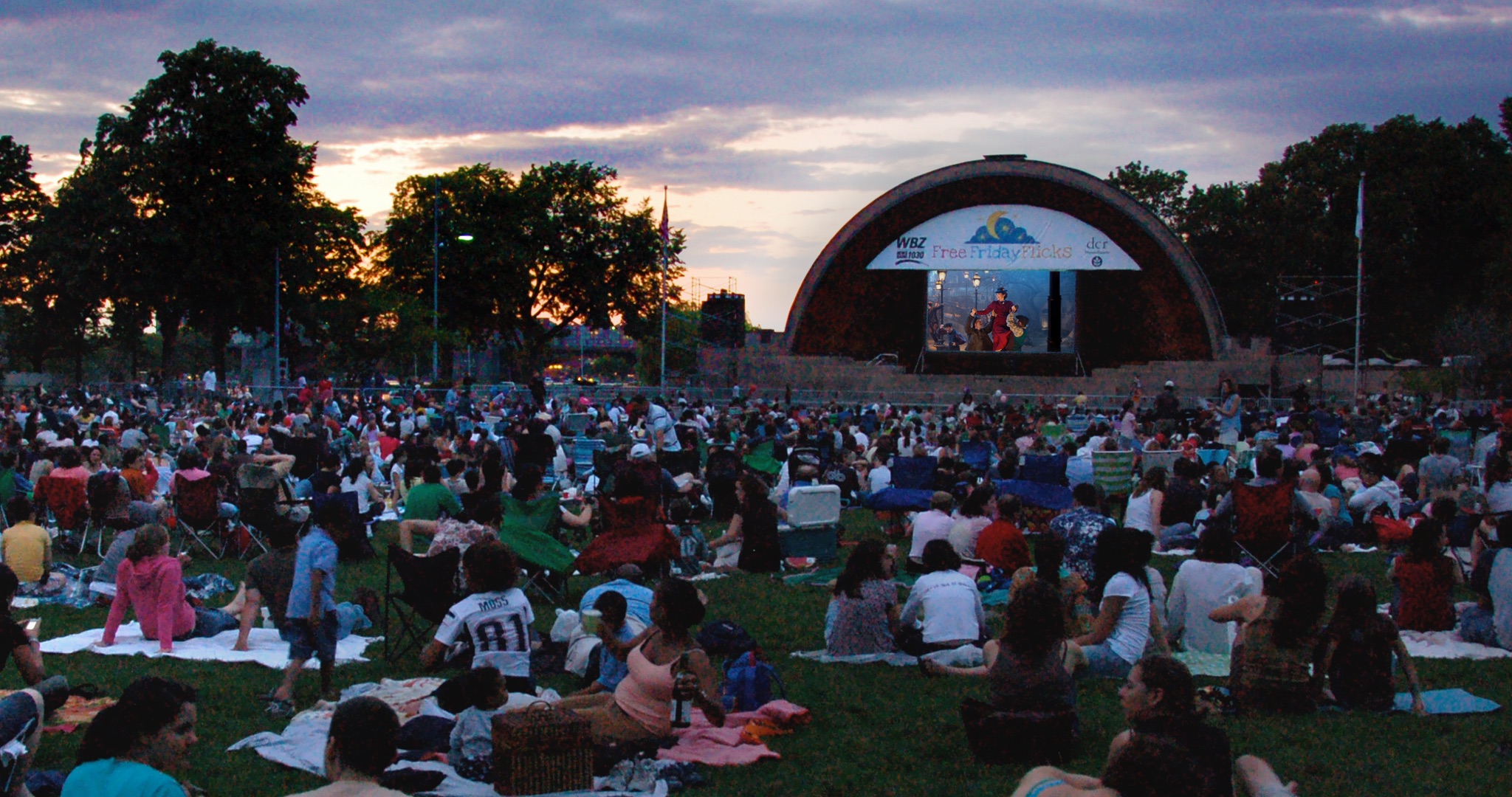 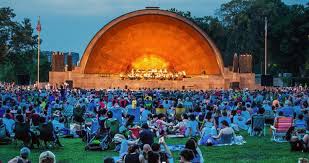 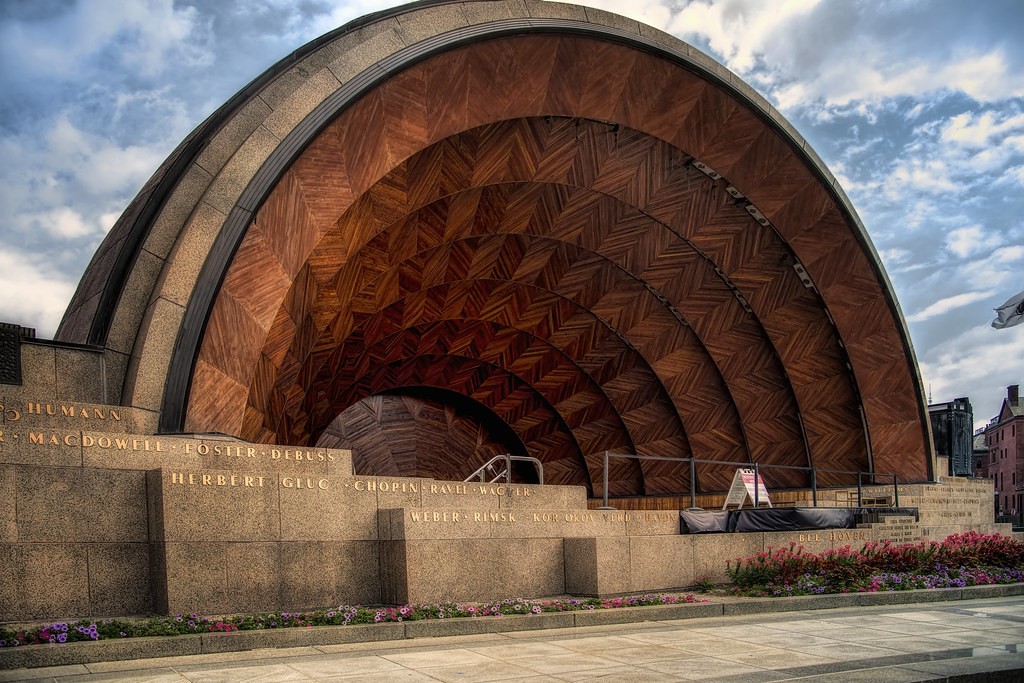 Originally built in 1928 as a temporary concert venue for the Boston Pops Orchestra, the Hatch Memorial Shell is a well known landmark along the Charles River in Boston, Massachusetts. The wooden shell was replaced by a second metal temporary shell in 1934, which was destroyed in 1938 when a hurricane blew out the back of it. Arthur Fiedler, conductor of the Pops, wanted to conduct a series of free concerts but despite appreciation and support from the community, funds to create a more permanent structure were limited because of the Great Depression. In 1936, Maria Hatch’s will was discovered by Massachusetts Attorney General Paul A. Dever, and it allocated funds for a public memorial. This money was used to create the permanent Hatch Shell, which was dedicated to Hatch’s brother Edward in 1940 and constructed in 1941.

Richard J. Shaw, a Boston architect specializing in churches, was chosen to design the permanent structure of beauty. Shaw built the exterior out of rustic terrazzo, a composite made of various stones and other materials, and the interior was built of teak wood. The 72-foot stage was made out of a granite base and contains bronze names of famous composers. Shaw designed the backstage dressing room areas with stainless steel and frosted glass. Over time, this shell has overgone many renovations. During its 50th anniversary in 1991, the acoustics of the structure were modernized, and, in 2018, the exterior tiles were replaced in order to prevent weather damage.

The structure is named in honor of Edward Hatch, a descendant of a deeply rooted colonial family. Edward’s sister Maria decided to memorialize her late brother after her own death, with a will detailing the specifics of the memorial. The memorial had to:

be in or near Boston and was to be “a park, playground or memorial to be open to the public at such times and under such circumstances as may from time to time best minister to the public need for a beauty spot.” (Bartlett)

The original trustee of the will died before the will could be executed and the will itself remained undiscovered from Maria Hatch’s death in 1926 to 1936. The will was eventually discovered by Paul Dever, who then appointed new trustees Edward J. Hickey and John Burke. The new trustees decided a permanent concert shell on the Charles River Esplanade would be the most suitable and useful application of the terms of the trust, so the Edward A. Hatch Memorial Shell, originally dedicated as the Edward Hatch Memorial Concertorium, was dedicated to Edward Hatch on July 2, 1940.

During the construction of the shell, the decision was made to chisel the names of famous musical composers onto its base. The Hatch Shell’s architect, Richard Shaw, asked the trustees of the will, Hickey and Burke, to choose the names to ensure no critical controversy on his point, and the trustees turned to Arthur Fiedler and Serge Koussevitzky for help. Fiedler was the first permanent conductor of the Boston Pops, the orchestra in which the Hatch Shell was originally built as a venue for, and Koussevitzky was the conductor of the Boston Symphony Orchestra, so their musical experience and expertise was useful regarding the decision of how to choose which composers’ names would be on the shell. Eventually it was agreed to have a ballot over which names would appear, and in March 1940, seventy concert patrons, musicians, and music writers from New England voted to decide which fifty composers most deserved to be placed on the memorial. What resulted was a ballot containing ninety-seven names, none of them being living at the time to avoid controversy concerning that aspect, all with various ranging time frames and genres of music. The various categories on the ballot were: Pre-Classical, Classical, Romantic, Modern, Operatic, American and Popular. Across the shell’s various renovations, the carvings of the names in the base of the structure has been replaced by custom made bronze lettering, which may go missing due to vandalism or wear and tear damage and must be continually replaced by the Massachusetts Department of Conservation and Recreation (DCR).

Currently, the Hatch Shell is used for various concerts, movies, and other events held in the city of Boston. The Boston Pops Orchestra, the original intended user of the shell, still holds concerts there, most notably their Boston Pops Firework Spectacular held annually on the Fourth of July that often features notable artists and bands in accompaniment with the orchestra. The pavilion in front of the shell itself is often used as an urban green space, and is frequently the site of many picnics or casual sports games.