The Boylston MBTA stop is a light rail station on the Boston MBTA’s Green Line, located on the southeast corner of the Boston Common at the intersection of Boylston Street and Tremont Street. Along with Park Street, it comprised the Tremont Street Line—the first subway line in North America. It began operation on the first of September, 1897, and has served the city of Boston ever since. The station has two platforms—one going inbound and one going outbound—that are accessed through aboveground headhouses. Transfer between the two platforms is not possible, and the station is not handicap accessible. Two old streetcars are usually on display on an outer track next to the inbound platform.

A train entering the inbound station around the sharp turn 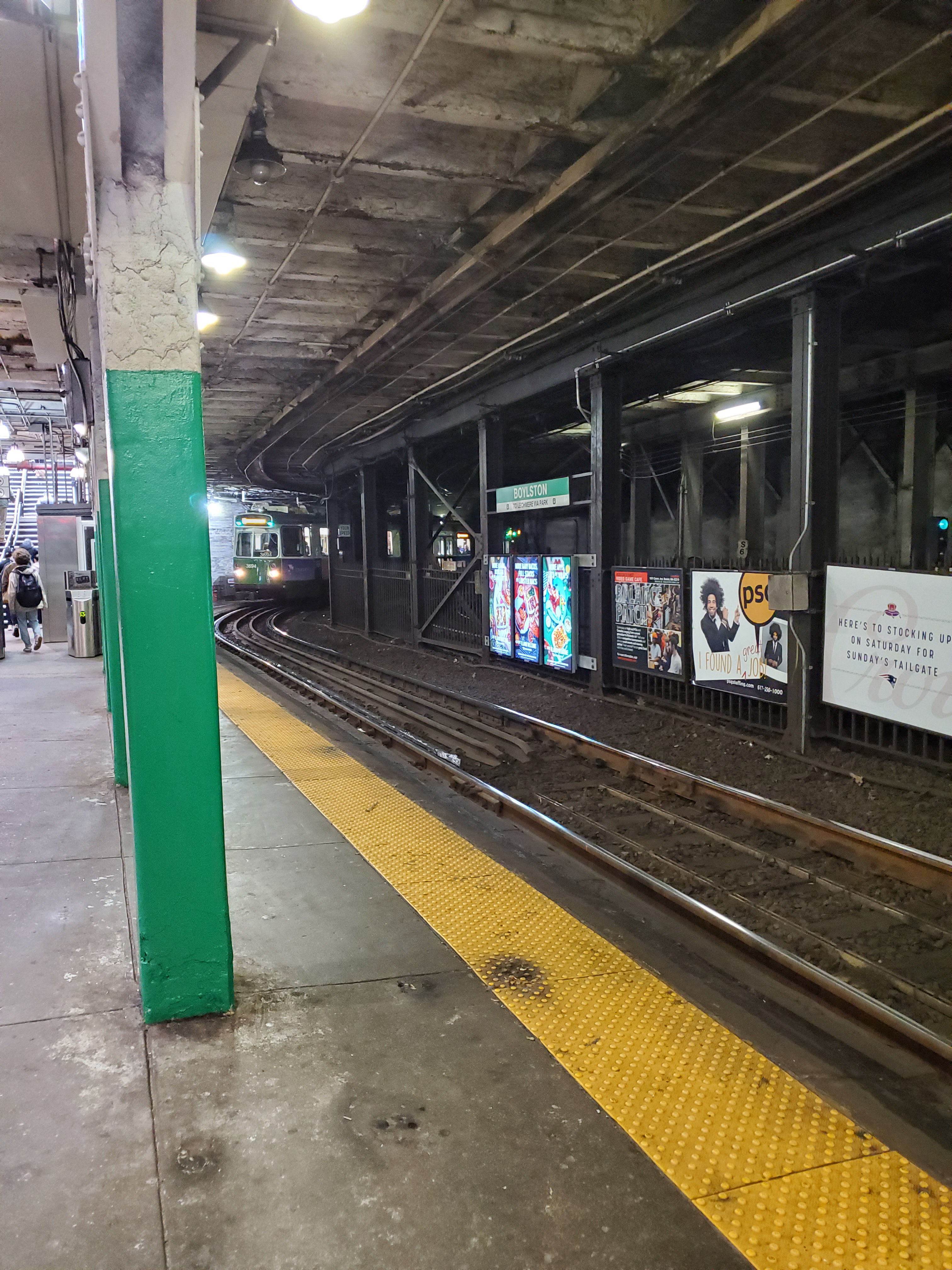 Plan of Station Corner at Tremont and Boylston Streets 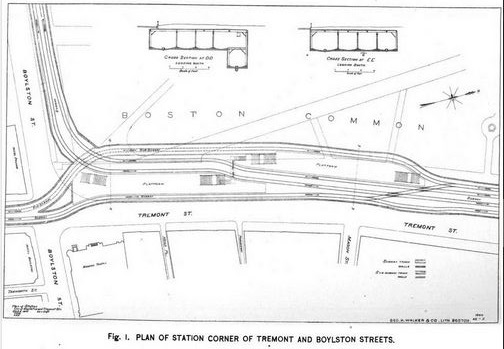 PCC #3295 on display at the Boylston Street Stop 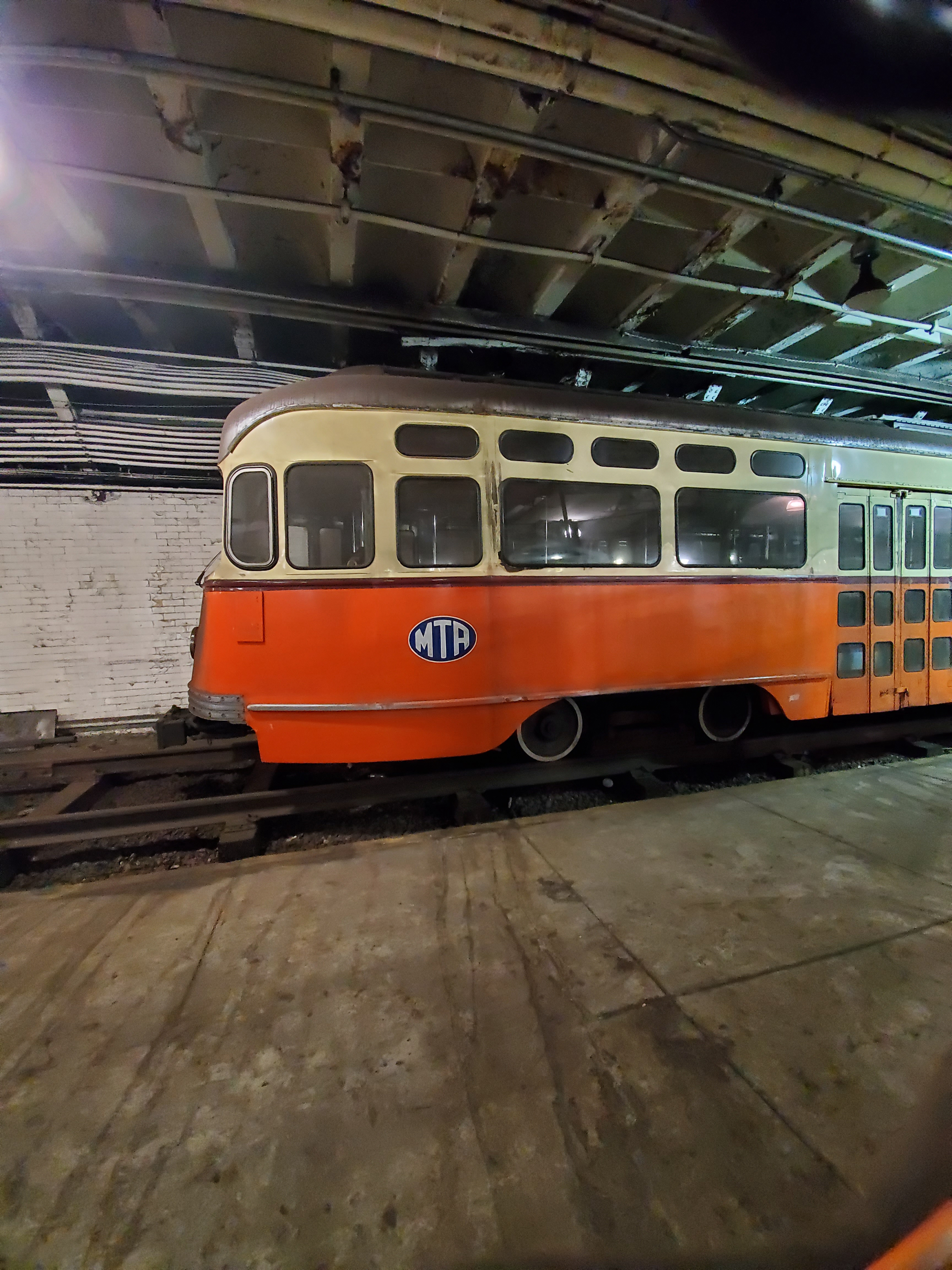 Type 5 #5734 on display at the Boylston Street Stop 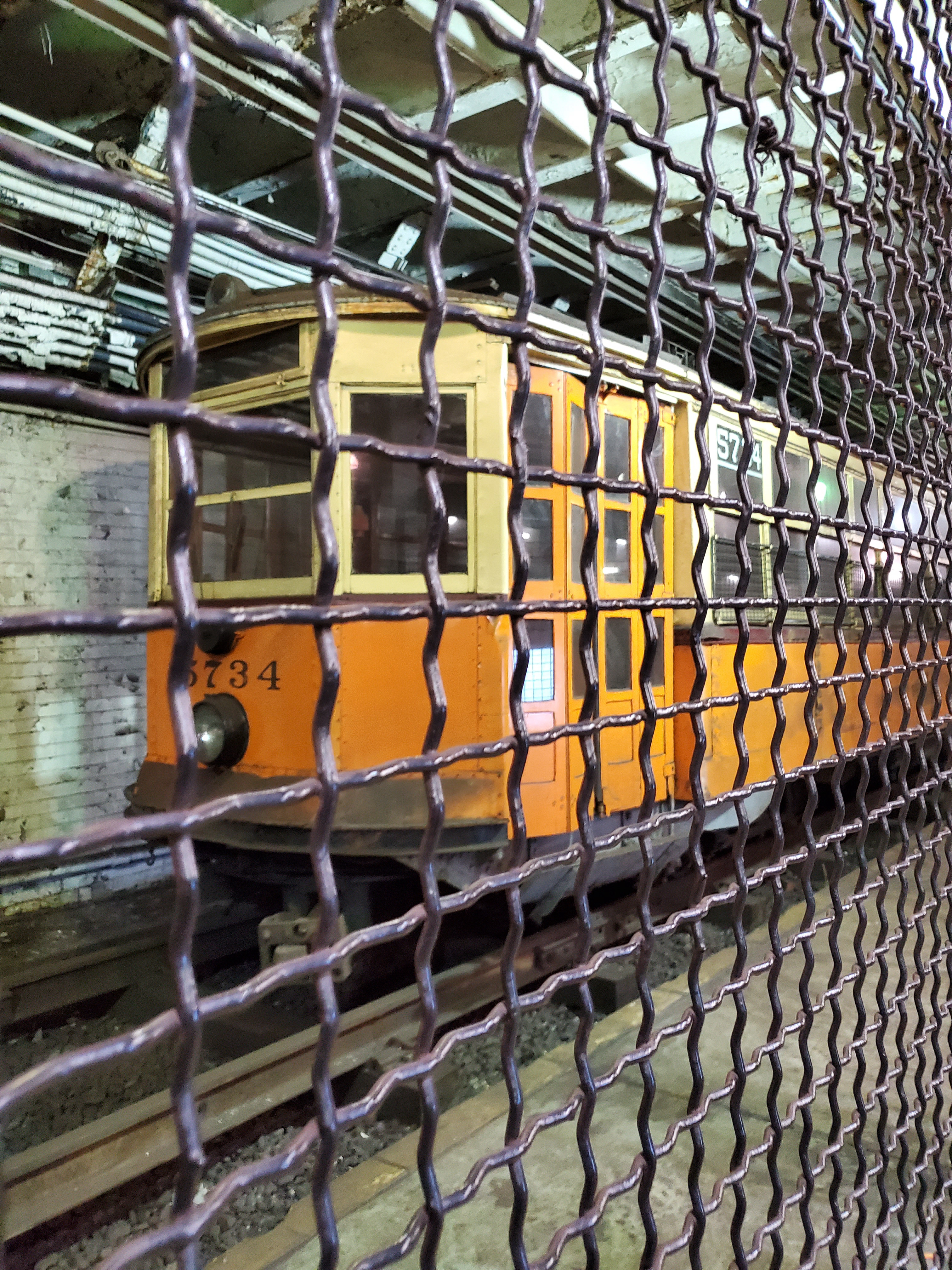 Looking inbound from the inbound tracks; the outbound tracks are visible 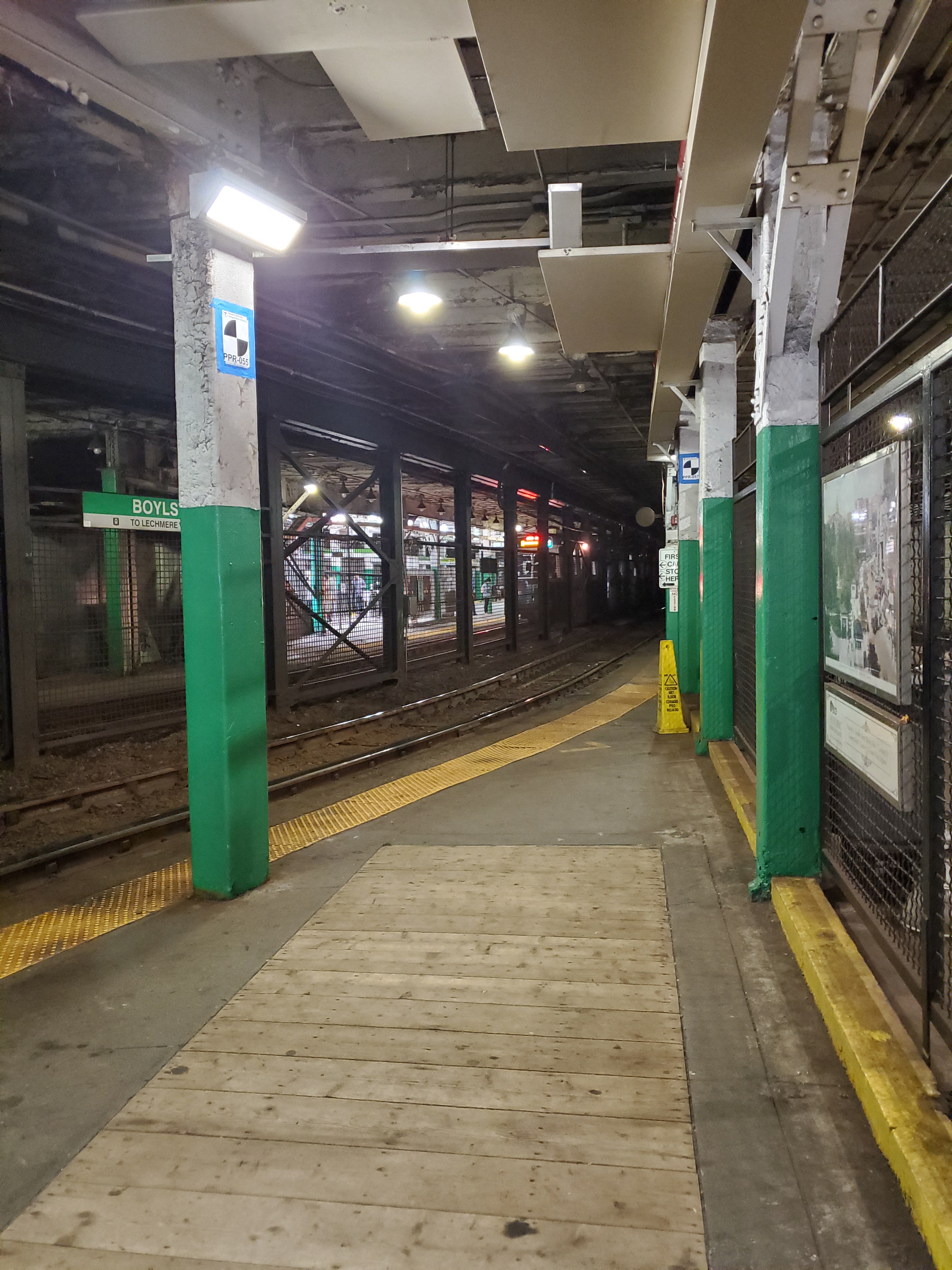 Looking up the stairs exiting the inbound station 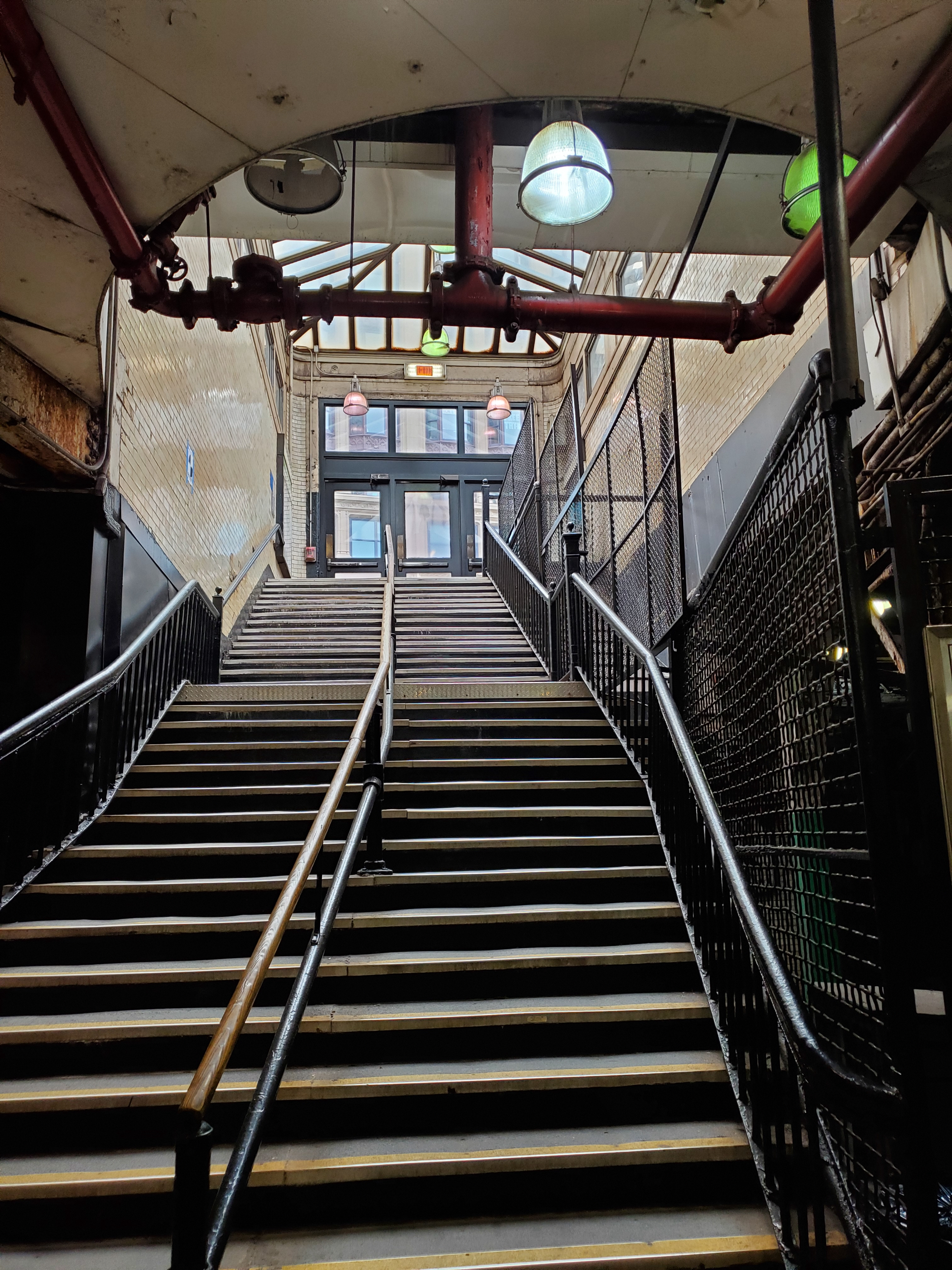 The Boylston Street stop, along with the Park Street stop, opened as part of the Tremont Street Line in 1897. The Tremont Street Line was the first subway in North America, and was built using a method modelled on those in Europe. Its development was largely incentivized by public complaint over the severe congestion downtown. In fact, a common joke at the time was that it would be faster for passengers to just climb out of the street trolley and walk over parked cars to their destination. In June 1891 the Boston Transit Commission was created to investigate the issue and create a solution (Sanborn).

The Commission came to the conclusion that a subway would be best. Its 1895 report cites a number of reasons, including the lack of property destruction required to construct, its convenience and lack of noise, and the increased safety relative to an aboveground trolley (no overhead wires, and none of the pedestrian danger that comes with crossing the tracks of a streetcar). It also notes that a subway would be more efficient and cheaper (First Annual Report).

Construction on the subway system began on March 28, 1895, in a ceremony attended by the governor, the chairman of the transit commission, and numerous city officials (“Boston’s Subway Finished”). The project, which cost $5 million, ran into a number of problems along the way, the first of which was the public outcry. A petition against the subway amassed the signatures of 12,000 businessmen, and an anti-subway league was formed.  There were concerns over the air quality underground and the fact that the subway would be underground at all, as the underground was a place associated with death and burial (Brooks).

These concerns were a theme throughout the project, as the path of the Tremont Street Subway passed through a burial ground, and human remains were in fact discovered by college students poking around the construction. Workers exacerbated the problem by piling the remains carelessly on a retaining wall in the public eye, and in the evening the day they were found, vandals entered an unguarded open tomb, removed bones, and paraded around the Common with them. The remains in question (which amounted to about 90 bodies found in seven tombs and a further 820 found scattered in the ground) were given to Lewis Jones & Son, an undertaker who reburied the bones in the Central Street Burying Ground and labelled them with a plaque reading “Here were interred the remains of persons found under the Boylston Street Mall during the digging of the subway, 1895” (Brooks).

Another major issue encountered in the course of construction was an explosion at the corner of Boylston and Tremont. On March 4, 1897, at 11:46 AM, a gas leak into the space between the top of the subway and a temporary bridge carrying surface traffic caused an explosion when it met with sparks from a passing horse drawn trolley. Six were killed at the time of the explosion, and a further four died later. Sixty were seriously injured. The station itself was spared any serious damage and damage to nearby buildings was largely restricted to broken glass (Third Annual Report).

Construction continued as usual after the explosion and the subway opened for the first time on September 1, 1897, when 100 people boarded the first train out of Park Street. More than 100,000 people took the trip between Park Street and Boylston that day (“Nation’s First Subway”).

Throughout the 122 years the station has operated, its appearance has not changed much. Unlike Park Street, Boylston looks largely the same as it did when it was constructed and in fact still allows access to a network of tunnels (no longer in use) connecting to the South End (“Boylston Station”). The trolley cars that are usually on display on the outer track of the inbound platform are PCC #3295 and a Type 5 #5734 semi-convertible trolley. The PCC trolley is one of the last of its kind built by the Pullman-Standard Company in the 1950s and is one of the 50 purchased by the MTA (the precursor to the current MBTA). It was restored to original condition in the 1980s by the Friends of 3295, an MBTA volunteer group, to commemorate the 25th anniversary of the opening of the Riverside Line.  The Type 5 semi-convertible was built specifically for the Boston subway system by the Brill Car Company in 1924 and was donated by the Seashore Trolley Museum in Maine. The last Type 5 car was in service until 1959 and at the end of its run had operated in all parts of Boston and its suburbs (Annear).

While Boylston and Park Street are the oldest stations in North America, Boylston is well known for a far more frustrating reason: the notorious Boylston screech, measured at one point as being 111.3 decibels. The curve going into Boylston inbound as the subway turns from Boylston Street onto Tremont Street is one of the sharpest turns in North America—it makes nearly a ninety degree angle as it turns from Boylston Street onto Tremont Street. The tighter the radius of the turn, the worse the squealing. When the train goes around the corner, the wheel is inclined to go straight, but the rail forces it to turn, and this disagreement causes a slipping motion that starts the wheel vibrating, which creates the infamous high-pitched squeal (Lubbock).