The Mackinac Bridge, nicknamed the "Mighty Mac", is the fifth-longest suspension bridge in the world. Located in northern Michigan, the bridge connects the state's upper and lower peninsulas. It hangs at a total length of 8,614 feet suspended. The bridge has become a popular tourist sight around the United States because of its unique and record-breaking structure.

The Mighty Mac during sundown 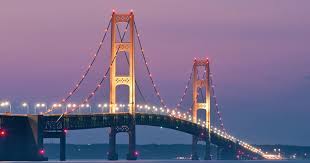 View of the bridge from the shore 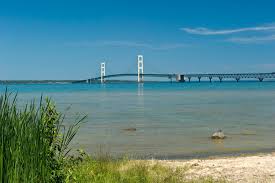 A busy day on the Mackinac 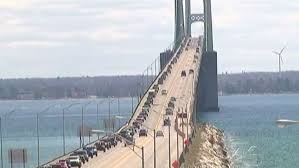 The Mackinac during construction in 1955 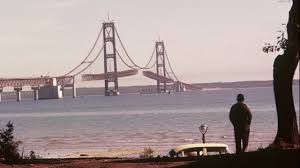 The upper and lower peninsulas of Michigan being separated by the Straits of Mackinac caused a huge transportation problem in the 1920s through the mid-1950s. The State Highway Department developed a ferry boat system in 1923, but in the coming years, the demand for transportation between the peninsulas was too high for the ferries to keep up with. With that, the idea of building a bridge was brought to life. After many decades of trying to get the bridge under construction, it finally started on May 7, 1954. The plan was for the bridge to mimic the Golden Gate Bridge and to have a better design than the Tacoma Narrows Bridge. The total price of the Mackinac was $96,400,033.33 and took a little over three years to build with over 3,500 workers.

On November 1, 1957, the Mighty Mac was opened for public use. The cities Mackinaw and St. Ignace were finally connected. At this time, it was the third-largest suspension bridge in the world, but now it is the fifth. It extends for five miles across the Straits, making it 26,372 feet long. It towers 554 feet above the waters surface and 210 feet below. The Mackinac is a four-lane highway of Interstate 75. It has been observed that over twelve thousand cars pass over the bridge daily. In order to cross over the bridge, there is a mandatory $4 toll. In the past, the toll has been as high as $7. They bring in about $20 million dollars a year. Paying this is required because all of the maintenance for the bridge is completely covered by the tolls and fees.

Michigan has been brought a lot of attraction from the Mackinac Bridge. Every year on Labor Day, up to 80,000 people participate in the Mackinac Bridge Walk. Two lanes of traffic are closed for the participants to walk the five-mile bridge led by the state's governor. The walk normally lasts about two hours and there is no registration fee to participate. This tradition has been held since 1958- only one year after the bridge was opened. The Mackinac Bridge is considered Michigan's most recognized historical marker, coming right after the Great Lakes.