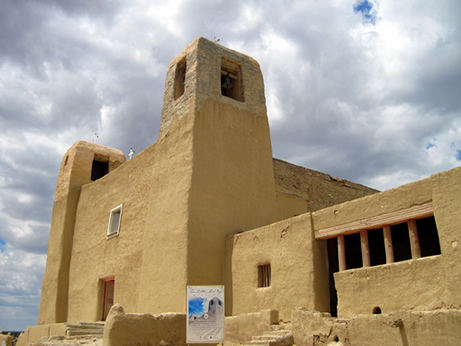 Priest Being Put to Death in Pueblo Rebellion 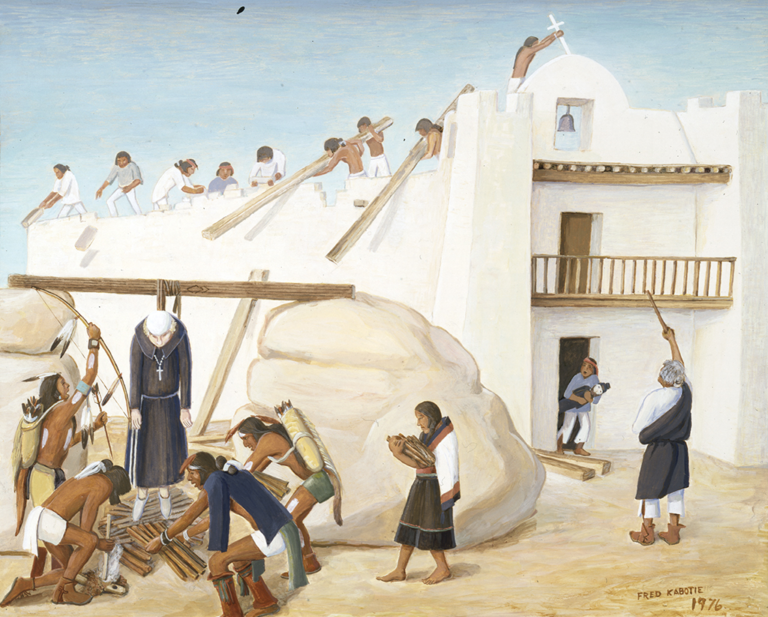 San Estevan del Rey Mission Church is located in what is said to be the oldest continuously inhabited city in the United States. The San Estevan Del Rey Mission Church was the first mission built in New Mexico, and because of this, future missions were modeled after it. The church's construction in 1629 is said to be for the purpose of converting Pueblo Indians to Catholicism to make way for Spanish colonization. The Spanish taught those living in Acoma Pueblo farming, and they banned blasphemous behavior, thus giving them control over the city.

Many natives to Acoma Pueblo did not want the change the Spanish were bringing on. Many Pueblo Indians were living under syncretism, meaning they changed their way of living only as much as they had to to stay alive. Thus, they remained true to their customs, but they incorporated what was required of them. The Spaniards burned ceremonial pits along with many other items that the Pueblo Indians found sacred and tried many of the Pueblo Indians in court, giving them harsh punishments. This led to what is known now as the Pueblo Rebellion of 1680. Popé led a rebellion that spread to other cities who fought with him, and because of this, the Spanish fled to El Paso. The Rebellion left 400 people dead, and the Pueblo Indians remained independent from Spanish rule for 12 years following the rebellion. Although the Pueblo Indians desired to rid of any evidence of Catholicism, the church remained untouched after the rebellion. This is likely due to the fact that the church was built by natives, and the workers had to carry their materials up the mountain to the city, making the construction a terribly difficult task. The natives believe this church to be special to them, and they do what they can to ensure it stays standing. The Spanish regained control of Acoma Pueblo by 1692, and San Estevan del Rey Mission Church was then reestablished by 1699.

The San Estevan del Rey Mission Church still remains standing today, and it still serves the Catholics living in Acoma Pueblo. Today, visitation is allowed to the church, however, the tours must be guided by the Acoma Tribal Council and Tribal Administration. Visitors are asked specifically not to take pictures of the inside of the church or the cemetery without a permit. The church has gone through recent restoration by WMF for what they say were emergency repairs, and the church is important to restore due to the fact that it was the only mission church to survive the Pueblo Rebellion. The tribe Gaugashti also helps with the preservation of the mission church. With the attention that is given to the church, there is no doubt that it will remain standing for much longer.