The Attack of Marye's Heights during the Battle of Fredericksburg December 13, 1862

On December 13, 1862, the Union Army of the Potomac commanded by Ambrose E. Burnside fought General Robert E. Lee and his Confederate Army of Northern Virginia to a bloody defeat in one of the most lopsided battles of the Civil War at Fredericksburg, Virginia. A series of Union assaults against the Confederate-occupied hills and fields below Marye’s Heights, arguably the most well-known series of action during the Battle of Fredericksburg, failed to drive the well-entrenched rebels from their formidable positions. A series of Union blunders, including the failure of pontoon bridges to arrive in time to cross the Rappahannock River before the Confederate arrival to Fredericksburg, a weak command culture, misunderstood orders, and miscalculation led to fourteen increasingly futile and meaningless charges. By the end of the day, thousands of Union soldiers would lie dead and wounded on the fields in front of Marye’s Heights, whilst the survivors of the Army of the Potomac entered one of its most demoralized phases of the entire war. 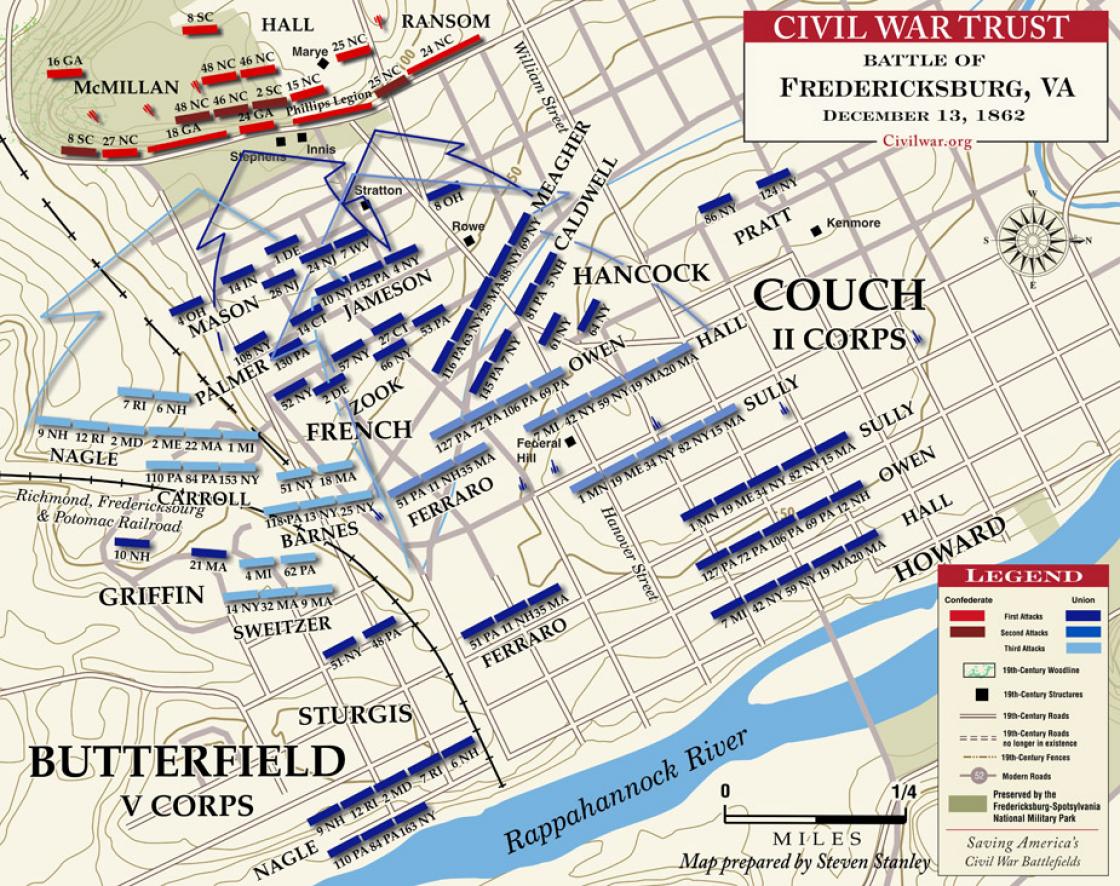 General Ambrose E. Burnside commander of the Union Army of the Potomac 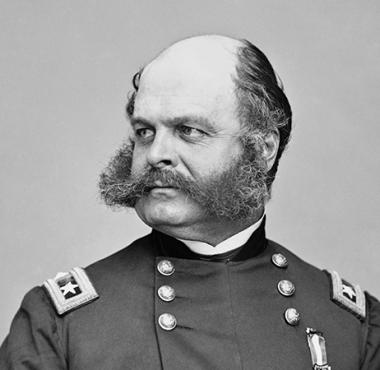 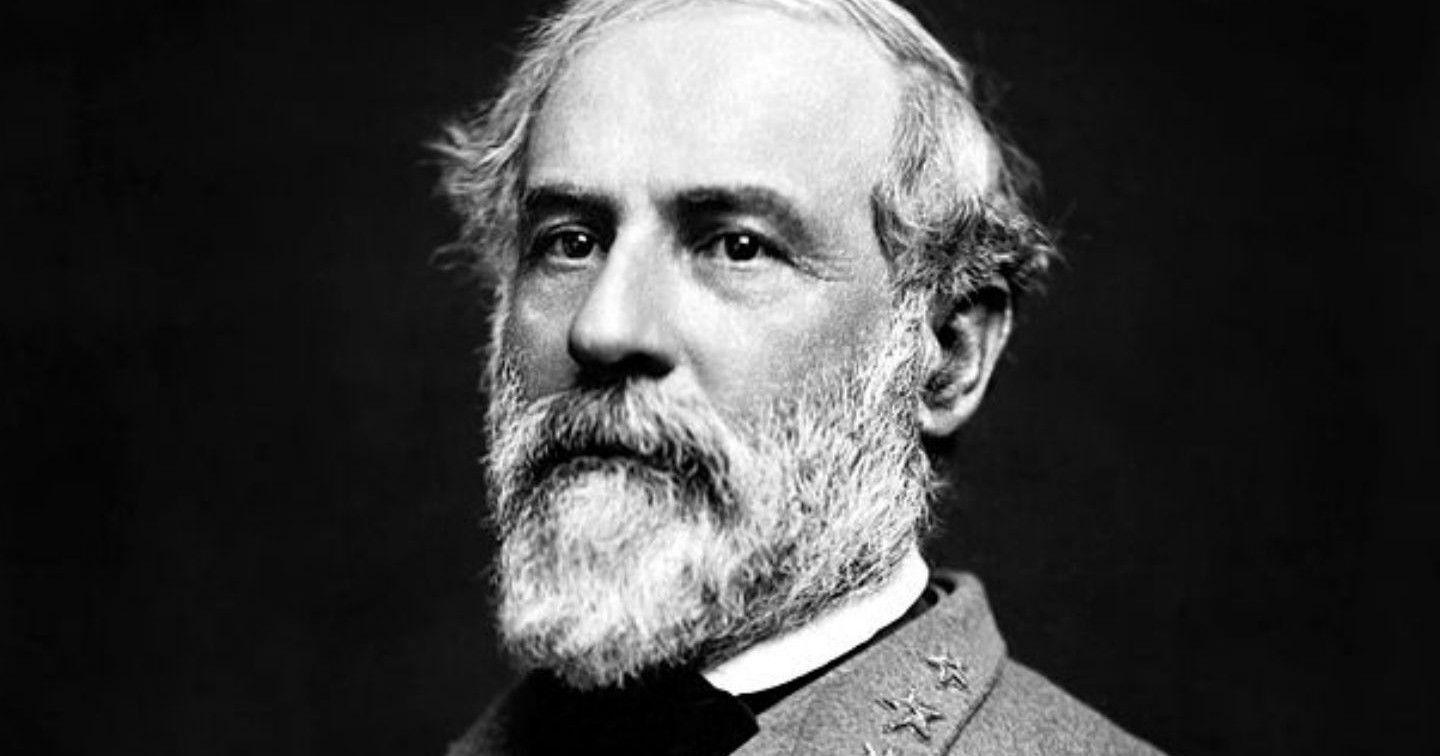 A painting of Union assaults up Marye's Heights 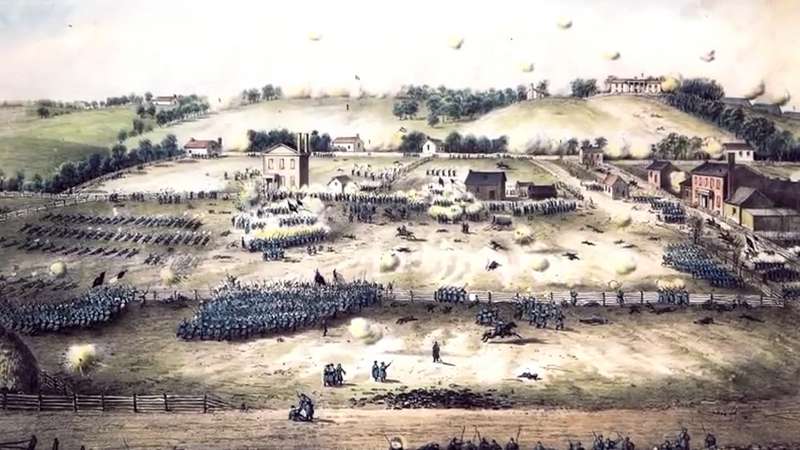 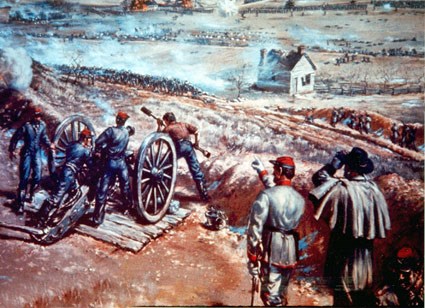 The Irish attack Marye's Heights as painted by Don Troiani 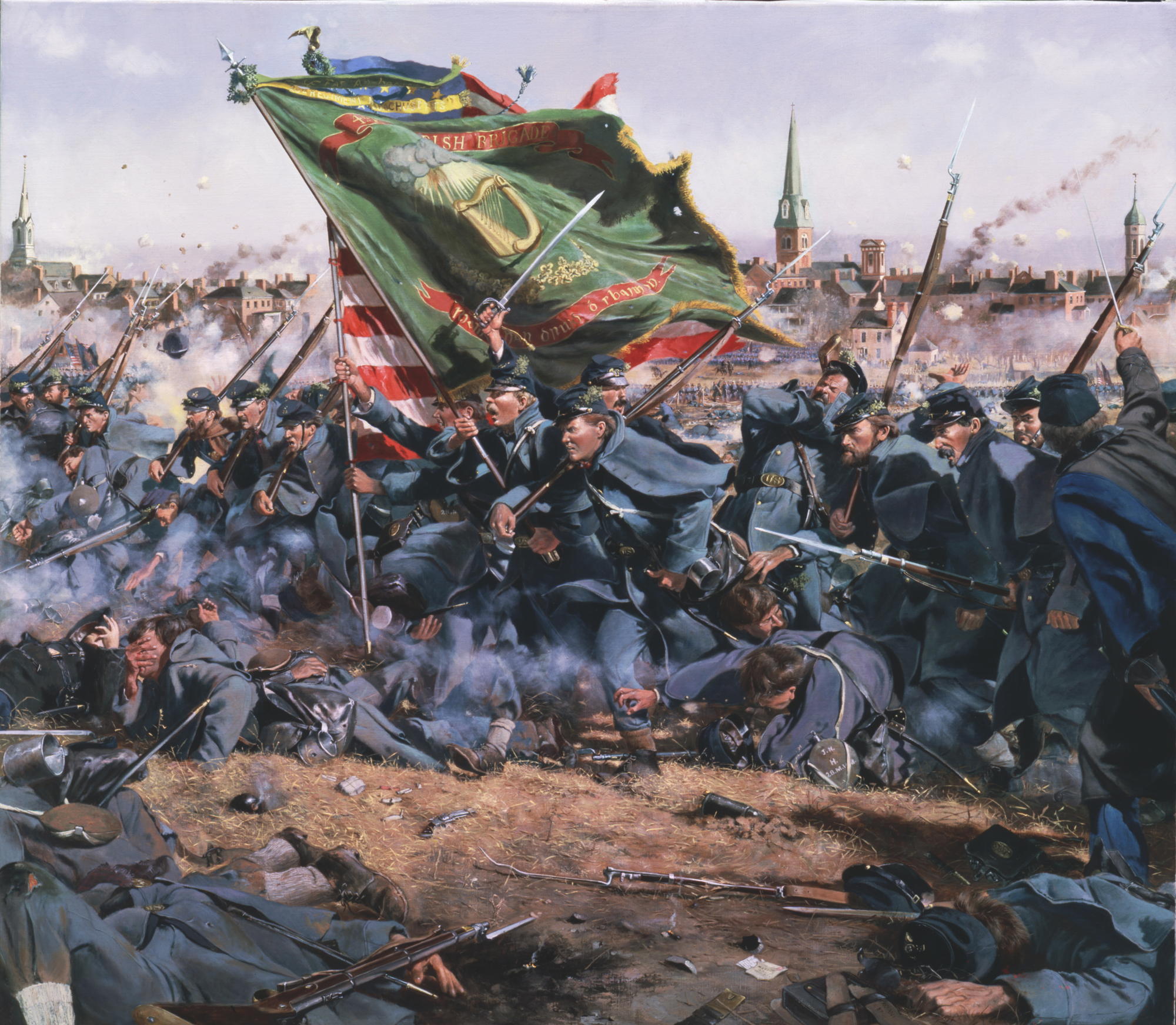 Confederate dead behind the Stone wall 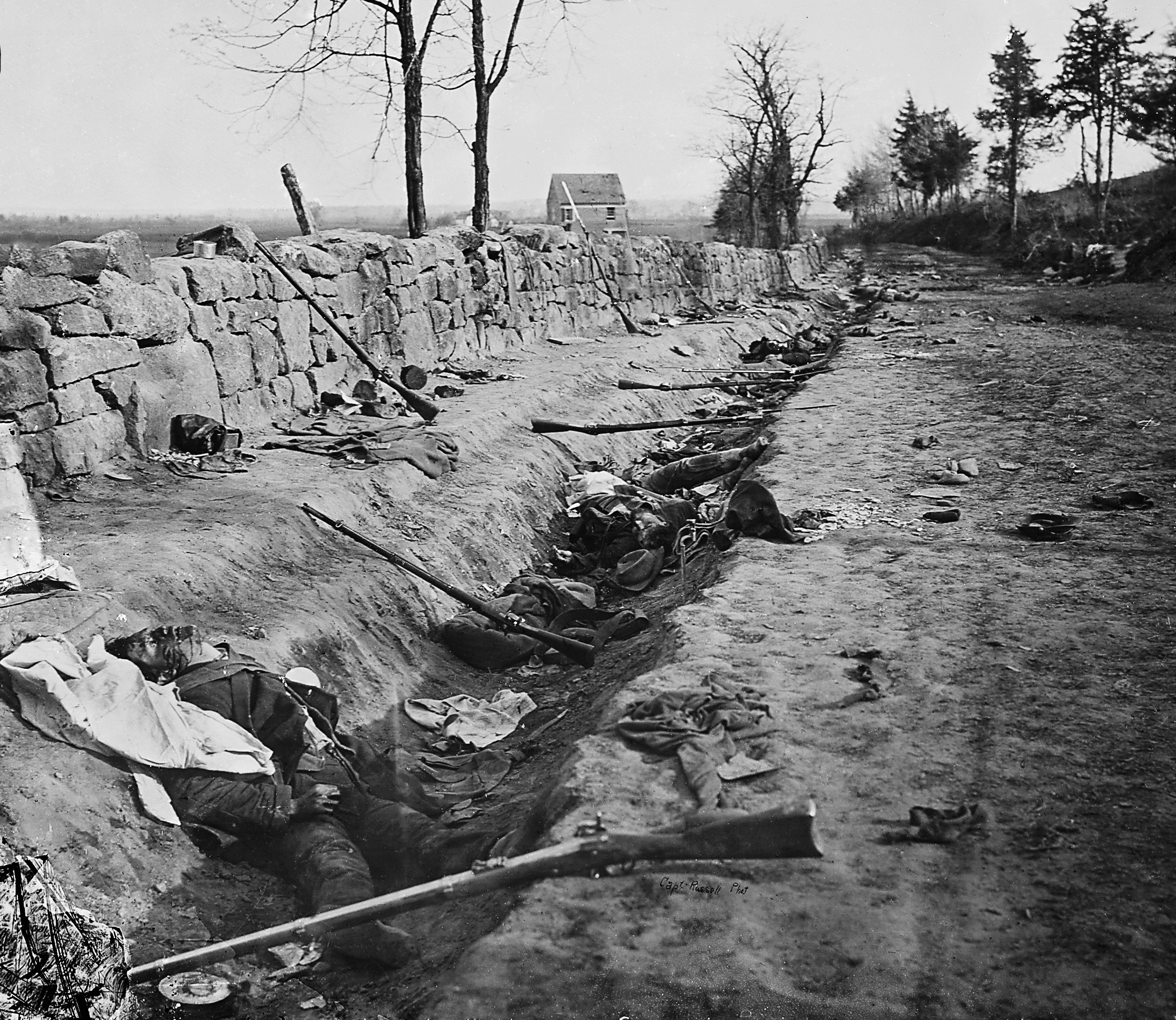 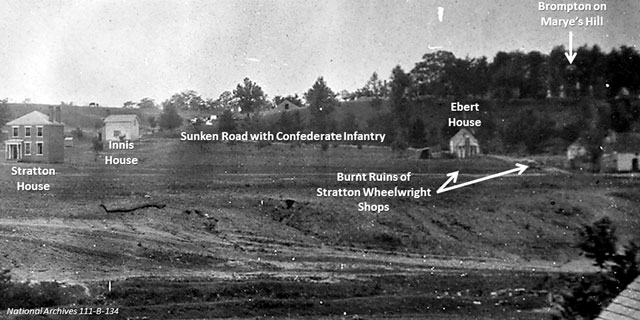 The Richard Kirkland Monument: The Angle of Marye's Heights 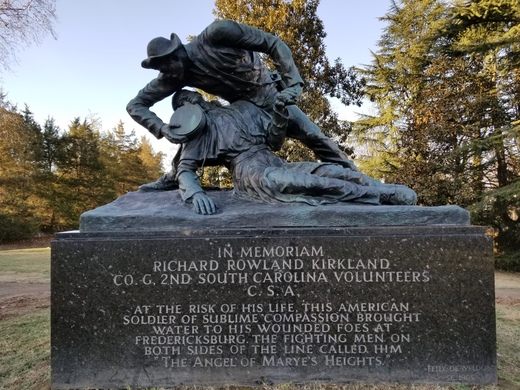 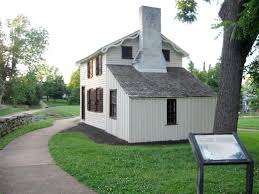 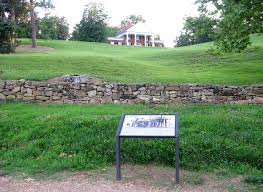 The heights bear the name of the owner of the surrounding property, John L Marye. A large mansion, owned by Marye and named Brompton, stood atop Marye’s heights.[1] The Confederate army, taking advantage of the time-consuming Union blunders, spent the few weeks leading up to the Battle of Fredericksburg entrenching Marye’s Heights. Cannons lined the crest of the heights, while approximately two thousand Confederate infantry dug in behind a four hundred and eighty-yard-long stone wall that enclosed a sunken road at the base of Marye’s Heights, while another seven thousand waited atop and behind Marye’s Heights.[2] Burnside’s Union soldiers would be tasked with attacking these heights but the task would be a bloody and difficult one. A half mile of open fields with the occasional house, fence, and deep canal ditch dotting the approach would need to be traversed in the face of the dug-in rebels. The task seemed so difficult and daunting that a Union soldier, after observing the growing Confederate position, nervously asked his regimental chaplain, “Father, they are going to lead us over in front of those guns which we have seen them placing, unhindered, for the past three weeks?” The chaplain replied assuredly, “Do not trouble yourself; your generals know better than that.”[3] Unfortunately for the Union soldiers, the attacks would indeed be carried out, and the Confederates understood how fearsome their position on the heights appeared. Colonel Edward Porter Alexander, Confederate artillery chief on Marye’s Heights, boldly asserted to his commander General James Longstreet of the strong disposition of the Confederate forces, “General, we cover that ground now so well that we will comb it as with a fine-tooth comb. A chicken could not live on the field when we open on it.”[4]

General Burnside’s plan for the Battle of Fredericksburg was to heavily attack the Confederate position on the opposite flank of Marye’s Heights using 60,000 men of the Left Grand Division under the command of General William Franklin. Meanwhile, the Right Grand Division under the command of General Edwin Sumner, 30,000 men strong, would attack Marye’s Heights in a more diversionary fashion to hold the Confederates in place. Burnside’s generals agreed to the plan, but with stipulations. Near midnight the night before the battle, the Union officers verbally agreed to begin the attacks, but only under the cover of darkness before dawn the next day. Dawn came and went, however. General Burnside did not deliver official orders to begin the attacks until nearly 6 a.m., well past the intended start time.[5] More baffling, when the orders did arrive to the Union right and left wing commanders, the wording of the orders was nearly identical in its directive to, “seize the heights” on both fronts. Moreover, Burnside’s orders seemingly reduced what had been the main bulk of the attack, 60,000 soldiers of the Left Grand Division, to a markedly smaller single division, only 4,500 men strong.[6] The 30,000 man right wing and their assigned “diversionary” movement against Marye’s Heights would devolve into fourteen bottled up, piecemealed, and desperate attacks.

Finally, at 11:30 a.m. a Union brigade commanded by Nathaniel Kimball led the first assault across the fields towards Marye’s Heights. The brigade, bayonets glinting in the late morning sunlight, marched in long battle lines with pageantry and precision. Such sight of martial beauty did not escape the Confederate defenders. As the long blue line advanced, a Confederate artillery officer praised the impressive sight, “At once, our guns began their deadly work with shell and solid shot. How beautifully they came on!”[7] To compound the difficulty for the Union soldiers on their approach, the December temperature uncharacteristically reached nearly sixty degrees Fahrenheit.[8] The open fields turned to a sloppy mix of slippery mud as the soldiers trudged through the slop under a, “a most murderous fire of grape and musketry.”[9] In twenty minutes, five hundred and twenty Union soldiers fell dead or wounded.[10]

The Union Irish Brigade carried out arguably the most famous of the attacks that day. Under a galling fire, the Irishmen advanced over the difficult canal ditch, through the muddy fields, and over the dead, dying, and wounded that virtually covered the field. A few survivors of the previous attacks laid flat on the ground, welcoming any protection that could be had. Some of these soldiers endeavored to dissuade the Irishmen from going any further.[11] But with Irish spirit, green flags unfurled alongside the stars and stripes, and a sprig of boxwood in their caps, the Irish soldiers let out a war cry, repeating “Faugh a Ballagh! Faugh a Ballagh!”—a Gaelic war cry meaning “clear the way” —and marched forward towards the stone wall and the heights. In what may show the resolve and fighting spirit of these soldierly sons of Erin, the Irish troops marched to within fifty yards of the Confederate stone wall, the farthest of any of the assaults that day. But a solid sheet of flaming musketry met the Irish men, preventing any more ground from being gained. Their forward movement stymied, the time was now that the men of the Irish Brigade prepared to finally return fire of their own. William McCarter, a private in the newly organized Irish Brigade regiment, the 116th Pennsylvania, remembered the rattle of musketry and deadly scene at that moment:

"The rattle of musketry was now deafening. Our fire against the enemy was rapid and constant, but its effect could not be seen for the stone wall in front. The rebel fire, although perhaps not quite so rapid as our own, was decidedly much more regular and steadier…Every third man had fallen and, along with some parts of the line, every second soldier had been killed or wounded."[12]

In the end, the Irish fared no better than their other Union brethren. The Irish Brigade withdrew in confusion.[13]

In the aftermath of the battle, acts of kindness did occur on the field. A rebel South Carolinian soldier by the name of Richard Kirkland, unable to stand the miserable cries for “Water! Water!” from the wounded Union soldiers on the field in front of him, attained permission to fill canteens and deliver the much sought after liquid to his wounded, beleaguered Union enemy.[14]  In 1965, Kirkland’s ancestors erected a statue to the young South Carolinian soldier, and the monument resides on the battlefield below Marye’s Heights to this day. By the end of December 13th, approximately 8,300 Union soldiers fell killed or wounded during the attacks, while 1,800 Confederate casualties laid dead or wounded in the sunken road and across Marye’s Heights.[15]  The battle ended in a decisive Confederate tactical victory.

The seemingly futile nature of the Union defeat deeply demoralized the Union Army, perhaps more so than any other battle in the American Civil War. President Abraham Lincoln, understanding the nature of the defeat and the poor timing (The Emancipation Proclamation had only two weeks before being set to go into effect), sent an official message to his soldiers in the battered and bruised Army of the Potomac. In that message Lincoln addressed his soldiers:

"Although you were not successful, the attempt was not an error, nor the failure other than an accident. The courage with which you, in an open field, maintained the contest against an intrenched [sic] foe…show that you possess all the qualities of a great army…Condoling with the mourners for the dead, and sympathizing with the severely wounded, I congratulate you that the number of both is comparatively so small. I tender to you…the thanks of the nation."[16]

Whether or not these words consoled the men of the army, the war would go on for another two and a half years, with more wounded, death, and destruction on both sides to be had.

Much of the battlefield at Fredericksburg has been overtaken by modern development. If one visits the battlefield today, Marye’s Heights will be visible alongside a reconstructed stonewall that lines where the original used to occupy. A private residence which stood along the stone wall during the battle called the Innis House still stands to this day, revealing bullet holes and battle scars still visible one hundred and fifty-seven years later. The Marye mansion, Brompton, still sits atop the heights and currently serves as the home of the president of the University of Mary Washington. Though modern development covers the once bloody fields the Union army traversed towards Marye’s Heights, one cannot help but smell the gun powder and hear the roar of the cannon when standing atop Marye’s Heights today

Longstreet, James. “The Battle of Fredericksburg.” in Battles and Leaders of the Civil War vol. 3. New York: Thomas Yoseloff Inc.,1956.

Wade, Benjamin. The Conduct of The War: Report of the Congressional Committee on the Operations of the Army of the Potomac. Causes of its Inaction and Ill Success. Its Several Campaigns. Why McClellan was Removed. The Battle of Fredericksburg. Removal of Burnside. New York: The Tribune Association, 1863.

War Department, United States. The War of the Rebellion: A Compilation of the Official Records of the Union and Confederate Armies, ser. 1, vol. XXI. Washington, D.C.: Government Printing Office, 1888.