Houck's Chapel was built in 1888 and named after the Methodist preacher Reverend William K. Houck (1855-1950), who previously held a massively successful ten-day revival event in the town in 1887. Houck preached at the chapel until 1947, when he was unable to make the trip into town from Morganton, NC, and his congregation disbanded after his death in 1950.The surrounding graveyard has been used since 1890, and the chapel was used by multiple Protestant groups throughout the late nineteenth and twentieth century. The building was added to the National Register of Historic Places in 1985 for its its religious significance in the development of Hickory and for being a prime example of a simple frame church typical of the area. In 2004, the chapel was donated to and restored by the Hickory Landmarks Society, and it was rededicated in 2009. Today, the building is rented out and used for special events. 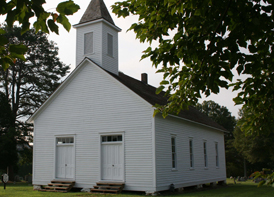 Following the Civil War, Hickory began to achieve economic growth with the inception of new businesses such as the Piedmont Wagon Company, and the town's population nearly doubled between 1870 and 1900. As more people started calling Hickory "home," a number of churches were constructed, which began to fragment the community into various religious pockets. The Houck's Chapel hearkens back to the days when the religious community was not as fragmented.

In 1887, Reverend William K. Houck (1855-1950), a Morganton resident who also worked as a mortician, carpenter, peace officer, and fire chief, hosted a successful ten-day Methodist revival event in Hickory. The revival was supposed to be held in a local schoolhouse, but the building was too small for the number of attendants, so an arbor was quickly constructed for the event. The following year, James Monroe Frye and his wife, Emeline Winker Frye, donated a plot of land that would be used to house the chapel, which was named after Reverend Houck. However, the Frye family had two stipulations: the land could only be used to preach the gospel and that the building could be used by any of the white Protestant faiths. Failure to comply would result in the land being returned to Frye or his heirs. Thus, the building was also utilized by Lutheran and Baptist congregations.

Houck would frequently travel over twenty miles, both ways, to preach in Hickory, and he would continue to do so until 1947, when he was physically unable to make the trip from Morganton. Following his death in 1950, the Methodist congregation disbanded, though the building was still used by other local congregations. Houck's success in establishing a Methodist congregation in Hickory is an example of how one man can greatly inspire those around him and create a strong sense of community.

On March 15th, 1985, the Houck's Chapel was added to the National Register of Historic Places for its religious significance and its architecture. The building is in the simple frame style, typical of churches in the area during this time, and the land surrounding the chapel would be used as the town graveyard beginning in 1890. Though originally a one-room chapel, in 1975, the church was separated into multiple rooms, some of which were used to host Sunday school. In 2004, the building was donated to the Hickory Landmarks Society to help save, restore, and preserve the building, which had fallen into disarray. The building was rededicated in 2009 and can now be rented out to host special events, such as wedding or religious education events.