112 Lakewood Road, Waterbury, Connecticut is a unique historical landmark that has not received enough historical attention. The old carousel pavilion of Lakewood Park still stands alone as a relic of joy and communal social gatherings by the people of Waterbury Connecticut since the beginning of the twentieth century. The lake was the first part of a waterfront property belonging to the wealthy Pearsall family of Waterbury. The pavilion was deteriorating, yet, because of city residents who donated money and time for the restoration in 1986, it is still standing and one of the few historical landmarks left to the fantastic Lakewood Park of the past.

The Carousel at Lakewood Park in the 1930s. The executives of the Philadelphia Toboggan Company that created the hand painted horses in 1925 are to sitting atop the horses. Each horse is unique. 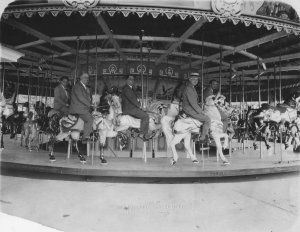 This is where people would launch their boat in the lake and taken in 1905. 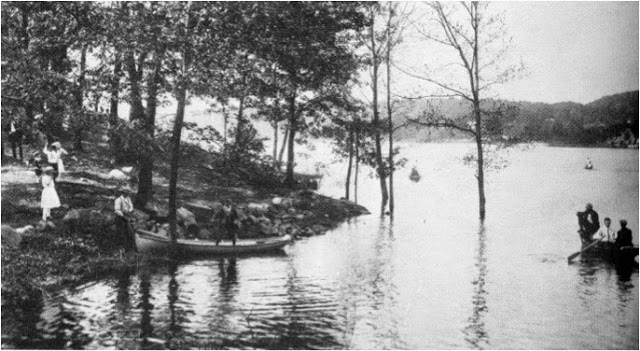 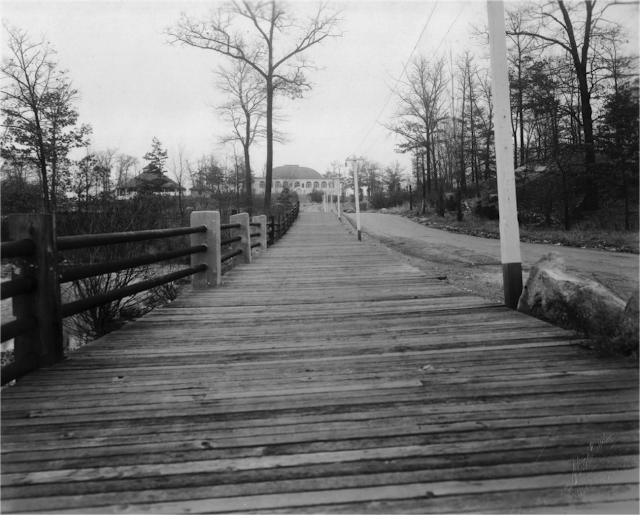 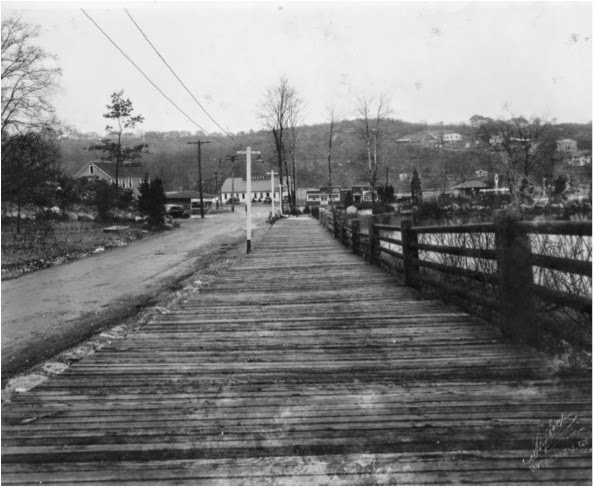 Winners of Minuature Golf in the 1920s. Mattatuck Museum, collection. 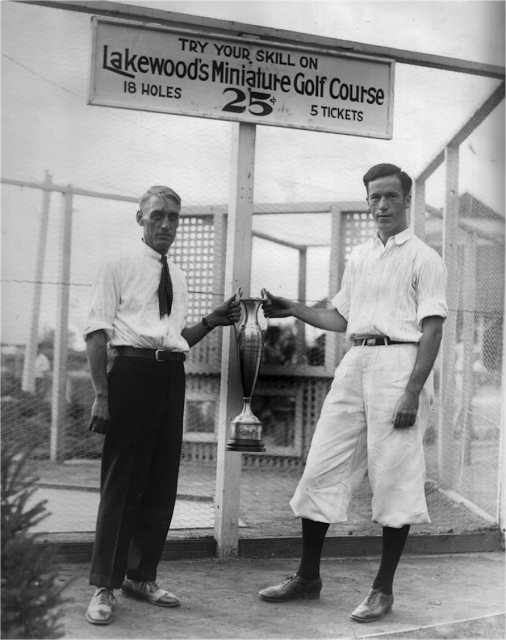 The main entrance where the road and pond meet. This issue was taken in 1907 and became a picture on a post card. A Mattatuck Museum, collection. 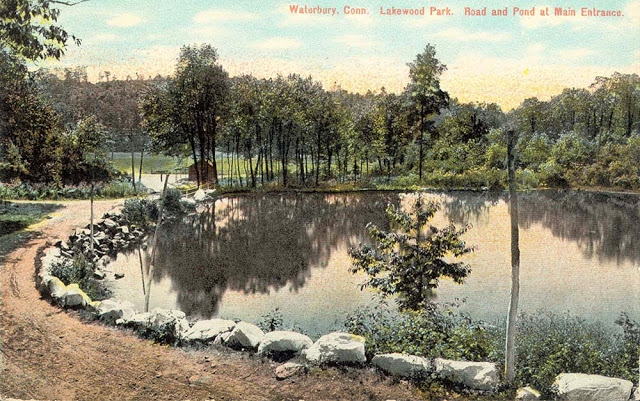 The "roller coaster" from the 1930s sold to a New Hampshire amusement park in 1936 after six years at Lakewood Park. It is still operating. A Mattatuck Museum Collection. 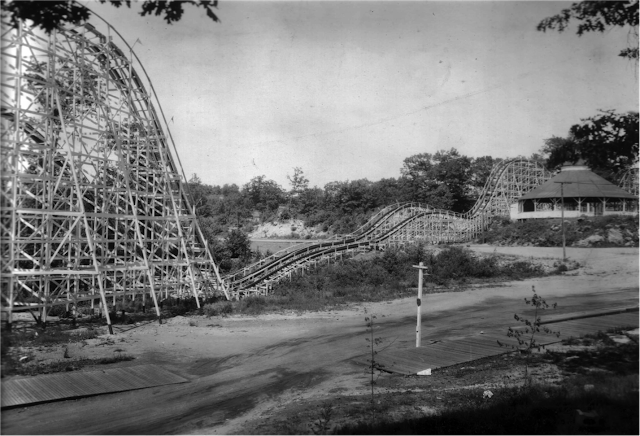 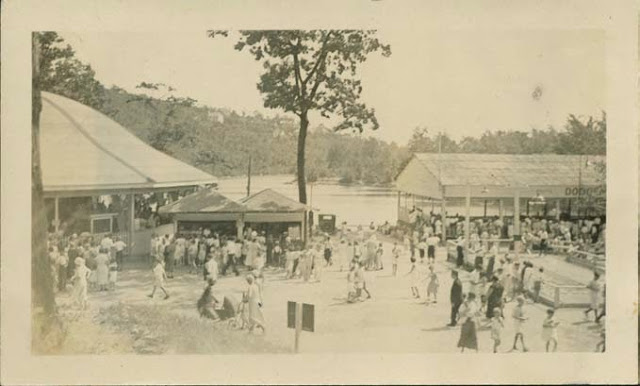 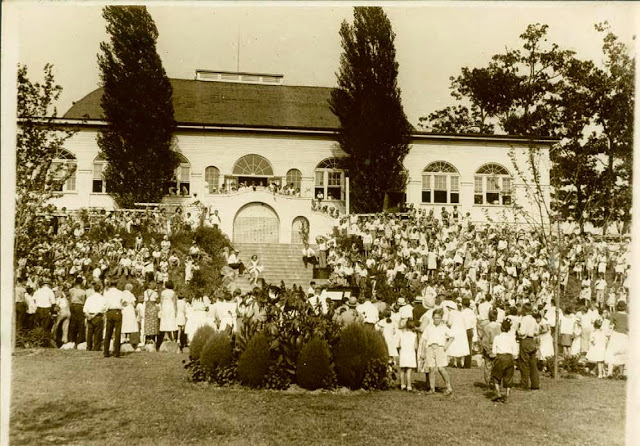 The beach part of the lake with water attractions for the family, 1930s Collection of City of Waterbury, Silas Bronson Library Digital Photos. 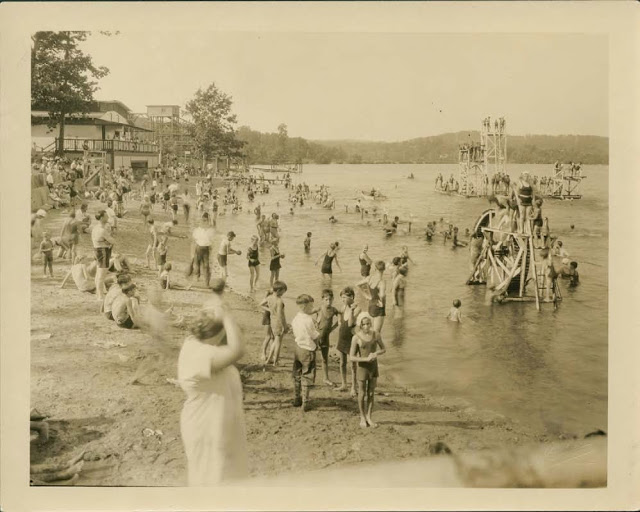 Lakewood Park in the 1930s and 40s. The Carousel Pavilion to the left. Collection of City of Waterbury, Silas Bronson Library Digital Pictures. 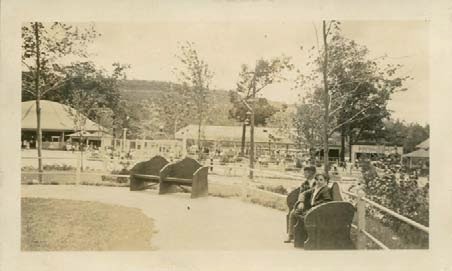 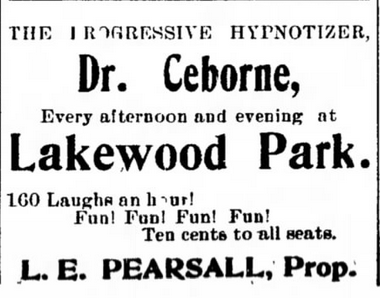 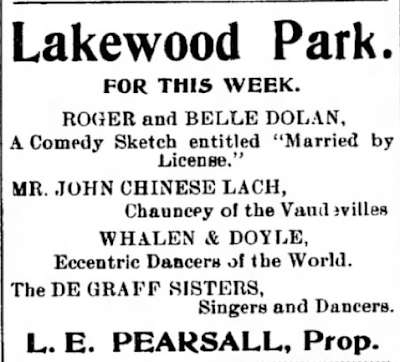 A Roseland Dance Hall advertisement, and other activities at Lakewood Park. Date is unknown, however this event would be before 1952, when the dance hall was demolished. 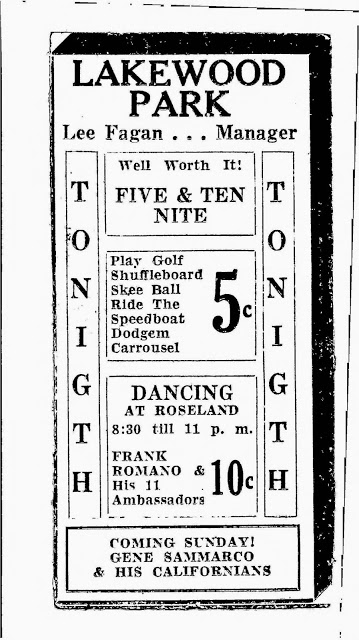 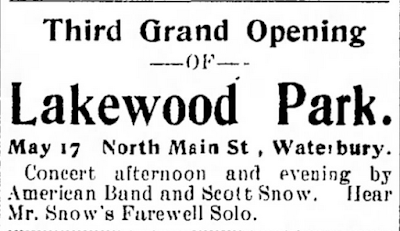 The carousel pavilion before its much needed face lift in 1986, by city donors. 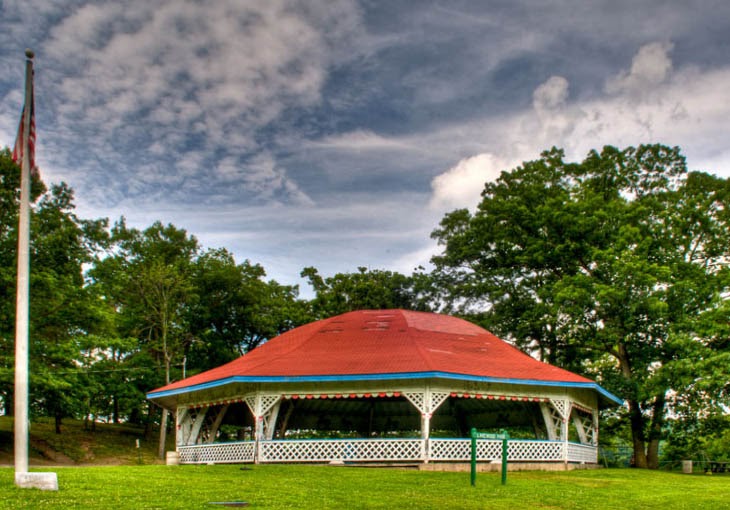 This is the granddaughter of Laura Pearsall and was said to have had a close friendship, with Clark Gable. Dolly O'Brien was married four times, however, never to Clark Gable. 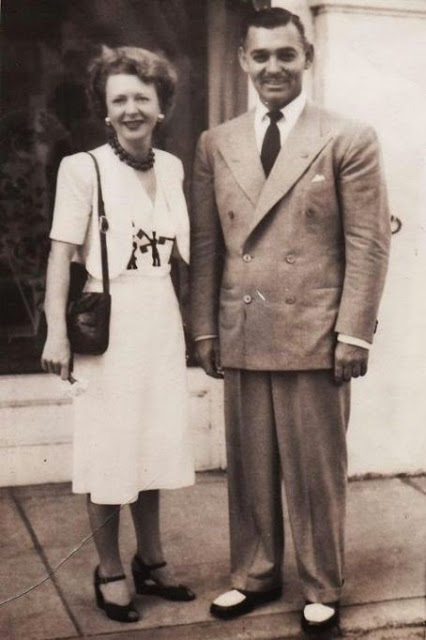 Laura, Pearsall opened 17 acres to the public in 1896, she said that Lakewood Park was a haven for women and children to enjoy the summer “unmolested,” and free from “insult.”[1] She received help from investors in New York, she managed to extend the city trolley line to the entrance of her park for Waterbury patrons. She had a team of six police under the command of former Waterbury deputy sheriff W.J. Rigney for the safety of park dwellers.

Laura kept a constant venue of live music going almost daily, in this period, the new music and dance created by Black Americans called Jazz and swing dancing leads to the era when the country goes “dance mad” (1910-1920), [2] culminating to the "roaring twenties" with such dance crazes as the Charleston, Turkey Trot, the Fox Trot and more. So, the added Roseland Dance Hall to Waterbury Lakewood Park added by Laura Pearsall is a perfect historical piece of Americana in the city of Waterbury: The hall was demolished in 1952.[3]

Laura and her son Zophar Pearsall decide to hand over the property in 1900 to two men of the theater named Eugene “Jean” Jacques, and William B. Richardson who rename it Forest Park. They erect outer gates, construct a road to replace the dirt one leading to the park, put up pavilions with drinking fountains fed by a spring. The partners manage to raise the water level by three feet and construct a bandstand over the water for live entertainment. The merry-go-round, and arcade would have been a sure-fire hit with the city’s children, and an outdoor vaudeville theater would attract hundreds of patrons.

Laura Pearsall and her son in nineteen twenty-two regained ownership and renamed it Lakewood Park. Waterbury saw a greater expansion in the park’s usefulness with a miniature golf course in 1920, a 45,000-roller coaster, and a carousel in the 1930s, a diving pier complete with performances, and state sponsored swimming meets. By 1928, back taxes cause the property to be seized by the city. The city turns the property into a municipal park, and it has been this way since. However, the features of the park were left to deteriorate and get phased out one by one with the carousel pavilion as the last relic standing.

All was not lost when the bustling municipality[4] took it over for the first decade or so. By 1930, such entertainments were, an outdoor vaudeville theater, balloon ascensions, rowboat, small steamboat excursions around the lake, concession stands sold ice cream, confectionery, peanuts, and popcorn. It housed a bar, a restaurant, and the most positive aspect of it was the lake for bathing in the summer for city children and their families throughout the twentieth century.

Lakewood Park, as the decades progressed was left to deteriorate and all concession stands closed, fountains left to broken pipes no longer fed by clean spring water, the roller coaster was sold to a park in Salem, New Hampshire and renamed Yankee Cannonball[5] ride in 1936, yet, still functioning today. The carousel was first sold intact and as recent as 2009, the city had a chance to repurchase the piece of Waterbury history and never did.[6] The last piece of the past standing is the pavilion that once housed the carousel. It continues to swallow the echoes of the city children’s’ laughter, and their family’s glee as they appreciate the shelter it provides for their peaceful social gatherings. The lake is permanently closed after feeble attempts to rid the park of the contamination in the water because of the families of geese.[7]

The Chicago Defender, a prominent African American newspaper famous for consistently covering any events in the Black communities nationwide mentions the Roseland Ballroom of Lakewood Park on September 4, 1926.[8] No mentions of this event were found in the Waterbury periodicals however, the Defender reports that on Aug 19th in the park there was an evening dance, following an all-day event and cookout sponsored by the various Elks organizations of Connecticut. This night was bound to be alive with dance and music of the roaring twenties right here in Waterbury Connecticut at the historic Lakewood Park.