The Storrow Memorial Embankment is located along David Mugar Way, near the Storrow Lagoon and Fairfield Footbridge. This often overlooked memorial was dedicated to James Jackson Storrow II and his wife Helen Osborne Storrow. As stated on the tablet, it was placed on the “Margin of the Basin” in 1948. The memorial commemorates the contributions of Sorrow and his wife in the creation of the Charles River Dam, and subsequently the Esplanade. Their campaign was to push for the land to be preserved and turned into a public water park for everyone to be able to use and enjoy. 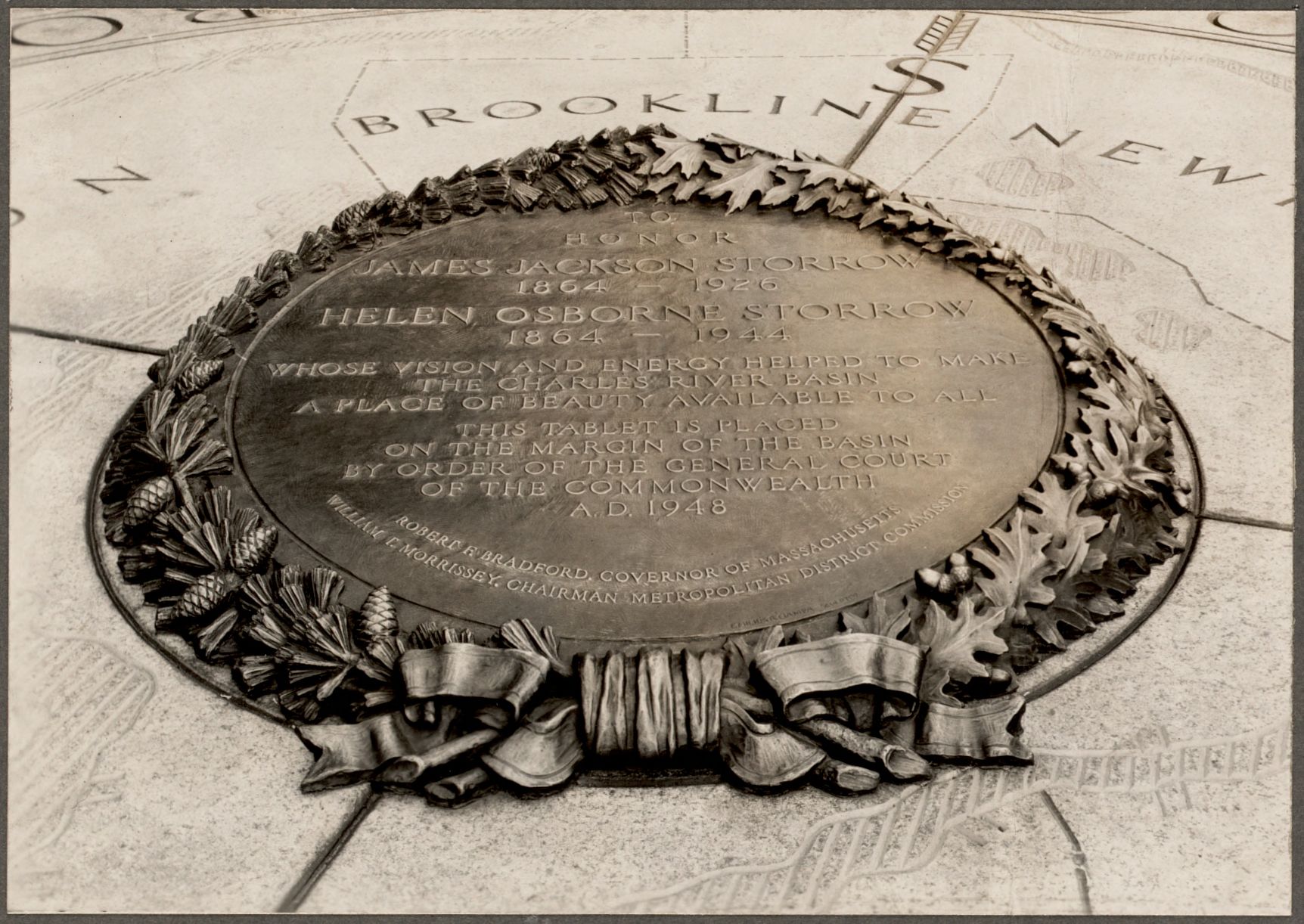 The creation of the Charles River Esplanade is a story of the transformation of the what used to be a tidal estuary affected by changing tides and awful smells from the raw sewage and the mudflats. The renowned landscape architect Charles Eliot envisioned a plan to turn this tidal estuary into the Esplanade. His goal was for there to be a park in Boston similar to the Alster Basin in Europe with people enjoying themselves on land or on the water in boats (Cox). The Alster Basin in Hamburg was created by damming the of Alster River, and is made up of two lakes with surrounding parks (Alster Lakes). However, in order to bring this dream to reality in Boston, a dam needed to be built in order to regulate the water levels of the Charles River. To do so, Eliot had to overcome public resistance towards the construction of the dam; however, despite his efforts lobbying he was not able to do so before his death in 1897 (Cox).

Resistance towards building the dam came from multiple sides. Those living along Beacon Street on or near waterfront properties were the most resistant. This was because of the proposed plan to finance the construction of the dam that would potentially lead to lower property values for their houses and block their views. Further opposition came from people concerned about the environmental effect of building the dam. In the face of this resistance and the death of Charles Eliot, an investment banker named James Jackson Storrow II stepped up and pushed for the construction of the dam. Storrow was the leading figure, and most of the responsibility for the ultimate completion of the dam can be attributed to him.

James Jackson Storrow II was born in 1864 in Boston, Massachusetts to a prominent lawyer. He graduated from Harvard College as part of the class of 1885 (Boston Daily Globe). While on a hiking trip in Switzerland, Storrow met his future wife, Helen Osborne, the daughter of a prominent New York social activist (Cox). After graduating from Harvard Law School in 1888, Storrow practiced as a corporate lawyer for about twelve years (Boston Daily Globe). He left the law firm shortly after his father’s death in 1900 to join the investment bank Lee, Higginson & Co., where he quickly rose through the ranks to become senior partner. During this time, he accumulated his fortune and became involved with General Motors, where he served on the board until 1916. Storrow was also very involved within the Boston community, assuming various public service roles. As a prominent member of society, he fought against prejudices towards immigrants, Jews, and Catholics. He was an active member of many public organizations including the Boston City Council, the Boston School Committee, and the Boston Chamber of Commerce (Cox).

Of his many positions and social activist roles in Boston, Storrow is best known for his contributions to getting the Charles River Dam built (Cox). Storrow shared Eliot’s idea of creating open spaces with fresh air that the people within the Boston community could enjoy. For this reason, he was the focal point of the movement. Storrow began the effort to construct the dam by gaining public support from other prominent members of the community by organizing a letter-writing campaign. When his first legislative bill in support of constructing the dam was rejected, he proposed an alternative bill to create a committee to determine the feasibility of the project and personally hired lawyers and engineers to present his case. The plan was approved by the Legislature in 1903, funding was provided for the construction of the dam, and the project was completed in 1910 (Cox). The dam created a freshwater basin, which led to the appearance of the embankment that was later filled to create the Esplanade.

Despite the completion of the dam and the creation of the Esplanade, Eliot and Storrow’s vision of a public park on the water for many to enjoy never came to fruition. Few people visited the Esplanade, and apart from occasional college crew teams, there were no boats sailing on the now less choppy waters. Many solutions were proposed to attract more visitors including shade, boathouses, and public events; however, none of them were realized before Storrow’s death in 1962.

Storrow’s devoted wife, Helen, had always been at his side helping him through the process and sharing in his dream for the Esplanade to become a public water park for all to enjoy. Helen inherited a fortune from her husband’s prosperous career as a businessman. To memorialize James Storrow and his dedication to the community of Boston, Helen pledged to donate one-million dollars of her inheritance in his honor towards the improvement of the Esplanade. Her generosity and commitment to the vision inspired others to also donate. In addition to her contribution, a legislative commission proposed the widening and addition of playgrounds, parks, boathouses, and many other facilities to the Esplanade. The commission raised another $2.3 million and an additional $400,000 was donated on behalf of the City of Boston (Cox).

The renovations that ensued focused on providing more shade, and making boating easier were led by Charles Eliot’s protégé, landscape architect Arthur Asahel Shurcliff. When Shurcliff’s plans were completed, Storrow’s dream for the creation of this open space for everyone to enjoy along the river was finally realized. Many citizens were attracted by the beautiful scenery, and the space that fostered recreational activities on land and water. To commemorate and acknowledge their fight for the actualization of their dream of the Esplanade, the Storrow Memorial Embankment was erected and formally dedicated to James Jackson Storrow and his wife Helen Osborne Storrow in 1948.