The Stanley-Whitman House, located in the historic village of Farmington, was likely built around 1720, although it was originally thought to have been built circa 1660 because of its overhang construction. It is a National Historic Landmark and operates today as a house museum furnished with period antiques to reflect the everyday activities of colonial life in Connecticut. Surrounding the house are period raised-bed gardens, an apple orchard, and heritage stone walls. The house has been owned by farmers, a weaver, a shoemaker, and a justice of the peace. Descendants of the Whitman family inhabited the house until 1922. The museum also manages Memento Mori, Farmington’s historic cemetery on Main Street, and the Village Green. The public service areas of the museum, constructed in 2004, include a modern classroom, a period tavern room, post-and-beam Welcome Center, research library, exhibit gallery, and collection storage area. Digital projects include "Digital Farmington," a blog and map that highlight the history of the Farmington Valley, and "The History of Captive People," a project that documents the history of enslavement and bondage in Farmington. 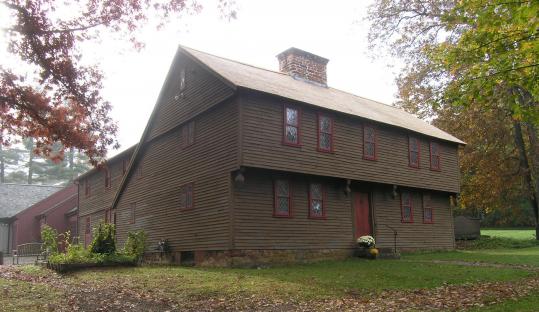 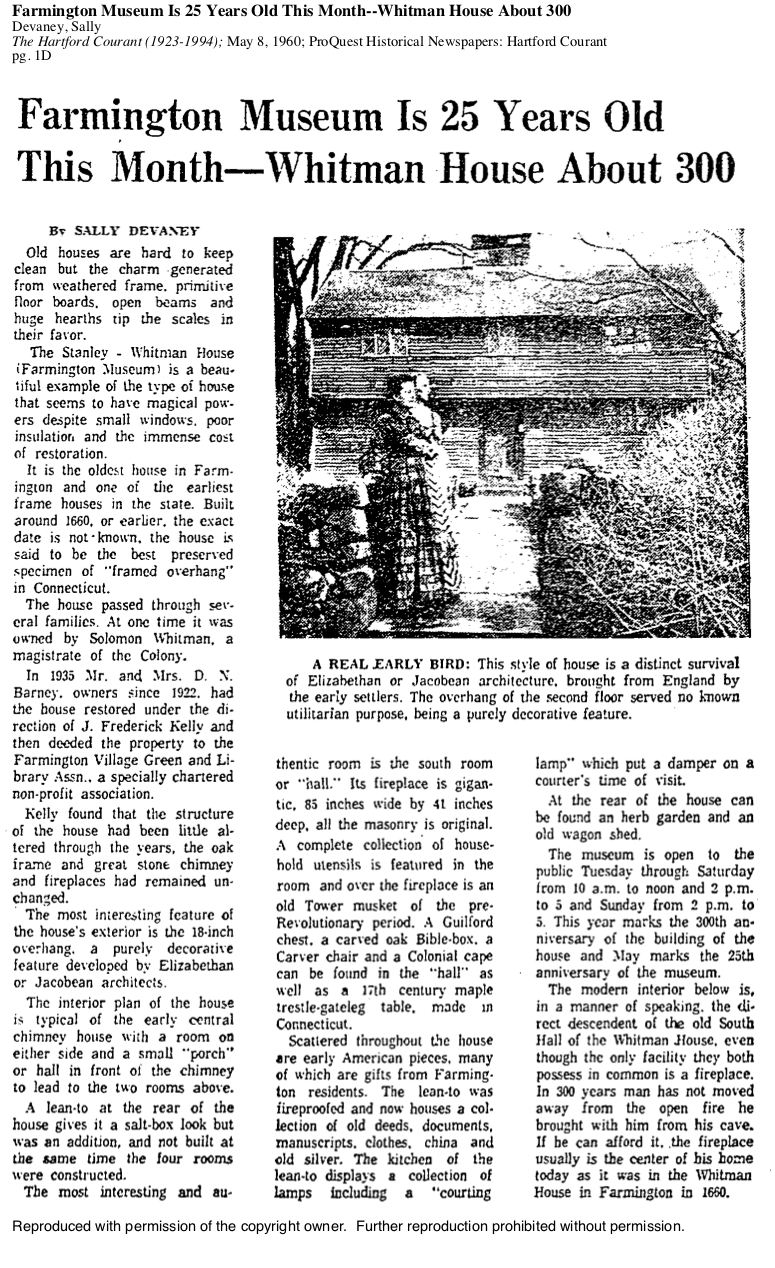 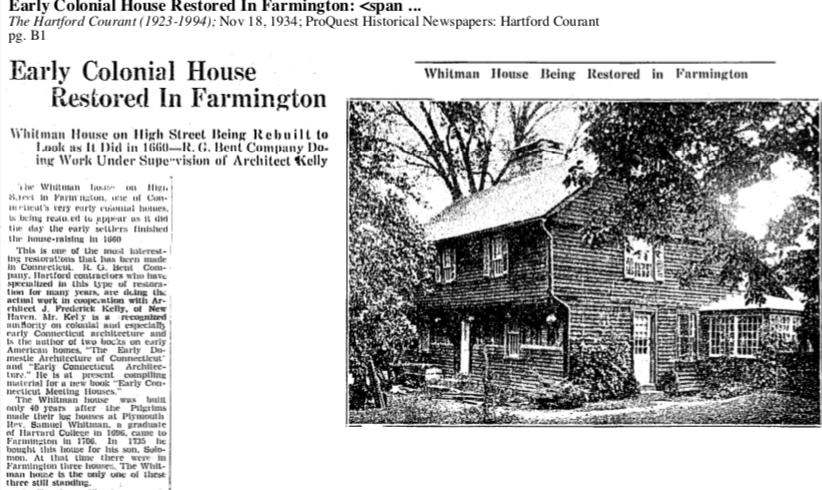 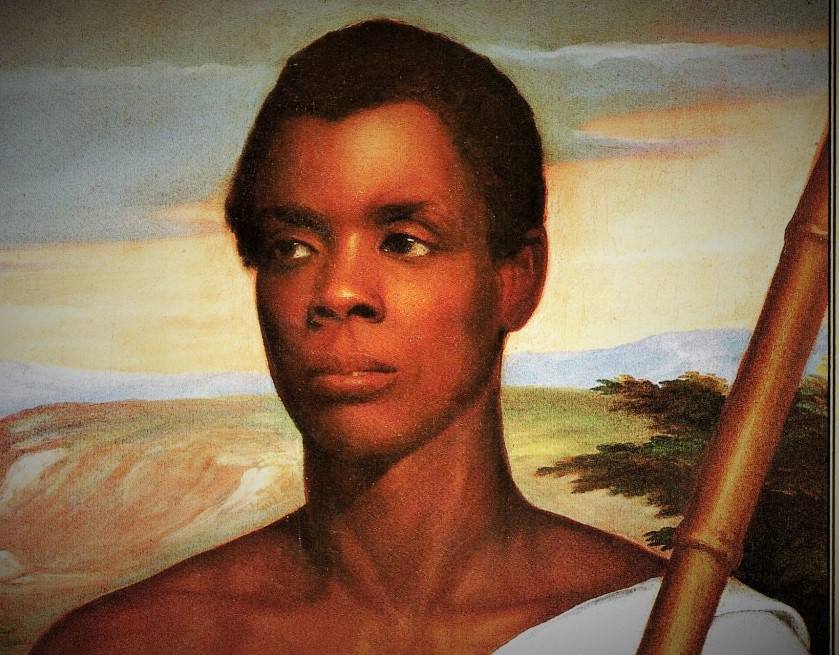 Louis B. Wright, the great historian of arts and culture, considered the Stanley-Whitman House one of the best examples of the late medieval tradition in New England house-building. In his book The Arts in America (62-63), Wright called it "as typical of its time and place as any that could be found." He assumed as others had, that the house was constructed about 1660. When architectural historian J. Frederick Kelly restored the house in 1934 and 1935, he too thought it a product of the seventeenth century. Only later did extensive research by a Yale University-led archaeological team reveal it was not constructed until 1720. The museum was then redesigned to showcase two time periods: 1725 to 1735, when Mary and Thomas Smith occupied the house, and 1736–1772, when the first generation of Whitmans lived there. A Farmington High School archaeological field school in May 2012, also uncovered further objects on the property.

The first dwelling house was initially constructed by John Stanley, Jr., though he probably never resided there. Ebenezer Steele purchased the property and expanded the structure. Steele was both a farmer and a weaver, and the house today has a display room devoted to the local eighteenth-century weaver's craft complete with a loom. The house passed to Steele's daughter, Mary Smith, who sold the house in 1735 to Rev. Samuel Whitman.

The house's most prominent owner, Solomon Whitman, was a shoemaker, farmer, and justice of the peace. His legal papers are housed at the Connecticut State Library. Whitman eschewed corporal punishments for the most part, but he did advocate binding individuals in servitude if they stole goods worth more than forty shillings.

In 1839 a ship, La Amistad, transporting 53 illegally captured Mende people from Sierra Leone, was traveling around Cuba to deliver the enslaved to plantations. The captives mutinied and sailed the ship northward. Forty-four surviving captives sailed the ship to Long Island, New York, where they were taken into custody aboard the USS Washington. They were first jailed in New Haven. After 18 months of trials and appeals, the United States Supreme Court declared them free people. While they awaited their return home, they resided in Farmington, and some of them worked in the kitchen at the Stanley-Whitman House. Farmington residents helped raise funds for the Mendes' return to Africa.

The Stanley-Whitman House preserves Farmington's local history, but its volunteers add to historical research with the Captive Peoples project, Digital Farmington, and other contributions. Twice-yearly symposia, Fall and Spring, focus on local history.

Highlights of the Museum Collection

The Stanley-Whitman House has many items of material culture from the 17th through the 19th centuries. Although the objects mainly reflect the possessions of the English colonists who settled Farmington and their descendants, there are items that reflect the Tunxis and African cultures. A basket made by Pually Mossuck (Tunxis-Wangunk-Quinnipiac-Mohegan) whose family was prominent in the Brothertown Movement is on display. Five items connected to the Amistad include a “Kitchen Directory” listing the household tasks that the captive Mende were to perform, a watercolor of “Josheph Cinquez,” a letter from the Mende captives to the lawyer and congressman, John Quincy Adams, a canteen carved from a coconut shell supposed to be from the Amistad and a buttermold said to have been carved by Cinque.