The Logan Airport 9/11 Memorial at Logan International Airport is dedicated to the passengers and crew of American Airlines Flight 11 and United Airlines Flight 175. Both planes departed Boston from Logan Airport on September 11, 2001 and were hijacked and flown into the World Trade Center in New York City. While dedicated to those who perished in the tragedy, it was also built to recognize the work of all Logan Airport employees in keeping the airport and the skies safe. It offers a place to reflect, remember, and comfort members of the Logan Airport community who lost friends, colleagues, and family in the September 11 attacks. The memorial takes the shape of a glass cube, with the victims' names inscribed inside. 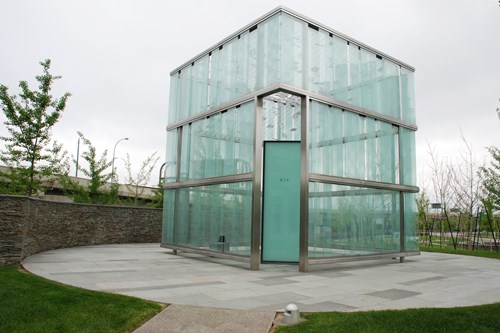 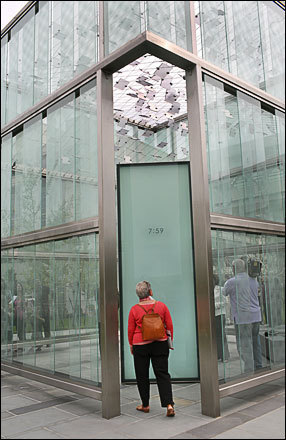 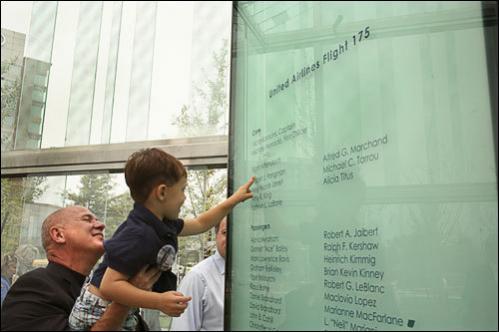 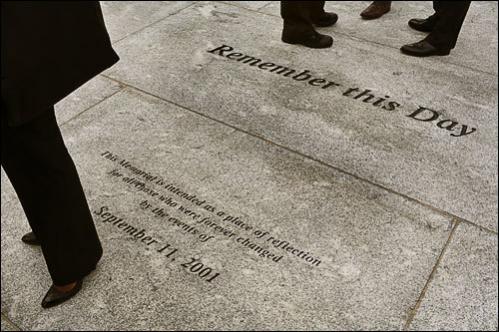 Before collision, crew members of both flights made efforts to impede the hijackings and prevent the crashes. On Flight 11, flight attendants Madeline Amy Sweeney and Betty Ong reported information during the hijacking to workers on the ground, including the seat numbers of the hijackers which lead to their identification. The information they provided was critical in creating a timeline of the events of the attacks.

September 11 was a day of national tragedy and in reaction many Americans sought to memorialize those who died. Soon after the attack, people created impromptu memorials and shrines to those who had died, and people all over the country chose to show their respects by flying American flags. At Logan Airport, employees spontaneously raised American flags over American Airlines Gate B32 and United Airlines Gate C19, the respective gates which the Flight 11 and Flight 175 departed from (the flags are still flying today).

In short time, planning for more permanent memorials began. Soon the Airport 9/11 Memorial Design Advisory Committee was founded and worked together with the Massachusetts Port Authority, Logan Airport, and the families of 9/11 victims to decide what the purpose and meaning of the memorial should be. At Logan Airport in Boston, MA a two-acre plot was allocated for the construction of a memorial, part of which was donated by The Logan Hilton Hotel across the street, which had housed the Massachusetts Port Authority’s Logan Family Assistance Center, who provided for families of 9/11 victims in the aftermath of the attacks. The Advisory Committee began to solicit designs in 2003. The winning design was by Moskow Architects, a firm located in Boston and was unveiled in 2006.

The main feature of the design is a glass cube structure, which can be entered. Inside are lists of the passengers and crew of both Flight 11 and Flight 175, accompanied by their departure times. From the ceiling of the cube hang more pieces of glass which fracture the light. The cube sits at the junction of two winding paths amidst simple landscaping and at the path’s exit is an inscription in the ground reading:

This Memorial is intended as a place of reflection

for all those who were forever changed by the events of

The monument is perhaps most noticeable at night, when it is lit from the inside out, like a beacon of light in a time of darkness.

Construction of the memorial began in the summer of 2007, and upon completion a dedication ceremony was held on September 9, 2008. The ceremony included remarks by members of the Advisory Committee and members of the Massachusetts Port Authority Board of Directors, as well as Massachusetts Governor Deval Patrick. At the monument’s opening, the memorial was established not only as a place for reflection and healing but also for education. It is proposed that the memorial’s location in a tranquil park within a hectic airport could provide comfort and reassurance to those who need it. Before the grand opening for the memorial, the families of 9/11 victims were allowed to roam around the park and main structure before it was open to the general public.