Dedicated in 2005 by the Sons of Union Veterans of the Civil War, this monument commemorates loyal Americans who resisted Confederate raiders and marks the furthest incursion of any Confederate faction in Iowa during the Civil War. The marker claims to also be the furthest Northern incursion, but there were several other raids and attacks by pro-confederate guerillas in other states, including Vermont. Nonetheless, the raid that occurred here in 1864 is significant and serves as a reminder of the brutality of the war and the frequent attacks by are guerillas against civilians. October 12, 1864, Missouri guerillas, led by Jim “Bill” Jackson, ventured into southern Iowa. Ostensibly fighting in support of the Confederacy, the raiders were primarily motivated by the opportunity to use the war to steal money and horses. They killed three men and left behind a trail of destruction. 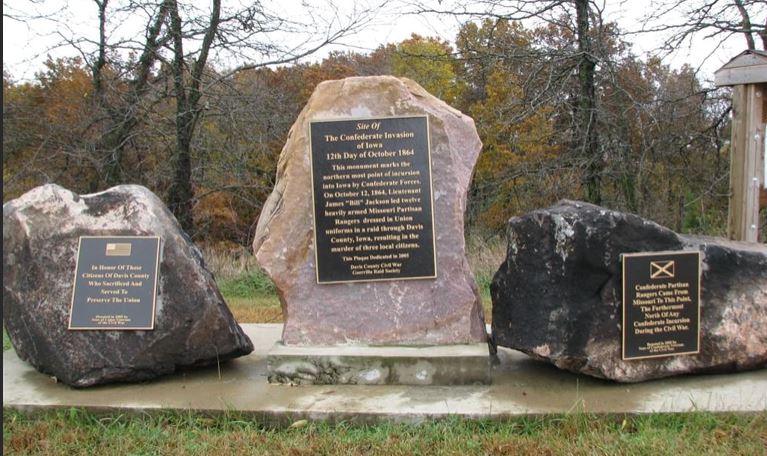 By early October of 1864, the American Civil War was in its final stages. The Mississippi River was under Union control, Atlanta had fallen to Union forces, and the November election that would result in the re-election of Lincoln over the accommodationist McClellan was near. Despite some Southern sympathizers along the Missouri line, Iowa remained firmly in control of the pro-Union citizenry and there was no need to quarter soldiers in the area. As a result,t Missouri guerrillas saw southern Iowa as an opportunity to commit crimes with little chance of reprisal. One of these events occurred in Davis County, Iowa on Oct. 12, 1864.

On this date, Jim “Bill” Jackson and about twelve “Missouri Partisan Rangers” conducted a day-long raid that would result in three civilians being shot and left for dead, thousands of dollars stolen from innocent farm families, and scores of others abducted during the terror campaign. The assault began in the morning as the raiders, dressed in stolen Union uniforms, entered the southeast corner of Davis County, Iowa on horseback. The raiders first stopped at the farm of John Brumley, demanding “greenbacks.” After ransacking Brumley’s farmhouse, Jackson and his raiders left with $80, cursing their bad luck at not finding more currency. Over the course of the day, Jackson and his men would cover about forty-five miles and visit twenty-four different farms, looking for cash and horses at each stop. They also shot and killed three men, leaving their bodies uncovered on the Iowa soil.

In the course of the raid, Captain P.H. Bence, of the 30th Iowa Infantry was shot in the back of the head while riding a horse as a prisoner of the raiders. Thomas Hardy, a wealthy farmer, was also shot in the head as Jackson tried to steal some of his horses. Eleazer Small was also shot and killed. Small threw his hands up when confronted by Jackson. Jackson shot the defenseless man three times with his revolver.

Jackson’s raid serves as an example of the violent tactics often used by Missouri guerrilla units during the Civil War. That Iowans were the victims, in this case, is particularly noteworthy. Davis County is described, according to the monument, as “the northernmost point of incursion into Iowa by Confederate forces.” The placement of the monument plaque is at this northern-most point.

The “Confederate Invasion of Iowa” monument was erected in 2005 by the Davis County Civil War Guerilla Raid Society. This monument contains three plaques. One recognizes the citizens of Davis County “who sacrificed and served to preserve the Union.” This plaque was donated in 2005 by the Sons of Union Veterans of the Civil War. Another plaque, donated in 2005 by the Sons of Confederate Veterans of the Civil War, recognizes its location as “the furthermost north of any Confederate incursion during the Civil War.” This claim by the SCV is not accurate as there were numerous other attacks by Confederates, including some in New England. The final, and most dominant plaque briefly describes the Jackson raid and the atrocities committed by Jackson's force.

While the efforts of loyal Americans to resist the demands of these raiders is recognized by this Civil War monument, the inclusion of a flag associated with the Confederacy next to an American flag has raised concerns in the wake of the use of the same flag by modern-day white supremacists. Given the nature of this marker and the atrocities committed by pro-Confederate forces, the propriety of including a flag associated with the Confederacy has led local citizens and historians to discuss the nature of this monument and several others in Iowa.