William Frederick Cody, more famously known as “Buffalo Bill,” was a scout for the Union Army’s Seventh Kansas Cavalry during the last years of the Civil War. He earned his namesake while hunting buffalo as an employee of the Kansas Pacific Railroad, known for his expert shot. From there he would go on to be the greatest showman of his day with his famous “Buffalo Bill’s Wild West” show bringing him both fortune and fame. He employed both women and Natives in his show making him the famous American in the World. 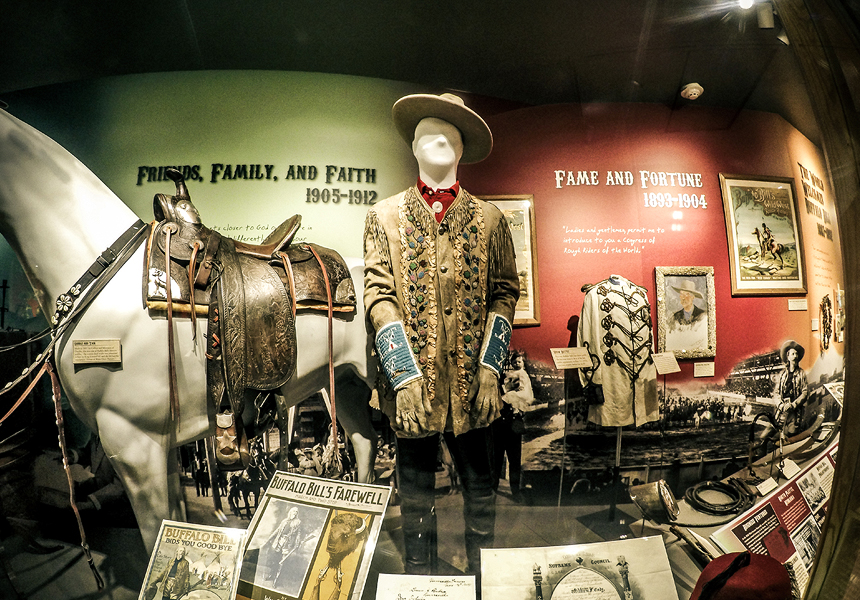 William F Cody was born February 26, 1846 just west of the Mississippi River near Le Claire, Iowa. At the spry old age of 12, he started working for a wagon train headed west toward Fort Laramie, Wyoming. The very next year he traveled to Colorado to participate in its newly founded gold rush. Just a few years more, when he turned 15, Cody began working for the Pony Express. Towards the end of the Civil War, Cody served as a scout in the Union Army’s Seventh Kansas Cavalry, where his skills and experiences as a tracker and fighter made him invaluable. On April 26, 1862, William F Cody was awarded the U.S. Congressional Medal of Honor for valor shown by him during the Indian Wars. In a weird series of events, Cody was later declared ineligible and had his medal removed in 1917, only to have it later reinstated in 1989.

It didn’t take long for higher ups in the military to realize the media potential of Cody, who had a combination of charisma and first-hand knowledge and expertise in frontier life. U.S. Army General Philip Sheridan capitalized upon this as a chance to give the Army of the West some much needed good publicity. During this same time, American media was filled with cheap magazines that romanticized the exploits of both good guy and bad guy, generally cowboys and soldiers versus that of the Natives, often exaggerating tales from both sides. Buffalo Bill found himself as one of the most famous characters and in 1872 was convinced to portray himself on stage. After returning to the Army during the height of Indian resistance in the Plains, and after scalping a Cheyenne warrior shortly after Custer’s “Last Stand” all while wearing his stage clothes, Buffalo Bill proved that he was the real deal and no mere actor.

In 1883, Cody created what would become the world famous “Buffalo Bill’s Wild West,” a staged show with authentic characters and weaponry from the days of western expansion. Cody’s show was truly world-wide, performing from California to Maine, all the way to Wales and Ukraine. Cody’s Buffalo Bill show would be performed all over the world for over 30 years. Despite his great success as performer, William F Cody died January 10, 1917, broke and penniless.