In October of 2015, the new bridge into Coonskin Park was officially named the West Virginia Air National Guard 167th Fighter Squadron Memorial Bridge in memory of the 21 WVANG members who were killed in 1951 in a C-47 crash. The bridge cost $6.2 million dollars and is approximately 472 feet long. The former entrance to the park was a road adjacent to the McLaughlin Air National Guard Base and created a security issue. Thanks to the bipartisan effort of the state, federal and county partners, the WVANG employees will now have a more secure future. Additionally, the new bridge has increased safety, allowing people to access the park directly in to the main part of the park instead of driving through picnic areas and playgrounds.

There is a cement plaque located next to the West Virginia Air National Guard 167th Fighter Squadron Memorial Bridge. It reads, “For God that all men might be free to follow for country that the American way of life might be preserved these men gave their lives.” Additionally, the plaque lists the members who were killed in April of 1951. 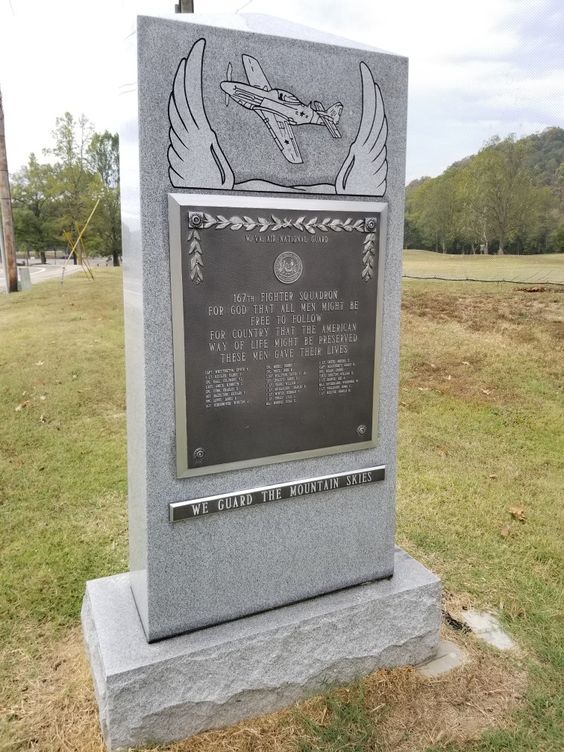 The fourth stanza of Ralph Waldo Emerson’s “Concord Hymn” is written on the back of the cement plaque: “Spirit, that made those heroes dare To die, and leave their children free, Bid Time and Nature gently spare The shaft we raise to them and thee.” This poem historically refers to the Battle of Lexington and Concord during the Revolutionary War. The fourth stanza is asking people to preserve their monument and keep it safe for generations so this war will always be remembered. Likewise, we shall never forget the courageous men, the Coonskin-Boys, that died in April 1951. 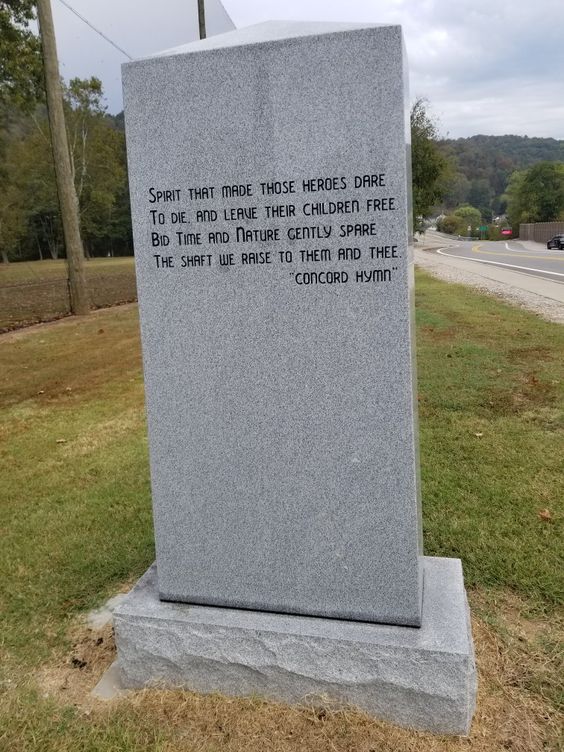 In April 1951, a double tragedy struck the 167th Fighter Squadron. During a training mission, Major Woodford W. “Jock” Sutherland had just landed his P-51 Mustang near Eglin Air Force Base, FL, when he was hit head-on by another Mustang. The abrupt impact threw Sutherland forward and his head hit the windscreen, killing him instantly. His body was returned to Charleston, WV for his funeral.

Two C-47s loaded with 167th personnel were flying home from Godman Air Force Base in Kentucky to attend their brother’s funeral when the second tragedy occurred. On April 8, 1951, C-47 aircraft number 6004, piloted by Captain Edward K. Whittington, crashed into a hillside approximately four miles short of the Kanawha Airport runway. Nineteen men died on impact in the fiery crash and two died in the hospital due to severe burns and massive injuries.

The reason for the crash is still unknown. Visibility was limited around Kanawha airport due to heavy fog; however, the pilot knew the terrain very well. Additionally, investigators determined that both engines were running perfectly at the time of the crash. To make folks wonder even more, the overhead cockpit-escape hatch was found a mile and a half back on the flight path from the crash site.

As investigator kept searching for an answer, they discovered a site at the top of the mountain that contained a magnetic field that could cause false instrument readings while on approach. As a result of these findings, the mountain was cut down; therefore, removing possible cause for a future accident.

There is a cement plaque located next to the West Virginia Air National Guard 167th Fighter Squadron Memorial Bridge. It reads, “For God that all men might be free to follow for country that the American way of life might be preserved these men gave their lives.” Additionally, the plaque lists the members who were killed in April of 1951:

May these men never be forgotten.