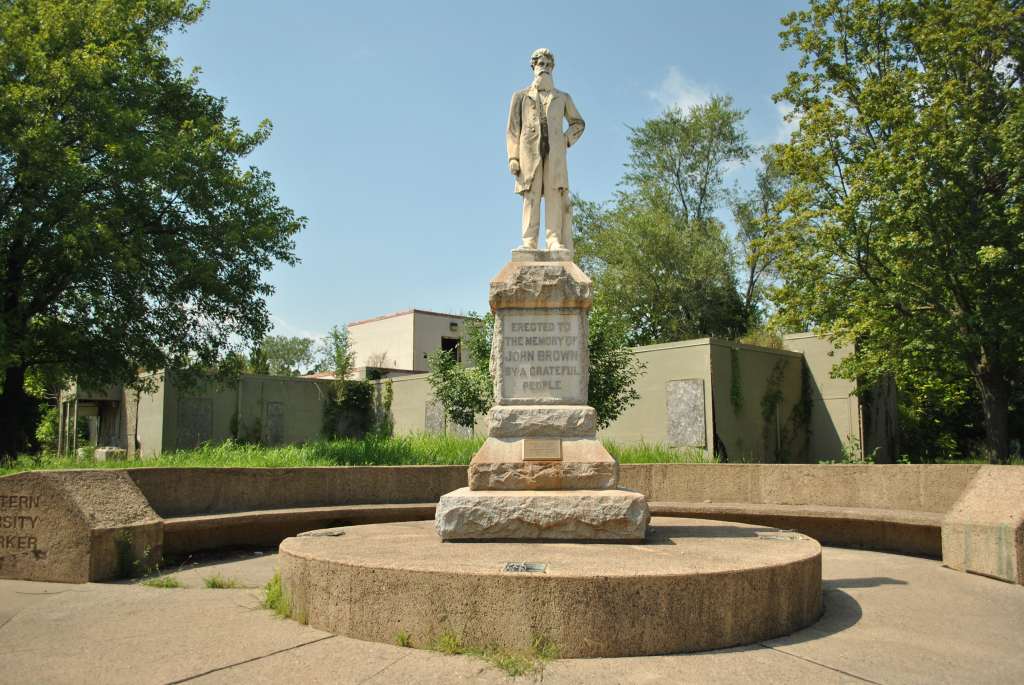 John Brown, around the time he lived in Kansas Territory 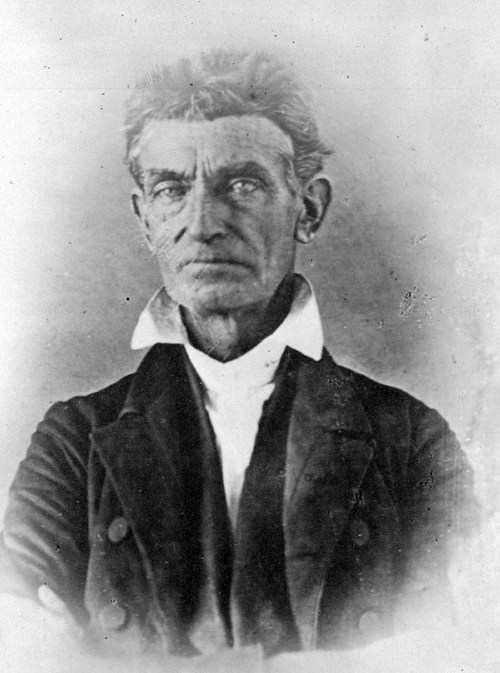 Cabin owned by John Brown's relatives, where he lived when he moved to Kansas Territory and organized his campaigns. The cabin is now located in the John Brown Memorial Park in Osawatomie. 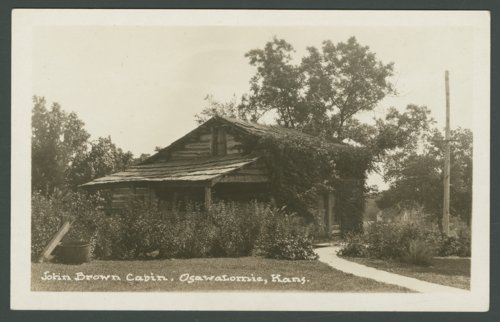 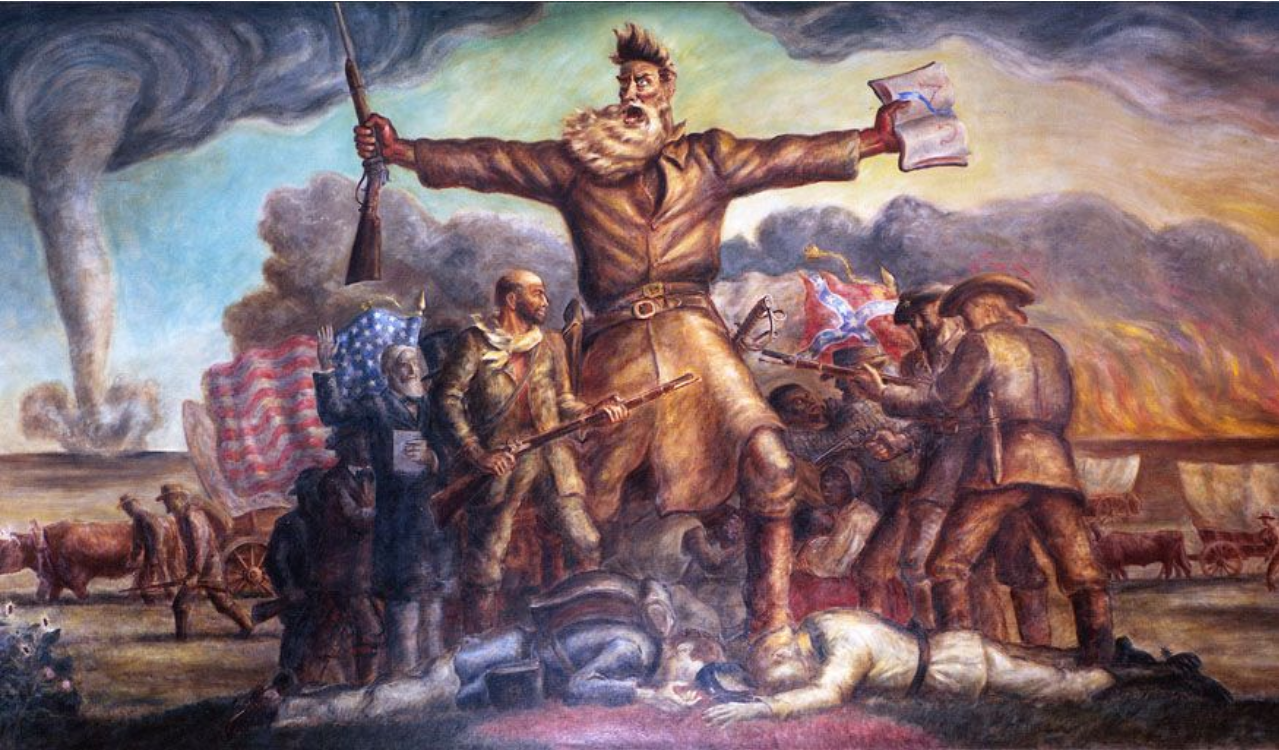 An anti-slavery meeting scheduled for December 2, 1859, the day John Brown would be executed 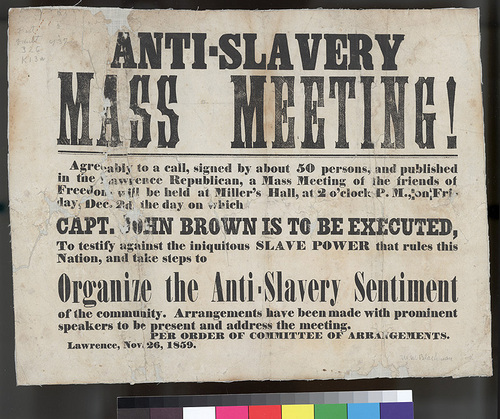 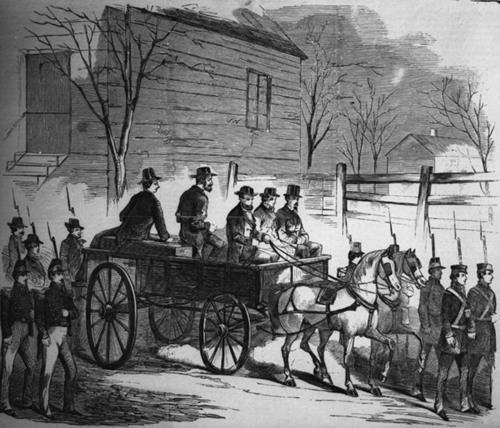 John Brown was born May 9, 1800 in Torrington, Connecticut. Many of his beliefs had been instilled in him at a young age by his parents, Owen and Ruth Brown, who were devout Calvinists and believed deeply in the immorality of slavery. As a young man, John Brown would frequently uproot his own large family (he would have 20 children in total), moving around to join various abolitionist communities in Pennsylvania, Ohio, Massachusetts, and New York. He worked as a conductor on the Underground Railroad. In 1855, Brown moved to Kansas Territory along with four of his sons in order to lead a campaign to ensure that Kansas would become a Free State. [1,2,3]

Led by one of John Brown’s sons, a group called the Pottawatomie Rifles organized in order to provide armed resistance to “Border Ruffians”, that is, slavery sympathizers who were crossing the border from Missouri in order to terrorize Free State settlers. Brown and his supporters were spurred on by the sacking of Lawrence, Kansas in the spring of 1856, when pro-slavery mob, led by a local sheriff, attacked various businesses in the town. In response, on May 24-25, members of the Pottawatomie Rifles went to the homes of slavery sympathizers and killed five men. Most historians agree that John Brown himself led the attack, although he was not officially part of the group.[1]

In June and August, Brown led a group to defend the Free State settlements of Black Jack and Osawatomie from raiding by Border Ruffians. Although one of his sons was killed during the Battle of Osawatomie, John Brown earned national notoriety from the defense, earning him the nickname “Osowatomie Brown.” [1] By the fall of 1856, Brown left Kansas in order to raise funds in the North, and he continued his campaigns throughout the US. Most famously, in July 1859, he led the attack on a federal arms arsenal by 22 anti-slavery fighters at Harpers Ferry, Virginia. He was subsequently tried and sentenced to death, becoming the first person to be hanged for treason since the founding of the US. [4] Before his death, Brown prophetically declared that the issue of slavery would not end with his death: “You may dispose of me very easily. I am nearly disposed of now. But this question is still to be settled—this Negro question, I mean; the end of that is not yet.” [4] Indeed, the guerilla skirmishes between Free State and Slave State supporters in Kansas, as well as Brown’s raid on Harpers Ferry have been cited as catalysts leading up to the Civil War. [2]

John Brown’s public image is still controversial today. For nearly a century, history textbooks in the US used various words like “insane”, “deranged”, “crackbrained”, and at the very least, “fanatical” to describe Brown. [4] Even those who admired his noble cause sometimes questioned his methods. However, he was highly admired by many of his contemporaries, white and black alike, including other famous black civil rights defenders such as Frederick Douglass and Harriet Tubman.

Western University, one of the preeminent black colleges of its time, erected a statue to John Brown in 1911. While most of the rest of the campus has been razed or degraded over time, the statue remains today. Its inscription reads “Erected to the memory of John Brown by a grateful people”, an indication of his status amongst African Americans as a respected early defender of black rights.