The USS Wisconsin was launched on Dec. 7, 1943--the second anniversary of the Pearl Harbor bombing. An Iowa-class "fast battleship," she served during World War 2, the Korean War, and Operation Desert Storm. Since being decommissioned in 1991, as one of the last serving battleships in the world, the vessel has served as a floating museum. The current exhibition in Norfolk was opened in April 2001 within the science and technology museum Nauticus.

Aerial view of the Wisconsin at sea. 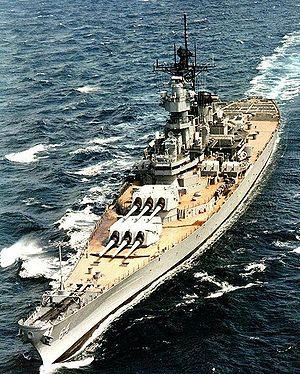 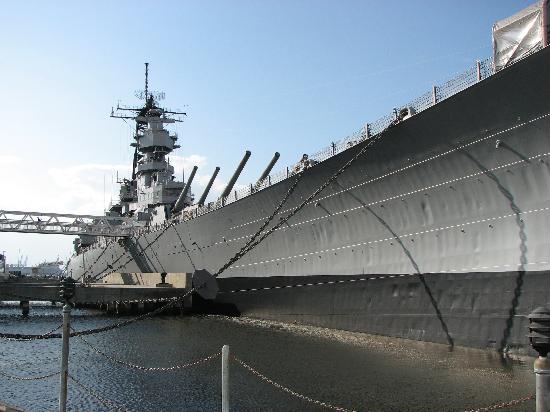 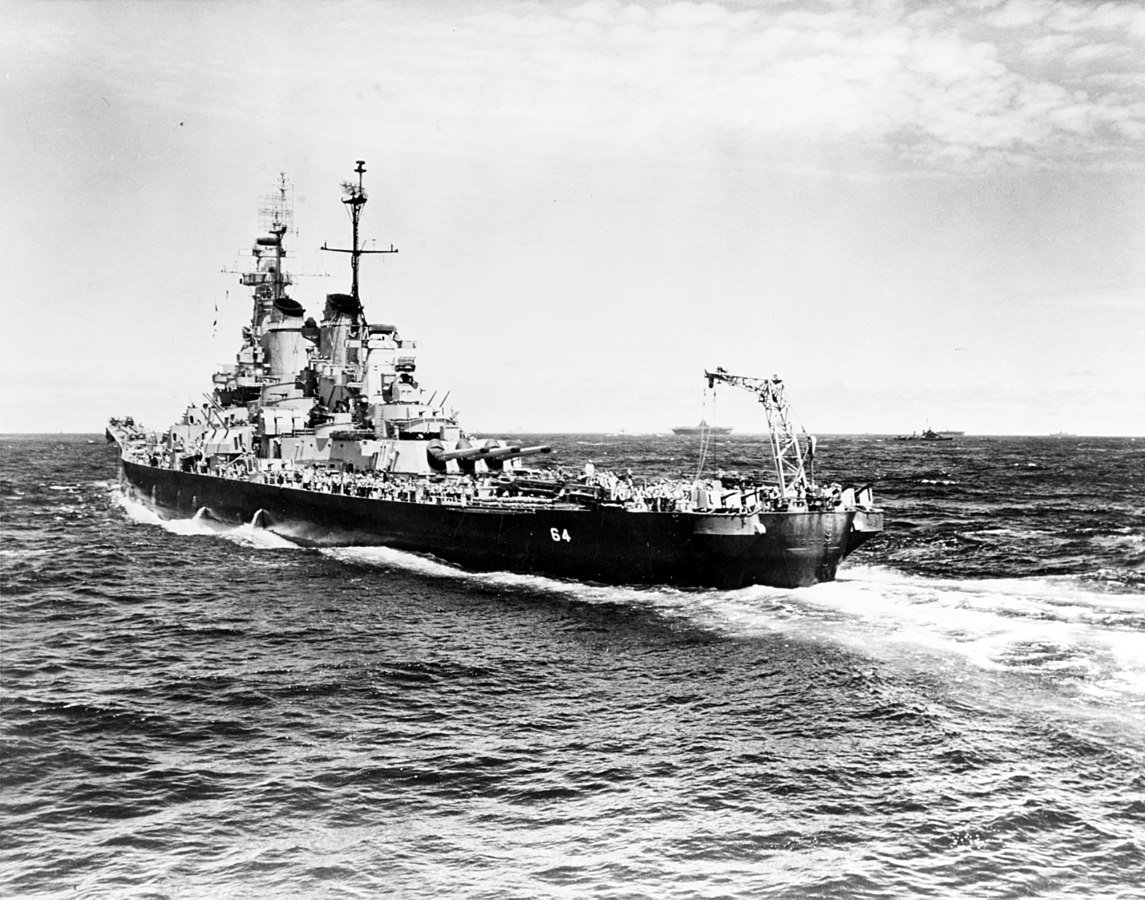 Wisconsin docked in Pearl Harbor on en-route to join the Pacific Fleet in 1944. She is pictured alongside the hulk of the USS Oklahoma, which was destroyed in the Japanese attack in 1941. 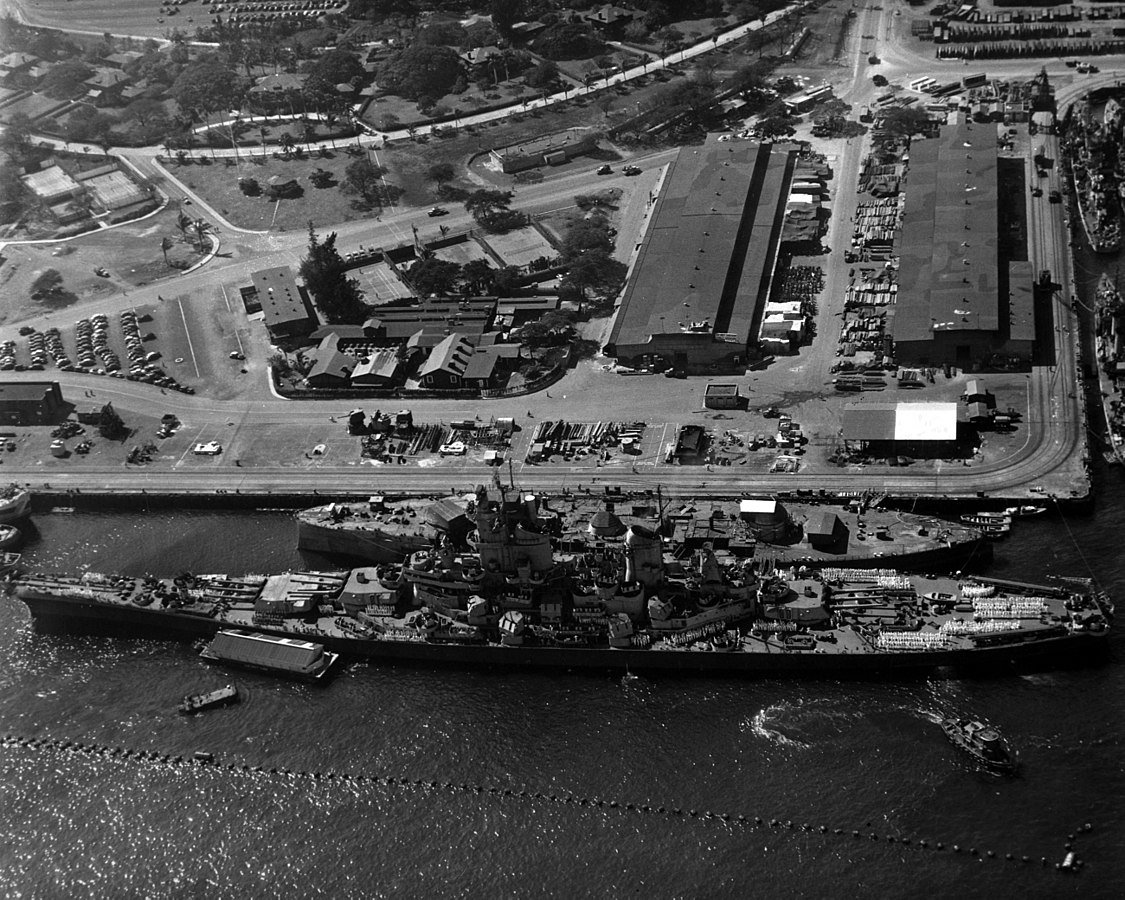 Crewman Bob Eisenberg on board the USS Wisconsin with General Norman Schwarzkopf, who commanded the allied forces during Operation Desert Storm. Photo courtesy of USSWisconsin.org. 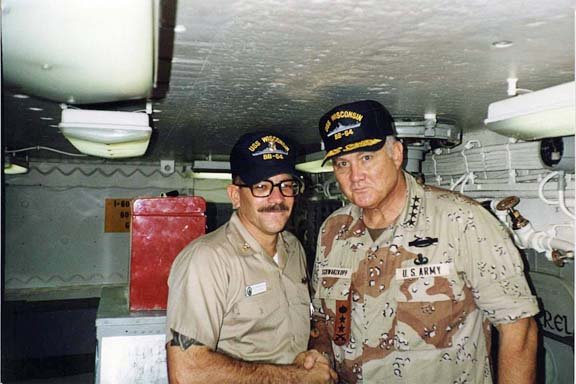 Crewman Steve Kuechle on board the USS Wisconsin with actor-comedian Steve Martin. Photo courtesy of USSWisconsin.org. 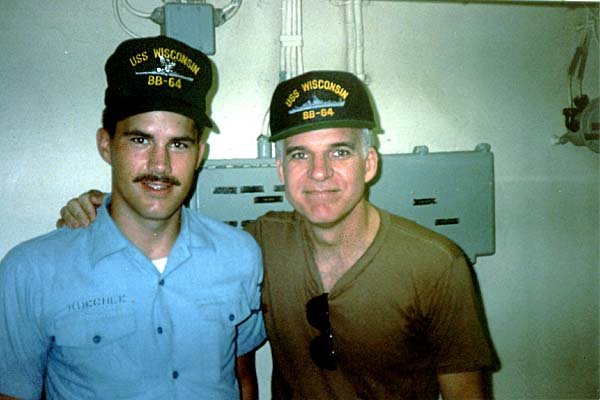 Wisconsin at her berth alongside the Nauticus Museum. Photo courtesy of Dr. Mark Fulton and USSWisconsin.org. 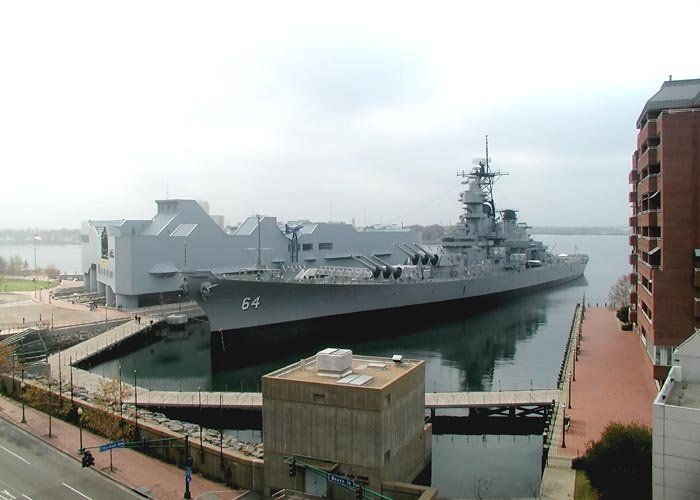 A US Navy RQ-2a Pioneer unmanned reconnaissance "drone," of the type used by the USS Wisconsin during the Persian Gulf War. 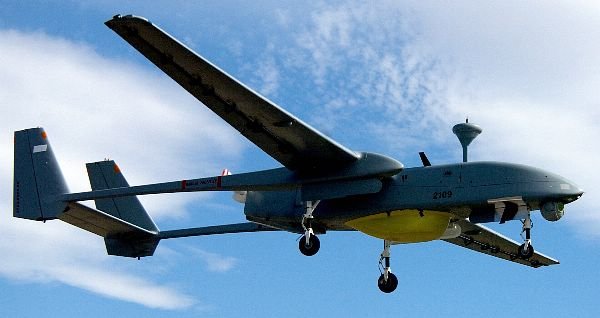 Nighttime gunfire from USS Wisconsin during action in the Persian Gulf. 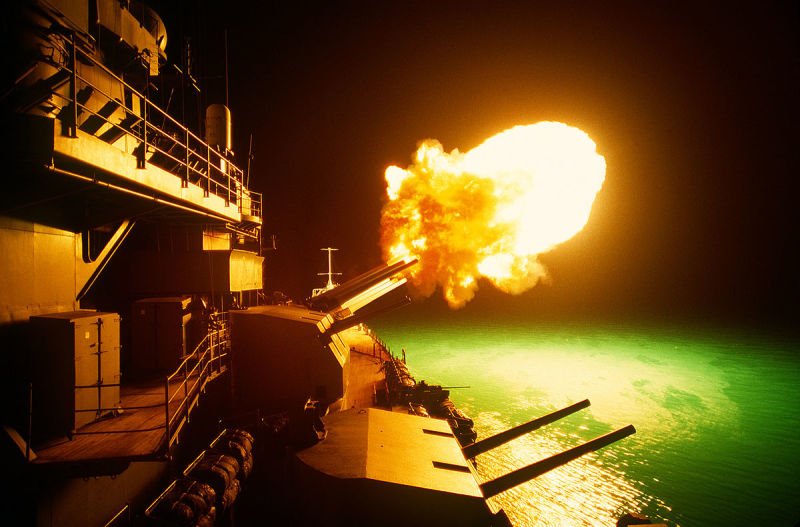 Like the USS Iowa, for which this unique class of "fast battleships" is named, construction of the USS Wisconsin was approved before the United States' entry into World War II. The ship was built in Philadelphia Naval Yard, and launched from there on December 7, 1943, two years to the day after the Japanese surprise attack on Pearl Harbor.

She would not be commissioned until April 16, 1944, and following sea trials and her shakedown cruise, she did not reach the Allied Pacific Fleet until October 1944. While serving with the US 3rd Fleet, she served to protect aircraft carriers and bombard shore targets in the Philippines, French Indochina, and islands in the Pacific Theater.

Notable during this time was Tropical Storm Cobra, which caught part of the 3rd Fleet at sea near the Philippines in December 1944. Though Wisconsin herself only suffered two injured sailors and proved her seaworthiness, her task force suffered over 700 men killed and over 100 aircraft destroyed or damaged--in addition to the loss of three destroyers, which sank with nearly all hands.

In February 1945, Wisconsin joined the US 5th Fleet, participating in bombardments of Japanese coastal cities, and supporting the amphibious landings at Iwo Jima and Okinawa. She was part of the defensive screen protecting American aircraft carriers from kamikaze strikes at Okinawa.

Wisconsin was mothballed soon after the Japanese surrender ended World War II, but reactivated only a few short years later when the Korean War broke out. By December 1951, she was recommissioned and back in action off the coast of Korea as the flagship of the US 7th Fleet. As North Korea possessed no navy to speak of during the conflict, Wisconsin's combat duties were comprised almost exclusively of supporting bombardment against onshore targets such as enemy bunkers, fortifications, command posts and artillery batteries.  From a December 17, 1951 clipping in Time Magazine entitled "Scratch One T-34 [tank]:"

“Hitting a tank with a 16-in. shell from a battleship’s main battery is something like potting a mouse with an elephant gun. It isn’t often done–but when it is, there isn’t much left of the mouse."

After the Korean War, the ship stayed active as a training vessel--though she was damaged in an accident during a 1956 training cruise off the Virginia coast, when she collided with the destroyer USS Eaton in a heavy fog. She was decommissioned in 1958, marking the first time the United States was without an active-service battleship since 1895.

REACTIVATION and the GULF WAR

That changed when she was reactivated in 1986, as part of the same 600-ship Cold War navy plan that resurrected the USS Iowa. The ship was modernized and updated, most of her WW2-era antiaircraft guns being replaced with anti-missile batteries and Tomahawk Cruise Missile launchers.  Her reconnaissance plane was replaced with an Unmanned Aerial Vehicle (UAV), commonly called a "drone."

Though never deployed against the Soviet Union, she participated in Operation Desert Storm in 1991, where her supporting fire became the first combat use of a drone by U.S. forces.  While unmanned reconnaissance drones been used in previous wars, this was the first time one was utilized to direct the gunfire of a U.S. warship in real-time on the battlefield. The UAV acted as a spotter to direct Wisconsin's fire support, destroying an Iraqi artillery battery 19 miles away.

On February 23, 1991, in one of the most widely publicized episodes of the Gulf War, Iraqi troops occupying Faylaka Island surrendered to the USS Wisconsin's reconnaissance drone.  The drone pilot had been instructed to fly low over enemy defensive positions and Iraqi troops, who by now were aware that the drone's distinctive noise presaged a battleship's heavy bombardment, hoisted white flags of surrender.

When she fired the shots of the final naval gunfire support mission of the Gulf War, Wisconsin became the last battleship in the world to see action.

PRESENT DAY
The US Navy transferred ownership of the vessel to the city of Norfolk, Virginia in 2010.The ship currently resides there at the Nauticus Museum, where it serves as a floating museum and is listed in the National Register of Historic Places.