Located in the historic Carnegie Free Library building, the Morris Graves Museum of Art showcases art created locally, in the northwest, and from around the world. The museum features changing exhibitions and a permanent collection primarily comprised of works of art by the museum's namesake, Morris Graves (1910-2001). The Humboldt County Arts Council operates the museum, which opened in the old building on January 1, 2000. As for the building itself, it was built in 1904 and is a fine example of Classical Revival architecture. The exterior features a large portico with two-story tall Corinthian columns and a terra cotta Roman arch. Inside, the building features a mosaic floor and solid redwood Ionic columns. The building is also significant for its association with the man for whom it is named, Andrew Carnegie, one of the richest people in the world of the late 19th and early 20th centuries who donated money to help build libraries around the country.

The Morris Graves Museum of Art, formerly the Carnegie Free Library, presents art created locally, regionally, and from around the world. 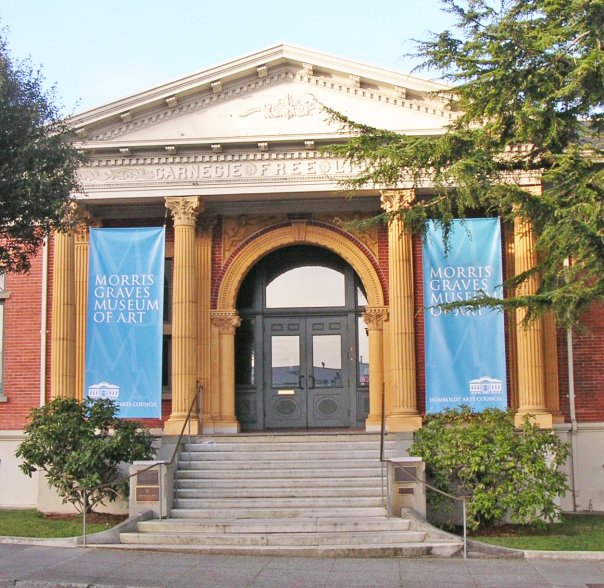 The city established its first library, called the Eureka Free Library, in 1878. It was initially located in rented rooms. The idea to request funds to build the present building originated with a local pastor named Rev. J.H. Wythe, Jr., who suggested the idea to the Humboldt County Chamber of Commerce, which wrote a letter to Carnegie requesting funds. He agreed to donate $20,000 if the city promised to find a site and support the library (local residents donated money as well). The library operated until 1972, although it continued to house the library's administrative services for some time. By the mid-1990s, the library was under threat of demolition but the city and the Humboldt Arts Council worked together to save and restore it. It was added to the National Register of Historic Places in 1986.